I'M In Love With This 1300-Year-Old Indian Temple, And Here'S Why You Should Also Visit It!

I'm In Love With This 1300-year-old Indian Temple, And Here's Why You Should Also Visit It!

Shruthi Sundaram: The main hall of the temple

This Shiva Temple in South India truly mesmerized me and I bet you'd love it too!

My family has been obsessed with temples from the time I can remember. I fondly recall being dragged into my mother's temple-hopping sprees multiple times a year, where they ended up being our only form of vacation. My earliest memories also involve my father dragging me into these shrines because I was adamant about doing something else. Anything else!

Like many children, I failed to appreciate my surroundings and got bored quickly. But as I grew up, I began to understand their importance and appreciate them for their marvelous architecture, history, and the mental peace I got from my culture's place of worship.

I still hate going into the crowded temples of India (trust me, there are tons of them). But, I love the occasional empty places of worship that allow me to appreciate my surroundings to the full extent. And this 1300-year-old Shiva temple in Vellore, Tamil Nadu, India, was one of them.

Shruthi Sundaram: The main stupa of the temple 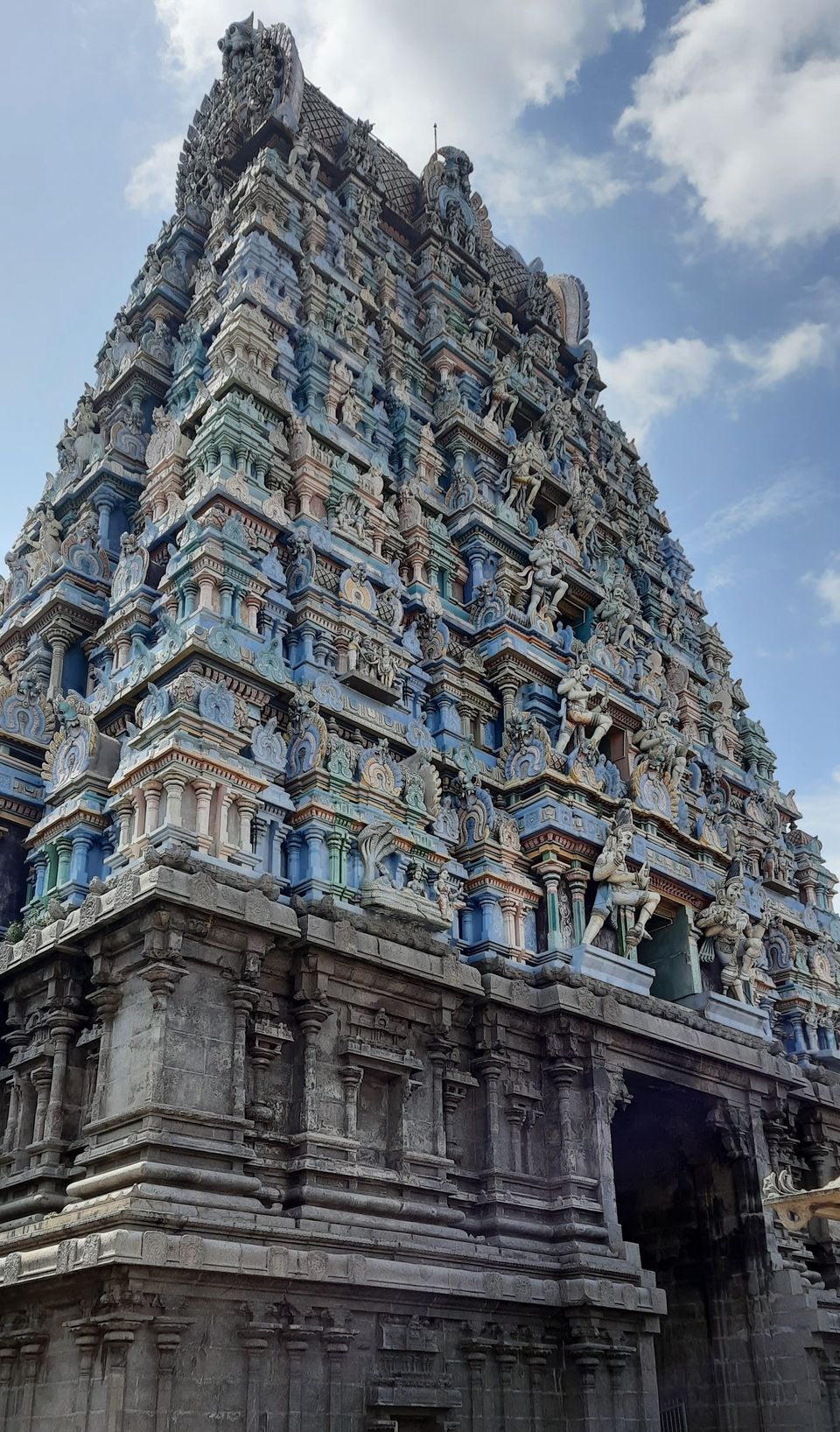 Known for its impressive architecture, grand stupas & sculptures, and lush greenery around it, the Margabandeeshwarar Koil (temple in Tamil), does have an awe-inspiring effect on its onlookers. Lord Shiva's form here is Margabandheeshwarar — Marga in Sanskrit is direction, Bandhu means friend, so the Lord is said to be a friend who shows the direction to his devotees. The Goddesses' name is Margathavalli.

**There are multiple forms of Lord Shiva (one of the three main gods of Hinduism) and Parvati (his wife) throughout the temples of the country. Each form has a separate name and is known for different reasons.

The deity is a Swayambumurthy (self-manifested) in leaning form where the Lord's head is slightly tilted to the right.

The temple is famous for its compound wall (Madhilazhagu) and exquisite minute stone carvings throughout.

As soon as you enter the temple, you're greeted by the grand stupa in all its splendor. The Rajagopuram (main stupa) is 110 feet tall and faces the east. Before the sanctum sanctorum, there is a massive dance hall (the cover photo), with an impressive Nandi (Lord Shiva's guardian deity) built before the Lord. Intricately carved pillars fill the main hall.

The temple is said to be built by generations of kings starting from Rajaraja Chola(985–1014 AD), who have contributed in their own ways to the temple. With multiple holy books describing it in their religious texts, the shrine is one of the biggest in the Vellore district.

Shruthi Sundaram: View from next to the goddess's shrine

History and story of the temple:

Lord Brahma (the first of the three main gods of Hinduism) is said to have gotten cursed by Lord Shiva for falsely stating that he had seen Shiva's head. And as an effect of the curse, Brahma was forced to take upon a human form as a priest's son in the small town of Virinjipuram.

After losing his father at a young age, the small boy was forced to work and feed his family by taking up temple duties. The child got his upanyayanam (thread ceremony) done by Lord Vishnu himself in front of the Selva Vinayagar Sannidhi (another name for Lord Ganesh, who is Lord Shiva's son)

Since the child was too small compared to the height of Lord Shiva's Lingam, it is said that the Lord mercifully bent his head to help the child in the North-East direction. And once this happened, Lord Brahma was relieved from his curse and was allowed to go back to his godly form.

There are multiple other stories associated with the temple. For example, the Lord saves a merchant from dacoits who loot him and accompanies him to safety(thus the name Margabandeeswarar), stories around the Lord protecting against black magic, etc.

The shrine is famous for young Brahmins (a sect of Hindus) coming and having their thread ceremony here during the November-December period. You can also witness the 10-day Brahmotsavam festival with the flag hoisting ceremony where the deity is taken on a procession around the temple during the Indian month of Panguni (March-April).

Shruthi Sundaram: The mini stupas through which celestial beings are known to enter

Some interesting points to note:

- Every major temple in India has a sthala vriksham (main tree), which is the Palm tree in this case. A unique aspect of it is that it gives fruits in black one year and white the following year.

- It is one of the few shrines to have two sthala vrikshams — one for the deity and one for the goddess.

- The temple has even more sacred significance since Celestial beings and other Gods are said to enter the temple at night through the "gopurams" (stupas) embedded on the sides of the temple. These entrances are still maintained exclusively for the holy beings, and humans cannot enter through them.

- There is a myth associated with the temple that there is a secret pathway from the shrine to the nearby Vellore port. It's believed that the path was used in times of war for security purposes and to escort women and children away from the main scene.

- I went with my husband and father there from Bangalore via car. As we started early in the morning (5 am), we reached there by 9.

- Bus facilities are available from Vellore for devotees to comfortably reach the temple.

- Nearby railway station: Kadapadi and Vellore

The temple is one of the most peaceful ones I have been in for a long time. There is something about the vibrations in a Shiva temple that calms you down completely. Thus, it became a perfect spot to meditate since we reached the place in the morning. Also, the strong vibrations of the priest's chantings in the nearly empty temple is not an experience to miss.

The stories mentioned above are called the Sthala puranam of the temple. All the priests present there explained the shrine's history with a passion that you can hardly find nowadays. You can also find the sthala puranam written in detail on boards placed on the front.

Like many others, the temple is also suffering due to the pandemic with a lack of funds. But hopefully, things will get back to normal once places start opening up.

The temple will take a good 2 to 3 hours to patiently visit since the praharams (parallel compounds around the shrine) are enormous. Throughout, you can witness multiple stone carvings, which will truly make you wonder about the olden times of India. However, we got a pleasant surprise in between when we saw a goshala (home for cows) set up in one of the temple corners. The animals were lying down peacefully in the afternoon sun, not minding any visitors.

It's a must-visit place if you're looking to learn more about South Indian history and want to experience a sense of peace that you cannot find anywhere else.