Myanmar - A Nation In Transition 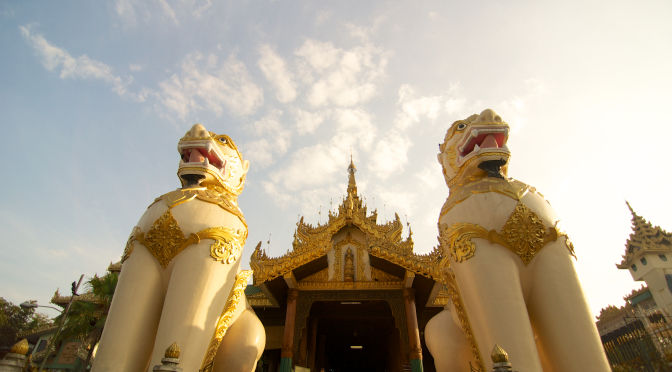 (Note: I had traveled to Yangon, Myanmar, to participate in a program called TechCamp between Jan 14-16, 2014. These are put together based on my observations as a tourist, discussions with people on the street and with participants at TechCamp. The viewpoint will be limited by this constraint)

I had only heard of Myanmar, but when I go the invite to visit it, I didn’t know what to make of the place. I knew they had decades of military rule by the junta, and Aung San Suu Kyi had managed to press for a democratic process in the near future. The transition wasn’t complete, and I fully expected a rather hostile military presence that was forced to concede their control over the way things were run.

Though Myanmar and India are neighbours, there have not been steady diplomatic relations between us. I was curious as to how they would see Indians – with friendship, wariness or suspicion.

I got talking to a guy from BBC on the flight to Yangon. He was helping their fledgling media learn about international standards in reporting, as well as setting up an independent media channel.

I had fully expected a thorough questioning at immigration on my motives to enter Myanmar. I had prepared mentally for being handed a list of things I could/couldn’t do, places I couldn’t visit and areas I could not photograph.

In reality, it was a pleasant surprise. Immigration was quick and document inspection was cursory. There was a taxi counter and money changers just outside, and I was out of the airport within 20 minutes of landing.

Myanmar is at an interesting point today. The first general elections are to be held in 2015, and they are framing a revised constitution currently. They discarded the earlier one, and are grappling with issues of not having a framed constitution in the interim. For instance, there is no telecom policy yet, but sensing that mobiles are crucial, the government has allowed a couple of firms to setup networks. Till sometime back, it cost close to USD200 to get a SIM card. Now, pre-paid cards are also available at USD25 but still mainly in cities. Smartphones abound in Yangon, with many of the young using WiFi to get their fix of Facebook.

Land records are another point of debate. In the earlier regime, land records were at best approximate. Myanmar wants to use GIS systems to setup proper land records, but they are faced with the problem of reconciling ownership based on old claims. It literally is a country in transition.

At first sight, Yangon seemed like any other city. As a reminder of the change, a huge hoarding advertising an LG phone welcomed those leaving the airport. However, it was apparent that this was an aberration. Most hoardings advertised various concoctions of multi-vitamins showing young models (fully clothed) energised by having them.

Something seemed out of place as we drove down. In India, the driver sits at the right of the car and we drive on the left side. In the US it is the other way. In Myanmar, the driver sits at the right of the car, but drives on the right side. This means he is further away from the centre of the road and theoretically increases the risk of accidents with oncoming traffic. (I later learnt that most vehicles were imported in the 50s and 60s, and later only over the last two years. These were usually second-hand cars, and most owners went for budget models without considering whether they were right-hand or left-hand drive)

I kept looking out for military presence, but in all the days I was there, I didn’t see any overt display of power. Someone later told me that there never had been a strong military presence on the ground. The junta had kept control by having a network of informers.

I reached Saturday afternoon, so had a couple of days to walk around town before the event. On the first day, I visited Shwedagon Pagoda, the largest pagoda in Myanmar, situated in downtown Yangon. Property prices have been on a rise since the announcement that the military was ceding control. Sensing opportunity, many large firms are trying to establish presence here. Downtown property prices are anecdotally as high as New York.

At Shwedagon, I sat admiring the architecture when a Buddhist monk came to sit by me. Like others, he had a shaved head and wore ochre robes. We got talking about the changes at Myanmar. After a long discussion, he finally asked, “Are you on Facebook?” We added each other as Facebook friends and went our different ways.

TechCamp itself was held at the MICT conference hall with over 150 local participants. Since many did not know English, we were each assigned a translator. I met Jovan, a kid who had just finished 10th grade and had volunteered to help me with translation. He was keen on writing the SAT the coming year and study abroad.

I quickly noticed that brevity was not a virtue in Burmese. Whatever I said, Jovan would take a long time to explain that in Burmese. I later found out that in Burmese, it was customary to repeat the same sentence in two different tenses during any conversation. No wonder it took so long to get a point across!

Towards the end, Jovan turned to me – they are asking if the story telling is similar to what gets told in school?

It turns out that in Myanmar, stories were associated with what teachers used to instruct kids. All through the initial session, people were trying hard to fathom why I was talking of stories when we clearly weren’t in school mode!

During the first session, I sat with a group of about 15 people, working on basics of marketing and funding. It was amazing listening to some of the work that the NGOs were doing. I met a guy who’s organisation had planted over 3000 trees in the last two years, and who wanted funds to plant 5000 more in the coming three years. They would plant trees in school compounds and hospitals; trees like teak that these organisations could cut and sell in a few years if they needed money.

Another was struggling to help students prepare for competitive exams. The general agreement was that there had not been enough focus on keeping education to international standards during the military rule. Students were not able to cope with international exams if/when they applied to outside universities. Myanmar was also facing a huge shortage of skilled labor. To alleviate this, some organisations were working on translating Khan Academy lectures in Burmese. Others were working on setting up WiFi networks in colleges to help more people get online.

Since I had time, I ended up speaking to a lot of participants.

The intensity of what’s happening on ground is amazing. Almost everyone is aware of the upcoming elections, but viewpoints about the same are varied. Some worry that the military government will stoke fights between the Buddhist majority and Muslim minority to divert people’s attention. Others believe democracy will be a panacea. Yet others are working on hard on educating a population that hasn’t voted in a generation on the basis of elections: why you should vote, how do you identify candidates, what basis should you vote, etc. Some felt the transition process was too slow and the military should have stepped out even faster.

I ended up having long discussions on democracy with many participants. It may not be the quickest form, but it was better things were moving gradually than have a flash like the Arab Spring with no concrete outcome. Many were curious how democracy worked in a country like India. My answer: noisy, chaotic, but it works! It’s gotten us this far, and I strongly believe it is the best form of governance we have, despite its shortcomings.

Many had concerns on the near future: how to fix land issues, get more tourists to visit and generate employment, invest in skill building, exploit technology, etc.

No matter what, I will be watching Myanmar closely till the 2015 elections. I wish the transition happens smoothly. The world needs such an example.

This trip was first published on https://talesnap.wordpress.com/.