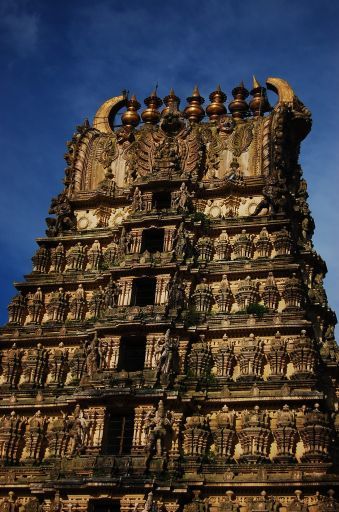 We made the trip to Mysore around March 2010. Mysore is the capital city of Wodeyar dynasty who ruled the kingdom of Mysore until 1947. Prior to Wodeyar dynasty, Mysore was under the regime of Haider Ali and his son Tipu Sultan for 40 years. With a rich cultural and historical heritage, Mysore has a quaint charm that appeals tourists from all over the country.Only at 19 kilometers distance from Mysore stands Srirangapatna which was the de facto capital of Mysore during the rule of Tipu Sultan and Haider Ali. Now a small town, Srirangapatna takes pride in the palaces, forts and mosques dating back to the era of Tipu Sultan. The first place coming to our notice once we entered Srirangapatna was a memorial established in reminiscence of Tipu. There was a plaque at the centre of the memorial ground carved with the words "The body of Tipu Sultan was found here."

The Ranganathaswamy temple in Srirangapatna is a sanctum of Lord Vishnu as Ranganatha. Built in 894 AD by a Ganga chieftain Tirumalaraya, this temple went through a multitude of renovations during the reign of successive rulers of Mysore including Hoysalas, Vijayanagara monarchs, Wodeyars and Haider Ali. The avenue leading to the shrine is dotted on both sides with makeshift stalls selling varieties of artefacts and handicrafts.

The summer palace of Tipu Sultan renowned as 'Dariya Daulat Bagh' is one of the popular attractions in Srirangapatna.A paradigm of Indo-Islamic architecture, the palace was constituted of teak way back in the 18th century. Set amidst well-spruced lawn and flowerbeds, the inner walls and ceilings of the palace are embellished with rich oil paintings depicting the victories of Haider Ali and Tipu over the British force. On the top floor of the palace is a museum showcasing a set of memorabilia connected with Tipu and Haider.Photography inside the palace is prohibited, though we managed to sneak some pics.

One of the oldest churches in Mysore is St. Philomena's Church. Over 200 years old, the church was originally a small church which was later expanded by the king Wodeyar III. Upon Mysore city conferred with the honour of capital city of Mysore, Christian population surged in the city evoking the need for a larger church and hence the foundation for St. Philomena's Church was laid. Built in Gothic fashion, the church is, undisputably, a visual delight.

In the heart of the city of Mysore is located one of the most fascinating and imposing architectures, Mysore Palace. It looks all the more ravishing when illuminated at night on Sundays or during the days of festivals. Over a century old, this palace is a perfect blend of Hindu and Islamic architectural style. While the exterior of the Palace with its domical construction resembles Muslim architecture, the interior of the palace is dominated by the norm of Hindu architecture. The palace was demolished on a massive scale by Tipu Sultan in 1787 and when restored back to its erstwhile glory years later in 1803, it suffered a catastrophe, a fire in 1897 during the wedding of princess Jayalakshmanni. Photography inside the palace is prohibited and hence, one needs to deposit the camera at the gate with the security before entering the palace.

Only at 13 kms distance from Mysore city is situated the famous Chamundeshwari Temple atop the Chamundi hill. There is a flight of 1000 steps leading you from the bottom of the hill to the temple at an altitude of 3,000 feet. You may also travel via the motorway. We covered almost 80% of the distance by car and clambered up the remaining 20%. The shrine is an attractive quadrangular structure designed in Dravidian fashion with seven storied tall tower adorned with beautiful engravings.

Brindavan Gardens, located barely 20 kms away from Mysore, is the next attraction we paid a visit to. It's a beautiful garden built alongside a dam across Cauvary river. The terraced lawn and the illuminated dancing, twirling fountains have enhanced the beauty of the garden which has been used as a backdrop for many Indian movies. The Musical fountains dancing and grooving with the beat of music are truly delightful.

Finally, on a pleasant note we wrapped up our journey in a truly South Indian way by having our dinner at an authentic South Indian restaurant named "Kamath" on our way back to Bangalore.