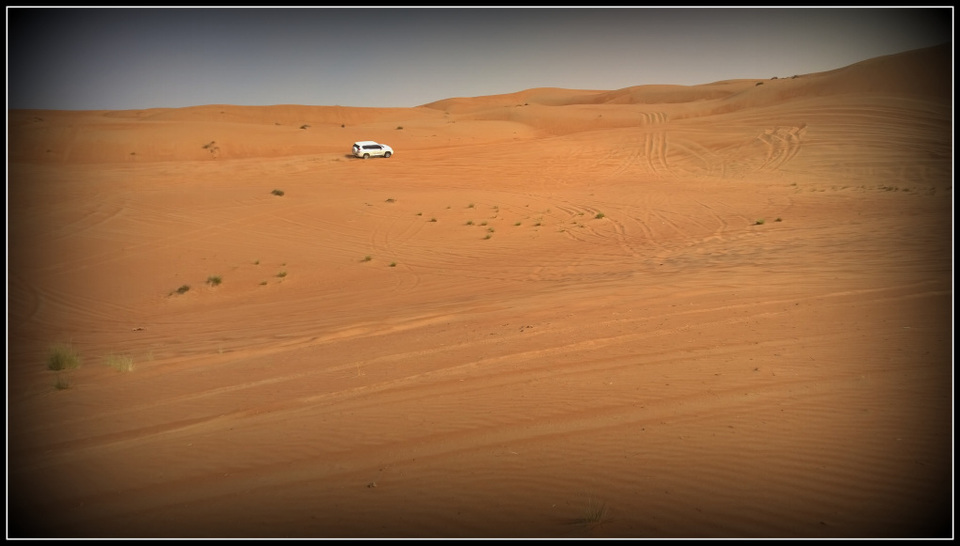 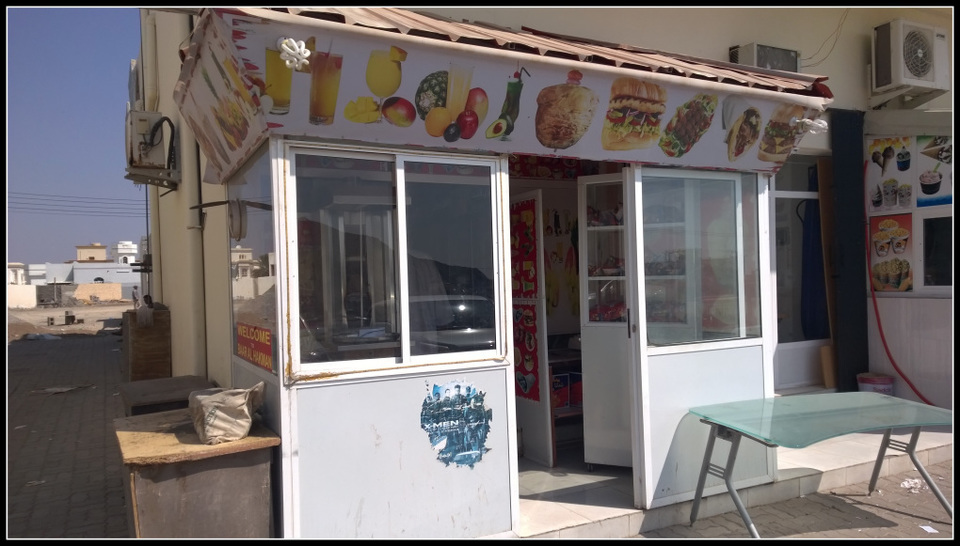 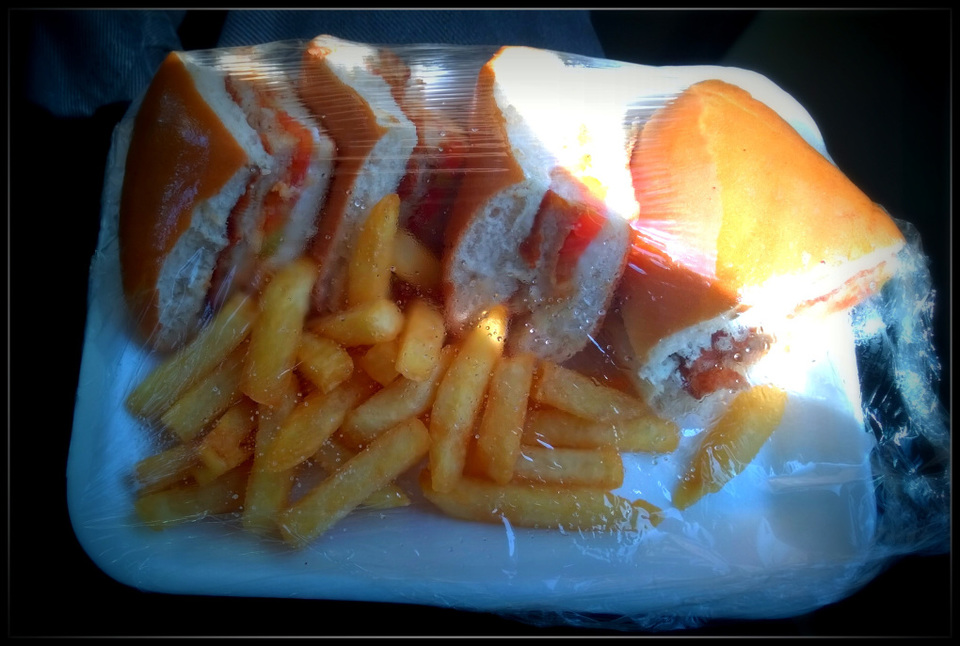 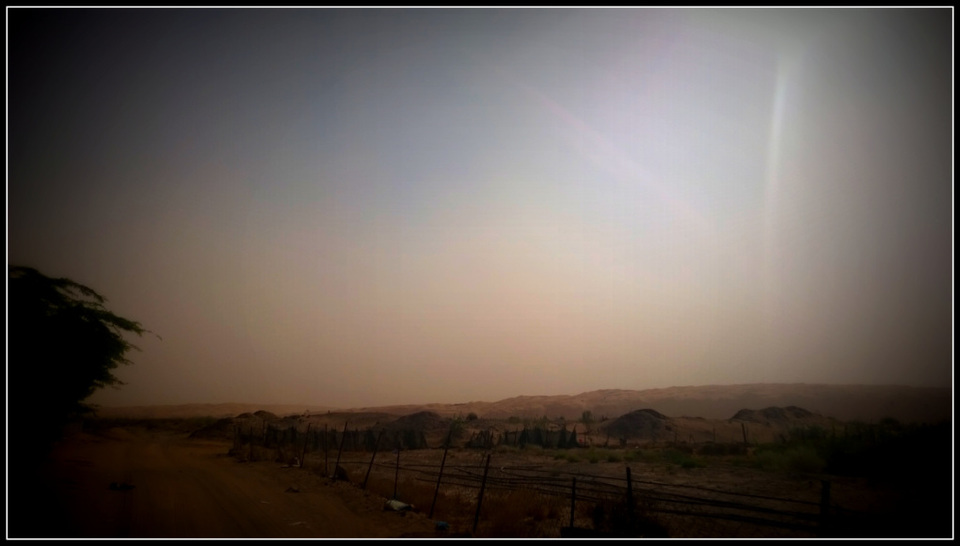 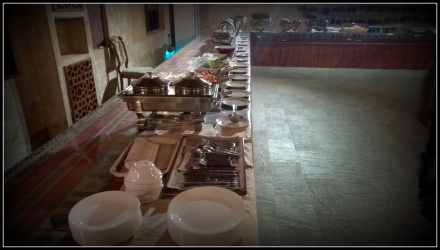 Wahiba Sands (now known as Sharqiya Sands) is a desert area around 250kms away from Muscat and about 120 kms from the city of Sur in the Sultanate of Oman. It's size is around 12,500 square kilometers. The vastness of the desert hits you in the face as you enter it.

There are dunes of varying heights in all directions. Some tower well above the others. There is sand visible everywhere as far as the eyes can see.

We drove down to Wahiba Sands from Nizwa via Jebel Akdhar - part of the Al Hajar Mountains (which I shall write about in my subsequent posts on Oman). Since we knew that by the time we reach it would be nearing late afternoon, we stopped midway at a coffee shop and bought a burger each as well as a couple of Oman Chips and soft drinks to refresh ourselves ahead of the long road trip.

The road trip was lovely in every sense with excellent views of the dry mountains and the wadis which we crossed on our way. As we were told by Dency (The Ministry of Tourism, Oman representative), the hills and mountains in Oman change in topography every few hours, we knew that such road trips were one of the most exciting parts of our stay in the country.

On seeing the desert, our first instinct was to ask Majid to take us for some dune bashing on the Prado. The couple of rides we had were truly adrenaline pumping as he effortlessly navigated his way through the sand.

Though amidst this, we did get stuck in the sand in such a way that it seemed the Prado could overturn and tumble down the dunes any moment. In the end, after a lot of pushing, shoving and efforts by all of us, we were able to get out quite safely. But this adventure of getting stuck high above the dunes did give Himanshu (The Lonely Planet photographer) accompanying Dency ample time to click some fine snaps. 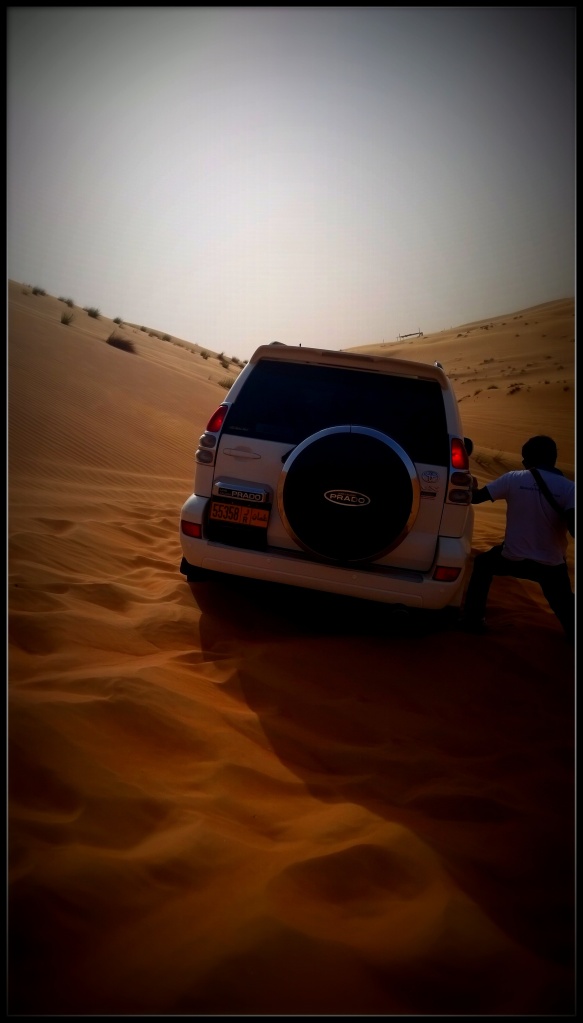 Once we got out of this tricky situation, we didn't have the courage on going for another such ride anytime soon. And so Majid set out for the 1000 Nights Camp which is the traditional Bedouin style camping facility in Wahiba. Just as we went a kilometer or two ahead, Dency reminded us on the walkie-talkie that we needed to head in the opposite direction for the Arabian Oryx Camp since the 1000 Nights Camp was pretty full. And so we changed directions and set out again. In the midst of all this, Mithun mounted his Go-Pro camera on the car bumper so that it could catch some lovely videos of our journey.

The Arabian Oryx Camp is a resort with an eclectic mix of Standard, Family & Traditional Bedouin Style cottages. All five of us quite interestingly were staying in successive cottages in line from A1 to A5.

The rooms were completely equipped with two separate beds, a bathroom, a split AC, Fridge, Coffee & Tea facilities and more. Now that's quite some luxury in the middle of a desert, isn't it?

At the Majlis with Majid.. 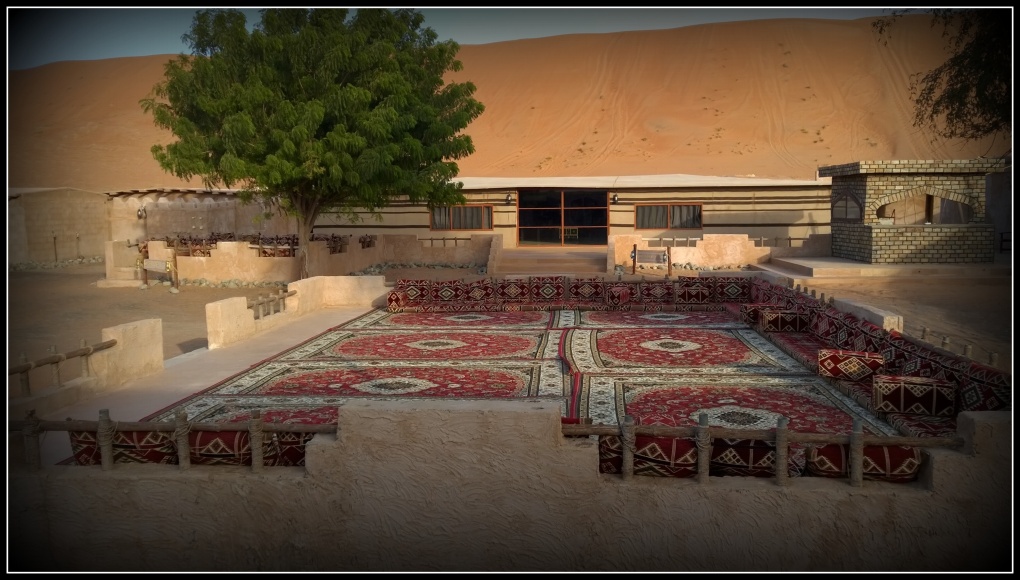 All the cottages were located in an enclosure with a boundary running across the perimeter. You could navigate between cottages by walking on the sand or using the Golf buggy's.

The entire camp had a very ethnic Arabic feel to it with facilities like the sitting area outside called Manama as well as the Majlis where many Arabic tunes hung in the air. There was kahwa (traditional Omani coffee) and dates available throughout the night.

The dinner was as awesome as always with a sumptuous spread of dishes of all kinds.

And finally, it was the time to hit the sack after another day of exploring one of the most beautiful countries on the planet!

Tip: It wasn't too cold at night during the end of October. But if you are planning to visit Wahiba from now until Feb-March 2015, do take a few woolens since you may be better off with them rather than without.

Note: This experience is part of the 5 day trip organized for three bloggers by Ministry of Tourism, Oman & Indiblogger from 25th October to 30th October 2014.

HotelsMap
SPONSORED
Want to book a similar trip?
I accept the Terms of Use and Privacy Policy of Tripoto.
SPONSORED
Related to this article
Things to Do in Oman,Places to Stay in Oman,Places to Visit in Oman,Oman Travel Guide,
Tagged:
#Eastern Province#Oman#Culture & Arts#Festivals & Events#nature#road trip