On a Bullet Yatra 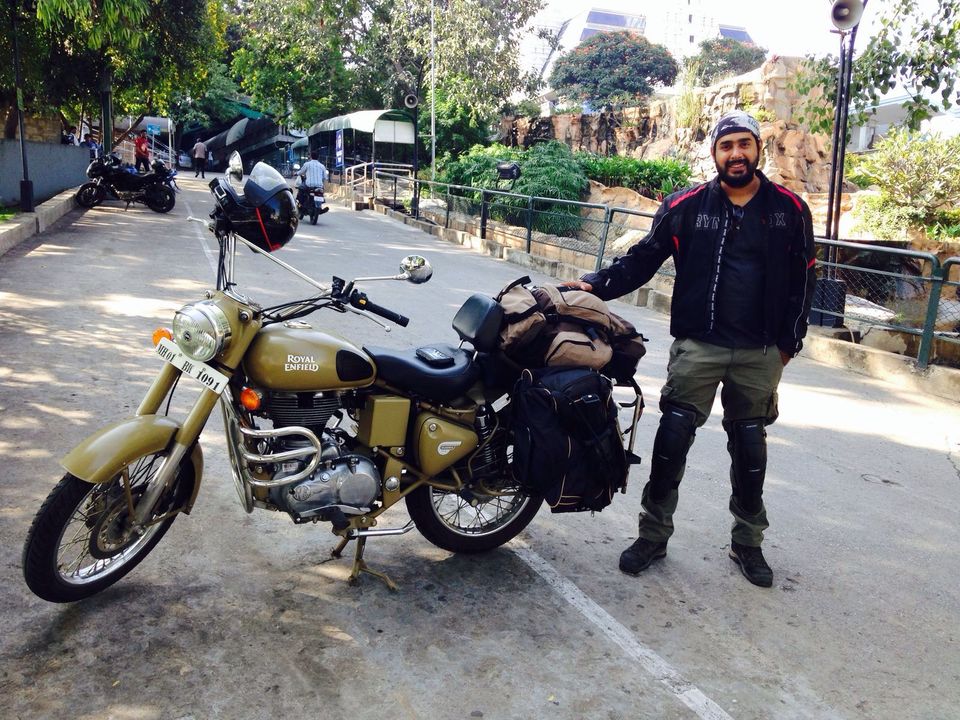 ON A BULLET YATRA

It took me four months to finally meet the person from the virtual world to the real and it was worth the wait. Meet Dhruv Dholakia, the man on a soulful journey, On A Bullet Yatra ; to be more precise and apt.

I started following his blog in Facebook when he had just begun this journey. The first story I read was about his experiences in Goa and that really intrigued me. Because I had just done a travelogue about Goa around the same time as well.

And today afternoon as we were eating a hearty meal of authentic Assamese food at Paradise we spoke for a long time. He looked on to his king sized plate filled with ten bowls of different kinds of food which would tease his taste buds and I briefed him to start with Khar which is alkaline and end with Tenga which is acidic. Before he could ask me “Why”?, I said, “We Assamese eat the Khar and end with Tenga to keep the Ph balance in our body intact!”.

The first thing which he has answered about a hundred of times is, “What triggered and inspired him to take up on this mammoth solo ride? Was it a much thought and detailed plan or was it just a flash of wisdom that struck him?”

He leaned back, flashed me a broad smile with a raised eyebrow and said, “I had been working as an investment banker for the last ten years. And I felt I was getting nowhere. I was becoming a very boring person. I was doing the same things day in and day out. And when I went out on weekends, I realized there were no interesting conversations. I was growing at a receded pace. So I decided to explore.”

So on the fine morning after Ganpati Visarjana, i.e 29th September, 2015 to be exact, he put the ignition of his 500 CC Royal Enfield on and there has been no looking back.

He has traversed from the Western Ghats to the Southern tip of India and now is in North East to explore the furthest Eastern point where the sun rises for the country. And he said, “This is perhaps the best leg of my journey.”

Assam is his twelfth state that he has stepped on.  He has seventeen more states to traverse.

“I want to explore the twenty nine states in fourteen months’, he said, as he savored on his meal.

And he feels life is so peaceful here with zero pollution and no traffic as compared to Mumbai. I did not know whether to laugh out loud or have second thoughts. So I took it as a big compliment and thanked him wholeheartedly.

I told him as we finished our meal, he is doing an incredible job and it is so inspiring.

“What are your plans?”, I asked

“Plan?, he questioned me back.

“Nothing as of now. When I started my journey I did not know what was in store for me. My mother was worried. I just asked her to pray for me, being the spiritual and religious woman that she is”.

He further continued, “The entire journey till now has been an assortment of experiences. With landscapes, weather, food, culture and language changing every hundred kilometers”.

I smiled and nodded my head in affirmation. He is so true. Being a traveler myself I know the joys of trotting and learning about life.

To travel is to live and learn. He spoke about Gautama Buddha, Swami Vivekananda, Mark Zuckerburg  and Steve Jobs; to mention a few who travelled to find their true calling.

All I could do was nod my head in total agreement.

We shook hands firmly knowing well we will be meeting again as long as he is in North East. And I walked to back to my work as he rode on his Bullet and agreeing for sure….He Who Does Not Enjoy The Journey Can Never Reach His Destination.