Pondicherry – The Paradise of Beaches and French Colonies 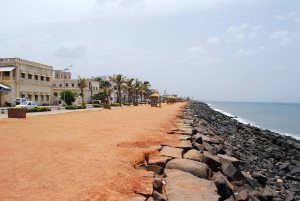 Bangalore, the city of gardens and for many the city of dreams in the south. As soon as I landed in Bangalore, the first travel outing that was planned was to the beautiful union territory of Pondicherry, or Puducherry as it is fondly known. It will always hold a special place as a travel destination because after I started working this place gave me the first hand experience of what a thrilling weekend outing could be like. Pondicherry, a paradise of beaches, boasts of a natural beauty for its beaches and that too clean ones.

Pondicherry was a spontaneous decision. Siddhant Karnik, a dear friend proposed the idea and again the little explorer within me dreamt of discovering one more place with ease. Puducherry gave an impression of pristine nature. It refreshed the youth within me. We set off from Bangalore with lots of banter and excitement. Manali, Aakanksha, Annie, Sid and Krishna, the group was ready and up on its feet. It started with a little quarrel with the notorious autowallas as usual, but set a splendid mood as we discovered the French colonies and wondered in awe as we experienced the ambience in the state of the art, yet, elegant restaurants.

Roaming like kids on bicycles, discovering a spontaneous place to live, sharing rooms and at the same time oozing out all the sexiness on the Auroville Beach. The night where we sat with drinks was a crazy affair, since no one really enjoyed the booze but the actions and activities of each other that brought humour to the room. Crazy dance, splendid music, banter of laughter, the classic “ Annie “ dance, the “ loneliness” of Krishna and then there was “ Teddy” who was a darling. We found a financial expert in Sid and a responsible traveler in Aakanksha.

I can never forget that ride to Paradise beach and the 14 km cycle ride along the highway. We just had one big road leading us to nowhere and we rode and rode with innocent hearts. La Maison Rose, Café des Arts, Indian Coffee House and Surguru gave us first hand experience of Pondy and French cuisine. The last night at Pondy where an Italian Chef himself prepared Lasagne and Spaghetti for us was memorable. The dishes were lip smacking and fulfilling.

Travel is just one word that fills the atmosphere with enthusiasm and exhilaration because the mere thought of going to a new place brings out the innocence, and the newness and of a place will always attract. The serenity and calmness of the French colonies still rules my heart. Puducherry happened by chance and with my Bangalore mates it became a fond memory. Some smashing activities made this trip adventurous too.

Looking forward to more such trips that will enrich the purpose of life and that it is to learn and discover all that you can in the world.