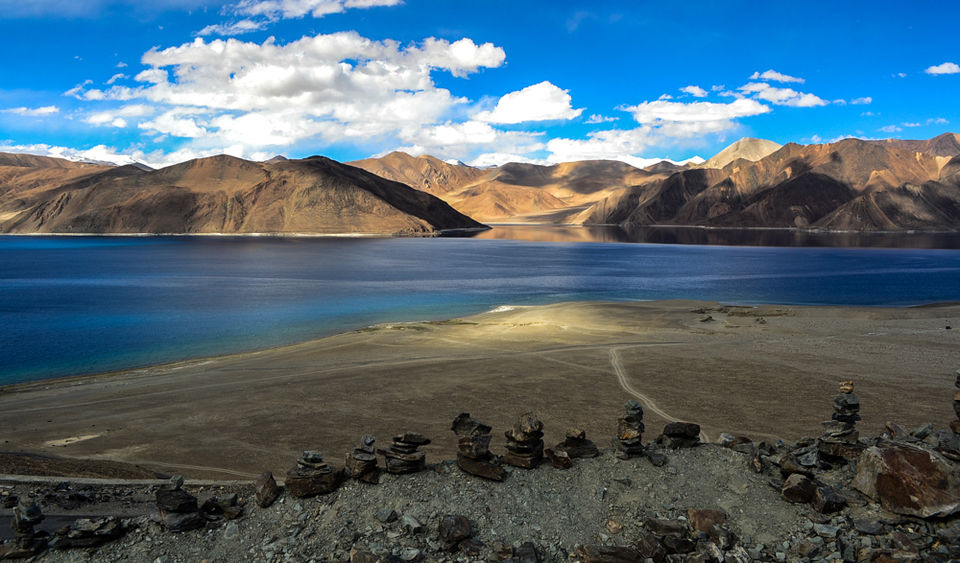 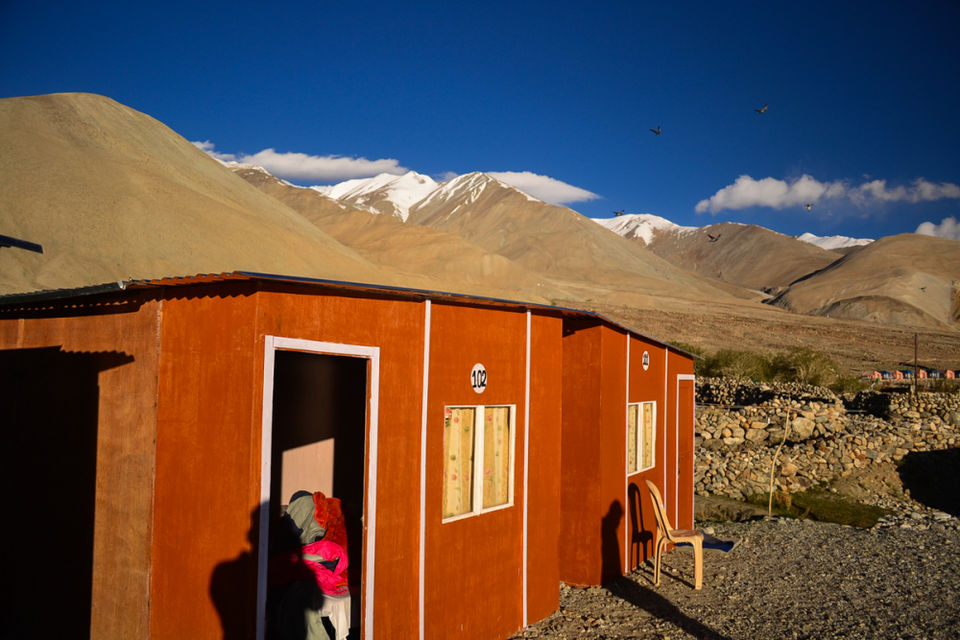 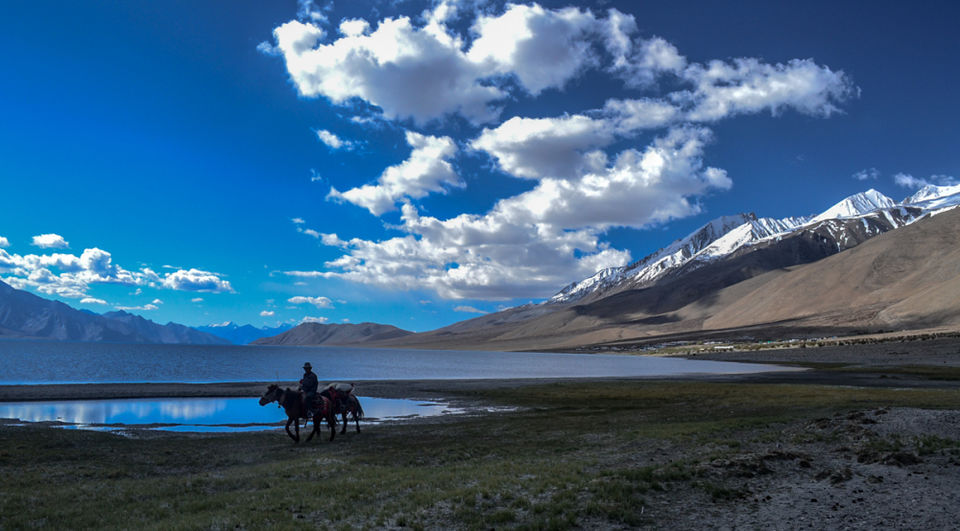 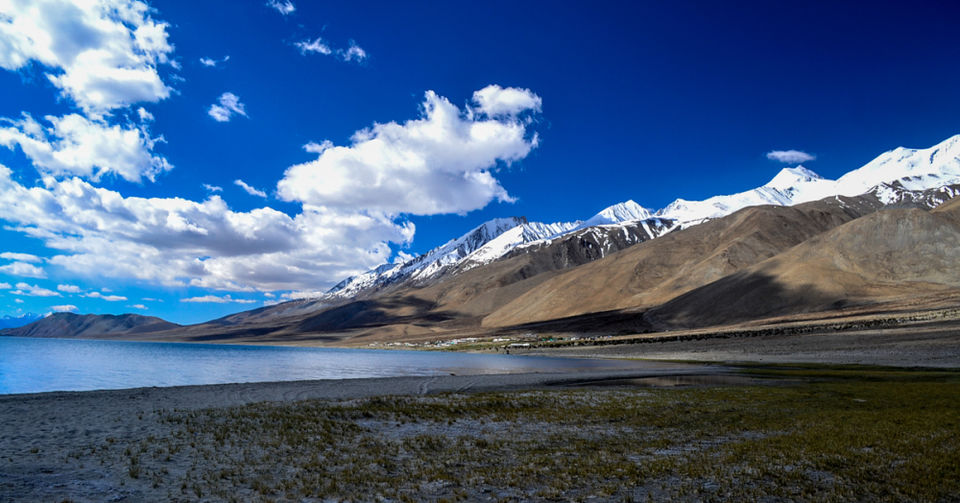 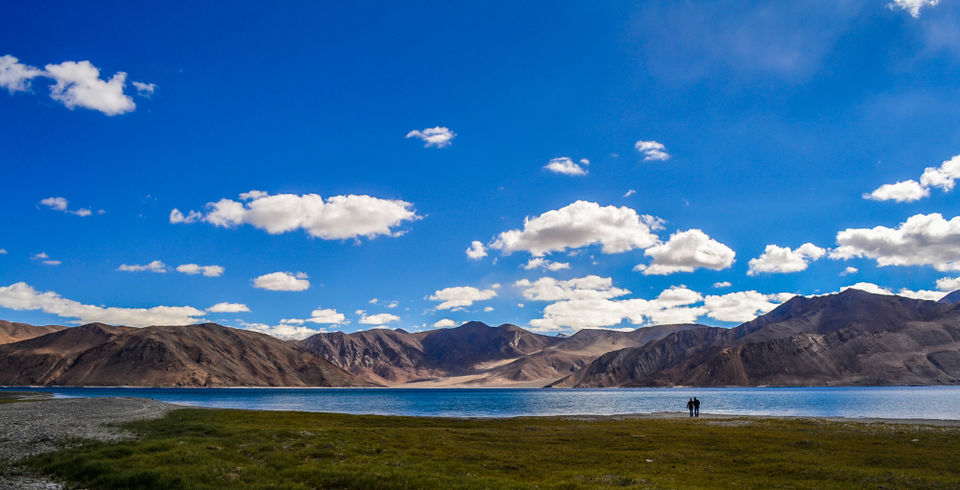 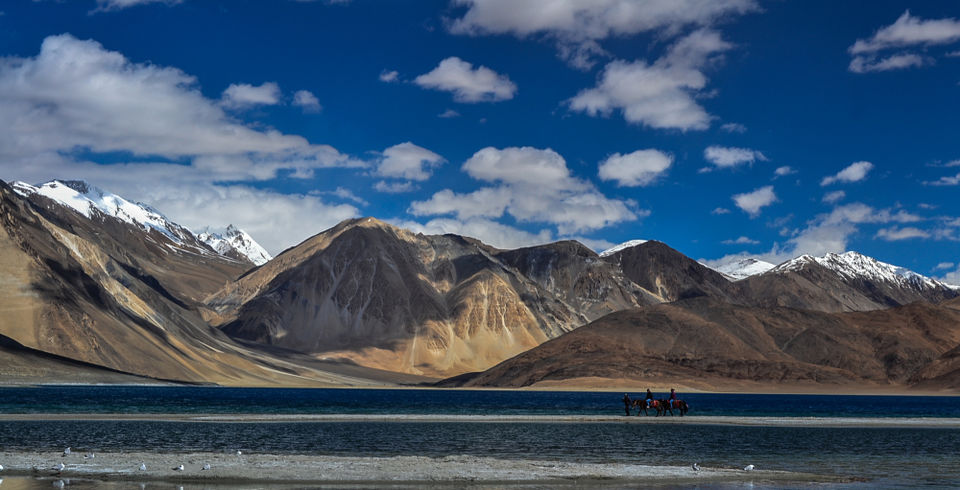 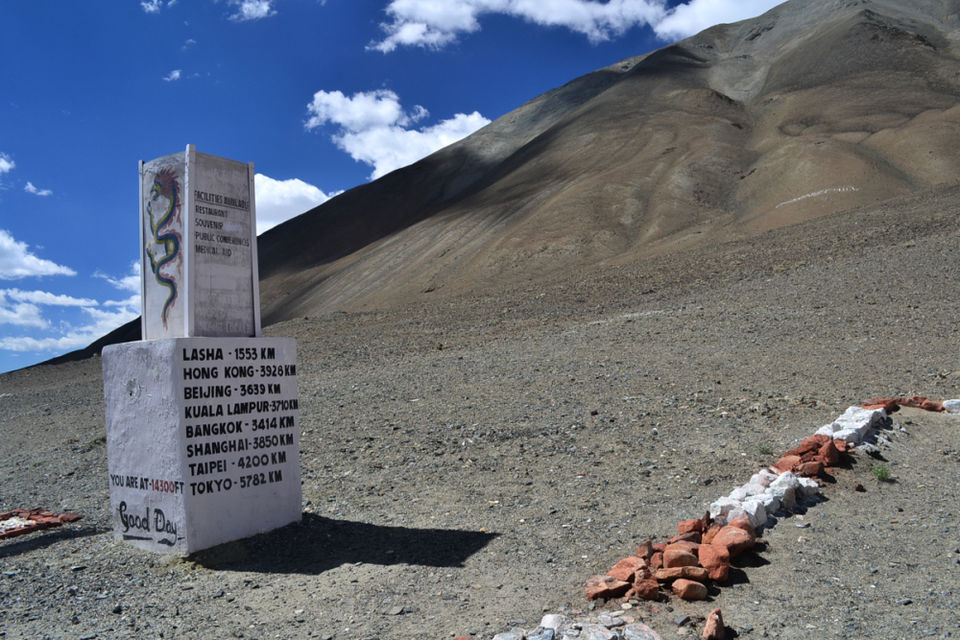 .. Though the country is so barren, the lake has its beauties in the varied tints of surrounding hills and mountains, and the rich deep blue of its waters, becoming quite of an emerald green colour as they shallow near the shore.*
Once in a while during your travels, you come across a place that is different from everything else you’ve ever experienced. It captivates your imagination and the mind, already lured away from the monotone of routine, is suddenly unshackled and left free. As the body relaxes and somehow starts breathing differently, every whiff of fresh air invigorates you, like never before. This strange sense of absolute bliss and tranquility etches out memories that stand out not much unlike flame trees in full bloom. For once, you feel truly alive.

The Pangong Tso is one such place. It throws out all the undulating hype that has been building in your brain from weeks of anticipation. Only words can do it even a modicum of justice, and since I won’t attempt the sacrilege, I will depend on a few photographs to lend the narration some respect.

.. a fine view of the first long reach of this elevated and interesting piece of water is obtained. Its colour is of an intense blue, the water as clear as crystal, but far too saline to be drinkable; there was quite a true salt water feel in the air as the wind blew off it.*
To see it in a photograph or read about it in a book is different. But to be able to witness the changing colors and the natural play of light and shadows, to hear the gentle waves lapping at the shores, to ignore the cold wind biting against your skin while breathing in the rarefied air; is a privilege – one that is not meant to be forgotten.

Daytime temperatures near the Pangong Tso are not much of a botheration. But in the evening, the temperature drops rather quickly into single digits. What makes it unbearable is the ferocious wind. The wind chill makes a bearable 10 degree Celsius feel like sub freezing. The cold penetrates exposed skin and soon, the nerves start tingling due to the numbness. The wind makes the ears scream in pain, the cold makes the nose weep too.

At night, the wooden walls of our cottage provide minimal respite. Outside, we can hear other tents flapping in the wind. Inside, our drinking water becomes too cold to be drinkable, and any contact with unheated water is like sifting through a sack of needles. The mink blanket and quilt feels like heaven, but that is only after you’ve put on 4 layers of clothing. Getting out of bed once you’re tucked in, is unthinkable.

In spite of all this, I do step out at night, briefly, to take a look at the starlit skies above. The milky way is not as crystal clear as made out to be, but the sky does seem darker and the stars by contrast, brighter. The wind protests against my intrusion in its space, and soon forces me inside. For a couple of tourists though, liquor and a bonfire prove adequate. Pangong is at a considerable altitude, and none of us sleep well at night.

The roads that lead to Pangong Tso overlook small ravines that gradually open up to a wider expanse of land covered with silt, sand and rounded pebbles – no doubt the remnants of a dried water body and also revealing the ancestry of the lake.

The Chinese are said to have captured the entire Pangong Tso in the 1962 war, after which a third of the entire area was reclaimed (or surrendered) to India. Tashi pointed out a few minefield ridden areas to the southwest of the lake that was still cordoned off, instances of grazing animals sometimes wandering into these areas and getting blown up are not that uncommon.

* Extracts taken from  Journal of the Asiatic Society of Bengal, Volume 37

We stayed at the Himalayan Wooden Cottages for a night. Stay options are plenty, but if you are finicky about the cold weather, you can check out stays built out of concrete rather than the tents or wooden rooms available. Do remember to take a hat or cap, sunscreen is of minimal use during the day when the sun beats down relentlessly.

-Conclusion of the Ladakh series-

This travelogue was first published by Garnished Nonsense .