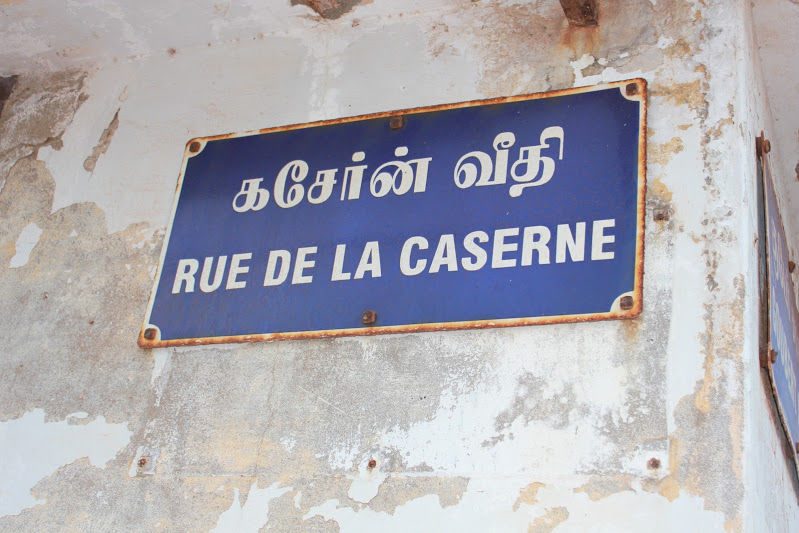 My friends and I decided to take a short four day trip to Pondicherry; this place had been on the back of my mind since some time, so it just took me a second to say yes.

The day we were leaving I had to reach the airport at 5.00pm and at 4.00pm I was arguing with my boss, ok I was going to miss my flight, but thanks to some dirty rash driving (I absolutely don’t recommend) I reached the airport by 4.30pm, and the spice jet attendant entertained me, I was dancing at the airport literally.

We reached Chennai at 8.30pm, had arranged for a car to pick us, and drop us at “ Sharnga Guest House”. This guest house is run by Bernard a french man who is staying in Auroville from the early 80’s a very interesting man to talk to, who can tell you many interesting facts of the place and some tips to be safe in auroville.

Auroville is a town 14 Kms from Pondicherry, founded in 1968, by The Mother she was a
French lady called Mirra Alfassa who became Sri Aurobindo’s follower soon after she first came to India in 1914. Later, he bestowed upon her the title of The Mother. Her vision for Auroville was a place, a universal town, where men and women from all countries live as one. The purpose of Auroville is to realize human unity. People from across the world come to spend time here, doing regular, everyday chores, be it cooking, washing, gardening… Everyone is treated equally, as one – that is the kind of society envisioned by The Mother.

Sharnga was a beautiful place, with no frills attached, after reaching late at night we got up to a nice breakfast under the trees, some French toast, mangoes, fresh bread. Today we decided to go round the town of Auroville, we took a map from the reception of the guest house, requested them to give three cycles and off we were.

Our first stop was the “Solar Kitchen” this place is a community kitchen where food is made with the help of sunlight. Next was the visitor center, this is your door to see the Matrimandir. Before you acquire the pass to visit the matrimandir you have to see a short film that tells you how, in 1968, some 5,000 people assembled near the 150-year-old banyan tree at the centre of the township for the inauguration ceremony, a solemn affair, attended by representatives of over 124 nations, including the states of India. These representatives brought with them handfuls of soil from their homeland, to be mixed in a huge, lotus-shaped urn that now forms the focal point of the amphitheatre.

The concept of this place is the next step of spirituality, which if attainted the world would really be a place of peace, enlightment and brotherhood.

One thing that you must do if you have the time is visit the matrimandir from inside, for this you have to take a prior appointment from the office above the café at the visitor center. Our journey continued through the raods of auroville peeping in the American center, solitude  glancing at the way people stay and have built wood houses that are environmental friendly.  A flat tire did disrupt our journey  a little but our legs gave us the support.

The next day we shifted our base to the city of Pondicherry, it’s been rechristened Puducherry — which means ‘new village’ in Tamil. We had booked ourselves in an 18th century house now the Hotel De L’Orient. The long corridors, high celling, old fashion beds, arcs, wooden flooring, huge windows, the sight took you back to the old school charm. We ensured we saw each of the rooms, and left a mark in some of them.

In the evening we set out on the beach road, a long stretch of road with the bay of bengal on one side and restaurants, hotels, and the Aurbindo ashram to the other. The city has a distinct french feeling to it even now. Especially places near the beach road. Roads meet at perfect right angles, many streets still have french names and the place is so clean. As you move away from the beach road the city becomes more and more indian with crowded road, lot of traffice and lots of people. But yet the city maintains its charm. Bussy street, the crowded Lal Bahadur Shastri Street are like any other indian streets with lots of shops. If you get bored of the city you can take the bikes and ride about 10km to Chunnambar. It’s a water sport complex where you can go on boat rides in the backwaters.

Our Pondicherry trip had come to an end the next day but on our way back we ensure we visted the historical site of Mahabalipuram.

And trust me, if you are someone who loves a lazy laid back city and loves to explore new cities then then this is the place for you. You will fall in love with the city too, just like i did.