Sneak Peek into a day of the Subtle yet Resilient, Kung Fu Nuns of Ladakh 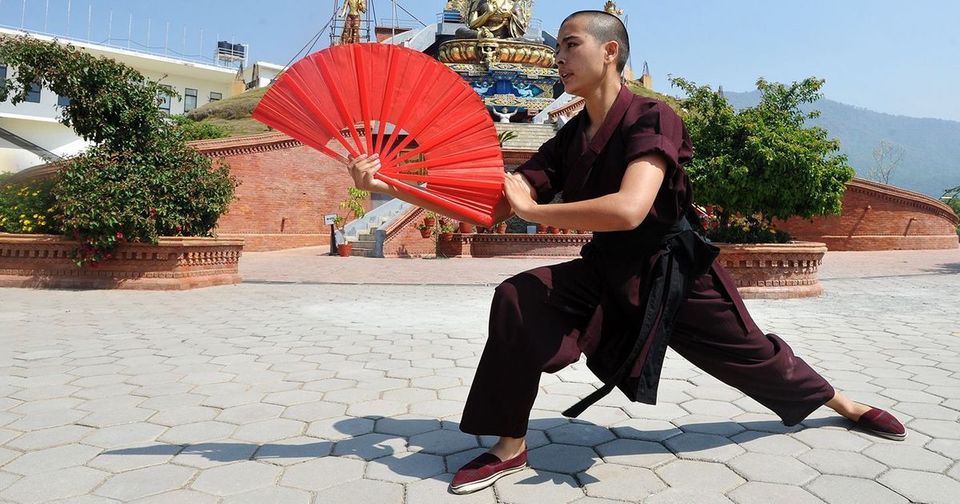 It was pitch dark and the minute hand of the clock is ticking lazily over 3 am when one can spot girls moving out of their shelters and meditating in Naro Photang close to Hemis Monastery in Ladakh.

Ladakh is a place most people associate with pellucid blue skies, mystical terrains, humongous mountains, adventures, and solo bike rides but what they didn’t know that Ladakh is also a place for spiritual enlightenment, women empowerment, radical thoughts, and strong people. As sun rays break through the star illuminated sky of Ladakh, the atmosphere is filled with overtones of chants and meditational hymns. With picturesque landscape in the backdrop, one can picture girls in their maroon robes practicing martial arts and a whole set of different maneuvers. The chronicle started back in 2008 when His Holiness The Gyalwang Drukpa broke the shackles by creating a sect of nuns and teaching them self-defense. Mainly stationed in the Hemis Monastery, this place is now home to more than 400 nuns mostly belonging from Ladakh, Nepal, Tibet, and Bhutan.

After an hour of breakfast, they have regular classes of literature, history, science for a long and strenuous 4 hours. The nuns have an elaborate knowledge of music and different forms of dances. They practice 2 long hours of dance which includes local and tribal dances along with some other forms. Recently the Naropa Festival has concluded which is an annual festival portraying the cultures and traditions of Ladakh. The nuns showcased their talent of dance and music in many events in the five-day long endeavor.

The morning and evening sun witness their strength and superhuman skills in Kung Fu which they practice for 2 long hours. Their class includes high kicks, swords, nunchucks, matchets. When asked about the reason for such rigorous indulgence in martial arts most of them said it is their way of empowering women and helping them learn self-defense techniques to prevent cases of rape and molestation. Though they didn’t have any formal recognition in this genre of martial techniques but their leader is keen enough to introduce them to the actual world of sports and ward them different hierarchies of Belts.

Homes which they all left for changing the World

When asked about their families and the reason of choosing such a rigorous life of discipline and abandoning worldly pleasures, most of them reciprocated by their urge to know themselves rather than getting lost in the chaos. Some came from good families at a very tender age and some denounced jobs and chose a life of spiritual enlightenment. One of them left the job of doctor and when asked she answered that she preferred to heal the soul which is the source of bodily wounds rather than the body itself. They are allowed to communicate with their homes once in a week and that too not with mobile phones. They visit their home once every three years unless there is some emergency but they said they never missed their home now.

If you think they are secluded from the world and are not aware of the things happening in the outside world, you would be very wrong. They have extended hours of reading before their day comes to an end. You will be amazed by the knowledge of current events of the world they possess including Nepal Earthquakes, floods, political turmoil, and even global news.

After Jigme Konchok Lhamo got familiar with our conversation she opened up and narrated the different other activities they actively participate. Listening about their activities gave me goosebumps – from trekking, cycling to voluntary activities, they have been part of everything. During the Nepal Earthquakes, they worked for a group called “Live to Love” where they rescued many wounded victims. They also work for an animal rescue and if you are keen enough you can visit their rescue centers which shelters millions of stray dogs, cats and local animals. They have walked long miles in Eco Pad Yatra that took place recently for an initiative to clean the Himalayas. In this, they not only worked hard in cleaning the garbage but also educated the locals about the importance of a clean environment.