Tawang - A journey full of surprises.. 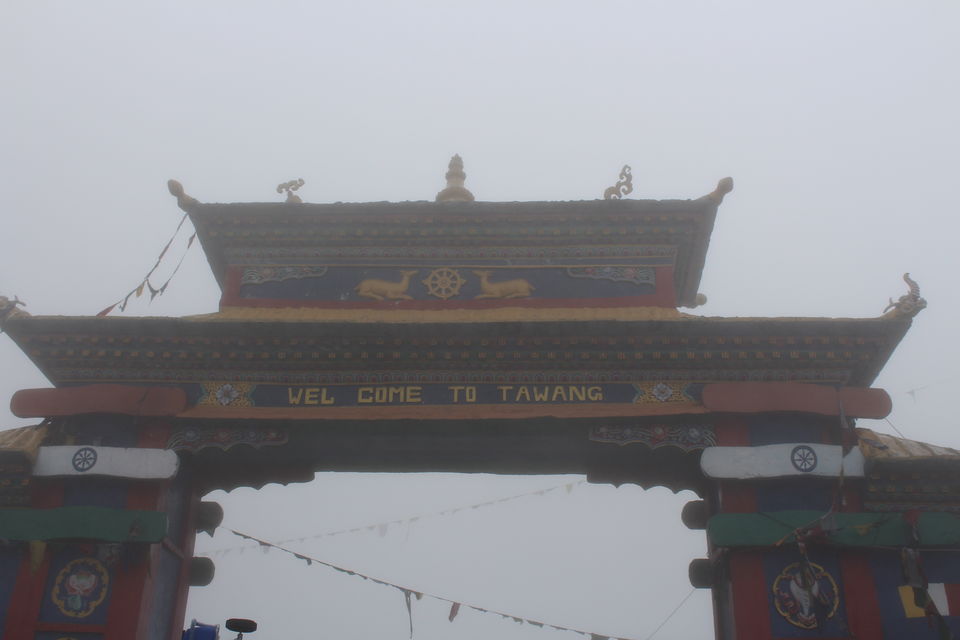 Me along with my 3 friends have experienced a life long learning, death defining, fun filled, breathtaking trip to Tawang, Arunachal Pradesh on our rented Royal Enfields in the month of prolonged monsoon in the state. The unexplored beauty of the last point of the Ind0-Sino border, most ancient Monastery, world's treacherous roads and unparalleled beauty . The trip had surprised us on every turn of the road, every hour and every moment of the day.

We started our trip from New Delhi and took the early morning flight to Guwahati, Assam. We rented 3 bikes i.e. 2 royal enfield classic 350 and 1 thunderbird 500 and started our journey to the day-1 itinerary of the trip to reach Tezpur, Assam, which is 170 Km from Guwahati. The roads were good and it took 4.5 hours to reach Tezpur. En-route Tezpur, we crossed the Tezpur Brahmaputra bridge, which is also known as Kolia Bhomora Setu. The length of this Bridge is 3015 metres. The view of Brahmaputra river is breathtaking by looking into the dimensions of the river. It gives the feeling that the bridge is constructed over a sea rather than on a river.

After Reaching Tezpur, we call off our day with a promise to leave early morning to start the most toughest journey of our life. 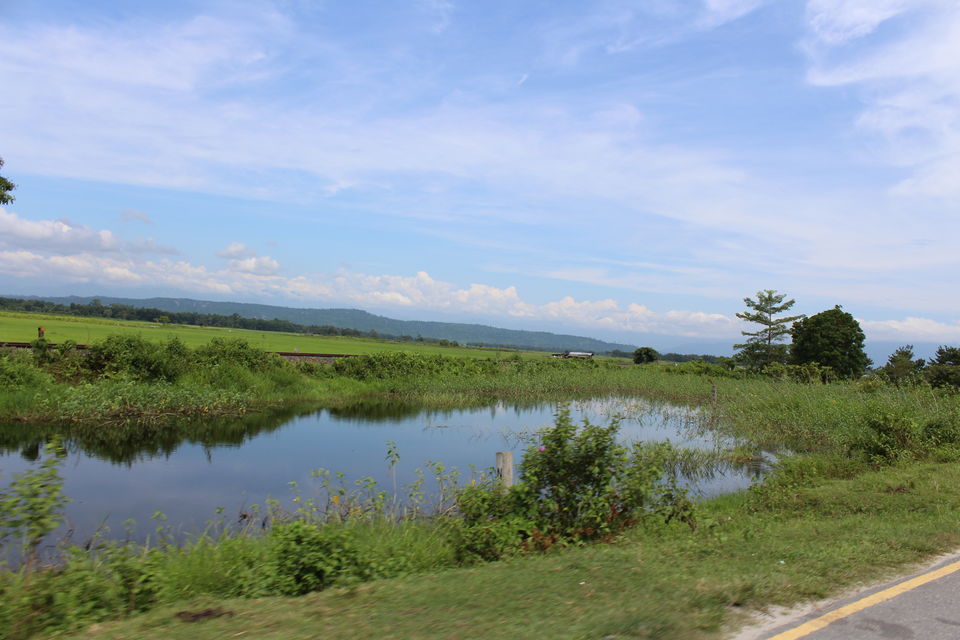 We started Day 2 early in the morning, filled up the fuel tanks to start the Day-2 Itinerary for Dirang, Arunachal Pradesh. Enroute Dirang, we crossed Bhalukpong, Tenga and Bomdila pass. The distance to Dirang is around 180 Km.

From Tezpur to Bhalukpong, the roads are pretty straight and in good condition. Bhalukpong is nearly 45Km from Tezpur city. At Bhalukpong, you need to show your IDs and ILP (Inner Line Permit) at the check post of the Indian Military to enter Arunachal Pradesh. ILP can be obtained online through the Arunachal Pradesh government portal http://arunachalilp.com/. It is desirable to apply for permit well in advance. The Mighty Himalayas has now started. The roads were decent upto Tenga. We had couple of stops in the way to capture the scenic beauty of picturesque waterfalls. 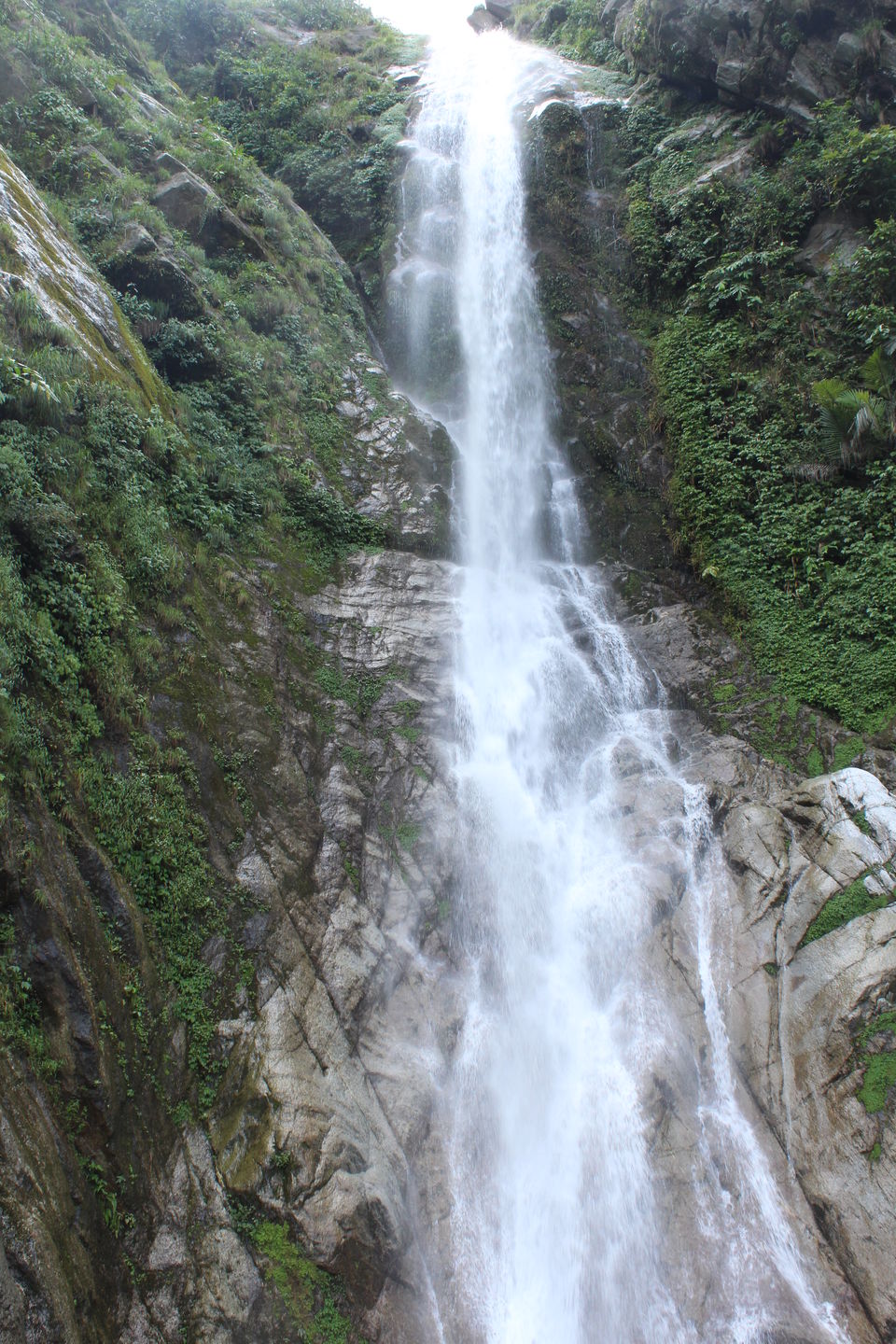 Now, the real twist begins. Its 3:30 Pm on the clock, we are just 8 Km away from the Bomdila pass,the heavy thunderstorm started. We got down from the bikes, put on our raincoat and wrapped the bags with the big poly bags (which we were carrying with us for such unprecedented events) and resumed our expedition. To our surprise, the rain had now turned into a cloud burst. The downpours were hitting hard on our bikes. During one of the turns, we encountered the live landslide right in front of our faces. The soil was flowing alongwith the water. Our 1st rider just had a miraculous escape from this slide. Moving further 150 metres, we came to know that a series of gigantic landslides had occured and the roads has been blocked in many areas.

We had no other potion but to wait in the rain for full clearance of roads. The local authorities has come with the excavators for clearing the road, however continuous pouring were making their task difficult. It took them 3 hours and lots of hardwork, before making the road fit for transportation. We resumed our journey around 6:30 Pm, the roads were filled with around 15 inches of mud making the bikes slippery. It was very difficult to pull the bikes in the muddy road and in no light. Somehow, with the help and support of the local people, army personnel etc, we managed to get through. We crossed Bomdila pass, which is at 7200 feet and found ourselves alone riding in the dark. We could only find our bikes headlights in the otherwise deserted roads at this hour of the evening. The silence of the roads were scary and thrilling at the same time.

We managed to reach Dirang around 8 Pm in the evening. which is around 50Km from Bomdila. Our clothes inside our bags had got wet by the force of the rain, even our polybags were unable to protect them. We checked into the guest house and soon after that the thunderstorm started again which lasted the whole night.

The rain from the last night continued till the 9Am in the morning. We resumed our trip and had to cover around 150Km to reach Tawang through Sela pass. On the advise of the locals, we fueled our bikes in Dirang as there were no fuel pumps till Jang, which is around 110 km. We started and stopped after 5Km by a huge rock mass including a tree fell over on the road, another landslide. It get cleared and our 45 minutes has been wasted again. We were already prepared for the bad conditions of the road as we have done our homework. After 20 Km from Dirang, there is a food joint for lunch & dinner, they serve good quality food on affordable prices.

After 35Km at Senge, the condition of road has turned to the worst, passage were narrow, mud all over and traffic of trucks from other ends made it very difficult and almost impossible to get through. Subsequently, 1 of our bike i.e. Thunderbird 500 broke down in a middle of nowhere.The feeling of frustrations and disbelief cannot be explained Somehow after 3 hour of hard luck, God has shown some mercy and we have a passerby who is a excavator guy, who repaired our bike. Suddenly, the believe and faith has been restored. 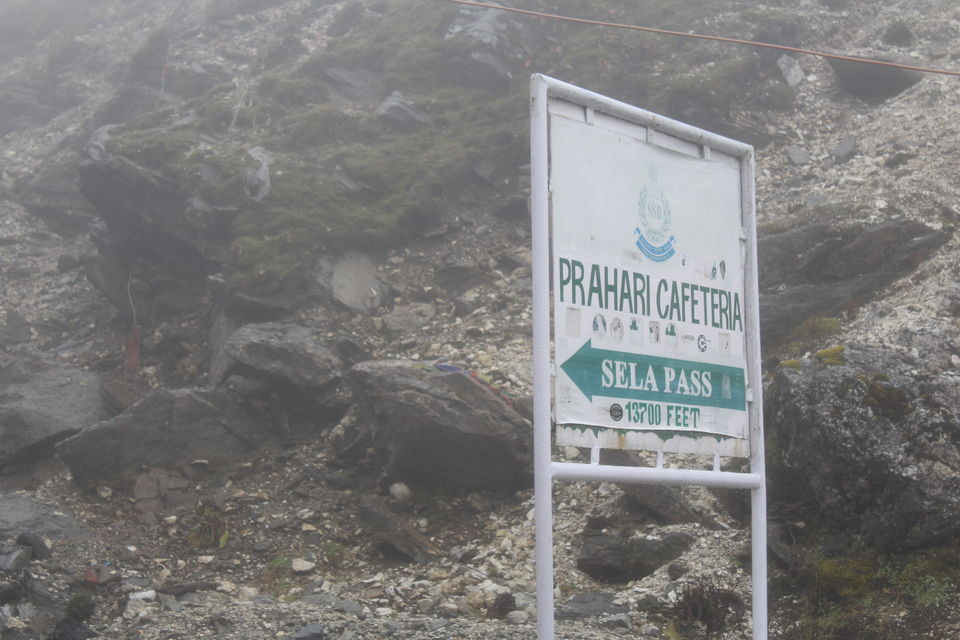 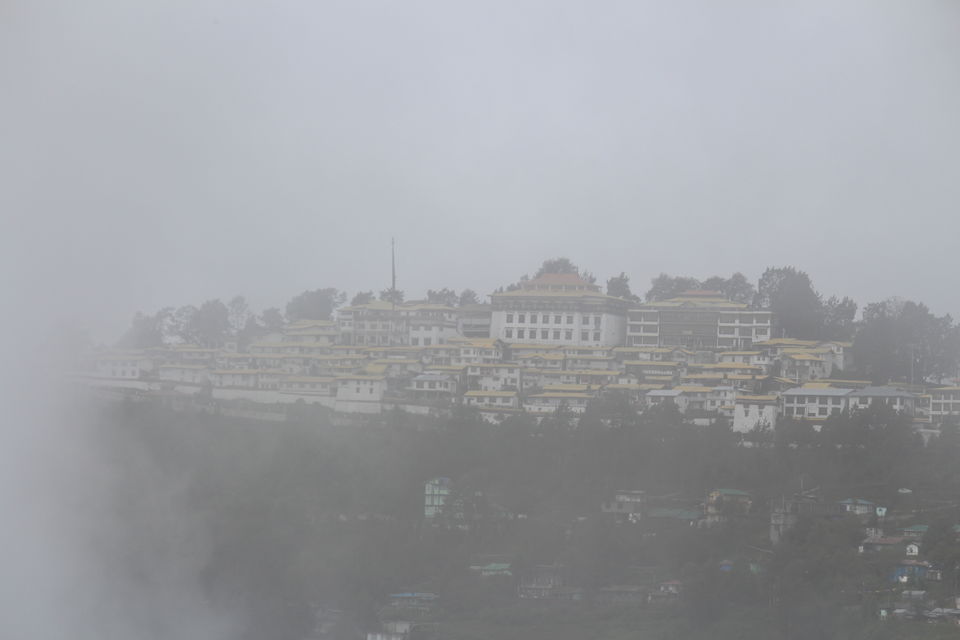 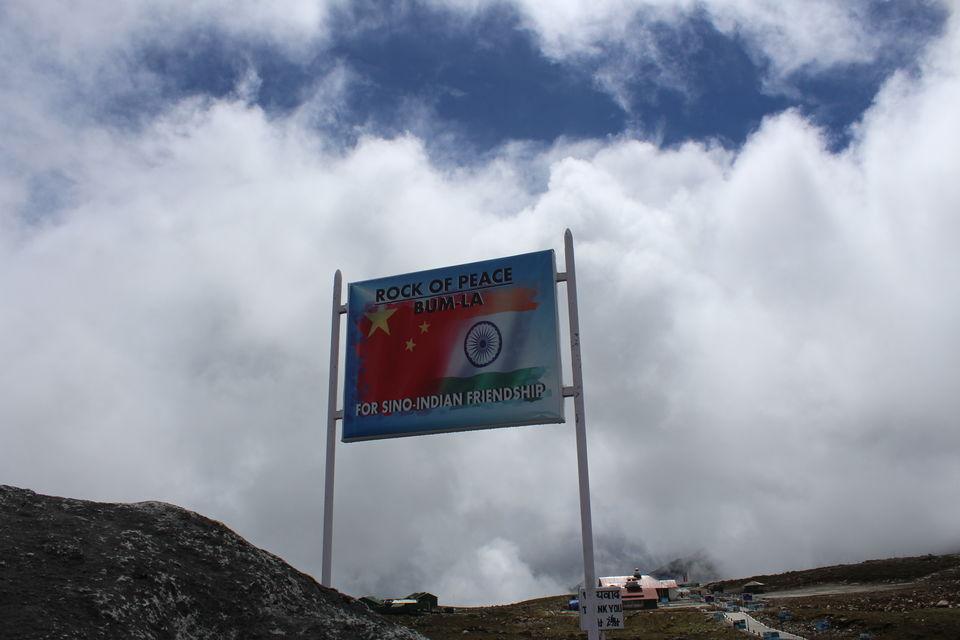 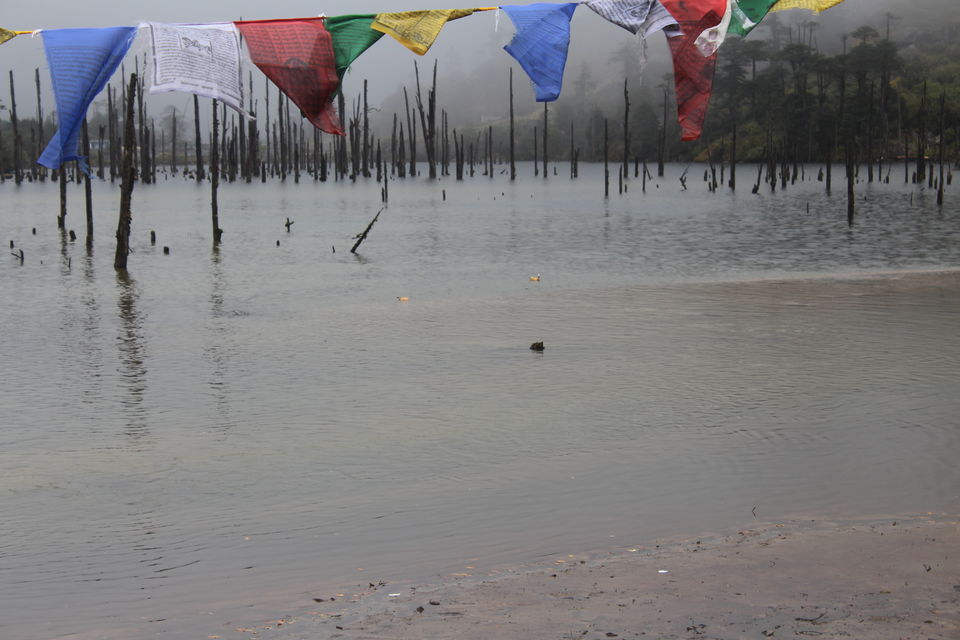 After towing the bike at 6:30am in the morning, we have started our return journey from Tawang to Bomdila. On our way back, we see the Jaswant Singh Memorial and Sela lake, which is just before Sela pass. This time we crossed the Sela pass at 1:30pm and worst road of the journey by 4pm at Senge. We reached Bomdila at 8pm without much glitches this time. Although the intense fog and no daylight was there.

We started early to see the Bomdila Town. After visiting the town, we leave for Tezpur. We reach Tezpur around 4pm. The road from Bomdila to Tezpur has deteriorated more by the unprecedented and have lot more difficulties to cross the roads. After reaching Tezpur, we had got the bike repaired and call off the day.

But that was not enough for a day, after resuming our journey at 3:30 Pm, we have encountered Fog and temperature has been dipped drastically when we reach Sela pass, which is at 13700 Ft at 5Pm. However, it is advisable to cross Sela pass before 1pm to avoid any difficulties. Tawang was still 75 Km from Sela and road was in bad shape with daylight faded away. We continued through bad roads, witty weather, intense fog and no day light. No passerby's, the disadvantage of driving on mountain terrain in the night. But by the God's grace, fighting against all odds, we have managed to reached Tawang at 9:30 Pm in the evening.

Enjoy the beauty of the city. Visit Tawang Monastery, which is the largest Monastery of the country and Second largest of the world and the other major tourist attraction of the city. In the evening, around 7:30 pm, the light and sound show has been arranged by the Military battalion on the Indo-Sino 1962 war. The movie give you the goosebumps and filled you with the Patriotism. The day can also be utilized for getting the pass for visiting Bumla pass and Shungatser Lake. The Permits can be requested at the Office of the Deputy Commissioner in Tawang District, and the same has to be stamped in the Indian army cantonment at Tawang town. It is also to be noted that without the army stamp, you will not be allowed through the numerous check posts on the way, which will be arranged by the Travel guides available there.

Hire a vehicle for visiting the Bumla Pass and Shungatser Lake and other undiscovered places on the way. The permit is required for visiting the area. The vehicle will charge you around Rs.5000 and will take full day time to visit the above places. Bumla pass is the Border of INDIA and CHINA. It is situated at 15000 Ft. You can also buy souvenirs from there.

The Shungatser lake is Created by falling rocks, boulders and trees in an earthquake, also featured Madhuri Dixit in the movie Koyla, as a result this lake is sometimes also called Madhuri lake. The lake is situated at 16500 ft. There is an army canteen which serves excellent food at the affordable cost. You can also buy souvenirs from there for your loved ones.

We returned to Tawang and went to the mechanic as our one of our bike was having issues. We got to know by the mechanic that the clutch plate of the Thunderbird 500 had been damaged and need to be replaced. In the entire town of Tawang, we had not able to find the new clutch plate. So, we decided to Tow the Thunderbird 500 upto Tezpur. Another surprised element of the trip. 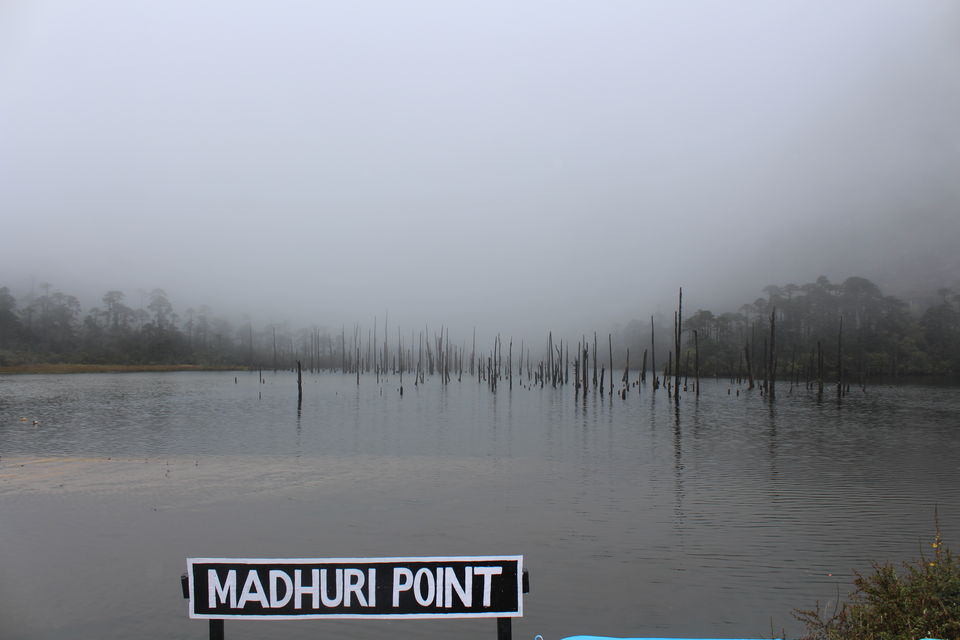 The last day of the Trip. We started the day early as usual as we had to catch the flight at 3:30pm from Guwahati to Delhi. We covered 170Km in just 3.5 hours as roads were good this time around. We returned the bike and got into a cab to airport to board the flight.

The essence of the journey was to hire the 350cc bike and not the 500cc bike, as the parts of the these bikes are more common and easily available.