Friday night, 6 friends in a Scorpio, started the journey from the jam packed Outer Ring Road in Bangalore. After crossing the city, we came across all kinds of roads, some similar to an airport runway, some that had potholes more than bituminous, some having bushes on either sides leaving the narrowest width possible for a car to go through and some with unnecessary speed breakers only to ensure that commuters passing-by don’t even dare to sleep.

Unfortunately, by the time we hit the worst conditions, it was me driving the car, and that being my first time with an SUV, everybody had a tough time in catching slightest of comfort due to the inevitable bumps. The best part I noticed was, everyone suddenly became hyperactive and started directing me and so, somehow it all got fun. After a while, the fuel tank signalled red and shockingly there was no petrol bunk nearby. Few kilometres ahead, we found one but it was not operational in the midnight, we had no other option but to park and wait on the road itself. In the meantime, we dozed off in the car itself.

In couple of hours, the Sun rose, petrol bunk opened and we got the tank full. My driving turn got over and I chose to take the back seat so I can use the space for stretching my legs and a short nap.

Sometime later, my eyes opened while we were cruising on the hilly roads, and I see windshield exhibiting the lovely view of white snow coming in contact with the lush green trees.

We halted at the very first shop on the way for morning tea and snacks. Cutting Chai in chilly weather on the hills is a perfect ingredient to energize the body.

After a quick break, the journey continued on elevated roads, as we headed towards the Gokarna city. Just before reaching the city, we passed by the Aghanashini River. 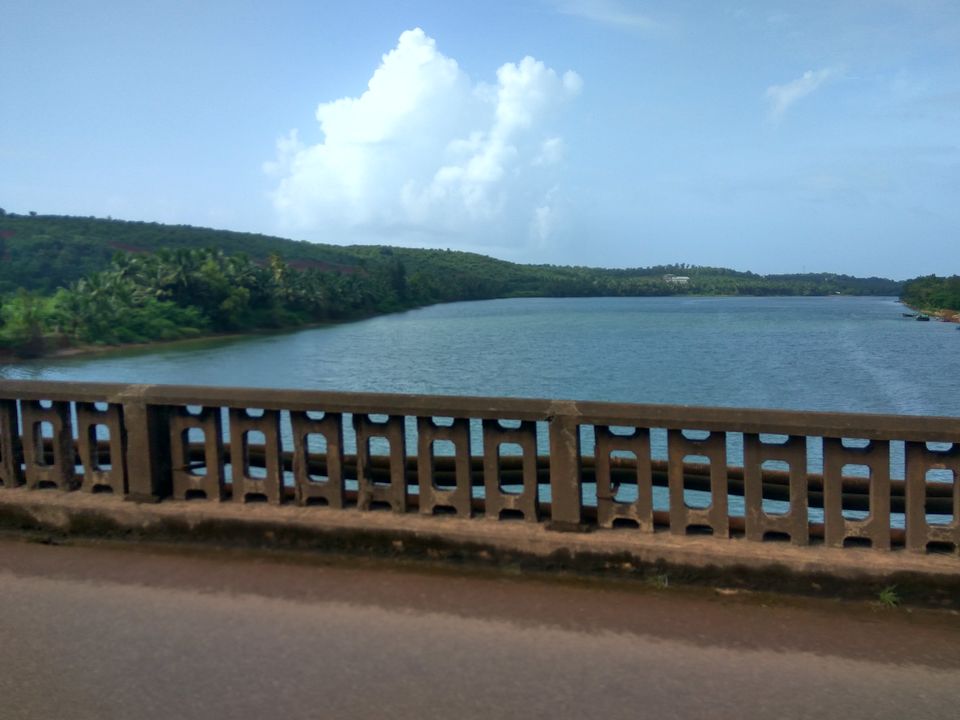 Since we already booked a resort to stay, the usual hotel hunting and the business of asking directions was eliminated. We reached the resort at 10 am, their check-in time being 12:00 noon gave us couple of hours to chill out. The resort had a beautiful lawn with abundant greenery, a clean looking swimming pool and a not-so maintained Indoor games room. 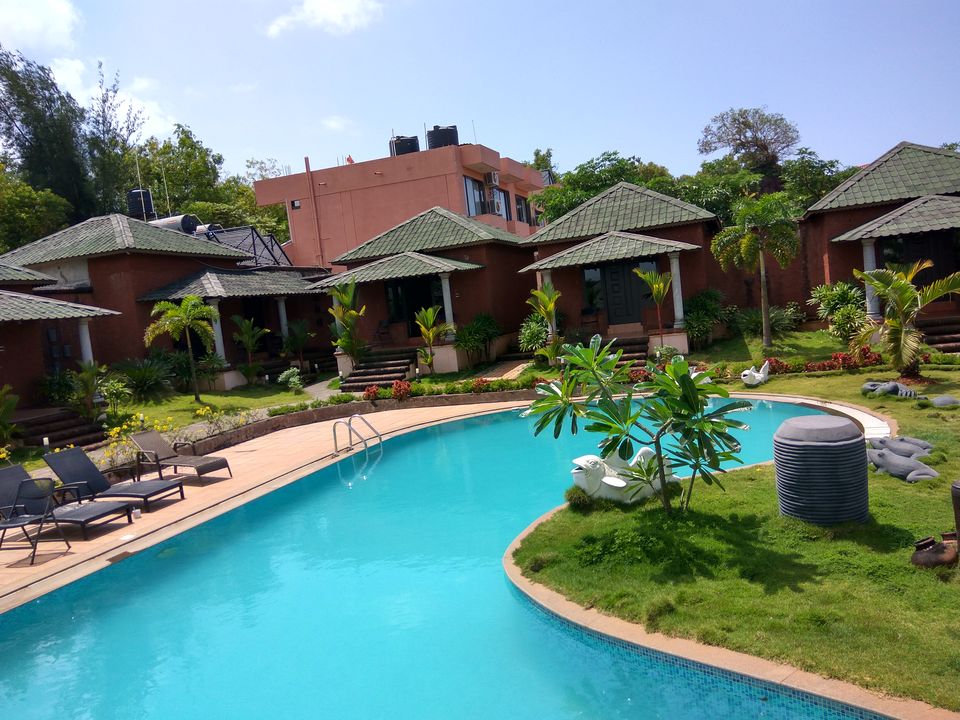 We started off with few matches of table tennis, followed by breakfast which was supposed to be quick (but their service made it long-lasting). Nevertheless, the thought of entering the pool had already sneaked in and we got ready to embrace the excitement. 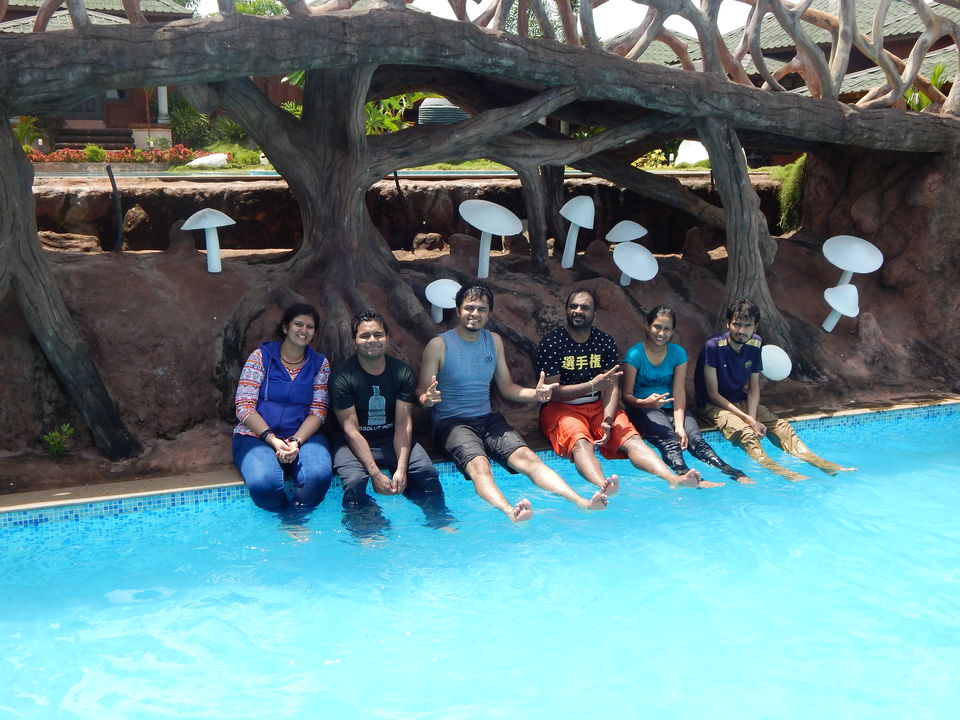 It was utilized for every damn skill that could have been pulled off by at least one of us. After all the fun, we immediately got ready and left for the much awaited excursion. 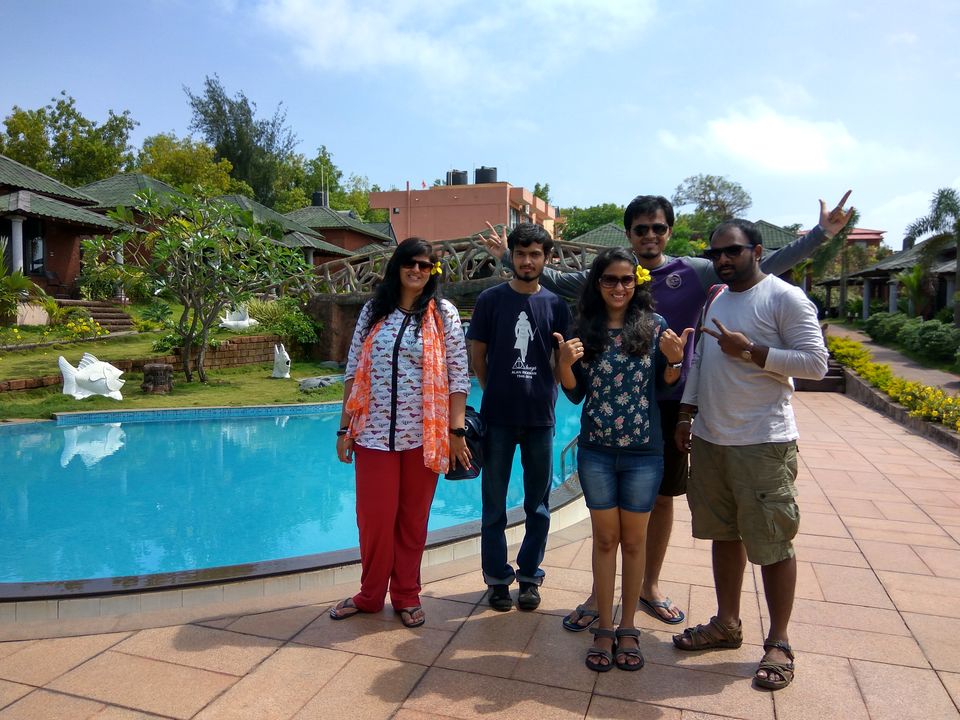 The very first spot was Om Beach, named so because it is shaped like the auspicious Om symbol. 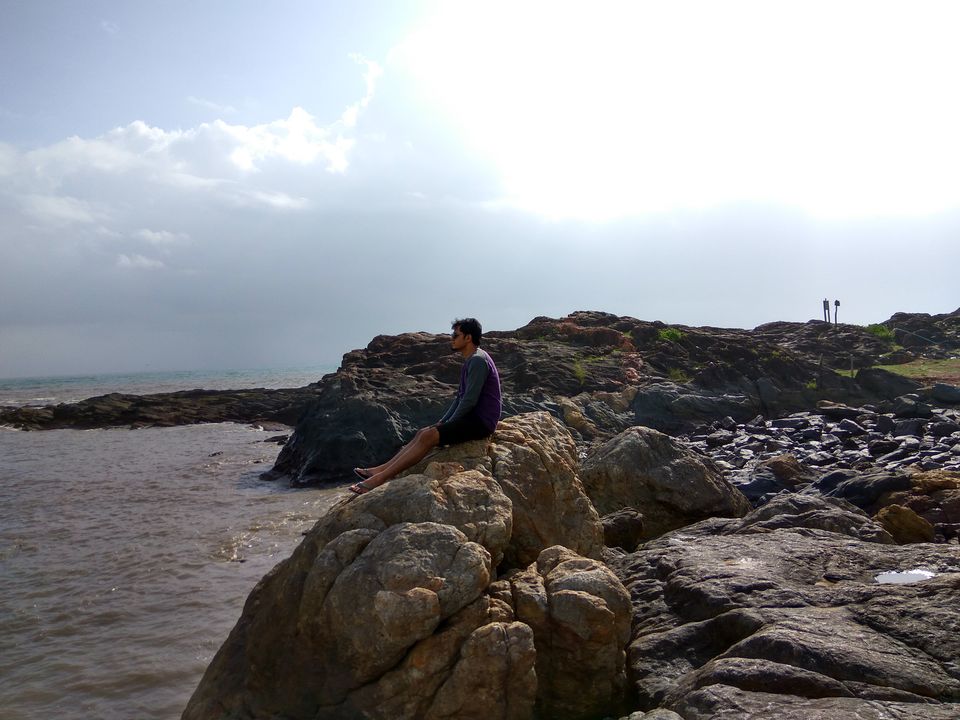 All of us were already starving because of the exhausting stints in the pool so we hit the Namaste Cafe, the only restaurant on the beach, very well known for its seafood. Their cuisines were nothing but a delicious treat to our hungry stomachs. 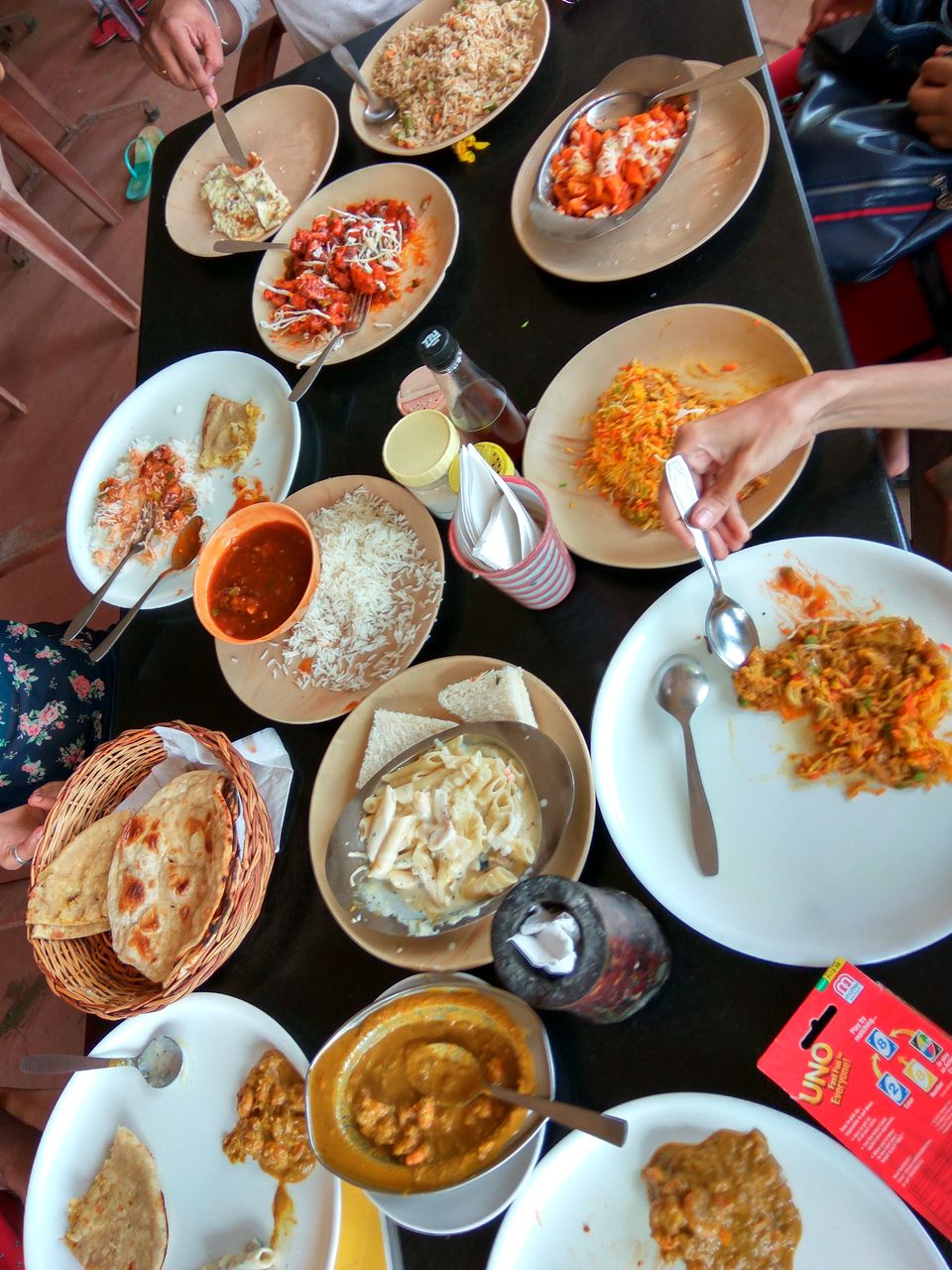 Post lunch, the plan was to visit Kudle beach. We heard that it could be reached by boats taking the route from Om beach but then it started raining and boats were not allowed then, so we rode back to the city, but once the rain stopped we headed towards the Gokarna Beach. 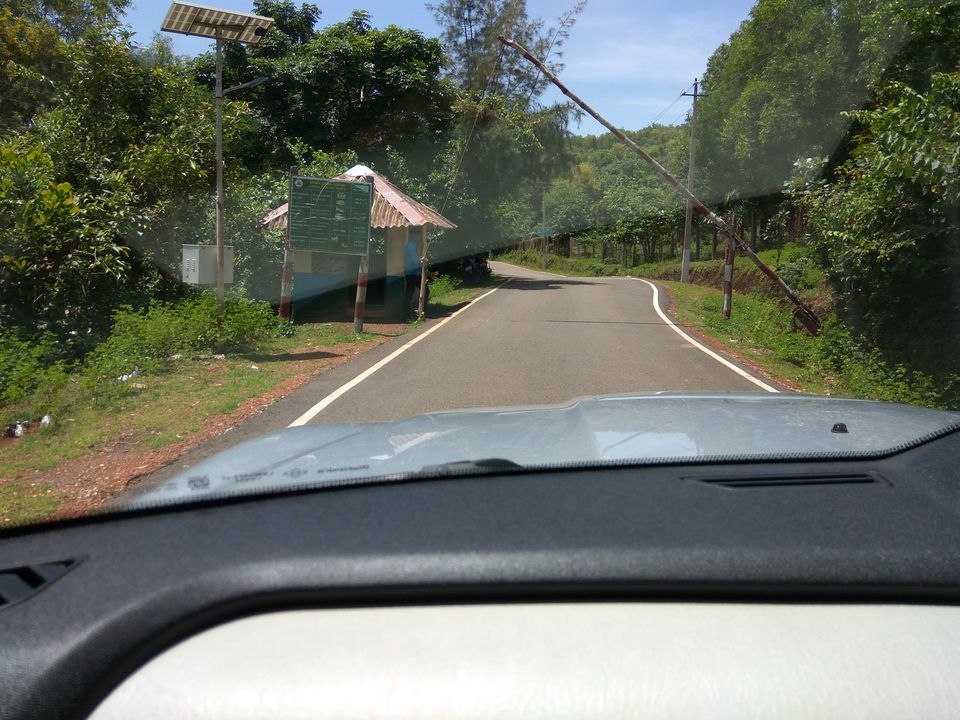 Gokarna beach is several kilometers long and is situated at the edge of the town. 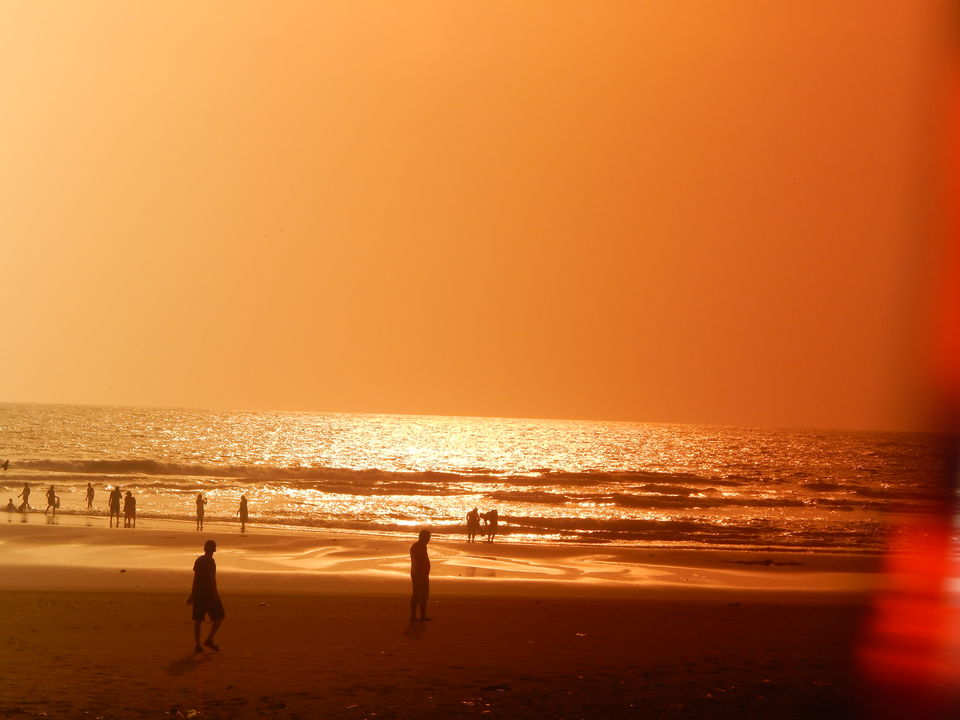 Walk a couple of kilometres north from town along the beach, and it gets much nicer and more pristine. 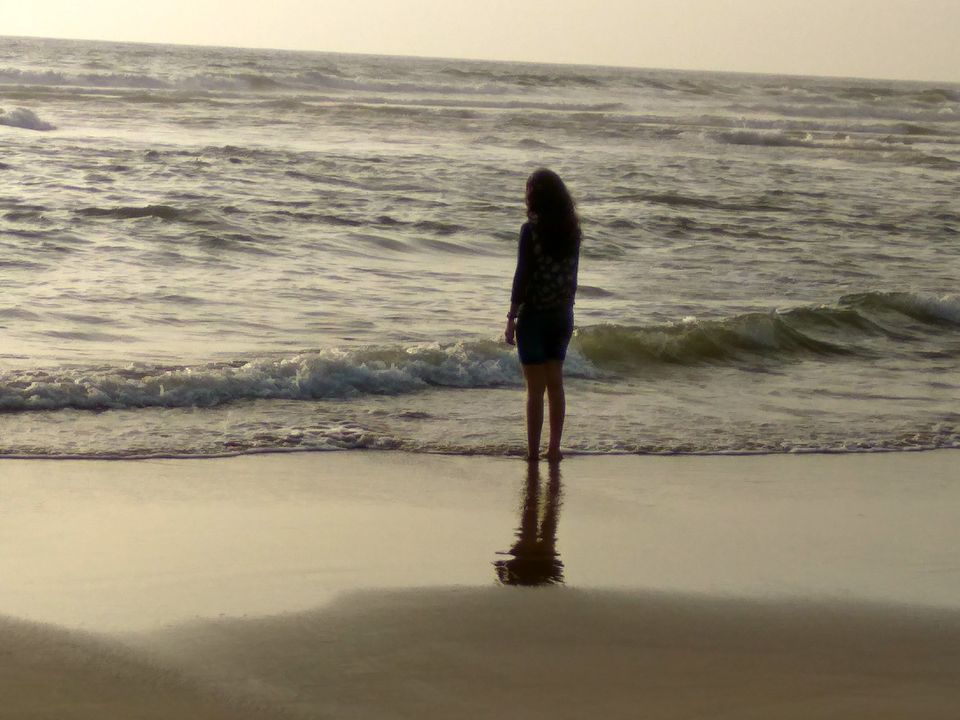 Next, we hit Kudle Beach which is on the south of Gokarna beach, accessible by a narrow road followed by a short downhill walk. 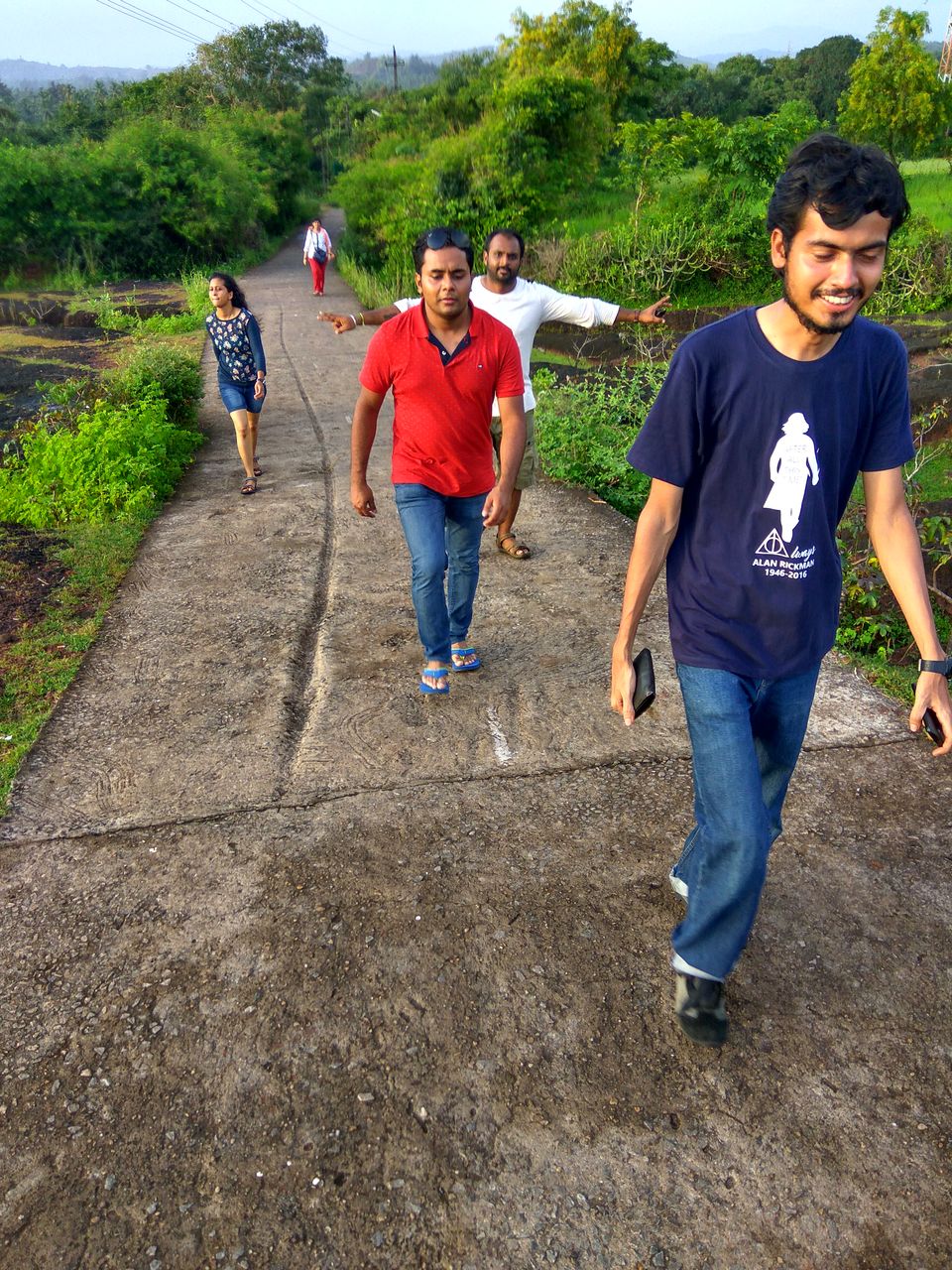 It’s a clean beach with spectacular view of contrasting multi color shades and spine chilling waves forming whirlpools all around. 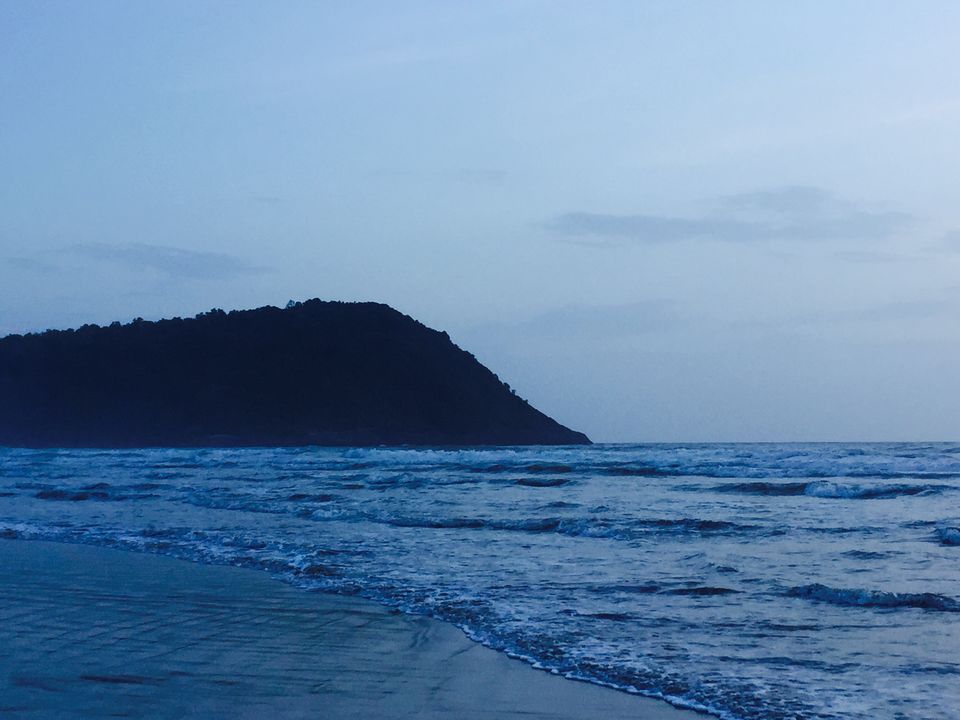 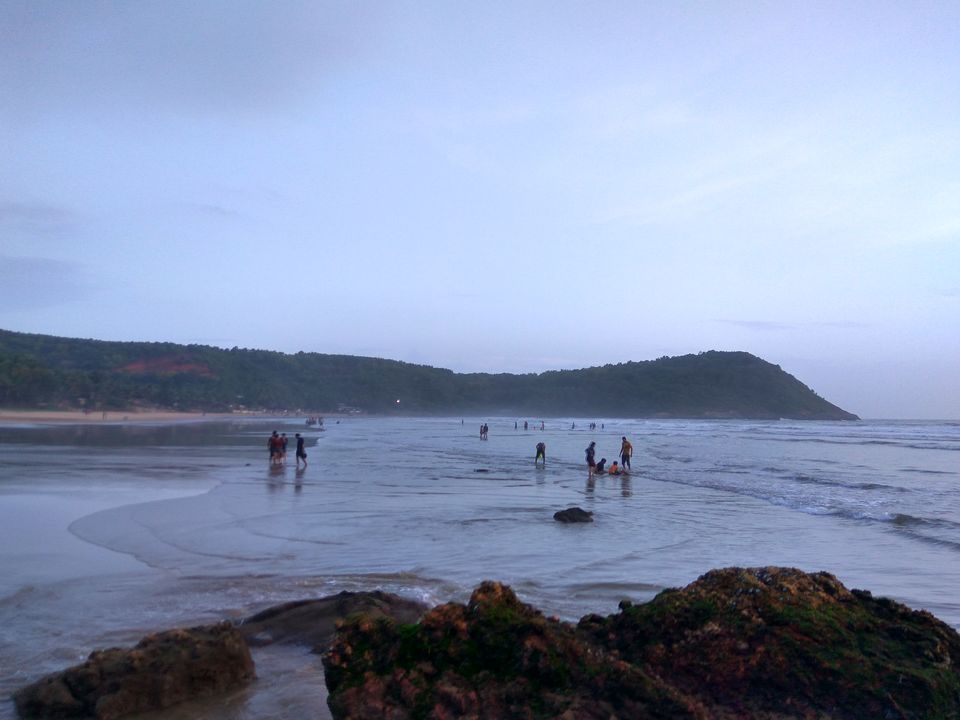 We chilled out in a cafe after the sunset, enjoyed some local delicacies and then left back as it got dark. 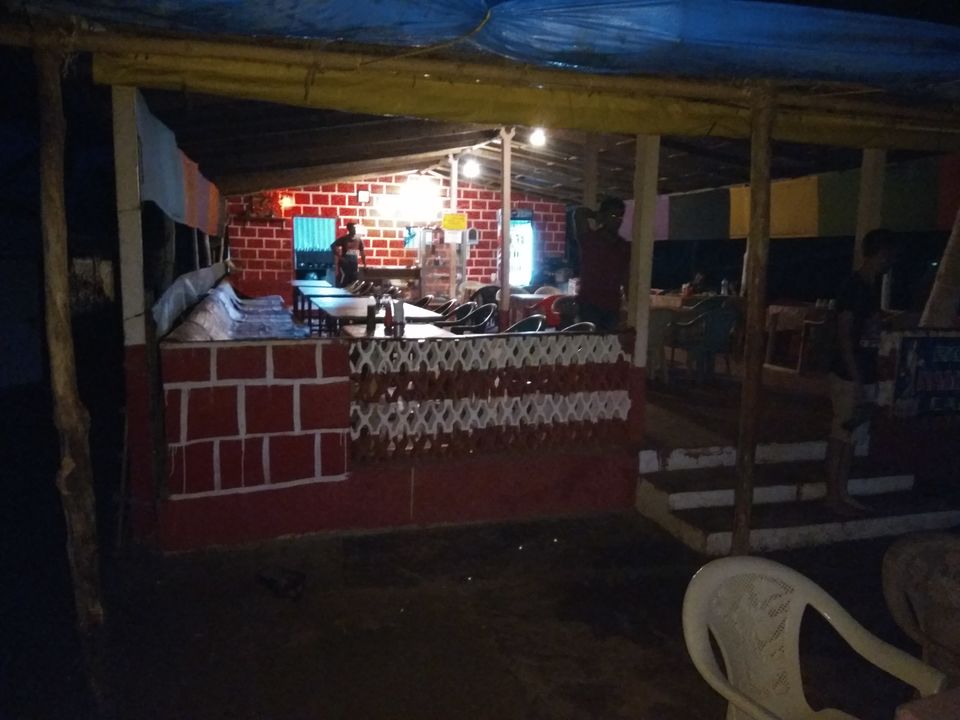 Reached back to the resort in the night and witnessed a wonderful view of the beautifully lit pool side and a sparkling ambience. After dinner, we sat around for some rounds of UNO and planned the schedule for next day.

As the lights switched off, a very eventful and tiring day came to an end.

Day 2 had a much lazy beginning, as expected, but we got up as early as possible since we had to checkout. Started the day with Om beach again and noticed high tide in the sea, waves easily crossed the mark where they ended the previous day and so even today we could not ride on the boats.

Next spot in the list was Kotiteertha Lake, a lake that was not known to many localites. We wondered why! Well, on reaching the location, a closer look made it all clear as it looked more like a pond surrounded by houses and being used by the people for religious rituals, bathing and what not. 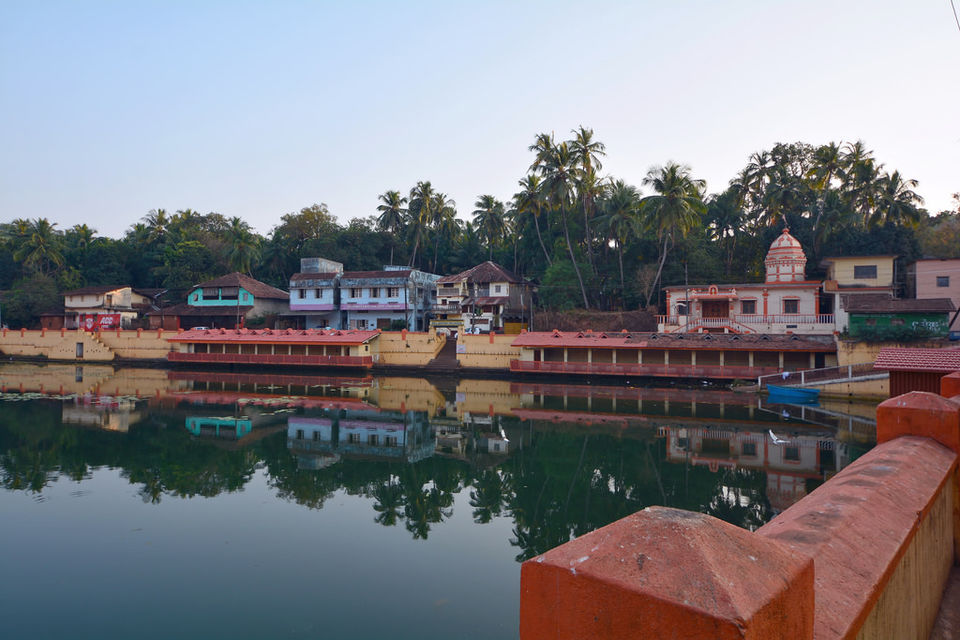 The final destination of the trip was Mirjan Fort. 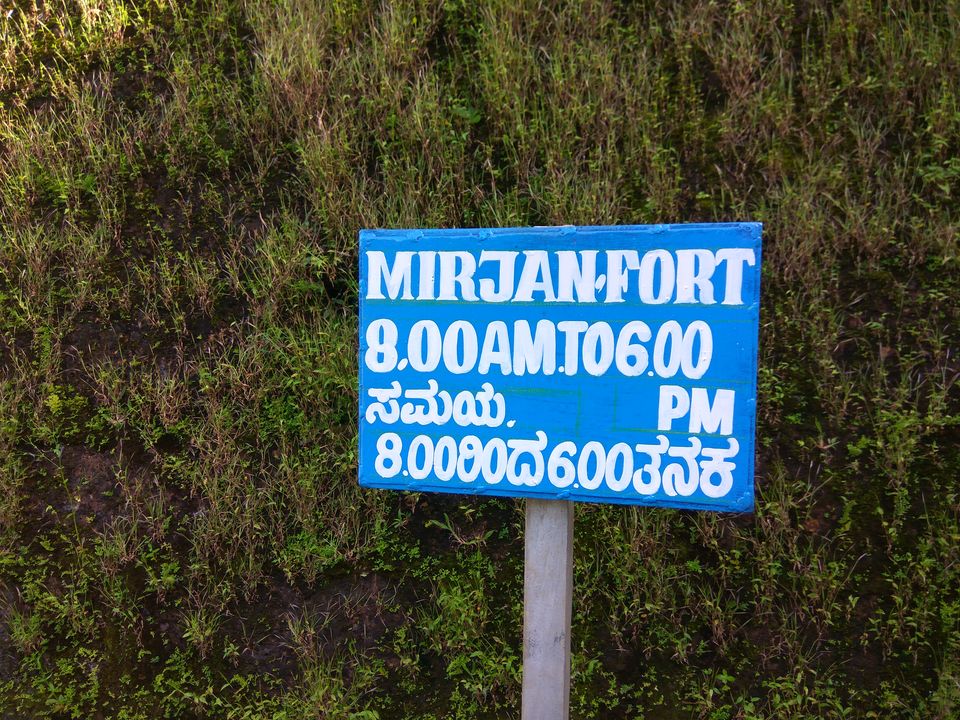 It is around 10 kilometres from Gokarna. The fort known for its architectural elegance was the location of several battles in the past and now is a very serene spot that offers lush green view all around. 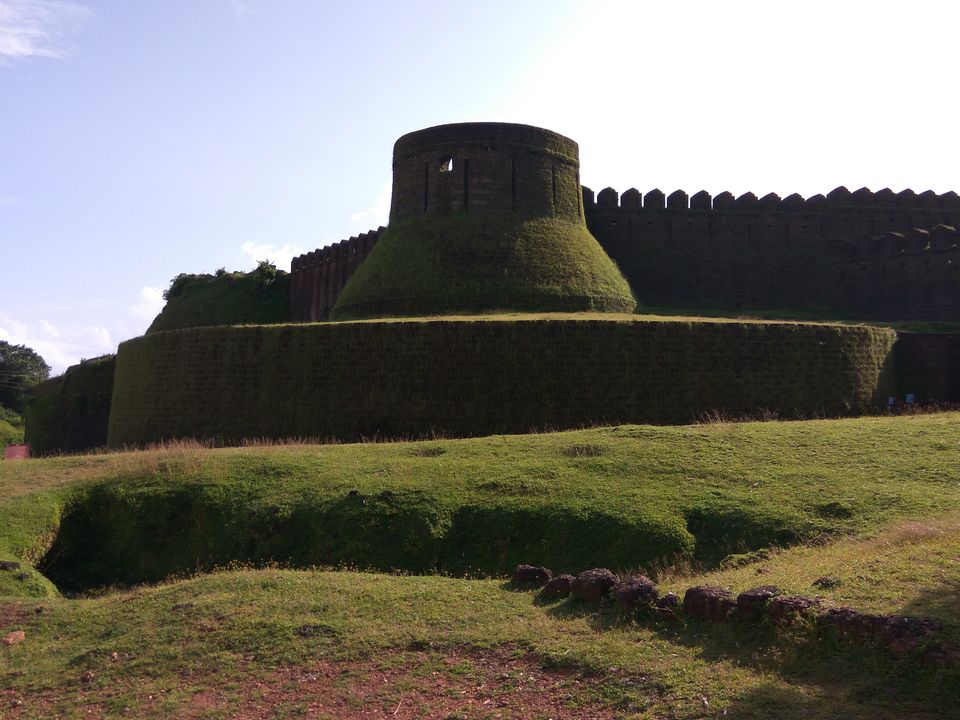 We spent good amount of time in exploring and discovering the historical facts of the place. 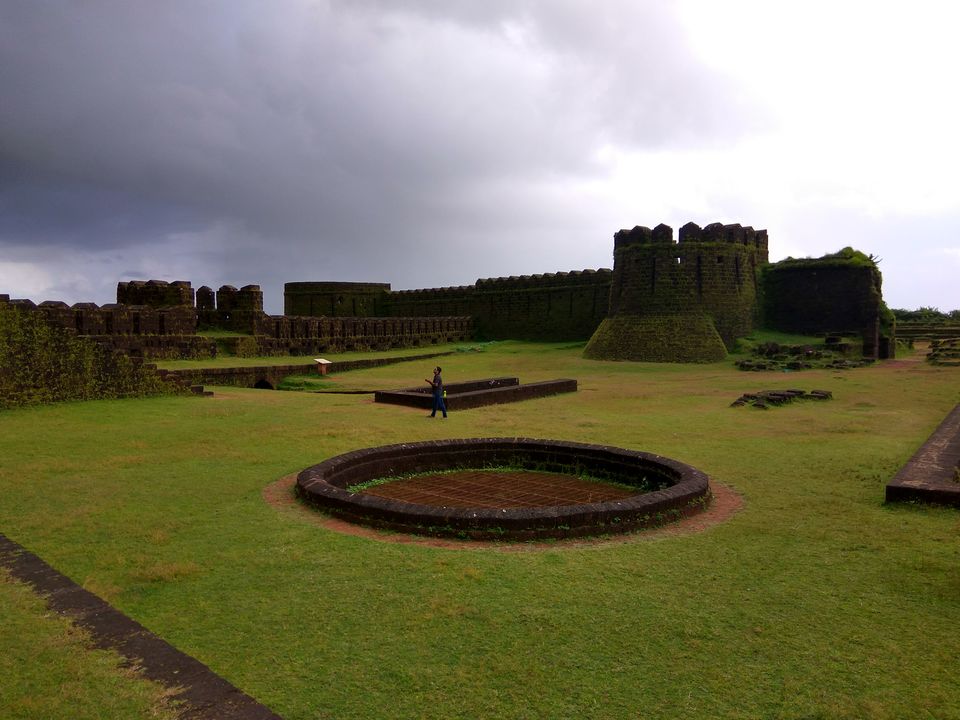 By evening, we departed from the fort and the city and took the road back to Bangalore. 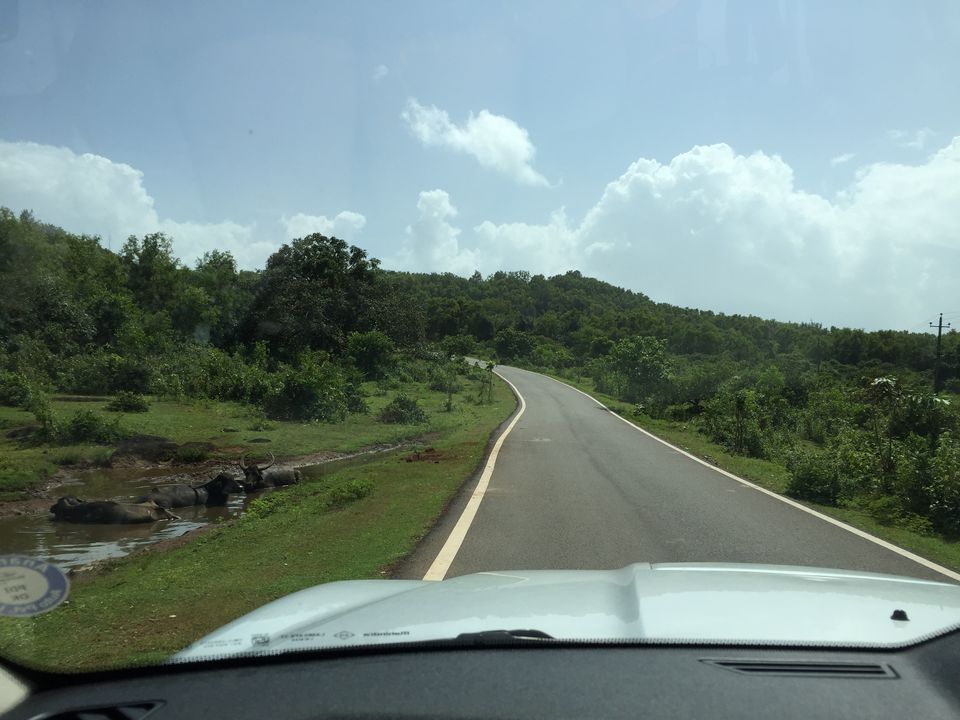 "The world is a book and those who do not travel read only one page" - St. Augustine