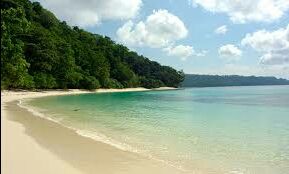 Visit Carbyn’s Cove Beach. This lovely palm fringed beach is 7 kms from Port Blair and is ideal for swimming and sun-basking, after this visit to the famous memorable “Sound and Light Show” at Cellular Jail showcasing Indian Freedom Struggle is a not to be missed event.

In the morning start for a full day tour by boat to visit Ross Island from where Britisher’s governed the entire Andaman and Nicobar Island, prior to India’s Independence. Then visit to North Bay Island (Coral Island) a ideal spot for coral viewing by glass bottom boat (Optional activity Snorkeling). 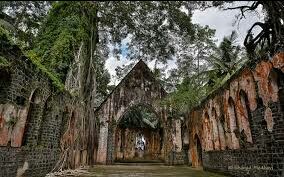 Leave early morning for an overnight trip to the Havelock Island. An inter-island ferry is arranged for the transfer to the island, which is around 57 Kms from Port Blair. Stay overnight at a nice beach resort located close to the sandy beaches and green forests. Radanager Beach, Kalapatter Beach Over Night Stay At Havelock. 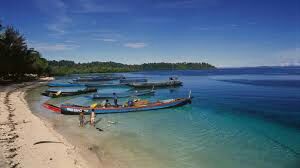 In the morning, move out for a full day excursion to Red Skin or Jolly Buoy (Coral) Islands in the Mahatma Gandhi Marine National Park- to see coral reefs, exotic varieties of beautiful ornamental fish and other marine life. The glass bottom boat ride helps one to take a closer look at the vast coral colonies.

Port Blair – Baratang - Early morning departure by car from Port Blair to Baratang which is about 110 kms. By road. The travel involves crossing of creeks and dense forest. Reach Baratang and sightseeing to Mud Volcano and Lime stone cave.

In the morning visit to Mount Harriet which is the highest peak in South Andaman’s. & 20rs note view

Transfer to Airport or Harbour for return journey.

Transfer to Airport or Harbour for return journey.

The trip to the Andamans was really life changing for me since it was when I truly discovered nature. Let me share an experience with you on the beach in Havelock Island which really changed me as a person.

A draught blew by me taking my spirit with it. The strands of hair crossed my face; the sun peaked its way above the horizon as if it was scared to shed some light. The smell of the salty sea tingled my nose as I breathed in a breath of fresh air. The sand was a mine field of corals, with a collection of many different multicolored sea shells; however at the same time, the sand was a bed of blankets. The way the sand flowed onto my feet and out to the spaces between my toes made my heart somehow pound like a synchronized drum beat in a marching band. It was as delicate as a new born baby; the grains were so fine that it could not possibly be visible by the human eye. The waves were singing me a dulcet lullaby, making me reminisce my childhood and drawing me closer into them. They were inviting me in, with their everlasting arms wide opened but my feet wouldn’t listen at this hour because the frigid waves penetrated my feet. So I sat down, watching the sun stretch its way out of bed.

As minutes ticked by, the warm rays gradually glowed; he greeted me with a friendly hello. He reached down towards me and shined a streak of light as if he wanted to lend me a hand. The blazing light pierced through my cold skin and gave me an immediate boost of excitement. The sun worked his way up to the sky, distributing its power to everything at its sight. Birds were singing into my ear with high spirits, roaming around the sky trying to claim it for itself. The sky shed its color from dark misty indigo to an illuminated shimmering blue sky. Fluffy clumps of clouds that were covering the sky before slowly fainted away into thin air and the crystal clear waves sparkled like diamond and the cold waters began to heat up. I walked up to the edge of the beach again and dunked my toe into the water. It felt as if my numbed foot from before melted into a puddle mixed with the ocean. My acidic stomach turned to its side as the pungent smell of decayed algae filled the air. I could hear the fish in the ocean screaming for attention; at the same time I could smell their fear toward the sea gulls that were hungry looking for any fish in the water for lunch.

People began to come out of their homes and enjoy the extraordinary gift God has created for us. Eventually, the beach became a room filled with laughter. Children are scooping up the featherlike sand and remolding them into magnificent image of their wild imagination. I stretch my legs and slouch down on the platform of the beach; with an ice cream in one hand melting its way to freedom, I spy on everyone on the beach. A group of teenage boys are playing tag with the girls as if they were kids again; the beach really did bring everyone closer to each other and bring back memories of your childhood. Everything was possible to do at the beach. From the way people dress to the things they do, it describes them and their unique personality. Mad balls are thrown around in the air as people play volleyball, football, soccer and all sorts of different ball games. Sweat dripped down everyone’s faces after playing hard out in the sun; some race to reapply sunscreen on their dehydrated flashed red skin whilst the others take a dive into the ocean to cool off. Water is splashed everywhere from the people fooling around and the reflection of their faces showing a huge grin are drawn on the waves. The waves show a smile in return and create a huge wave that carries everyone safely back onto the shore. Out onto the far ocean, I can see glimpse of people riding jet-skis racing as fast as a bullet toward the never ending horizon and up above; a humongous shade of red, blue and green drizzle onto the shore as the parasails fly back in for landing. The sun is getting tired and is slowly lying off its heat; towels are given out and the shops alongside are packing up getting ready to close down. I could smell the success they have earned today and their high hopes for tomorrow’s work awaits them.

The day is ending, and slowly one by one, people are leaving after an exciting but tiresome day at the beach; however I could almost see their lively hearts smiling at me. Some stay around to see the spectacular view of when the sun sets and make a wish upon the horizon. Finally the sun dipped into a pool of internal light, and the reflections of the waves saluted me as if for a moment I was part of the beach. 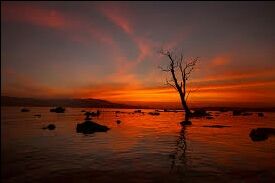