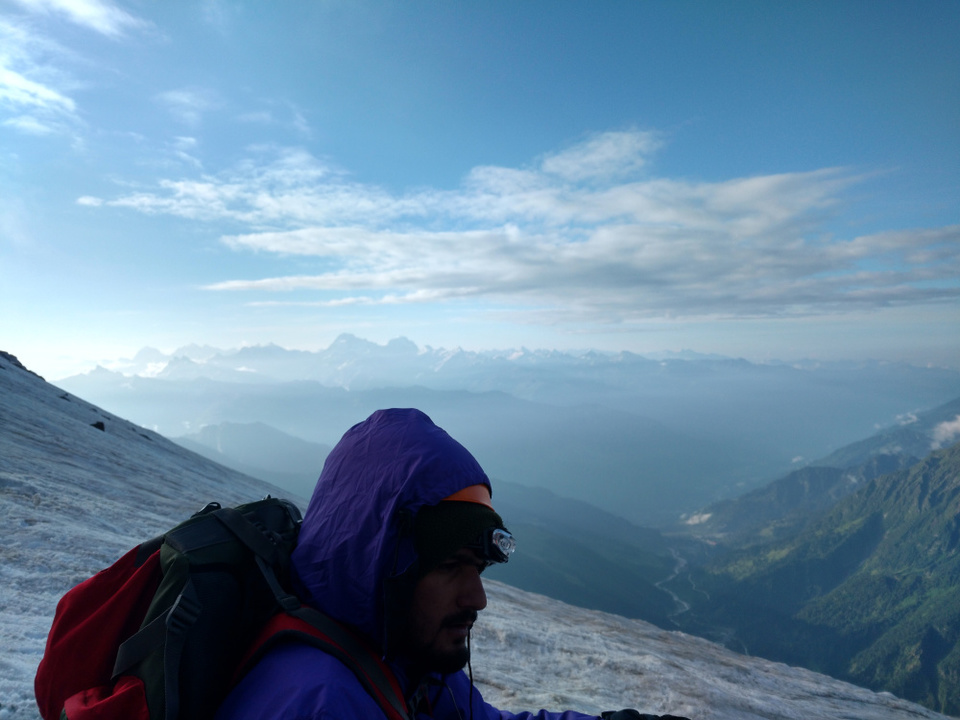 The dream of accomplishing my first summit started when I got the confirmation call from Atal Bihari Vajpayee Institute of Mountaineering and Allied Sports (ABVIMAS), Manali for the 196th Advance Mountaineering Course(AMC). It started from 29th of June 2018. In total there were 44 trainees for the 196th AMC. For the first 10 days, we all had our rock climbing training in the Aleo rock faces.

On the 11th day of the training, we started for Solang Nala, a 13 kms trek and on the following day, after having a wonderful 11 kms trek, we established our Base Camp(BC) at Bakar Thatch. Though the roadhead has been extended to Dhundi, we hiked up the whole route.

Our Base Camp at Bakar Thatch

We had our snow and ice trainings at the Hanuman Tibba Glacier from 12th July till 18th July.

It was a suspense on the 19th day of the month for whether we will start for Lady Leg or not, our destined Camp-1, as it was raining heavily. Our instructors told us that we will start that day only as according to the weather forecast, the following day will be clear and bright for the summit attempt. So we started for Lady Leg at around 11.30am after drying the ropes and packing up the high altitude tents.

Friendship peak, looming at an elevation of 5289m or 17,348ft comes under the Pir Panjal Range of the Western Himalaya, was first climbed by three climbers of three different nations of India, Britain and America in 1927-28.

After hiking up a steep terrain from the right side of Beas Kund, the whole team reached camp-1 at around 13:30hrs but all were sitting under the cloudy sky as the mules hadn't arrived then. When the mules arrived, the rain had partly stopped and all the members rapidly pitched their tents.

Friendship Peak peeping out from behind the clouds. The view from Lady Leg.

The instructors took us to an acclimatisation walk to a rocky knob at above 4040 meters at around 16:00hrs and when we returned to the camp, it was dusk. The dinner was served early at 07.30pm as the following day will be the summit attempt.

On the 20th of July, we all got up at 02:00hrs wearing three layers of clothes, when we were able to see the stars gleaming after nearly a few weeks. The breakfast of Dalia and Maggi was served and immediately after that there was fall-in at 03:00hrs. Kiran Sir and Pyarelal Sir were leading the whole team which started for the summit bid of Friendship Peak (5289m) at exactly 03:03am by litting all the head torches. We reached the snowline at around 04.30am from where we started our approach march by wearing snow boots, crampons, harness, helmet, gloves and the googles.

When we reached the Col, the weather was clear and we got ready to rope up.

There were 6 members in each rope where I got a chance to lead the team uptil the fixed rope done by the instructors.

By reaching the fixed rope, we clipped ourselves and started climbing after eating some of our dry foods. The gradient was a mixture of easy and moderate slopes and there was loose snow filled all around. We were able to see hidden crevasses where the instructors told us to be aware. At some places the snow got hard. It was 09:00hrs when the weather slightly started deteriorating. On the southern side, Hanuman Tibba(5932m) got behind the dense clouds and on the west side there was a gully from where we were able to see O-peak. By crossing a small rock band, taking 10-15 steps at a stress, breathing in and out at each step, and taking rest for 20 seconds, we reached the summit at exactly 09:32hrs through the south-east face when there was a total white out.

We all were congratulated by the Advance Mountaineering Course instructors and by also the Basic Course instructors through satellite phones. We were allowed to stay at the summit for 10 minutes and then we started descending quickly where we felt the exigency of fixed ropes. We safely descended to the col at 10.15am where we took off our crampons and glissaded till the snow line as the weather became clear again. Then we all ate our dry ration provided by the institute, carried the equipments and at around 13:00hrs got down safely to Lady leg where we had our lunch.

As the weather was pretty much clear, we all descended to Bakkar Thatch, our Base Camp safely and then celebrated for our successful climb.

We should always conserve our energy and keep moving, and should always have a willpower to achieve something. That's what I realised after having the successful ascent and decent of the Friendship Peak.