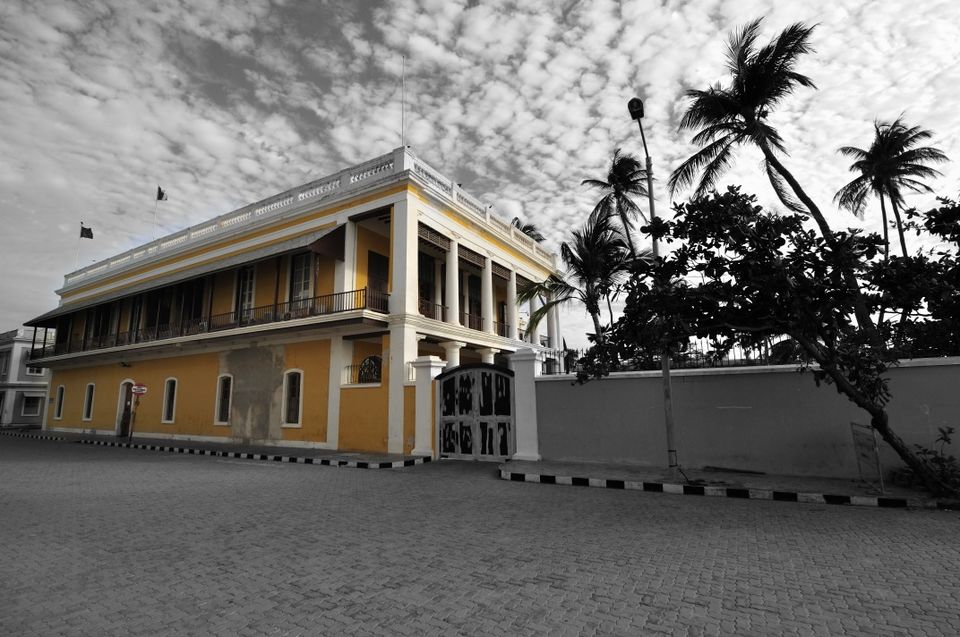 It was July 2013. The first gush of monsoon rain had already kissed Kolkata. The air was moist and there was a general dullness around. During the rainy season Kolkata offers you dreadful water-logged streets, long and hellish traffic jams and incessant downpour that could remind one of an infinite freight train. The weather affects you with a weird dejection. Being a hardcore Kolkatan, I am not off that rack. I badly needed a break from the deadlines and downpour.

I am an advertising professional. The work pressure was low. And while I was chatting with one of my friends on FB, a brilliant idea came on our way. My childhood buddy Tanu came up with the thought. She asked me whether I could take a 3-4 days off and go tripping to Pondicherry with her. Pondicherry is a small town in Tamilnadu. During colonial times it used to be a French colony. Still after 60 years of freedom the essence of French culture still rules large in this beautiful scenic town

Anyway, I didn’t think twice over Tanu’s proposal. That very day we I booked my flight tickets to Bangalore and asked my boss with a smirk that I would need a break. The otherwise grumpy team leader instantly granted me a week.

I met Tanu at Bangalore airport. It was a hazy evening in the IT town. She said that she had booked the bus to Pondicherry on that night only. Well, I was taken aback for a while. However so many thousand miles journey from Kolkata to Pondicherry via Bangalore on the same day gave me a sense of extreme thrill. We quickly grabbed something on the go. Tanu was carrying her luggage with her. So we landed on the bus terminus taking a quirky auto ride. The bus arrived on time. It was a large Volvo carrier.

I was too tired. And the Air-conditioned cabin of the luxury coach was inviting enough for a good sleep. The bus rolled the wheels and the scenery started changing. The city lights soon faded into hilly backdrop. The pale moon on the sky was the soul witness of our journey to the old French town. I was sleepy, dead sleepy! But still I watched the meandering streets, small little towns, the unknown villages from the large glass windows of the bus. Slowly, my eyes gave in.

Next morning, Tanu woke me up. We have already reached destination. I was fresh after a goodnight’s sleep. So like a jumping jack I climbed down from the bus. The hotel was pre booked. We had our place ready at Park Guest House of Aurovindo Ashram. The guest house was at one end of the broad marine drive. We asked an Auto Driver whether he would take us there. He showed us the backseat. We got onto the Auto. The three wheeler took a sharp turn and there was Bay of Bengal welcoming us. The Marine Drive was beautiful- it would remind one of the French Riviera. On the one side of the drive the two sides of the Marine was guarded by well-constructed and neatly maintained boulevard. Could we call it the boulevard of shining dream! Well, almost. We asked our driver to stop the Auto. We paid him the fair and got down. Tanu and I started walking along the gravel stoned boulevard. We were facing the sea. It was early morning and Pondicherry was still waking up from its slumber. On our way we saw tourists from other parts of the world too. Few were Americans, few French, few from South-Eastern countries. They were taking a brisk morning-walk along the sea shore. Some were playing guitar and singing, some were holding the mellow sun in their eyes. The rhythm of life was much like soft John Coltrane jazz. Everyone on the marine drive was like Somerset Maugham’s “Lotus Eater”. They were there to soak into the beauty of the place. The call of a hectic urban life could not bother them.

As we were walking we saw on our left side a small little café-“le café”. White colonial building, with an open terrace and a garden on the first floor. There were round tables spread. Tanu suggested that we meet our morning coffee there. The café was just opening its doors. As we entered the Tamil attendant welcomed us with a broad smile. We saw the menu card. There was staple South-Indian platter and also the continental spread. We just ordered for two cups of strong Americano and few cookies. The coffee was brilliant. It helped us shake off the last remainder of the laziness. We sat there for a while and meanwhile the town started becoming a little more active. We could see the children going to school, newspaper vendors pulling their cycles, the town was settling down to its daily score.

Park Guest House was at one end of the marine drive. We reached their by walking. From Le Café it is a good 10 minutes’ walk. The receptionist welcomed us with a smile. After doing the necessary paper work we found ourselves in the cozy room. The rooms are modest but they have every facility that you can ask for. The best part of the guest house was that there was a large park just in front of the guest house there was a well maintained park. The park overlooked the sea. And there were small sit out areas spread across the park. So after getting fresh we sat there to watch the rolling deep. Like I mentioned, Pondicherry is a sleepy town. It absorbs beauty with all its senses. Hence the tourists must visit the place with a tranquil mindset. If anyone thinks that the holiday at Pondicherry will be action-packed then the person will be grossly wrong. You need to acquire a slow tempo to enjoy the sights and sound of Pondicherry. I and Tanu sat at the park for long. We saw the different moods and temper of the ocean. We met few French people who had come there to do a project at Auro-Ville.

Now, Pondicherry has two very distinct selves. One which is earthly and the other which is spiritual. The town is known for Sri Aurovinda’s Ashram. Spiritual peace seekers from all across the world come here to visit the Ashram. The Ashram offers peace and tranquility to the stressed and wandering urban minds.

We hired one bike from the guest house and started exploring the town. The mythical lanes, the bright yellow colored colonial buildings, the smell of exotic incense sticks, the little street restaurants together created a magic for us. We thought that we must be living our dreams. As we rolled on wheels we saw many art and handicraft stores by the side of the streets. One could get many things in those shops. Starting from handmade soaps to incense sticks to wooden showpiece to cute little key-chains to yoga mats – everything. The famous accessory brand Hidesign is head quartered at Pondicherry. Their shop could take away all your budget. So beware! Their collection is envious and tempting. Interestingly enough, Hidesign also has a boutique hotel in Pondicherry right on the marine drive. The restaurant is also ravishingly pretty.

We parked our mo-bikes and decided to have our lunch at Hidesign restaurant only. We ordered for a French platter.  We had Spring Nicoise Salad, Crab Cake Salads and Roasted Turkey. The lunch was ‘fingerlickingly’ good. After the Lunch Tanu suggested that we go back to the hotel to catch a siesta. I nodded instantly. The atmosphere was such that our eyes were all set to give in.

After the siesta when we got out from our hotel, we saw Pondicherry in a different colour. The marine drive crowded. There were food vendors of different kinds. There were cheap and easy handicraft sellers. People were sitting on the boulders by the sea and chatting. The lovers were busy finding cosy corners. And the Le Café which was almost empty in the morning was full of people fighting to get a place to sit. Looking at the crowd we headed for a quieter place. We found Le club. A quiet garden pub. The ambience was really picturesque. They were playing the country hits of the 60s and 70s. And the best drinks were at the bar. The food menu was also delicious. We quickly ordered for two Budweiser and Beef Stake. The evening started to move on in a nice pace. We chose a corner table, from there the entire place was seen. So we kept a good watch on the gathering crowd. The visitors were mostly French and Americans. Le Club was basically an old colonial building which they turned into a garden pub and hotel. The large courtyard and the rooms after it could remind one of a Mediterranean setting. The colour of the walls were bright yellow. The walls were beautifully decorated with paintings and European artefacts. The atmosphere was quite heady. I and Tanu revisited many memorable moments of the past. And the bottles of beer were thronging on our table one after the other. The clock struck 11. The chief attendant rang the bell and announced that it was closing time.

Unwillingly, we had to leave the chairs and come back to our hotel.

Next Morning, it was our turn to experience Auroville. So we hired a cab from the hotel and went to Auroville. It is a joint initiative of France and India in Pondicherry. Aurobindo Village. From there the name Auroville has arrived. Here, people dedicate themselves to do various developmental work. They help economically poor people to achieve a certain scale of social elevation. Through special training sessions here these people get different ways of living that help them run their livelihood. There are various exhibition centers at this place where various handicraft work is put on display. Moreover, there is a huge dome in the midst of an open field at Auroville. People from any religious background could come and meditate here. The structure of the dome is unique. And it solely run by solar power. We spend few hours at Auroville. Since luck was not by our side hence we could not find an entry to the meditation hall. So with a sad heart we had to see the hall from outside. We reached Auroville at 12 ‘o’ clock. It was already 2 30, so we were supposed to quickly finish our lunch. There was a large dining hall inside the compound. We had a South-Indian veggie meal there. After the lunch we came back to hotel. The cab driver insisted that we visit the main market area of Pondicherry. But we were just not ready to come out from our dreams that the French part of Pondicherry had infected us with. We headed for the hotel. That evening was marking the end of our trip to Pondicherry. We knew that we had to go back to our cubicles once more. Hence, we were visibly morose. But then again we had to live the last evening at Pondicherry to the fullest. So, after catching a power nap we found ourselves on the marine drive on an evening stroll. We were filling our ears and eyes with the sights and sounds of the place. The rest of the evening was spent on the terrace of the Le Café. From the terrace we heard the sound of the breaking waves of the sea. Far away we could spot the blinking lights of  fishing trawlers. In the meanwhile, the sky started becoming heavy with cloud. There was streak of lightening too. Maybe, it reflected our minds. We climbed down the stairs and hit the street. Our feet were dragging us back. But alas! For me Kolkata was waiting and for Tanu it was Bangalore.