The Great Stupa Of Sanchi

The Great Stupa of Sanchi 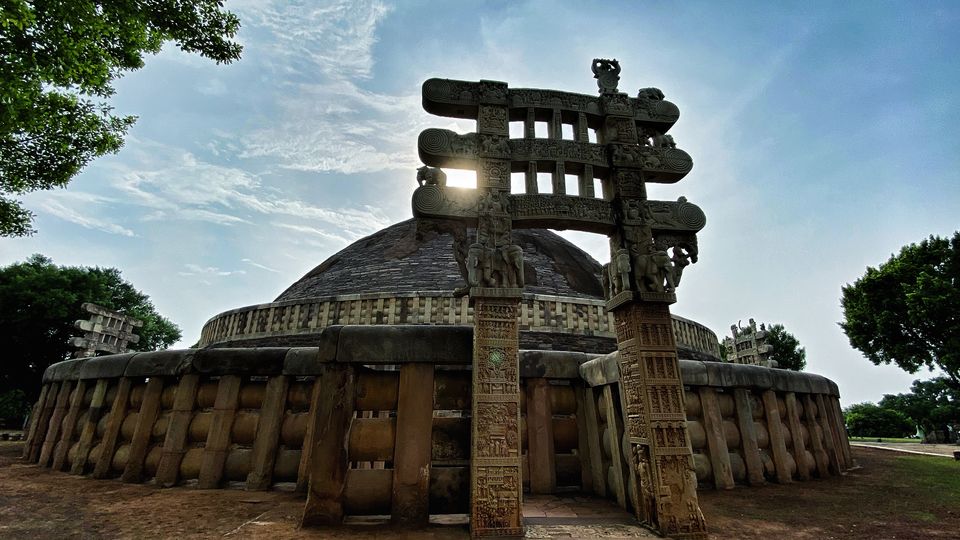 Situated at a distance of almost 50 km from Bhopal city, Sanchi is not just another small town; in fact it is a very popular Buddhist pilgrimage destination because it houses a UNESCO World Heritage Site, The Sanchi Stupa which is one of the oldest Buddhist monument in the country.

The Great Stupa of Sanchi (also called Stupa No.1) was constructed by the orders of Emperor Ashoka around 3rd Century BC to preserve and spread the great Buddhist philosophy and it is believed that the Great Stupa houses the relics of the Buddha. The simple structure was small and it was damaged around 2nd century BC, it was later repaired and enlarged also, some new elements were introduced to the existing structure. The grand structure sits at the top of a hill, surrounded by smaller stupas, monasteries and temples.

There are four gateways to enter the structure and they are beautifully carved depicting Buddhist symbols, historical and religious scenes. The Northern gateway lies in the front and it is absolutely vivid, you will also find a carved sculpture of Buddha in human form at every gateway entrance.

Coming to the Stupa which consists of a hemispherical dome (anda) on a base with a relic chamber deep within, symbolizing the dome of heaven enclosing the earth. It is surmounted by a squared rail unit (harmika) representing the world mountain, from which rises a mast (yashti), symbolizing the cosmic axis. The mast bears umbrellas (chatras) that represent the various heavens (devlok). The entire structure is enclosed by a low wall (vedika), which meets at the four cardinal points by gateways.

As a kid, while travelling on train from my hometown to Bhopal, when the railway station of Sanchi neared, I always tried and looked for Sanchi Stupa and sometimes I even convinced myself that I saw it even in the dusk. After living in Bhopal for many years, I never visited the Stupas of Sanchi and finally after a long wait on a hot and humid afternoon, I got a chance to visit and explore the site and I was ecstatic just to be there, it reminded me of the stories of Emperor Ashoka and some history lessons. The place literally holds a mixture of history and sacredness.

Fill yourself in awe of the beautiful and intricate gateways of Sanchi Stupa.

Visit the Museum of Sanchi.

Nearest airport is Raja Bhoj Airport in Bhopal, located at a distance of about 60 kms.

Nearest railway station is Sanchi itself and it will take only 5-10 minutes to reach the site.

PS - If you are driving from Bhopal, you will also find an interesting geographical point, The Tropic of Cancer, the imaginary line passes from here. Just keep an eye on both side of the rode, a small stone structure is made with the name engraved on it.