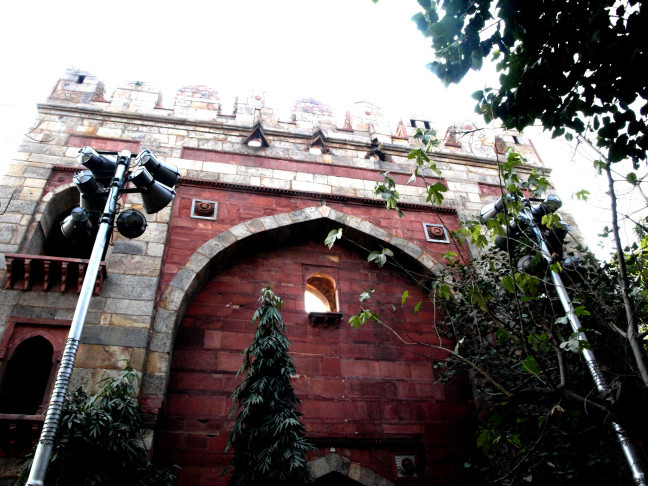 My journey through the Greatest Gates of this country now brings me to the capital - the city with the richest history. Delhi has seen as many as seven cities rise and fall on its soil. With every new city, new styles of art, architecture and culture rose to glory and with every new city new palaces, new buildings, new roads and new gates appeared on the map. One such is Khuni Darwaja.

Though the Mughal Empire has ruled the country for more than two centuries, their reign was not continuous. The break, in-fact, came in the early stages of the rule. While the tactics and aggression of Babur helped him easily conquer most of the country's land, his son, Humayun's immaturity in wars has led him to lose a lot of ground. Only after a decade of Babur's death, in 1540, A brave Pashtun dethroned Humayun to capture the capital of the empire - Delhi. Sher-Shah was the most prolific ruler of the country and most of his policies were carried on by Akbar, which made him undoubtedly the most loved ruler. Sher Shah ruled for only five years but his amazing administrative policies has left a deep mark on the history of the country - some of these are still in use.

Humayun started building a new city, Dinpanha, on the ancient ruins - most probably the ruins of the great city of Indraprastha mentioned in The Mahabharata, on the banks of Yamuna. When Sher Shah conquered the city, he continued the work and established a beautiful and lively city there and named it Shergarh. During the same time, he also built the infamous Khuni Darwaja.

The word 'Khuni' means bloody but it is very unlikely that the gate was named like that from the beginning. It was initially known as Laal Darwaja or Kabuli Darwaja. It could have been a part of a boundary wall on the North of Shergarh. It is likely that Sher Shah built - or at least started to build - a protection wall on the North of his capital because both Humayun and his brothers, the biggest threats to Sher Shah, were residing at Kabul and Persia (Afghanistan & Iran) which lied in North. At present, except the Gateway, no trace of a wall can be found which made the historians believe that it was a free-standing gateway on the road that leads to Kabul - this justifies its name. That, however, does not rule out the presence of a wall completely. Because when Shahjahan built the new city, Shahjahanabad, he could have completely dismantled the walls and used its bricks.

The gate is a 15.5 meters high structure, built with quartzite stone and clad with red sandstone on the front. Quartzite is locally available in Delhi. There are three staircases which lead to the upper levels of the gate. these upper levels were used by the security men for keeping an eye on passersby as well as an attack. The front side of the gate has a very nice red sandstone cladding - which has been an integral component of Mughal architecture over the years. The pointed arches of the gate are nicely framed with quartzite. On either side of the main gateway, three levels of windows are created with nicely bracketed sills. Its simplicity proves that it was not a very significant gateway and was only used for security. The Gate came in fame at the declining point of the Mughal Empire.

In 1857, at the peak of the First War of Independence of India, Major William Hudson, obtained the ruling Mughal Emperor, Bahadur Shah Jafar. This happened on September 22. On 23rd he asked three princes, Mirza Bahadur, Mirza Khizr Sultan and Mirza Abu Bakht, for unconditional surrender at Humayun's Tomb. After arresting the princes along with several others from the royal family he was heading towards the fort. On reaching this gate he suddenly encountered thousands of locals who tried to stop the horse driven carriage. Frightened by them, Hudson took out the three princes and cut down their throats with his service sword. In another saying, he forced them to kneel down and shot from a point-blank range. Whatever be the truth, the Laal Darwaja had enough blood on its walls to be named Khuni Darwaja from then.

This incident made the gate so infamous that a lot of legends started building around it. Many tragic incidents, which were actually associated with the Kabul Gate of Old Delhi were linked with this gate. The only other bloody incident that took place in this area happened almost a century later. When the Muslim refugees wanting to leave for Pakistan after the partition of India were heading towards Purana Qila, where a camp had been set. They were killed in front of the Khuni Darwaja by Hindus.

The Gate had been a place of interest for many History & Architecture enthusiast but a rape incident in 2002 has forced Archaeological Survey of India to close it for visitors. Now it can be viewed and photographed from outside but the inner space and the stairs are closed. You may also hear incidents of ghosts but these are pure rumours. Once a place becomes infamous, many stories start to build upon it.

Best time to Visit: The gate is always open and used.

How to reach: It is located on the median of Bahadur Shah Jafar Marg opposite the ruins of Feroz Shah Kotla. Delhi Gate Metro Station on the Violet Line is only about 400 Mtrs from here. Or Else, any bus which goes to Ambedkar Stadium or Feroz Shah Kotla Stadium passes near the gate. Autos can also be a good option.