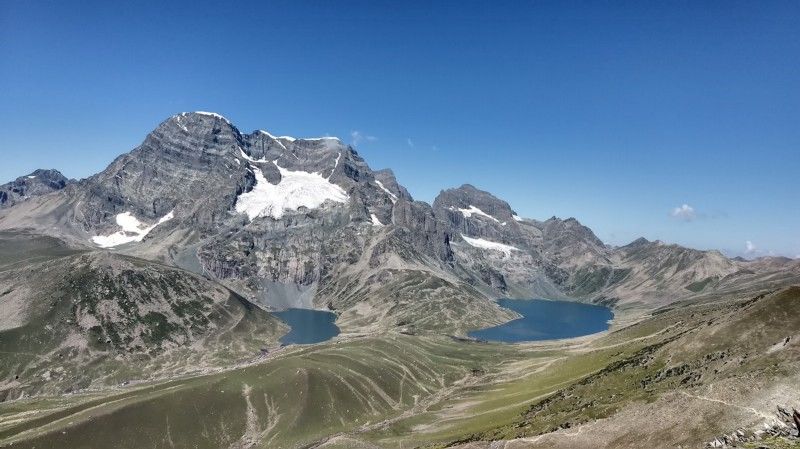 Had I missed this, I would have known what regret truly is.

It was April when my sister first asked me to join her in this trek.I was all hesitant.I had a few exams to worry about and I wasn't actually ready to tire myself just months before one.But she somehow managed to convince me saying I always would have an option of cancelling the trip.I agreed.[The best decision of my life]

Trek Preps : We were asked to run 5 km in 30 min twice,but time actually wasn't a constraint.I got my trekking shoes from Decathlon and happily ran the first 5 km in 45 min.But then owing to a hectic schedule,I had to literally struggle to find some time to complete the other 5km and ended up walking indoors-from dining area to the main room.Sounds stupid enough,right? :P

12Aug : Spent 5 hours at the Hyderabad airport to board a 5am connecting flight to Srinagar.Hyd-&gt;Delhi-&gt;Srinagar.As soon as we landed at the Srinagar airport,we met a few more people from different places-Mumbai,Malaysia and Bangalore.Uber cool people!Talking to them made me realize that there’s so much more to explore!

We had opted for the IndiaHikes transport and boarded the mini bus arranged by them.The beautiful cone roofed houses on the way,the silent lanes of Srinagar,the cedar trees on the way and melodious old Bollywood songs in the bus! Perfect! In 2 hours we reached Sonamarg.Breathtaking view from the campsite,majestic mountains all around and a stream flowing nearby.No wonder we felt as if we were in heaven.But this was just the begining.No efforts->Beautiful outcome.Efforts->;Heart eyes!

We were served soup as a welcome drink.Transition from 36 deg to 22deg seemed a little easier after having it.Soon we were told about the Green Trails initiative by Indiahikes and about the new version of toilets that we were supposed to get accustomed to for the next 8 days.A pit in the rich fertile soil of the Himalayas!Sounds gross initially but then you think about the Darwin’s Adaptation theory and nod to your own self.We were served dinner at around 7:30 and by 8:30 we were all into our sleeping bags.Peeping out from the sleeping bags to get fresh oxygen every once in a while seemed to be the biggest hurdle there.In the tents we(I,sister and Rupa from Kolkata) talked a bit about ourselves and we’ve no idea when we fell asleep.The only next voice we remember hearing is ‘Good Morning,Good Morning! Wake Up,Wake Up’.That was the trek leader Sushant’s way of making sure that we were out of out sleeping bags by 5:30 am.And believe me,procrastination doesn’t work there,else,you’d soon start hearing repetitive bangs on your tent.For a girl who’s probably holding a record for raising the most number of requests to increase the AC temperature at the office,brushing the teeth at 5:30 am at single digit temperatures with the ice cold water was something that required great amount of courage!But then,tick!

At 6 am we started walking towards Nichnai.The first day is considered to be one of the toughest mainly because people are not much accustomed to the climbing and the trek poles and the weather.For us,the ponchos and the rain pants were an extra thing.It was raining that day.The trek lead and the local guide weren't very happy with the weather conditions,but since we had an option of returning to the base camp at Sonamarg if weather conditions forced us to evacuate anytime,they decided that the trek team be taken ahead to the next campsite at Nichnai.On the way we came across a dhaba-Table Top where we had steaming hot maggi and omelette and tea.For a tea lover,I bet that this is the best place to have one!

At around 2pm,we reached the next campsite- Nichnai. Rested for a while,explored a bit of surroundings,had tea at 4pm,interacted with the fellow trekkers,had soup at 6pm,dinner at 7:30 and by 9,we’re all dreaming again!The weather conditions were still the same and we were informed that if it remains the same even the next morning,then probably we’ll have to return.The path ahead was a bit muddy and rains were a complete no-no!The Malaysians did a silent prayer that night post dinner and viola, the sky had cleared the next day!

At 7am the next day again,we headed to go to the next campsite Vishansar.This was supposed to be the first lake that we’d cover among the seven included in the trek itinerary.We were hell excited.But little did we know that how our bodies would disappoint us.Many of us had problems midway-starting from headaches to nausea.There were thoughts,at least in my mind,of returning back.Constant reminders of all the comfort that I had left behind and the self-curse for having chosen this pain!But on the way,I saw another foreign trek group with a man whose lower body was completely paralyzed but yet was determined to trek with his crutches and that too,faster than us!My brain yelled at me that if this man can then I’m nobody to complain!That’s how I finished my second day.Lot of trouble on the way but the way the mountains greet and welcome you make you forget all of it!

The third day,we headed at again the same time to Gadsar.On the way we saw the second lake-Kishansar.A bit smaller than Vishansar but appears as beautiful as it’s twin from the Gadsar pass.Clear blue water and the reflection of the glacier covered mountain in it is simply spectacular!This way,via the Gadsar pass, is said to be the most difficult with the most ascend with approximately 14.5 km of walk for the day.By the end of the day,I knew that the trek prep is not worth underestimating.Lesson learnt!

The fourth day,we headed towards the Satsar lake.It was an easy day with just 8km of trek and a 2 hour ascend.We reached the campsite at around 1pm and had a lot of time to explore the surroundings.There were beautiful streams of water just a kilometer away from the campsite and everybody branched according to their own interests.That’s how we found out more about each other.I silently sat down of one of the rocks in the middle of the stream with a pleasant music and a book for almost 2 hours.Life seemed beautiful!We were also lucky enough to have a clear sky and see the 9th highest peak of the world-The Nanga Parbat.I wonder who named it so because it always happens to be covered by snow and ironically surrounded by naked mountains!

The local guide told us some silly haunting stories about the place.At night,the sky was clear and we were able to see non-static satellites,lining of the milky way galaxy,shooting stars and the various constellations.Never had I awed the night sky so much before!We had a beautiful photo session — thanks to the oh-so-awesome cameras that the Malaysians were carrying — that night with the galaxy and stars behind.

The next day,we headed to what is the highlight of this trek-Lake Gangabal and Nandakul with Gangabal being the biggest lake covered as a part of this trek.The views on the way(Zaj Pass) from Satsar to Gangabal were just incredible!The lake Gangabal is considered to be a holy lake for the localites and we could find the diyas as souvenirs of the trip.It’s a huge lake and covering the circumference requires a lot of efforts after the 6 days of trekking.

The next day was a buffer day.By then we had already started feeling nostalgic about the trip and we spent the entire day roaming around the beautiful lakes in the serene environemnt.In the evening,we had a birthday celebration and the efforts put up by the cooking team were just applaudable.The ingredients to the cake are yet unknown to us,but having one at an altitude of 11,000 ft is an experience in itself.That was followed by the folk performances by the horsemen,the kitchen staff and the local guide.All merry moments!None of us wanted to sleep that night for we wanted to delay the end as much as we could have.But then the trek leader shocked us all saying that the next day would begin early with 5 am departure.So we all headed to sleep at the same old time of primitiveness-8:30 pm.

The last day,we were told that our knees would curse us for the next whole week owing to what is going to happen to them after the very very steep descend.And believe me,it was not at all easy.We tried taking the shortcuts as many as we could,but to no avail.On my way,I met a mowgli boy.His descend skills would put anybody to shame.How easily he managed to get down the hill!He would keep meeting us on our way as if imitating us.After 6 long hours,we managed to go back to civilization.Sitting on the chair felt like being a princess.Lays packet was the new king’s-meal and appy fizz,the old monk! We all collected out t shirts from Naranag and our buses were waiting to deport us to Srinagar.We reached Srinagar at around 3:30–4:00 pm and hugged each other and made promises of staying in touch.

The trip changed me in ways unimaginable.It taught me how to deal with frustration,anger,pain and taught me the essence of joy and happiness one gets from immaterial things!

I look forward to many more treks ahead!