The Last Performers of an Epic - the Bhopa's of Rajasthan 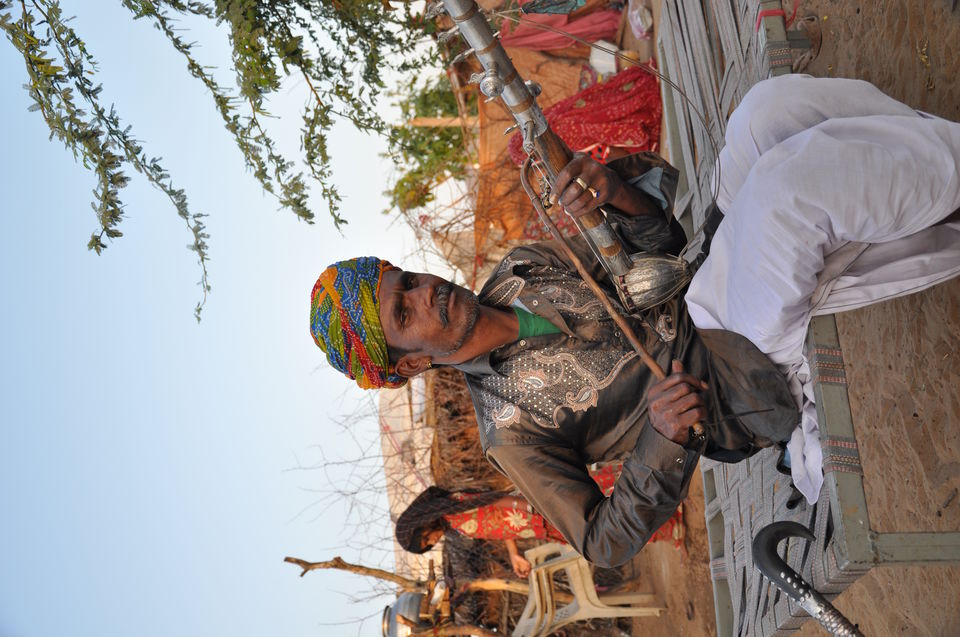 While I was wandering the chaotic streets of Pushkar, in the desert state of Rajasthan, the sight of the annual camel festival, looking for subjects to photograph, the mid-afternoon sun was causing my head to stir. Irritably my clothes clung on to me due to incessant sweat. Adding to the discomfort were the choked streets full of garbage. Dozens of cows wandered looking for a snack. Persistent pavement beggars added to the irritation while motorbikes whizzed by almost blearing a loud horn.

The melee on the streets of Pushkar was expected, it was a town that attracted several foreign tourists and also Hindu pilgrims. Amidst the bedlam arose an alluring music that drew me in. I looked around for the source of this harmony. In one of the tea-stalls along the street by a dusty patch, Pappuji was performing a classical folk song on the Ravanhatta, a local musical instrument loosely resembling a violin made popular in the Hindu epic Ramayan. I greeted him with an invigorating smile and asked where he had learned to play the instrument.

To my absolute astonishment, Pappuji revealed that he was a village bard but more intriguingly, although illiterate, he was one of the few remaining singers of a great Rajasthani medieval poem the Epic of Pabuji Maharaj. The 600-year poem is a fabulous tale of heroism, struggle and martyrdom of Pabuji who many of the nomadic goat and camel herders of Rajasthan consider their God. According to the legend, while in the Ramayan Lord Ram went to Sri-Lanka to rescue his wife Sita from the demon Ravan, but in the epic, it was Pabuji who travelled to Sri Lanka and stole a herd of camel from Ravan bringing the ship of the desert to the Thar desert of Rajasthan.

The performance of this ancestral poem was now a rare sight. When this 4000-line poem is recited from beginning to end (which rarely happens these days) it takes a full five nights of eight hour dusk till dawn performances from poets such as Pappuji who sing, dance and recite the poem to worshippers of Pabuji. The poem is performed in front of a phad, a long narrative painting on a cloth which illustrates the many epics in the life of Pabuji.

SPONSORED
Want to book a similar trip?
I accept the Terms of Use and Privacy Policy of Tripoto.
SPONSORED
Tagged:
#Culture & Arts#Road Trip#city travels#history & architecture#festivals & events