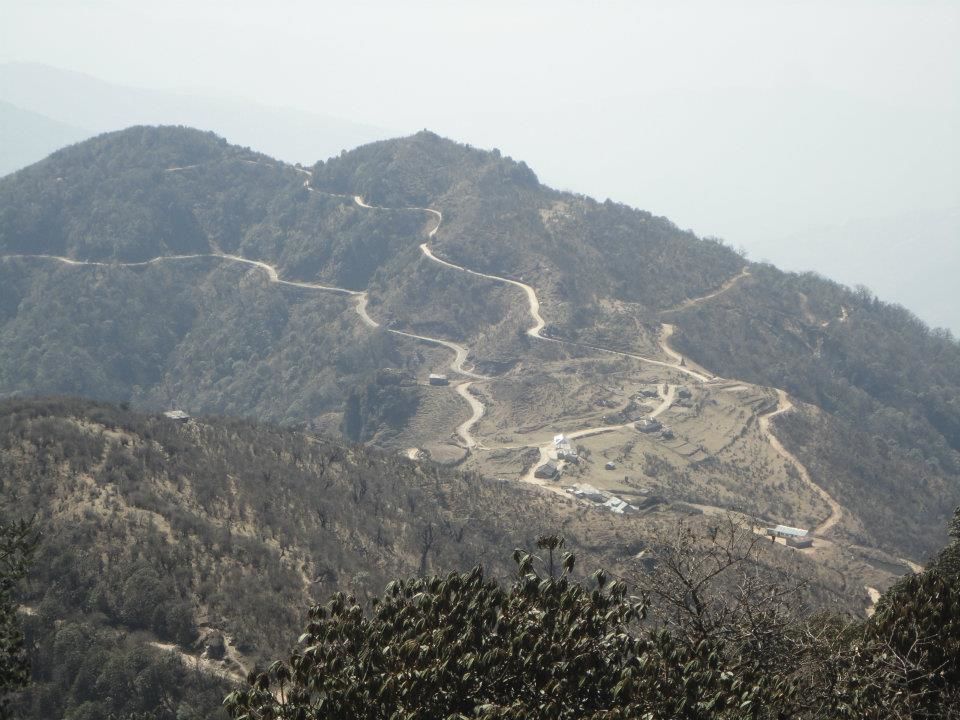 Kaalpokhri is more like a transit camp. With limited facilities. Trekkers usually stop by this place for their food. The rooms and the bathrooms were basic. Nothing much to say and it was expected.
Dipanjali was the first one to get out of the bed. She took out her toothbrush and paste and then gave out an “Oh NO” cry. I asked what could be bugging her so early in the morning. She showed me the toothpaste and said, “The damn thing is frozen!!!” She gave it to me and I tucked the tube between my pillow & quilt for a while! Overcoming our first obstacle, she went out to brush her teeth.
You will get a better idea when I tell you this. Kaalpokhri does not have attached bathrooms. There is no electricity too. But you get hot water any given time of the day. They have mechanized a system by which the iron water pipe runs through the fire wood “chulha” (stove) and this helps in keeping the water warm. The tap is outside.
I saw Dipanjali; as I looked outside the window, walking back to the room, her toothbrush still in her hands. As she entered I asked, “What’s the matter?”
“Ice, ice baby”! She said while trying to match her words with a dance! Icicles formed in the tap. We woke up way too early. The kitchen was closed and the stoves were yet to be lit!
I got out of the bed immediately, took my camera and rushed towards the tap. I wanted a picture of it badly and I hated it when I saw Tshering smashing the icicle! I gave out a “No, stop it, will you?” cry, but the damage had already been done!
Exactly at 8.30 a.m we were all set to make it to our summit. Sandakphu, which was 6 kms and at an altitude of 13000 feet. So you can imagine how steep the climb would be.
From the place where we stayed, Sandakphu was clearly visible. I just looked up at the mountain; saw the roof of one of the lodges… that was our landmark. I mean there were the clear blue skies just above it. Only that. Nothing else.
And we began our trek. Walked and walked. Rested at every curve, got hold of our breathing and walked further up. The curves were very steep. Every curve we took we knew we were inching closer to our summit and that came as the biggest motivating factor.
The six kms seemed an endless sojourn. Bikeybhanjan was our pit stop. We rested for a while and then we moved on.
Amar kept telling us over and over again to walk slowly. But Jun and Niru belonged to the impatient category and they did just the opposite. Tarun and Kakoli were in their world of their own and matched their pace with us.
As we took a break, to gulp some water, have some chocolates, we saw a milestone which read “1 km”.
Both Dipanjali and I gave out a cry! As if we had already reached! Amar told us, “Come on girls, we are just a few steps away from Switzerland.”
Switzerland???? What was he talking about? Was oxygen playing things in his brains too?
“Naah, it’s the view girls”, he assured us.
One curve, two curve and three and there we were… we saw “Sandakphu check post”! We reached Sandakphu exactly at 1.00 p.m. Our estimated time, not a minute more, not a minute less.
Yay!!! We made it! We made it! We hugged each other and all the tiredness went off almost immediately. As we looked across the mountains we could not believe we had crossed seven ridges. It was unbelievable. But we did it.
As I looked to my left, I saw the Himalayas, the Sleeping Buddha looked like a jewel. It was worth every step we took. And it was majestic.
Amar and I celebrated our success by opening the pack of fags and taking a drag!
We took up a small log hut. And for our meals we had to walk to the lodge opposite us. The one which I saw from Kaalpokhri. The one that falls in Nepal. So technically we stayed in India and dined in Nepal.
It was cold. The breeze was wicked! The winds roared, like two giants waves crashing on a high tide. You could feel the cold in your bones. Insipte of wearing so much of warm clothes, there was no respite. The rays of the sun were weak. Did not do much to make us warm. Post lunch we walked down to see a temple. No one wanted to walk but Amar the boss instructed and we listened to him.
We were lucky, to have walked slowly, drink a plenty of water throughout our trek and eat chocolates whenever we felt we were drained out.
The girls who reached an hour earlier were not only dizzy, but had their mouth going tasteless and they felt absolutely weak.
It was a weekend and place was full of trekkers, Indians and foreign. As we sat in the dining hall for another round of Tomba and some yak meat, the place looked liked a cozy pub, much similar to Calcutta’s Olypub!
By 9.30 pm, the generators were shut and we were all tucked in our respective beds. Sleep was not easy. There was too much of excitement in our system and both Dipanjali and I did not get a wink of sleep yet one more night…