The Pride Ride to Chillax & Relax- The Rider's Den

The dawn of 23rd July 2016 brought the harbingers of realisation that a cause, a belief makes life worth. This was the day when we were to ride for Chandra Shekhar Azad and for the Kargil Warriors. And this ride, unlike other rides had a different spirit, as if we weren't only riding for ourselves but for something greater than all the reasons in the world.

Gixxer Club Delhi, for no surprise was joined by 17 riders and 4 pillions. The point for the conclave was India Gate where we reached at 6 am. Gixxers stood in a line in the haze of weather and riders in the clarity of purpose. A salute, a candle, and a minute of silence defined everything to us. You can feel the joy of giving yourself away for your nation when you bow in front of the Amar Jawaan Jyoti and watch the names of the heroes written all over the wall.

The awaited moment arrived. It was time for the Flag off. The briefing was to be done and the right person to do it was Nishit. His words and devotion aroused the suppressed patriotism in everyone and he gave a perfect start to this ride. Sammaan instructed about the speed limit and assigned the duties. He was the Scout with Akshay as Co-Scout taking the lead. Wafa Siddiqui and Yaduraj were the Marshals, who played tough enough making way through the busy lanes. The Pro-Cams for the day were Animesh, Nishit and Justin, capturing beautiful shots even in the oddest of situations. And I (Ghaniya), the blogger, is the one reciting all this to the viewers, listeners and readers ;-).

It was 6.30 am when we were getting ready to kick start the journey when a young man with impressive stature approached us on his Harley. He had the Indian Tricolor Flag on the bike. He stopped and took off his helmet when Wafa introduced him to us as Sukant Sir. We were all awestruck by his spirit, his youthful age of 52 and the charm on his face as he shook hands with all of us. I am so sure that many of us, in that very moment were wishing if we could keep up our energy like his when we reach his age.

We started our journey and via Gurugram we were heading to "Chillax and Relax- the rider's den" at Rewari Haryana. We were about to enter Gurugram when at a signal, one of our riders lost control due to some accidental reason and slipped. The injury was little and the picture that I saw still brings a smile to me. 17 gixxers stopped and everyone tapped his shoulder asking if he was hurt. He was smiling and repeating that he was fine. The signal was still at rest when we managed to take him at the roadside. The riders helped each other make way as the signal showed green. What also enchants me is that the degree of concern on everyone's face was equal for the rider who slipped and his bike. Some had it more for his gixxer ;-)

But he was tough and was smiling and there was no major injury to the bike as well so we decided to carry on the journey.

As the path of reason is not always easy, we met with an unexpected traffic jam on the way. It was huge and it took the final freckle of patience out of us. But who says it hinders your way. All the gixxers found way from the middle of the vehicles, sometimes even needing to go off-road and we finally escaped. Yeah!

We reached the destination at around 10.30. For my wonder the owner of the restaurant himself came out to the entrance and gave us a warm welcome. A brief about him is the least we can do. His name is Sarabjeet (Sabby- this is what he loves to be called) and he comes from Jammu. Earning a career and experience in the field of hospitality, he discovered his passion for riding. Taking various rides and earning that marvelous glass shield with encomiums over his bike, he dreamt of opening a restaurant. And what was better than combining both his skills and passion? He created the paradise for bikers on NH-8 where he treats every biker as his own brother. And speaking from personal experience, he is the best host I have ever seen.

This place just feels like home. You can relax and eat and the karaoke thing is just awesome. To the people it was not even necessary to get an invitation to sing, Yaduraj went with his cold throat challenging Atif, and then the super cute performance by Nishit and Pallavi, and it was really hard to hold back the craving so the next moment the stage was taken over by everyone. Indeed "...those were the best days of my life!"

It was 11 when some of our mates took farewell from us after some cool clicks together. We took a little more time to discuss about the next ride and left. During our way back, I looked at the open road, Sukant Sir with the flag on his Harley, everyone else playing their part as Scouts and Marshals, the heat taking us in, but we rode from the dawn to dusk, in spirit and joy. I wondered how beautiful life becomes when one is free. Free to wander, to explore, to ride, to live and I saw the riders around, they had a smile, a contentment on their faces, Azaad must have smiled back at us, thinking what his sacrifices, his ideologies and his name mean to our lives. We were living the dream he dreamt once and both of us were happier today. 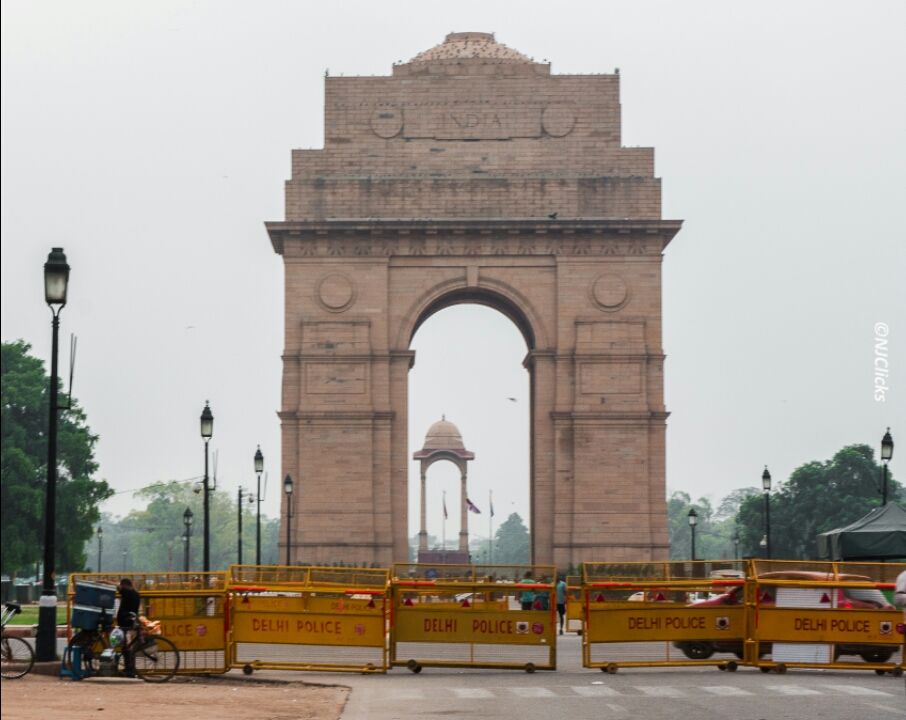 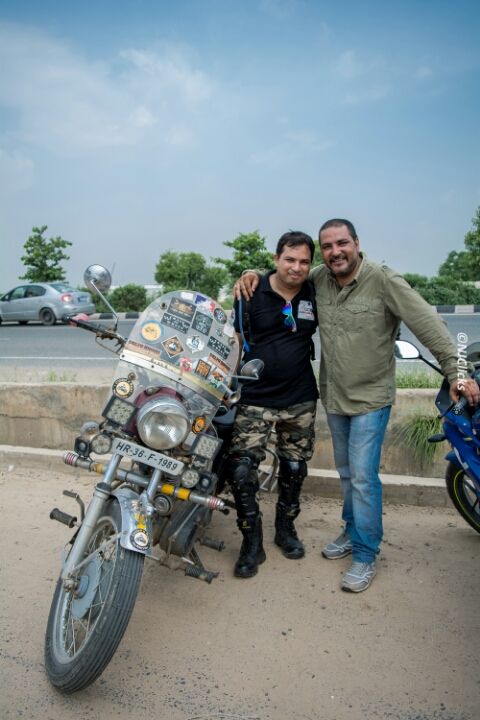 Reaching anywhere else was not as enchanting as reaching here!???? 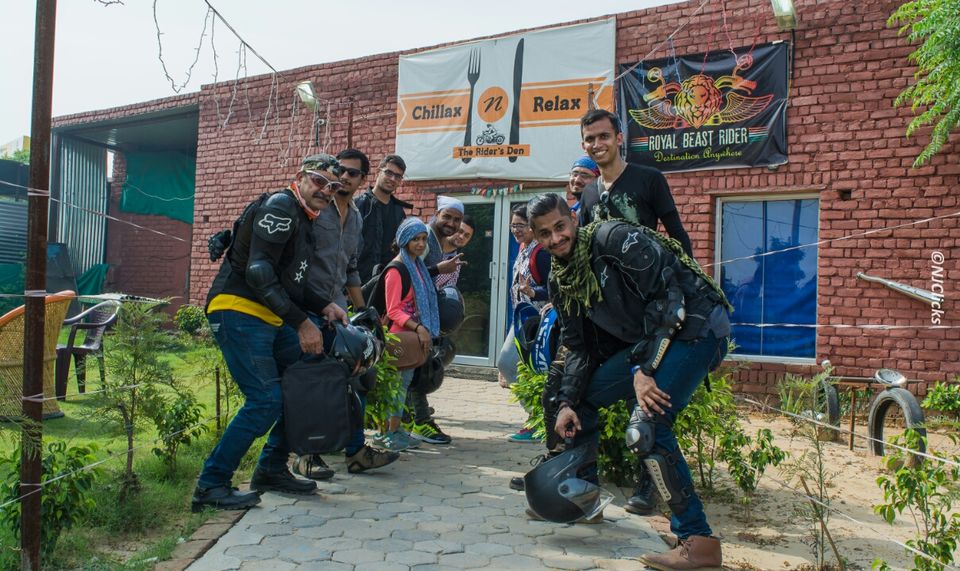 Discipline defined on the road! 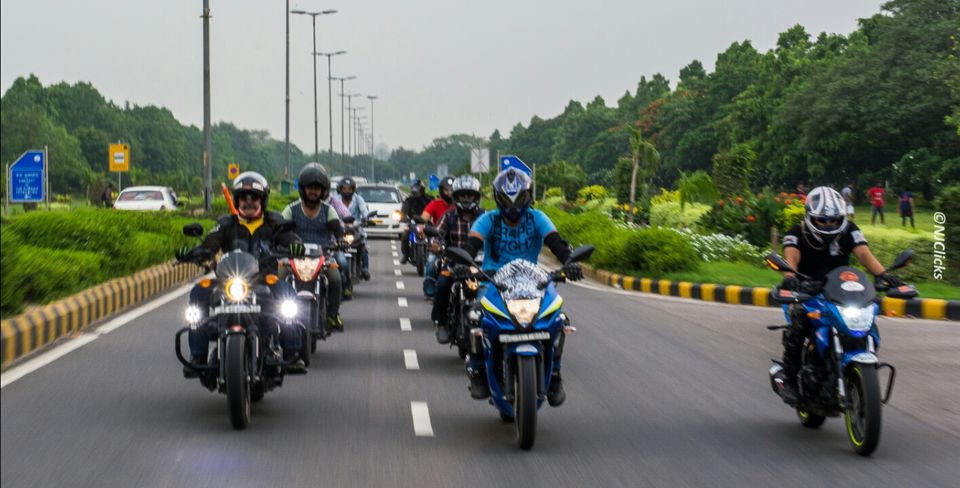 Its all about the curves???? 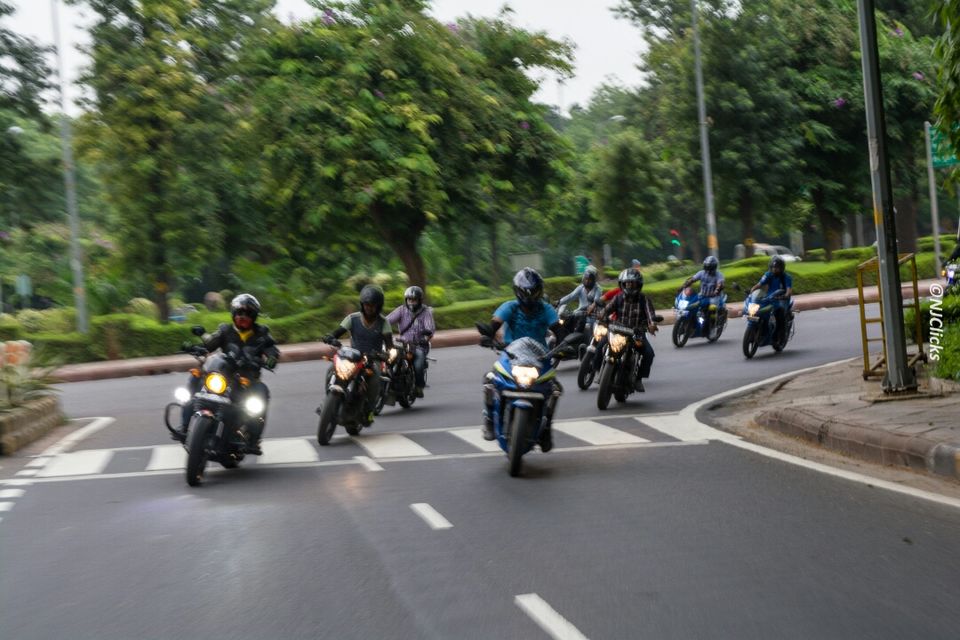 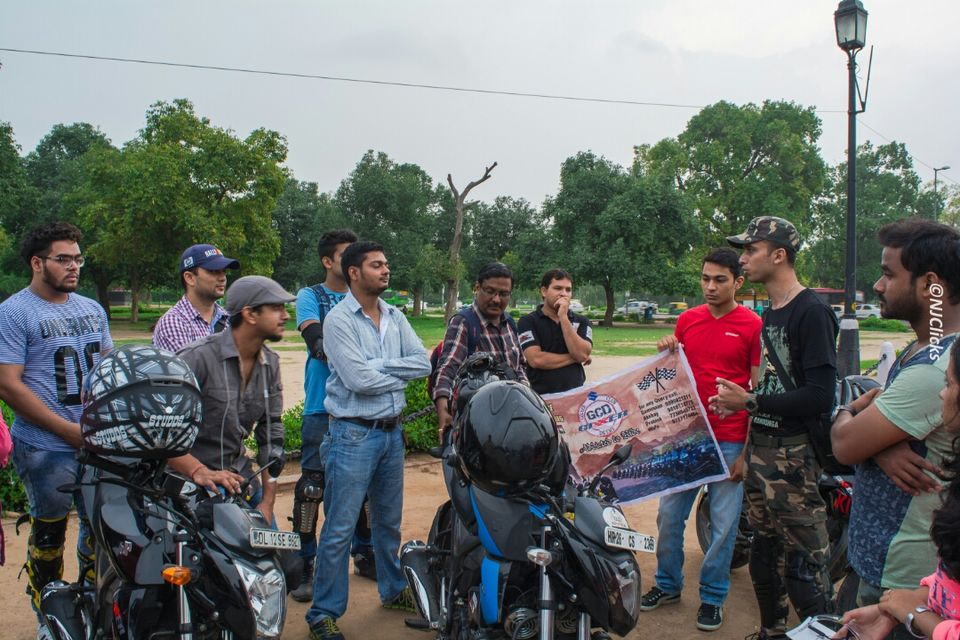 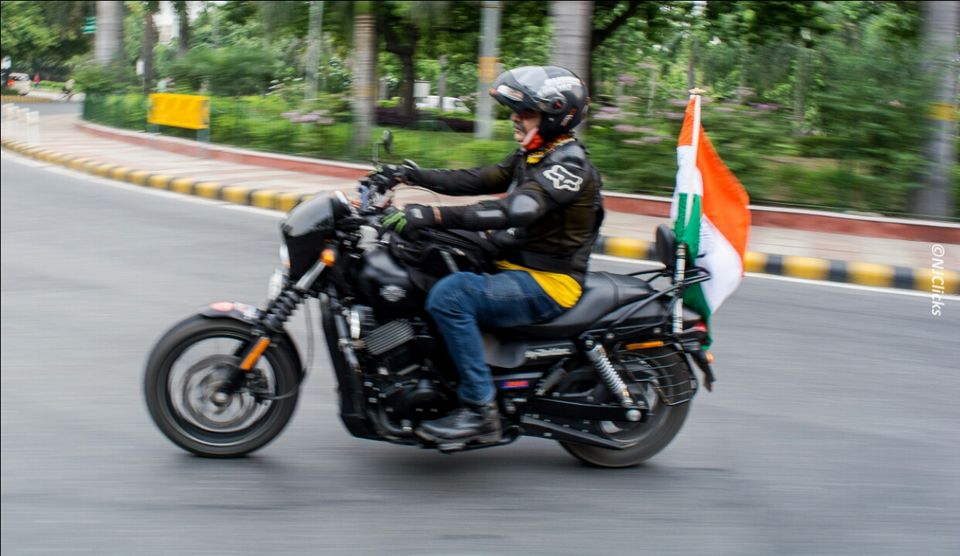 Waiting for the Scout to signal- "Dracarys" 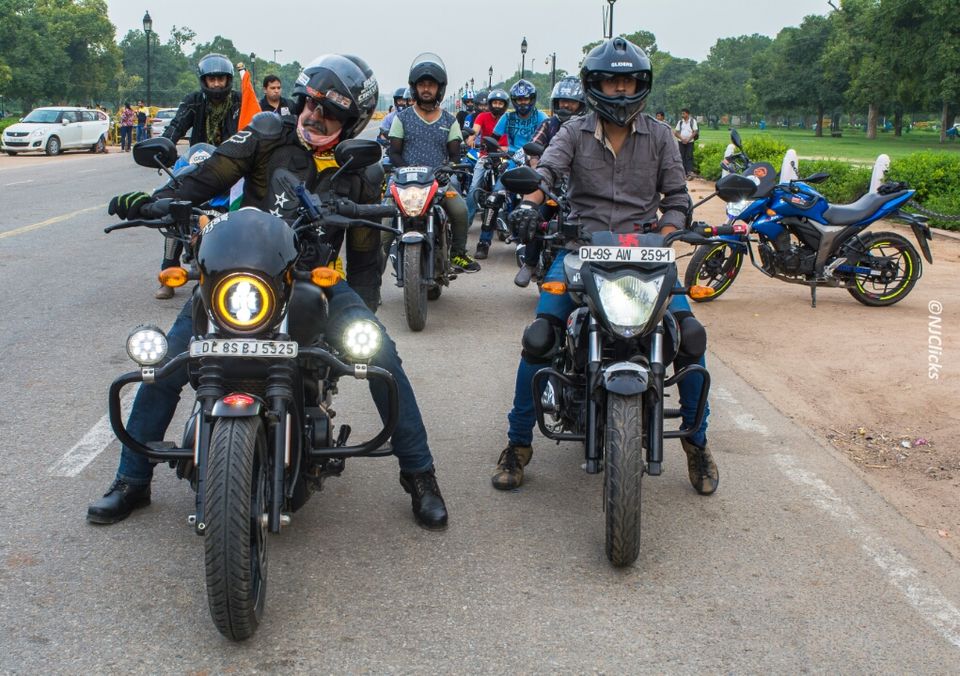 Reason for the Pride and Ride! 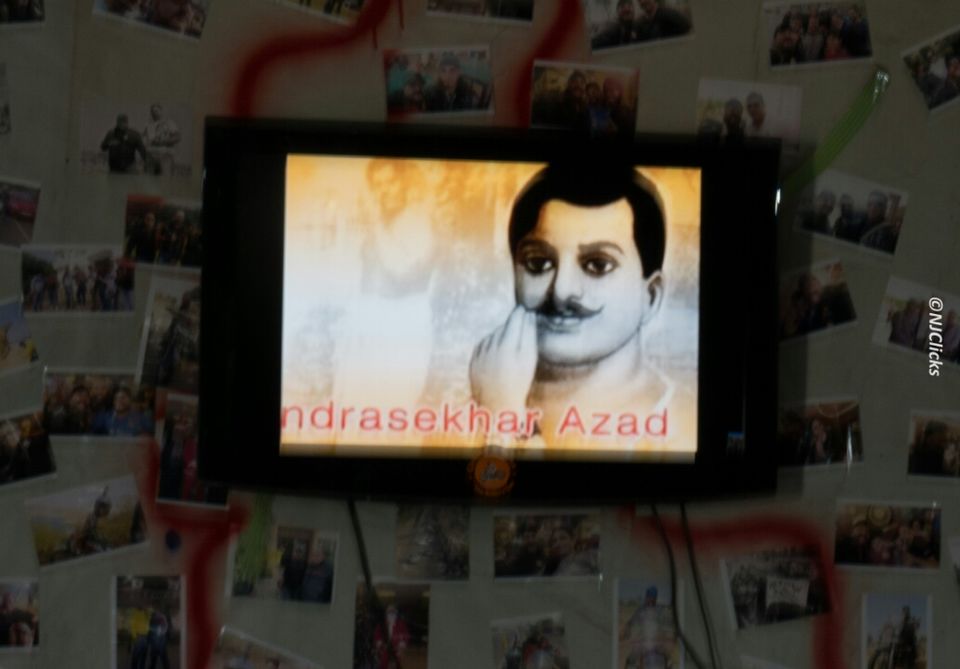