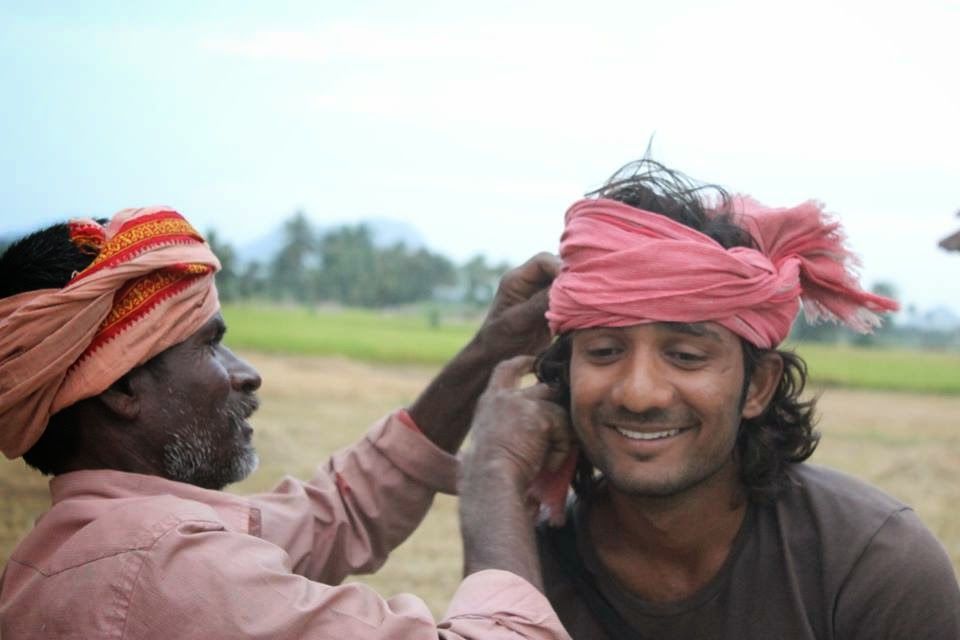 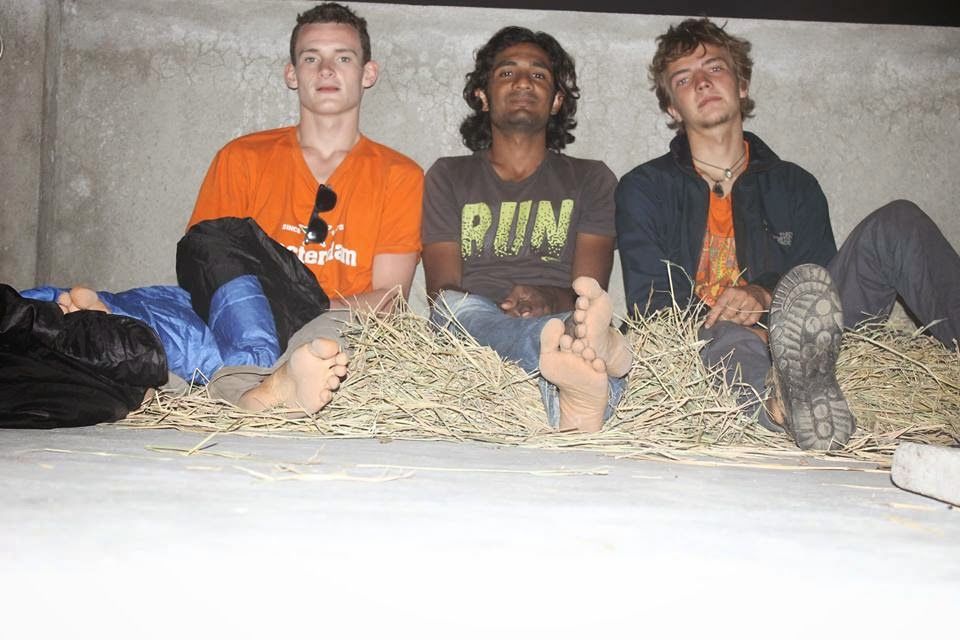 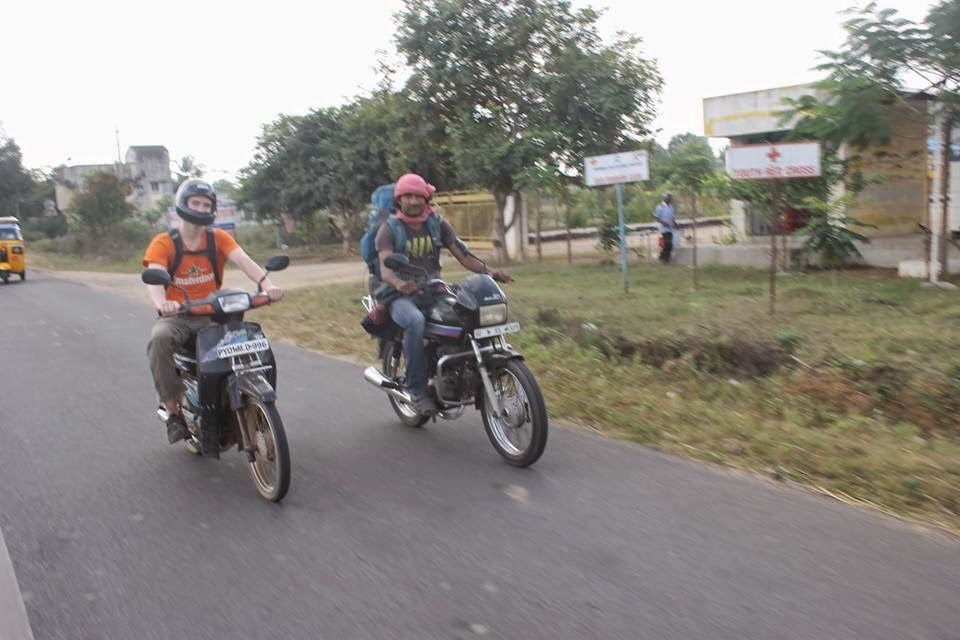 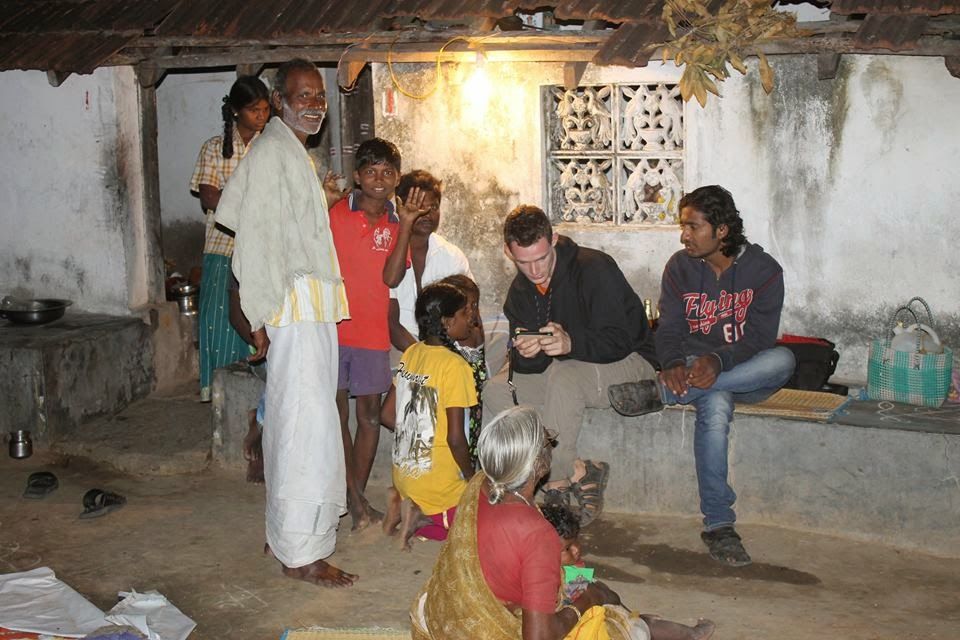 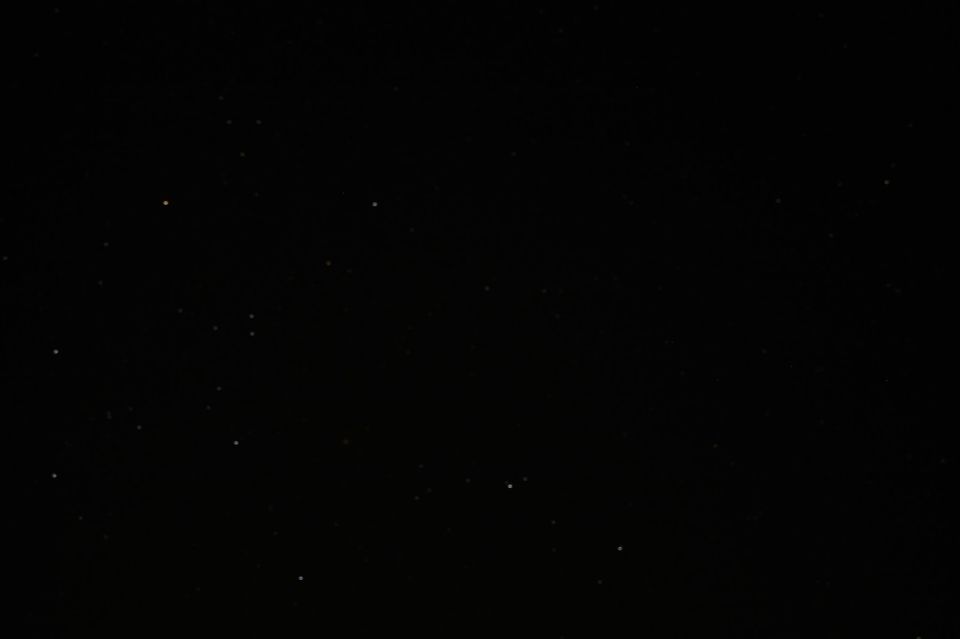 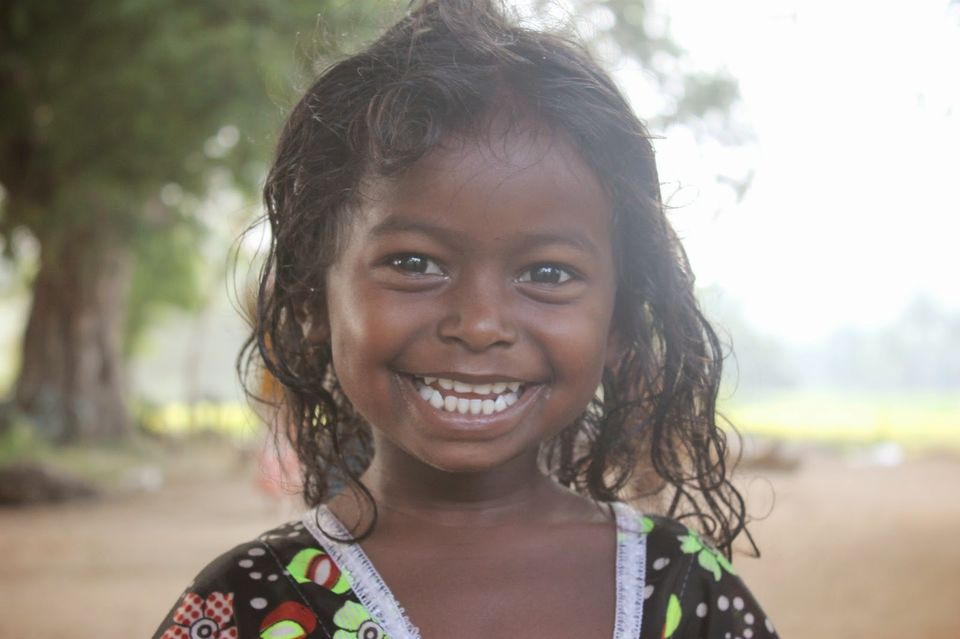 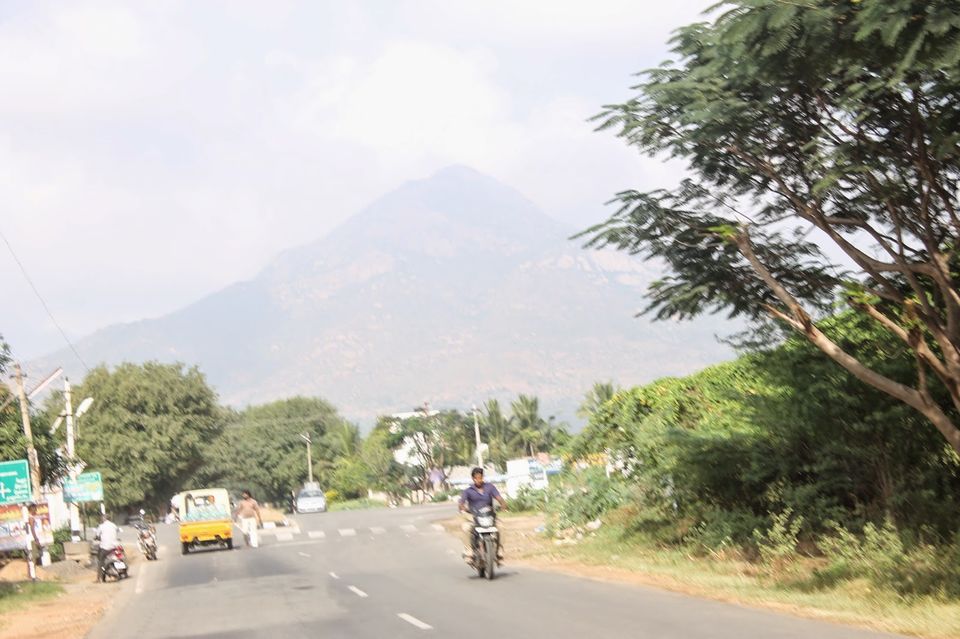 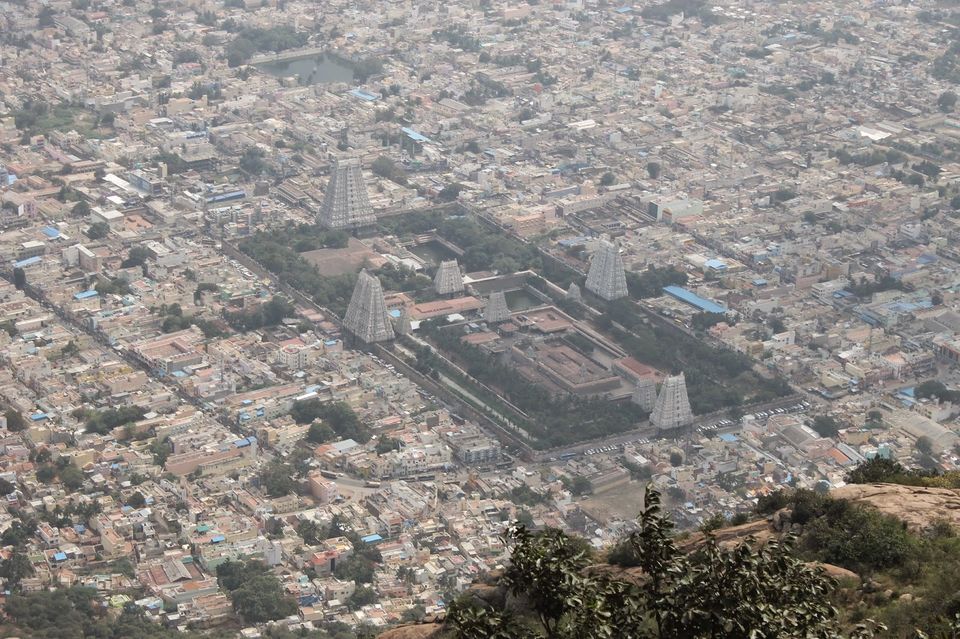 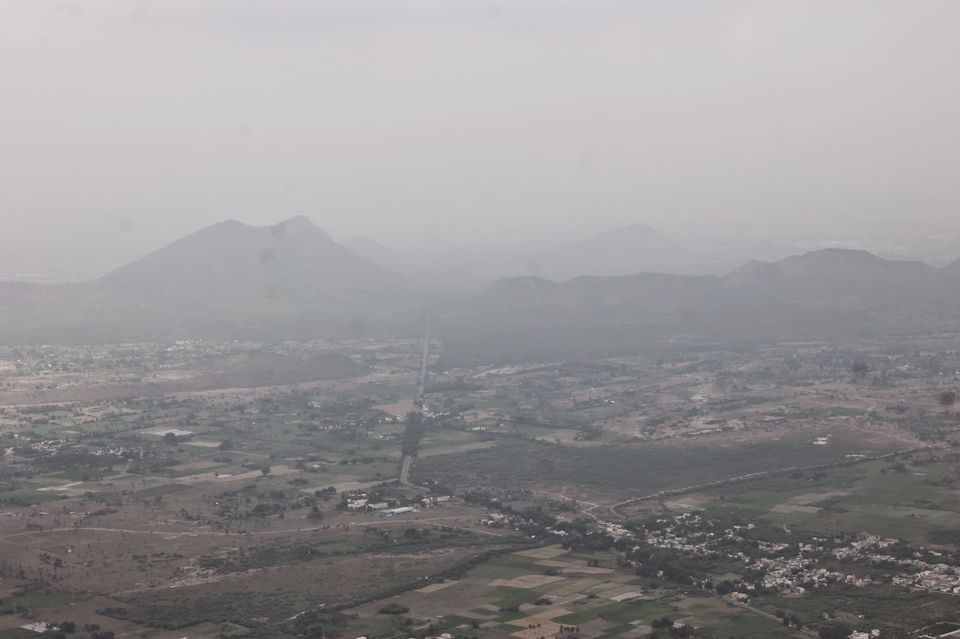 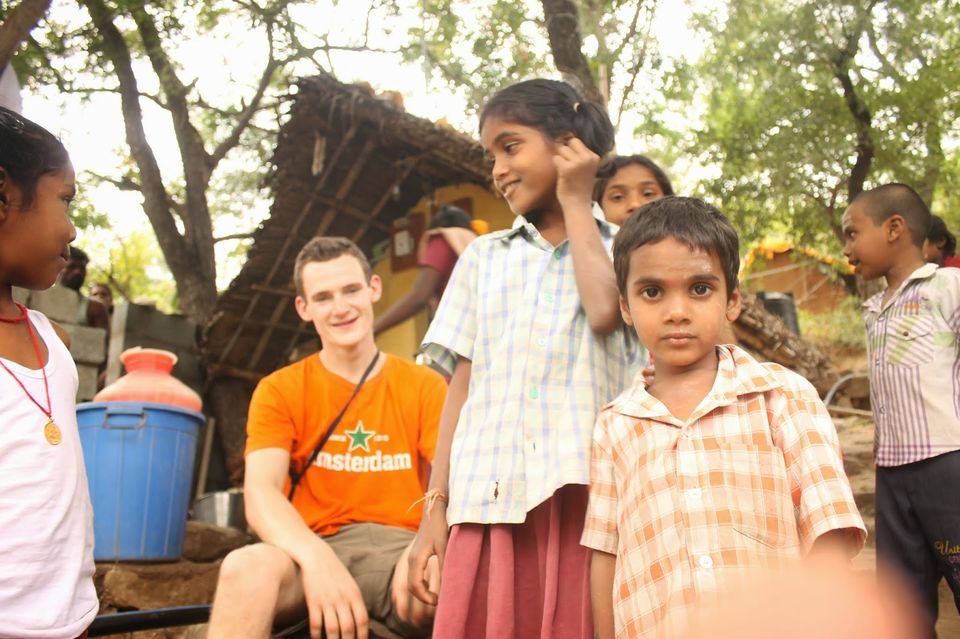 It was a magnificent morning and I was chatting with friends while having a boring breakfast. I didn't like breakfast in that place, because it just consisted of porridge, and fruits and I hated blend porridge. Suddenly it started raining so we rushed to our hut to check our stuff. I was one of few lucky ones whose stuff was unaffected from water and there were few unfortunate friends whose stuff was all wet. I didn't know what to feel honestly: happy for myself or sad for them?? All of sudden Josh came to me and asked if I would like to go with them to the holy mountain. I agreed within one millionth second. And we packed big bag consisting of sleeping bags, bananas, oil canister and tools and few other things. At the moment rain stopped, our 'fleet' left the venue for our adventure. we started driving down the road. When we came to the junction of a big highway and the street we drove till now, I could see a feeling of terror of the Indian drivers on their faces.

Jon was a flexible and adventurous Brit, who absolutely was seeking a memory for life time from Visit to India. Not to mention he had a British accent so strong that I couldn't understand him time to time and all I could do is nod in approval. Josh was a man as deep and calm as the ocean which had tremendous activity and energy inside which is generally hidden and covered by his silence but given away by his eyes. And he of course embodied a German persona of perfectionism. Anyway these were my wing-men or I was theirs, that didn't actually matter much but the fact that we hit the road. Our destination was somewhere nearby the holy mountain in town of "Tiruvanamalai". I was excited by idea of rocks, slopes and climb more than anything. But riding with a group set my mind free. It smelt like total freedom from any virtual, social or emotional ties. I lost the connection with every tie, I held dear which actually tethered me, and for a moment and it connected me with myself more. By the time we drove 50 kilometers I lost the ability to distinguish myself from the environment of road, bike, mountains and breeze combined. Suddenly hunger disturbed my daydream and we decided to stop for lunch.

And here we had our first of series of perception-changing experiences.

It wasn't usual in state of Tamilnadu that people spoke good hindi. But luckily in the restaurant we stopped we found one extremely friendly and hospitable local man. We sat on the table and he made sure that we had the taste of everything available in that shop. Everybody was starring at Josh and Jon and I found it was disturbing them, but anyway we focused on food. And as always Jon the "spice-salt" guy, enjoyed savory food and Josh seemed to enjoy sweets beyond my limit of comprehension. We loved the attitude of people, who served us food and treated us like kings, although we felt deep down that we might not have deserved it. But honestly I was enjoying the experience imprudently. After a while we were done with the food, but Josh didn't seem to be done with sweets. Sweet!

We started our engines and their roars mixed with the voice of the city and we continued further on. And it felt as if lives of our engines became part of that alive city. A life which is consisted of non-living. That road had a strange mixture of countryside, wild and human settlements at points. At a moment we were driving through thick towns and at another we were driving through farms, trees and with big rocky hills in the background. We stopped for Petrol. I asked Josh and Jon how we are gonna manage the stay for night. Jon Gestured at Josh and We found Josh trying to find roads from Google-maps. Well we were doing better navigation by asking people and maybe roads found by Josh, but Jon and I thought it was still better an alternative to ask locals about places. I remarked again, "Hey Josh, How are we gonna manage to sleep tonight?" Josh replied something in half eaten words and impossible to understand, and he was still busy with maps on his phone. Jon and I looked at each other, shrugged our shoulders, raised brows as if we were exclaiming to each other, non-verbally-: "Germans"!!!! Finally we had his attention and he mentioned to take hotels, and I suggested that we should rather go to villages and talk to locals and find a refuge with them in their houses or sleep on mountain or in open. And I could see in Jon's eyes that how much he wanted that. Josh said he wouldn't mind trying since I, an Indian guy, am with them.

We kept riding till we found one rocky hill that appealed us. we tracked it down and found a small undone-road to get there. and,
One more surprise!!!!
We ran out of road and the hill still lied a kilometer away with thick farms between it and us. It was as if it was telling us, "not yet children". It was already 6 by the time we reached there and it was soon gonna be dark. So we decided to think upon our options. Once more luckily we found one old man village who spoke English and Hindi wonderfully. Well he found us rather, honestly. He told us that he served in Indian army. Soon I took the opportunity of moment and asked him slowly if we could find refuge in any house in that village, and soon one by one we were offered to stay by 4 households. Sweet! We decided to sleep on terrace of one 2 story building which was owned by one old lady, who was really sweet person. We roamed around in the village for awhile and met few more people, where an old man so happy upon seeing us taught me how to make his turban. Sweet!!! Soon we went out in small market of the village to get some booze. where Jon and Josh were objects of attention and potential pocket for free-loading boozers. Finally we made it to the terrace and set our camp up. Jon and I decided to go down to have some chit-chat with them and Josh followed. We ended up talking everything imaginable, with the villagers and Jon showed them tons of photos from back home. Our hosts were one big amazing family.

We decided to have our drinks and go to bed. Josh quickly crashed, as we reached top, on his king size hay bed. Jon and I sat for a while and had our drinks and talked some non-sense which I wound not talk with even myself when I would be sober. Funny to see how people act different when they are drunk. Jon was so tired that he could barely talk what I would understand and he finally decided to crash. Sad that I lost another wing-man to the kingdom of slumber. I was still wide awake. I looked up at the sky and attempted to fathom the treasure laid in front of me. I tried to take it in, what I was seeing in the cloudless sky. I felt drawn towards stars and just thought how would it feel to be so close to them.
"It will burn me??" I asked me.
"Perhaps it is just like those influential people who are so bright from the distance that their stories of their legendary deeds seduce you, but it will burn or strangle you if you dare to go near."Cometh the voice within. Voice so deep inside I didn't know was there. My ear drums were playing my favorite songs. I felt mild dose of adrenaline and ocean of the celestial beauty against my eyes and those feelings eventuated in diamonds rolling across my cheeks. I took some photographs of night sky. And finally urge to pee got me out of the other world. I didn't wanna go downstairs and disturb our hosts and didn't wanna pee from the ledge of the terrace either, so I relieved myself using those empty beer bottles. and ended up using almost all of them. And I eventually gave it up to the slumberland.

Next morning when we woke I was told the fact that I was snoring last night. surprising! We quickly busied ourselves in cleaning the terrace. Grandma showed up to see how we were. I suddenly looked at those 3 big bottles, I filled up with little bit of help from Josh and Jon. And so did grandma. The liquid was so dark brown that it could delude anyone into believing that it was beer. Grandma reached them first and picked up and took it close to her nose to smell. I stopped her when her nose and neck of the bottles were couple of inches away. Disaster!!!! I took it from her and produced an embarrassed smile and told her that I would be getting rid of them soon.

"Jon, I think you would like to help me getting rid of them." and I picked up 2 of them swiftly
"Yes man, after you" said Jon and picked the last one followed me downstairs.

I loved his attitude. He was so flexible and agreeable at everything. He would make a nice travel-buddy for a long trip or an understanding partner for something big and serious, I confirmed to myself. After some chores and clean up, we finally prepared ourselves to leave. I fixed a problem with Jon's bike and we showed our gratitude to the family in form of some money. Grandma appreciated. Then I washed my face and myself and set myself on my bike. The elder girl in the family came to say goodbye to us and upon seeing my wet long hair and clean face, she complimented me : You look, beautiful. Nice!!! It felt like being a conquistador.  We had to say goodbye to our lovely hosts, who accommodated and loved infinitely us complete strangers. We started our miserable bikes and we were off.

After a good ride and reaching Thiru, and having a good sweet,savory breakfast, we took on the holy mountain. View rendered us breathless, so did the climb. We reached the summit in notably short time and spent some nice time on the top of summit taking it all in, having panoramic view and with our mouths dry and longing for a drop of water. I felt free and accomplished and it strengthened my love for rocks and mountains ever more. I ended up having a nice philosophical conversation with Josh and felt bad about Jon not taking part in it. Finally we went down and recovered our luggage from the house where we left it. here Jon specially enjoyed getting photos with kids and talking with them. We were exhausted, hungry yet happy unaware of what awaited us when we would reach our bikes. For safety purpose I locked Josh's bike and now the lock wouldn't open. After half an hour of try and frustration we had a mechanic by our side who helped in time of need but ripped us.

And we were on our way back with contentment and memories with us. I could read it in Jon's eyes and smile and Silence from Josh but his head tilt with minor hardly detectable grin would say it all.