Things You Can Do In Nubra Valley !

Things you can do in Nubra Valley ! 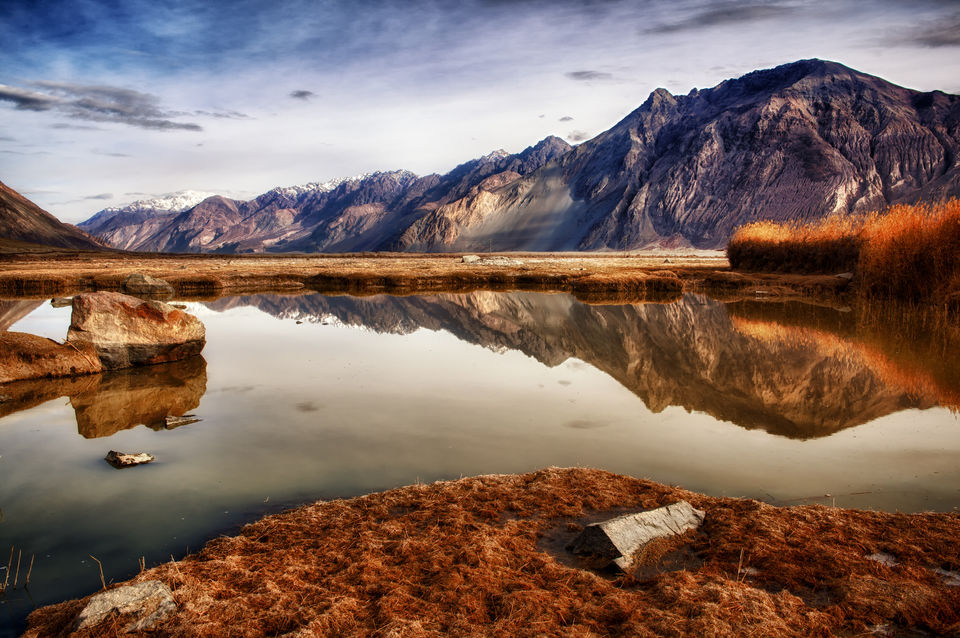 Nubra valley located to the north east of Ladakh valley is a high altitude cold desert. Highly appreciated for its stupendous panorama Nubra Valley is one of the must visit venturesome location. Situated about 150 km from Leh, Nubra Valley also known as the Orchard of Ladakh and was originally called Ldumra which meant the valley of flowers.

From thrilling high altitude passes to provoking pavements to breathtaking blue skies to mesmerizing lakes to tempting treks to sumptuous food to affectionate people Nubra valley has so much to offer to its visitors. Here is a list of things to do in Nubra Valley.

The Bactrian Double Humped Camel through the white sand dunes is the most patented activity over Nubra Valley. Starting towards Stok amidst the lush green vistas, followed by desert and badass field of visions that allows you to see both east and west horizon. The cost of the ride might vary from anywhere between INR 170-200 for 20 minutes and INR 50 for photography.

Nubra valley has been a target for many mountain bikers since decades as it also gives the opportunity to reach KhardungLa, the highest motorable road in the world, one of the epic mountain biking destinations that has surreal panorama that would attract any mountain biker to test his limits. Why I suggest you to travel to Nubra Valley by road instead of flying here is you will get to see the snow capped mountains, the desert of Hundar sand dunes and the lush green villages all three at once. Why would anyone want to miss such a lifetime escapade ?

Nubra Valley is a must visit place of any trekker for it is the most varied and beautiful treks in the whole world, crossing the major two passes along the Himalayas at an altitude of 15,000 ft (4575 m) is actually encircling along the edges of the Indus Valley down the Zanskar Valley.

Hundar, the heart of Nubra Valley, near to the Diskit monastery from where one can begin the trek which further passes through Lasermo La pass(5400m), connecting Nubra and Indus Valleys, followed by Digar La at 5,500 meters and thereafter, ascends to Digar village. From Digar village the trek goes through River Shyok and heads to Agyam village. Thereafter, the trek continues to Khalsar village followed by Diskit via Sumur. ( source www.ladakhtrek.com )

Who doesn't want to leave developed areas to spend a minimum of one night in a Caravan? To experience the dawn-dusk-midnight wrapped around in your sleeping bag you can spend sometime camping in Sand Dune Camp, Hunder, Sumur, Kahrdung La pass or even at the banks of Shyok river.

Khardung-La, the highest motor able road in the world located at 18,380 ft above sea level, lies in the norther part of Leh and is a gateway for Nubra Valley and Shyok River and is a very important tactical pass into the Siachen glacier. A ride that tests your strength and spirit is totally worth the hype and if you are riding alone, ride at your won risk. Perilous, though exciting journey through the so-called one of the most dangerous motorable roads in India, that has your adrenaline rush going.

The Shyok River also known as "The river of death", emerging from the Rimo Glacier of Siachen Glacier, spans a distance of approximately 550 kms in the northern part of Leh eventually meeting the Indus river at Keris to the east of the town of Skardu, flowing through northern Ladakh in India and the Ghangche District of Gilgit–Baltistan of Pakistan. Also sand dunes of the Shyok valley and the bactrian camel rides in the sand dunes is very popular amongst the tourists. Diskit and Hunder are the two accessible villages near by.

Hunder, a Village in Nubra valley, on the banks of Shyok River is also known as "The desert in the sky", is considered to be one of the important trade route. Once the capital of former Nubra kingdom, is now most popular for the camel rides in the high altitude cold desert. There are several ruined buildings, including the ruins of the King's palace, the Langchen Khar ("Elephant Palace").

A beautiful village in the Nubra Valley, about 150 kms from Leh, nestled very close to Siachen Glacier attracts travellers from all over the world to take a dip in the hot sulphur springs of the village. Panamik, surrounded by the attractive mountains and the mesmerizing of the green valley is a vision to observe. This charming beauty is well known for its Bactrian camels, Pashmina goats, Kashmiri carpet, Pashmina shawls, woolen socks, Apricots, walnuts, Apples, Almonds and some exquisite Kashmiri or Tibetan artifacts. The landscape is more dazzling during the month of September and October when the trees turn yellow with a tinge of red.

The Panamik hot water spring is situated at an elevation of 10442 ft above sea level. The spring water contains high amount of sulphur and it is believed best for curing rheumatism and other ailments.

Diskit Gompa where Maitreya Buddha stands tall, is the largest and oldest monastery in Nubra Valley, was founded by Changzem Tserab Zangpo, a disciple of Tsong-kha-pa, founder of Gelugpa (Yellow Hat) sect of Tibetan Buddhism. One can either drive or hike up to the monastery to witness the largest Buddha statue in the valley.

One of the extremely popular prayer festivals of the Nubra Valley, is Dosmoche or Desmochhey festival. It is also known as the 'Festival of the Scapegoat' which is celebrated at the Diksit Monastery. This festival is also celebrated in Likir, Leh, in the month of February when the Khardon peak covered with snow. The locals gather at the Diksit Monastery for the celebration. The masked dance performed by the Lamas dressed in a dramatic manner is the major attraction. It is an attraction of the victory of good over bad. The dance is also done to avoid any ill- fortune over the valley. ( Source : www.lehladakhindia.com )

COME FALL IN LOVE WITH INDIA !