Tirthan - A magical reunion with life

We took a wrong turn and it brought us here, a remote, isolated village community in the hills 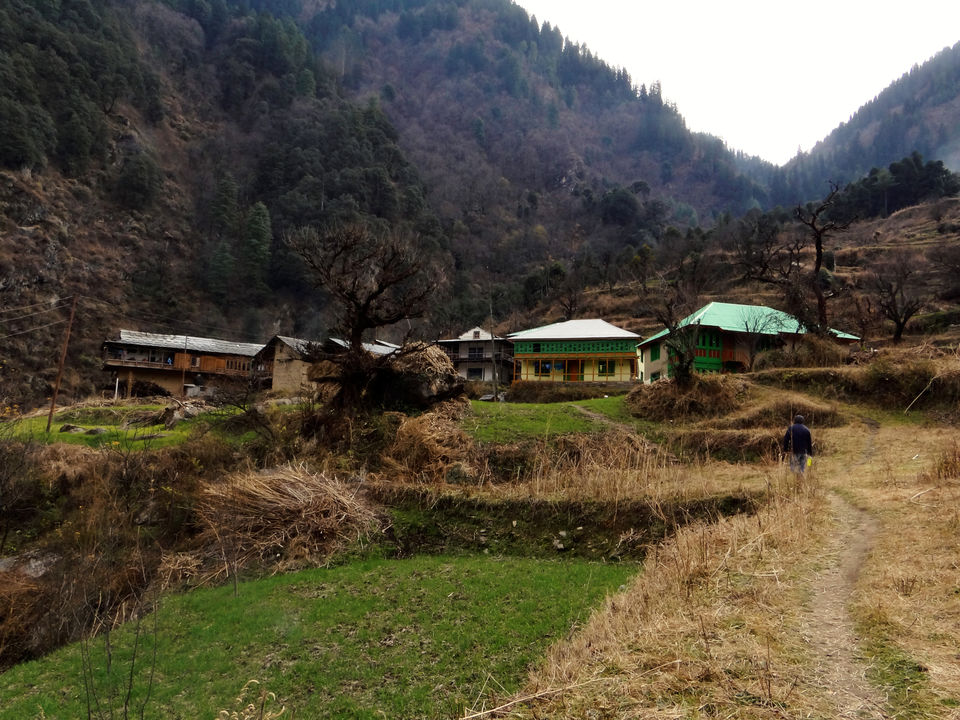 We as humans have deeply complicated our lives. Somewhere down the line all through our evolution, we started tangling up and have eventually grown so used to our overly unsorted and messed up lives that we no longer truly understand what it means to live with the simple joys of life.

I am no exception to this. I was born and brought up in a small town, in a family where resources were limited and so were the opportunities. We had no video games, no fancy toys, no gadgetry around. Life was old school. We used to go out and play with friends, have real conversations with family, with friends. Our games were not about catching a fictional character with a mobile phone. We used to run, we used to jump, we used to dance. Now that when I really think about it, we really had a life.

Things began to change when I moved to a bigger city. The human connection was soon replaced with gadgets and technology. And the more I had, the more I needed. The need was never fulfilled, until I found myself tangled in a unending web of gadgets that could deviate my mind, but could never actually quench the thirst of my soul.

And then I traveled to Tirthan.

Sometimes, going back to basics is not an easy choice. Of course, I do visit my home every now and then, Yet everything has evolved, has changed and it no longer takes me back to what I used to be back then. And that's when you really need to go someplace remote, where technology and advancement couldn't really creep in into the lives of the people.

Going to Tirthan was a random decision. We had all been longing to just get away, to sit down and talk for hours about our lives, about how it used to be so different and how it changed over the course of time. That's when I came across this amazing place, located in the Himachal, briefly connected to the world, yet lost in time.

To keep things even simpler, we skipped the hotels and instead chose to stay at a homestay in the middle of nowhere. We traveled overnight on a bus from Delhi and got down at a little unheard town of Aut near Kullu. From Aut, it took us an hour and half of bumpy ride through narrow roads crisscrossing the hills to reach the village Gushaini. That's as far as our hired hatchback could take us. That's when we met our host Mr. Chander. He had come all the way to pick us up in a Mahindra 4X4. We were driven through a relentless track, barely wide to extend beyond the two ends of the vehicle and stuffed with rocks, protruding from every inch. We held on to our nerves until we reached a point wherein we could go no far. We gladly disembarked and continued the rest of the journey on foot.

The homestay we had booked far exceeded our expectations in terms of cleanliness and needless to mention, the view was exhilarating. We had a long shared balcony / verandah overlooking the valley with Teerthan river flowing down below. The sound of water rushing through the rocky terrain echoed all through the valley.

And then the moment struck. As we reached to our phones to instantly click a snap and announce our arrival into this magical lands to our virtual friends on social media, our signals were gone. Mr. Chander informed us that there is no network coverage in this part of the world. The Digital nerds that we had become, we were suddenly loaded with anxiety. We had over time become so dependent on that small gadget in our pockets to feed us with entertainment and information, that we could barely imagine our next couple of days without its role.

The first couple of hours were a little weird. We kept checking our phones for signals. every now and then. And then eventually we were set free. We were served, what would be the most minimalist meal I ever had on a vacation. And I savored it to the very last bite. Mr Chander's wife was indeed a great cook.

With lunch gutted down our empty bellies, we stepped out to explore the surroundings. We had no place to go, nothing to check off our list. We just kept going forth, following the river, for as far as the rocky paths could take us. We came across the local houses, met a couple of local people, and one of them gladly let us pluck an orange from his tree.There was nothing breathtaking or fancy about the place. Yet, we cherished every small thing we could see, an orchard, an old house, a wooden bridge and of course the ever changing courses of the Tirthan river.

As it grew dark, the temperature began to fall. I was disappointed for not being able to know exactly how much it had dipped. But when you out there to get back to the basics, figures don't actually matter. Mr. Chander arranged for a bonfire, out in the open. And pretty soon we found ourselves engrossed in deep talks about our lives. We had all known each other for years now. Yet it somehow felt that this was the first time we had actually had a proper conversation.

Mr. Chander soon brought out some snacks to keep us going. The chicken Manchurian and the chicken legs took away our attention completely. We were joined by his cute little son and his dog. We felt we had been chatting for hours. A deep silence surrounded us. The sound of the river had somehow mysteriously blended into the silence and we could hardly notice it. I looked up towards the sky, the stars were twinkling back, crisp and vivid. Living in a city choked up with pollution, we never get to gaze at the stars.

Post our snack session Mr Chander too joined in our conversation. He told us his life story, how he grew up amidst all the hardships, what he planned for the future. I just love the people of Himachal. They are simple, straight to the face. Their conversations are clear and honest, not trying to impress anyone, just stating the facts as they are. Soon we were deep engrossed in a political battle. And the conversation kept swaying from one thought to the other. We soon found ourselves dancing by the fire without music actually. Post dinner, we decided to call it a night.

Gullu - our local guide and escort 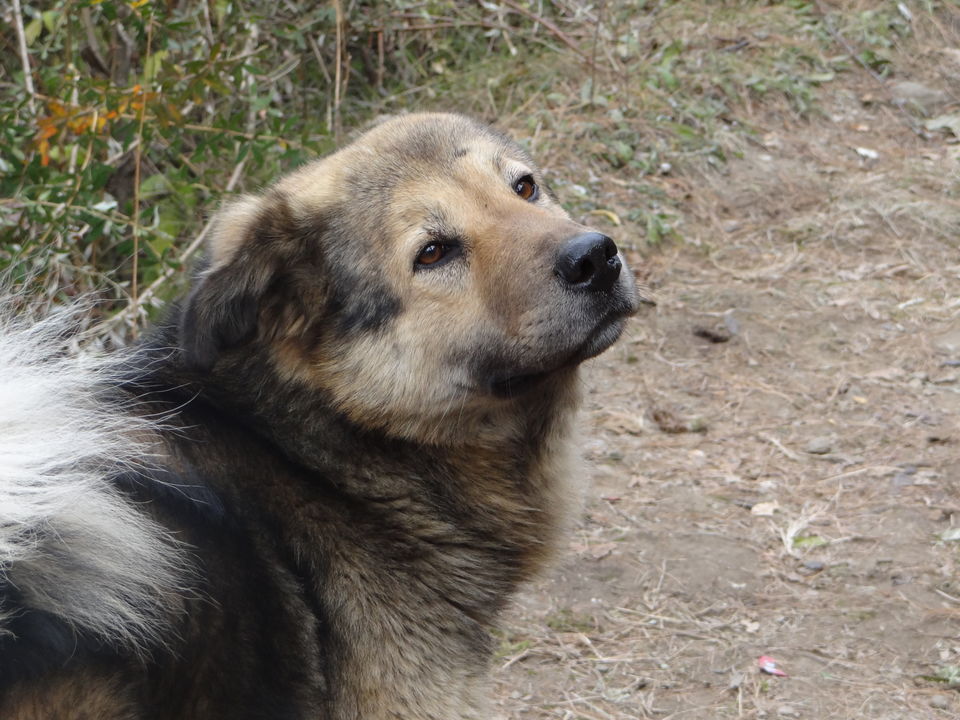 The very next morning, we felt fresh and energized. It was a different feeling for sure. And we all decided to make the most of the day. We went to trek till the entry gate for The Great Himalayan National Park. Gullu. Mr Chander's dog, gladly accompanied us. Hours later, we returned exhausted. Mr Chander had already prepared lunch. And we found ourselves hogging it up quickly. Post lunch, we checked out and decided to walk back to Gushaini. Mr Chander offered to carry our bags. We denied, but then it was tough convincing him otherwise. 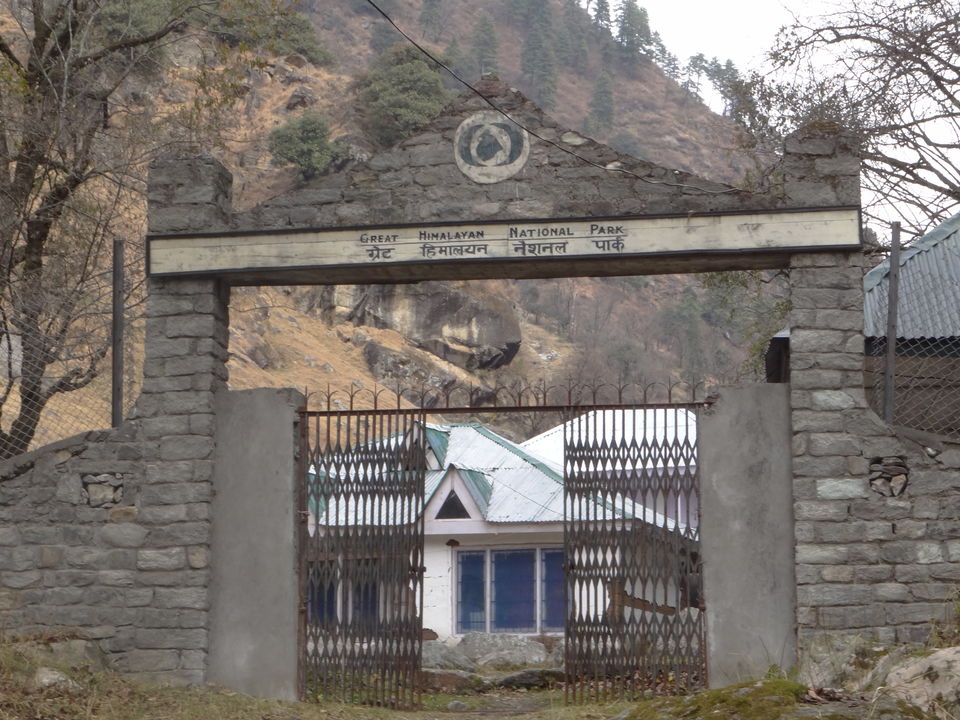 Reaching Ghushaini, we missed the last bus, barely by minutes. Mr. Chander was quick to make a few calls and arranged an alternative transportation quick. Once we were all ready to depart, I looked up at him. He was standing there smiling back at us. I couldn't resist a hug for all that he had done for us. We kept waving back at him until he was way beyond our vision.

I had come to Tirthan, barely to spend a couple of days away from the humdrum of life. Coming here, I learned an entire chapter on how we could make turn our lives way happier barely by toning it down to the utmost level of simplicity as possible. All physical things that surround us, have a shelf life of their own. The experiences that we share with people, those midnight conversations, that walk in the evening, they remain etched in the deepest corners of our heart forever. And they are far too valuable for any amount of money to buy. The places that you travel to, the people that you meet, they change you as a person and transform you into a being who is more at peace with the surroundings.

My adventures will continue for life.......