Tucked away in Time: Turtuk 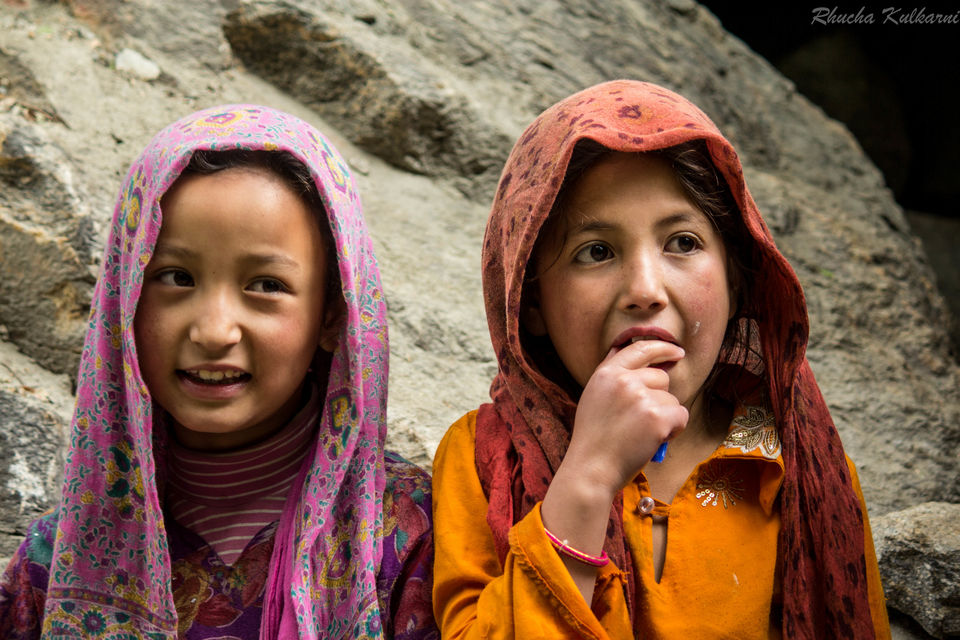 The vast barren browns seemed to play an unending game with my mind, which craved for a bout of freshness. I was in Ladakh- cold desert of the north. Where the winds howled at night and twinkling stars adorned the cloudless skies. It was no wonder that the natives turned to the simple Buddhist ways of life in such conditions, with fluttering prayer flags and colourful hangings adding zest to this torrid terrain. As we moved further north-west onwards from Nubra, being awed by the bizarrely magical landscapes, little did I know that soon an oasis with blossom, distinctly different from arid Ladakh. This was to be Turtuk- a homely hamlet of the Balti people, tucked away in the folds of time.

A Picturesque Travel in Time

As I crossed the gushing rivulets emanating from the Shyok river, hanging fruit and flourishing green crop greeted my eyes. The river literally translates to “River of Death”, but to me its sparkling water could epitomize nothing but life! Picture perfect wooden bridges, gurgling streams echoing nature’s music as they traversed the humble homes, and the fragrance of ripened apricots. All this and more greeted me into this wonder-village. Far removed in time from the shackles of the modern world, nature run its course in this lost little village. But it was not just the landscapes that marvelled, history of war and politics and a unique people of Balti origin is what brought me to Turtuk in the first place. The town is amongst the closest ones to the Indo-Pak border. Interestingly, it was a part of Pakistan till the 1971 Indo-Pak war, after which it got incorporated into India. War sagas are seen in its landmarks. As I walked along a mountain ridge, I witnessed pockmarks of bullet fire- tell-tale remnants of rife and strife. Today, Turtuk stands in stark antithesis to a savage past, thanks to the now peaceful existence of its people- the Balti clan. It was this unique element of culture and clan that attracted me to this picturesque haven. But for now it was time to soak in the almost-spiritual silence, as the mighty Karakoram ranges and its cool winds carried forth forgotten stories for miles.

A Unique Clan and Culture

The people of Turtuk are a clan far removed from the Tibetan Buddhist settlements of mainstream Ladakh. They come from the origins of Baltistan, which was a separate kingdom until the 16th Century, rules by monarchs from Turkistan. What immediately meets the eye are the exquisite good looks of Central Asian lineage- ruddy pink skin, wistful light brown hair and agile, nature-friendly cheer amidst the Balti folk. The village has only recently been opened up for tourists, offering a glimpse into how life would have been before the vagaries of modern life hit us. For the Balti people are a simple farming folk, cultivating barley and fruits, and tending to livestock to earn a basic livelihood. More insights into this peculiar people unfolded in the only museum dedicated to the Balti kings.

Such appalling beauty of place and people compelled me to pull out my camera. But what my lens could not capture, I captured in my heart through candid conversations with the locals. The Balti people are amongst the last remining mix of Tibetan and Indo-Aryan descent, and speak a mix of Persian and old Tibetan- a long forgotten language in most of the world. These hardcore believers of Islam thrive in this Buddhist region, yielding a living example of secular peace. The locals shared stories of their lives in these unforgiving landscapes, and I admired how tolerance and understanding bred so easily in the wake of hardships, both man-made and natural. I got a taste of their generous nature, as they offered me heaps of delicious apricots, plucked fresh off the trees. These are some of the best apricots in the world, being donated for free to a complete stranger! Such was the hospitality and warm welcome that the Balti folk extended, more like friends and family! More was in store as the homestay offered me a traditional meal of phudinichu, a nourishing stew made of apricots! Now that’s called coming back to homely hospitality!

A Vantage Point over Misty Mounts

Getting up to the crisp mountain air and after some frolicking across the numerous streams and fields while feasting on divine fruits, I decided to play the daredevil and ascend one of the hills to visit the only standing Buddhist temple in the vicinity. Evoking positive vibes, stood this temple on a rocky ledge overlooking the mountains that called Pakistan their home. It was later that I learned that this Buddhist temple was in a good state courtesy the maintenance extended by the local Muslims. “A true example of rising above caste, creed, and religion, and tending to the greater good of humanity”, I thought. I stood on the ledge, looking as far out as the eye could fathom. And it was then that the local guide enlightened me on the other denizens of this mystic land. It was not just the people, but the wild denizens too were unique out here. Stories of snow leopards and ibexes prancing around the remotest of regions served for some interesting talk over some yak butter tea. As the towering mountains met the skies, I looked out into the marching mountains, thankful that such places still existed, and provided man the semblance of peace and oblivion he sought from time to time.

Turtuk is 85 km from Hundar or Nubra valley, and about 220 km from Leh. Best reached by hiring a local taxi.

• Entering Turtuk requires special permits called Inner Line permits, make sure you get them in advance either online or through your agent/driver.

• Make a stop at Diskit monastery enroute, where the shimmering statue of Maitreyi Buddha stands tall in stark contrast to the earthy browns.