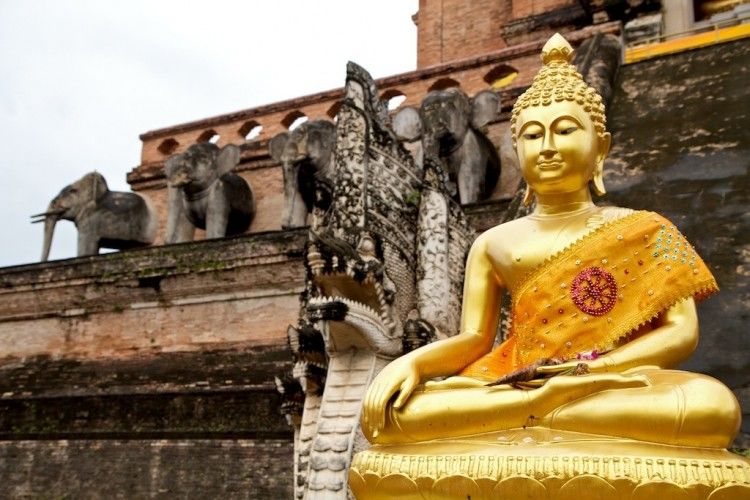 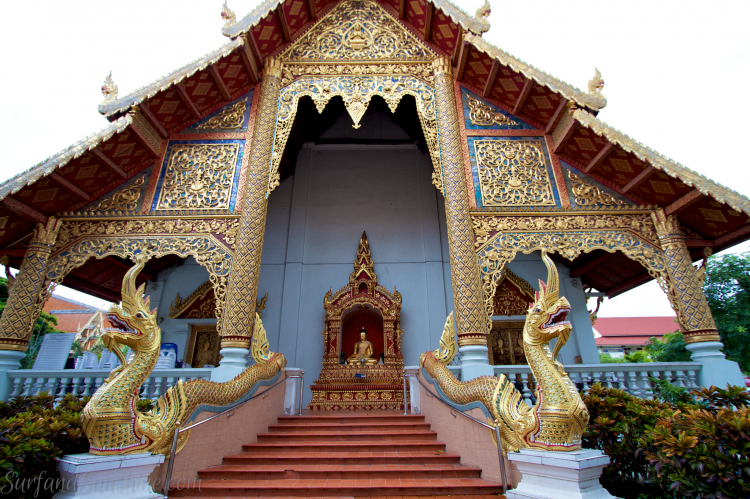 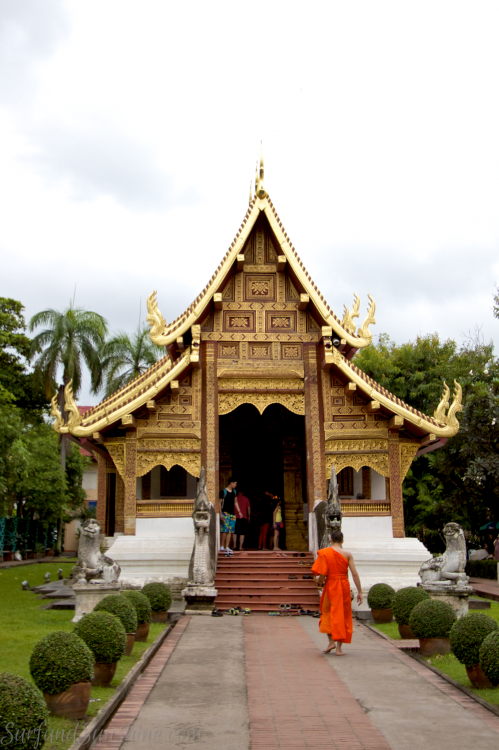 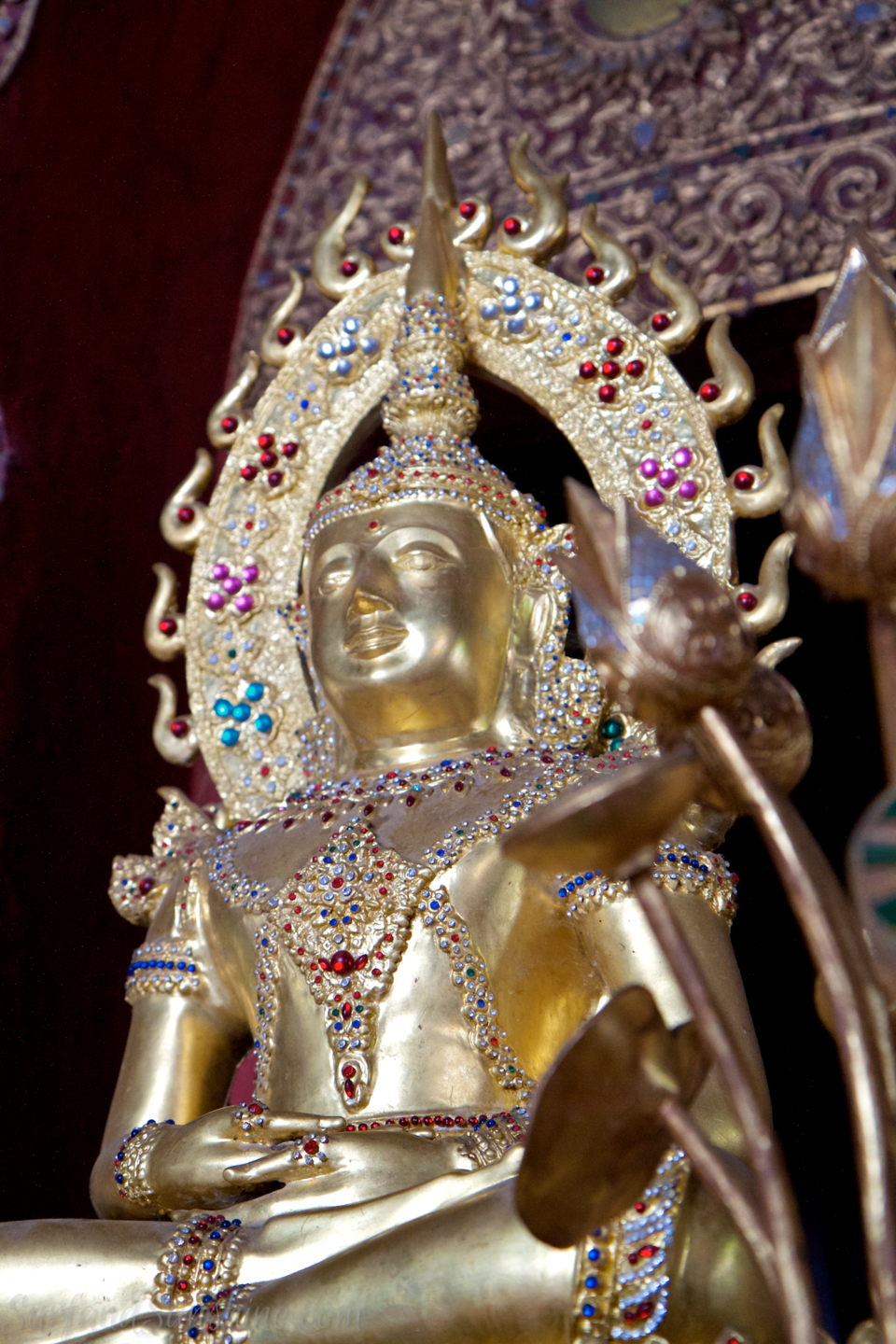 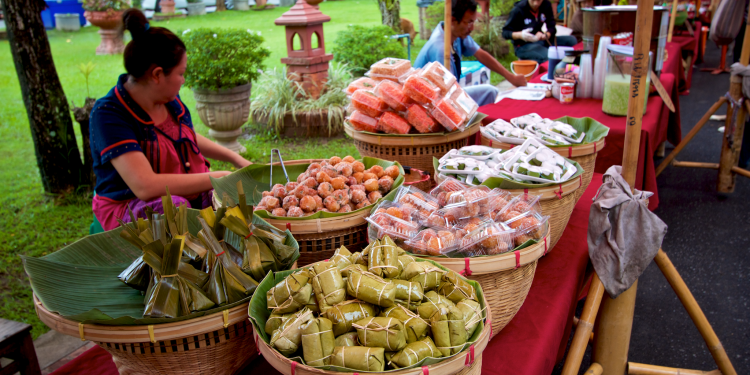 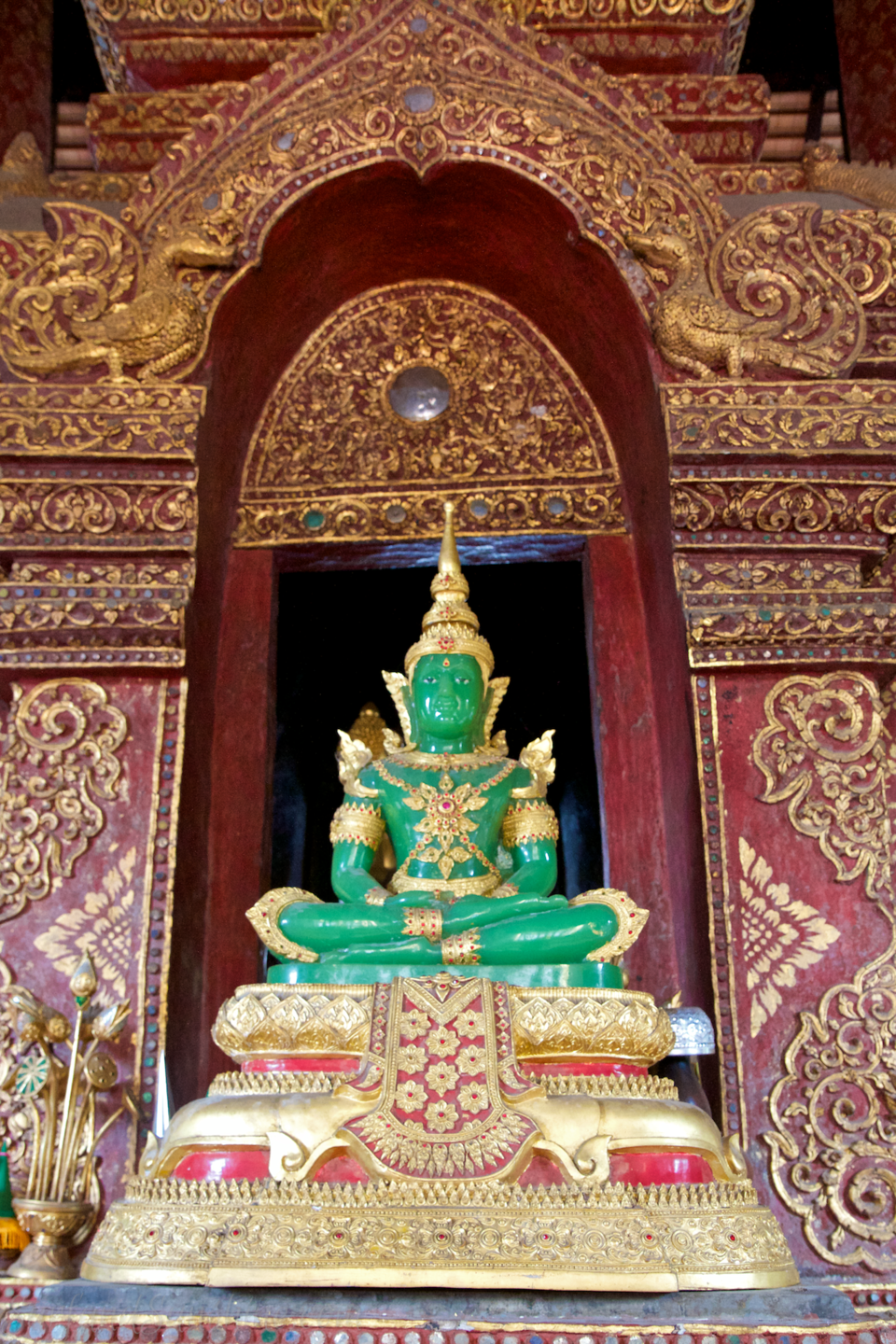 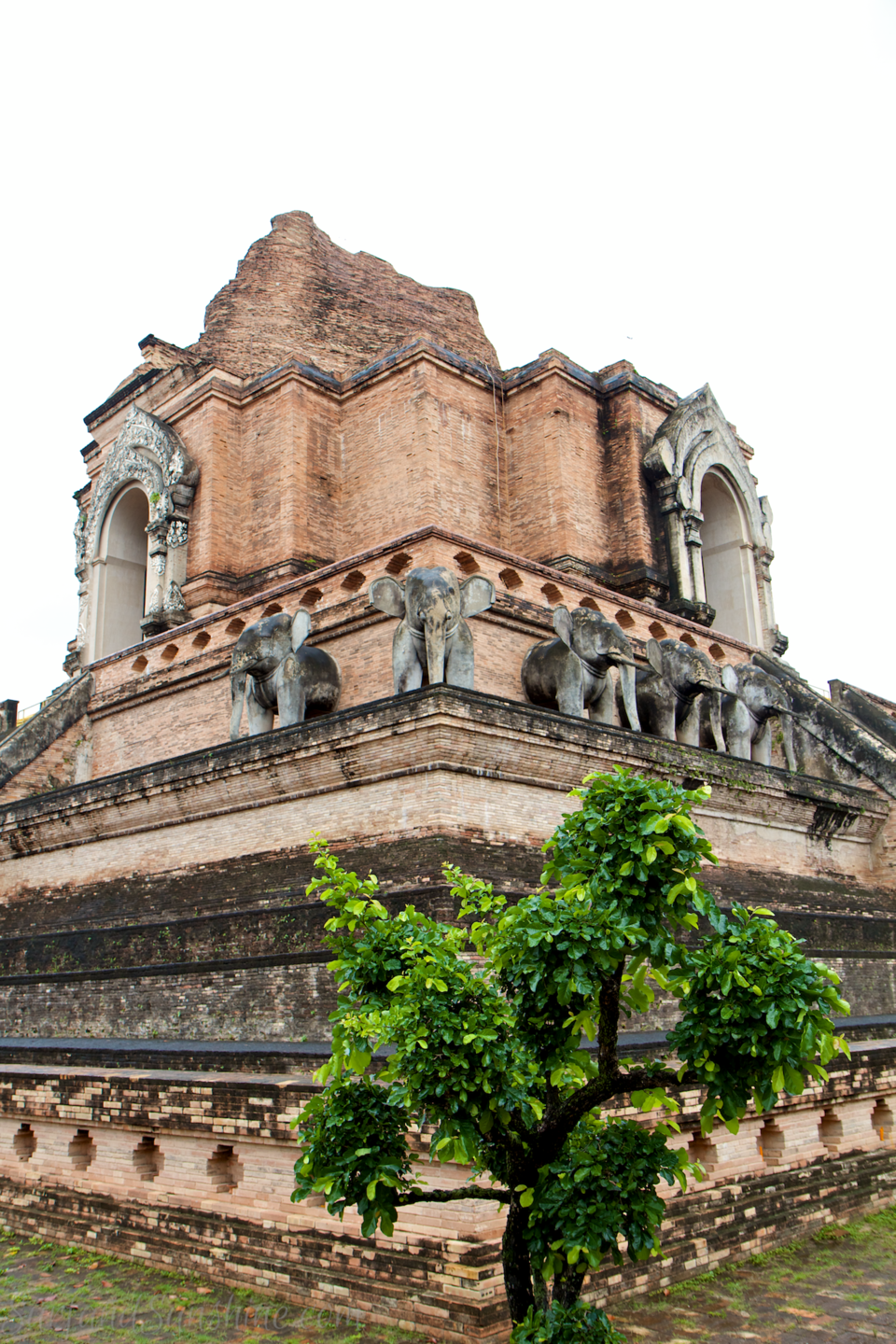 Once the capital of Thailand’s Lanna Kingdom, Chiang Mai serves as a northern hub to many interested in it’s vast cultural and natural offerings. Known for it’s silk and hand woven textiles, this “Rose of the North” is a welcome respite from the hustle and bustle of Bangkok. Chiang Mai is surrounded by mountains and a lush country making for an all together different experience than the capitol. Considered the center of Buddhism in Northern Thailand and overflowing with more than 200 temples, or wats, two of the most popular are Wat Phra Singh and Wat Chedi Luang.

Originally published on Surf And Sunshine.

HotelsMap
As Chiang Mai’s most revered temple, visitors flock to Wat Phra Singh to take in it’s Lanna art, architecture and resident Phra Singh Buddha (and therein lies the origins of it’s name). Wat Phra Singh, whose main entrance is guarded by lions, sits in the old city centre of Chiang Mai at the end of the main street (Rachadamnoen Road) and was built in 1345. The Phra Singh Buddha, also known as the Lion Buddha, is housed in a small chapel at the back of the temple grounds. The building is beautiful with its three-tiered roof and carved gables. The inside is just as amazing with gold-pattern stenciling (called lai·krahm) and extensive murals. Purchase incense and flowers to donate during your visit and you may receive a blessing from a senior Monk. The grounds also feature the main chedi with a unique octagonal shape along with a learning center for boys and young men to study to become Novice Monks. Under the shade of red umbrellas, a street market lines the walkway to the rear of the property and offers clothing, trinkets and food. The absolute best bowl of Khao Soi noodles can be had here for just 40 Thai Baht (about $1.30 USD). 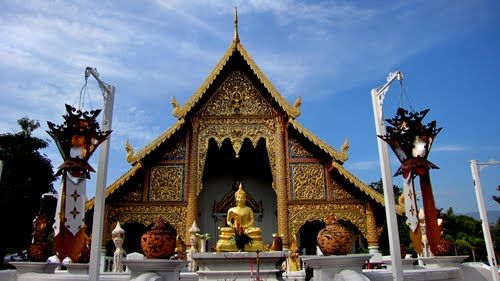 HotelsMap
Also known as the Temple of the Big Stupa, this amazing ruined temple in the heart of Chiang Mai dates back to the 14th or 15th century. King Saen Muang Ma (r.1385-1401) began construction on Wat Chedi Luang in 1391 to hold the ashes of his father, Ku Na. Then, it was then given the great honor of housing the Emerald Buddha, the holiest religious object in Thailand (which is now kept in Wat Phra Kaew at the Grand Palace in Bangkok). The temple continued to grow to a height of 280 ft until 1545 when a severe earthquake toppled part of the great spire. Even then, it remained the tallest structure in Chiang Mai until modern times. The ruined brick chedi of Wat Chedi Luang now rises an impressive 60m in height and is still home to many Buddha Shrines. Although partly ruined, each of it’s four sides are guarded by stone nagas (mythical snakes) and elephants stand guard midway up the platform. This “Royal Pagoda” is currently being renovated and the work completed thus far is stunning. Be sure to take a walk around the entire structure as there is more to be seen on the back side, including donation boxes and bells for each Zodiac animal. According to ancient local belief when people die their spirit will stay in the chedi of their Zodiac animal sign. Although each sign has an official temple in Thailand, these donation bins allow visitors to pay homage to their sign without having to travel to their specific temple (which may be some distance away from Chiang Mai). Next to the chedi sits a large assembly hall with round columns holding up a red ceiling above a Buddha known as Phra Chao Attarot. Dating back to the late 14th century, this large standing Buddha sits high above the crowd in the back of the hall. The entire area in front is a mesmerizing array of Zodiac banners purchased and placed by the faithful in hopes of bringing merit to themselves and their family. Outside to the left, visitors have the opportunity to leave a donation in turn for writing on a tile that will be placed on the roof of the structure. On the other side of the chedi is another pavilion housing a reclining Buddha statue. Don’t miss the large Dipterocarp tree (gum tree) that by lore protects the temple and the city of Chiang Mai in the southeast corner. Legend has it that if the tree is to fall, a catastrophe will soon follow. Also standing guard is the ‘Spirit of the City’ pillar, enshrined next to the tree in a cross shaped building. 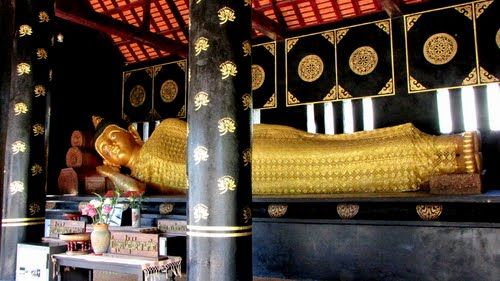