Uttarakhand is burning – Is anyone listening? 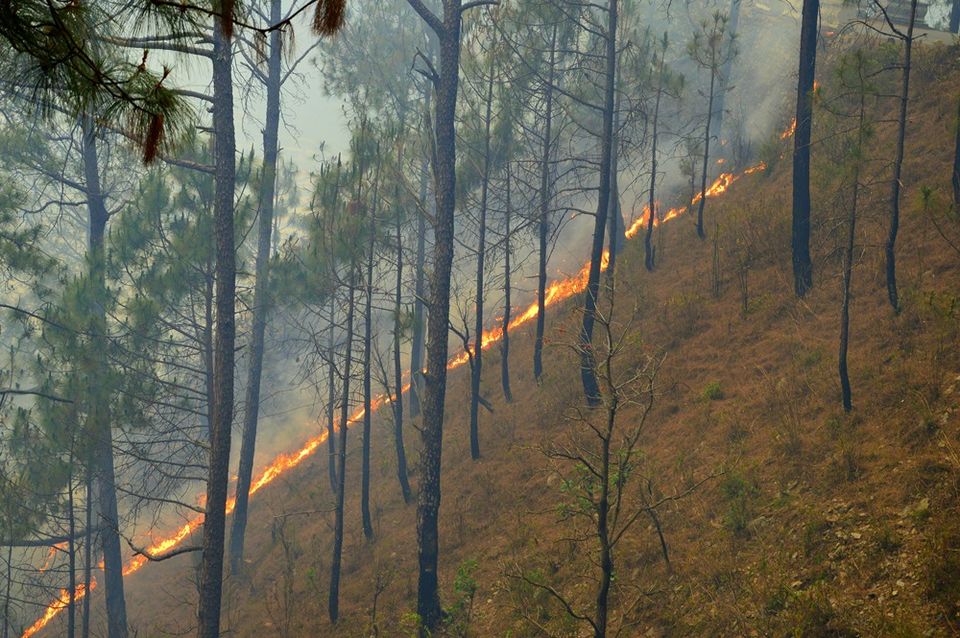 Hills make a nice escape for the burning plains during the summer season. But the growing temperature and unfiltered UV rays have now started affecting the mountains. In the last few years, the lower hills of Uttarakhand, Himachal Pradesh and even Jammu and Kashmir have started falling into the epidemic of forest fires. This fire harms a huge population of animals, birds and kills a number of natural herbs and rare plant life, causing the death of the hills.

In 2016 itself, the forest fire burnt a total of 3,500 hectares of forest land. The following years, the cases increased and became more widespread. This year, more than 3000 forest fires have been observed in a mere timeline of eight days.

Since summer season is also a time when a majority of trek routes in the hills open, these incidents often put the lives of these trekkers in danger. As of now, the forest of Kumaon division, especially those in Nainital area are said to be the worst affected. Apart from Nainital, a number of fire incidents were reported from Almora, Nainital, Bageshwar and Champawat districts in Kumaon division and Uttarkashi, Tehri, Pauri and Chamoli in Garhwal.

The dry spell is a prime reason behind the fire. The autumn season removes all the dry leaves from the trees. These dry leaves stay in the forests without any medium to remove it. Once the summer arrives and the temperature in the lower hills starts getting higher, these leaves add the first spark to the flame.

Being on the lower altitude than Himachal Pradesh, Uttarakhand’s dense forests cause obstacles for a widespread forest clean-up. Many of these forest lands are protected and prevent any human activity in the region.

Fire due to natural causes

Fire normally effects the pine forests because of continuous heat and friction between dry pine leaves. Pine leaves falls in autumn season and catch fire once the temperature rises. They burn at a faster rate and once it starts, the fire spreads quicker than one can imagine.

- Locals often have to clear agro lands for their annual farming. As a time and cost saving resort, they choose to burn that designated area. The problem is that their area is cleared but the fire spreads further and often reaches near residential areas.

- Campfire often plays a role in spreading of fire. It is not only trekkers but shepherds and local farmers who burns woods to spend the night in jungle, who use campfire. Always remember to extinguish the fire once you leave the campsite.

- Timber Merchant takes fire burning as an excuse to cut down the trees in the forest land. Any such activity if sighted, needs to be reported to police.

The sensitive satellite data report is also a huge problem as the recordings often mark any fire related activity as forest fire. Even if the readings are coming from a household, they are noted as a fire related alert. For the forest department, it becomes really tough to segregate the real news report until the alert is confirmed via news or in person.

While the forest fire is a growing epidemic and since the beginning of February 15 till May 21, 771 forest fires have gutted a total of 1213.766 hectare forest area. This has caused a revenue loss of over more than 21 lakh.

The growing problem of global warming is affecting the world and everyone who is concerned is fighting on their behalf. However, small contributions from the visitors who come to explore this state can help in curbing the fire on their own level.

- Stop throwing plastic bottles, wrappers, packets or anything that can burn and help in spreading the fire

- Avoid smoking while traveling to such places. Even if you do, make sure that you don’t throw burning match sticks or half burnt cigarettes on the ground. The fire spreads very quickly in the hills and it can also prove harmful to your own life

- Don’t throw glass bottles or any item made of this material. Glass acts as a magnifying source that burns the leaves or paper very rapidly

- Use social media to report such incidents if you see one. The more people report it, the faster it gets in the notice of the forest department and other officials concerned

Forest fires are a never ending cause of loss of life and property in the hills. Before traveling or trekking, make sure that there are no fire incidents reported in the area. Last year, 10 female trekkers lost their lives in forest fire on Kurangani Hills in Tamil Nadu.

In case of fir observed in Hilly areas, contact on these numbers to alert the concerned authorities

While Uttarakhand forest fire is being met with a small amount of media and general attention, such reports will help concerned authorities provide better equipment and take action to bring an end to this issue sooner.