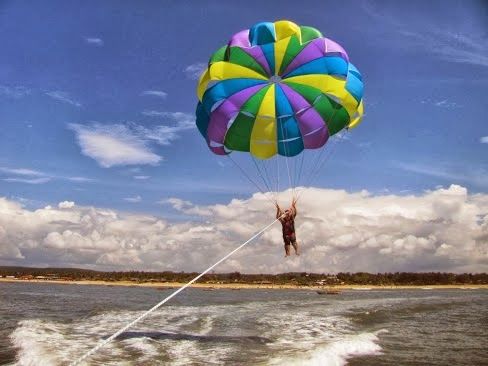 In this story, you will be given the information about Goa's major attractions, about water sports. The main reason for our arrival in Goa was also Water Sports, which we had to do for major water activity, were Jet -Ski, Paracelling and an important work to raise sea water and wind. Was also. All of us were not interested in the Old Goa Philosophy here because we had only three days for a place like Goa. Till then you see a good Goa picture and click to read in detail -

Paracelsing sea and sky together

In this way, with the breakfast of the hotel that was started on our second day in Goa and all of them quickly got ready because today's day was very special for all of us. We all had the idea that none of Kalangute or Baga beach would be right for these activities, which was known by the grace of Google Dev. So what's the matter and what we walked for, to see the magnificence of Kalangute, which was not far away from our hotel, at a distance of only three kilometers, but till we reached there, the Sun God had almost reached its peak Soonly, the hat was bought for everyone, which is also the identity of Goa. As far as Kallung Beach heard, it became more crowded and crowded. See this a picture of the crowded Kalangutte Beach-

The color of the sea and the sky seemed almost a bit in the middle of the Kalampus beach clouds filled with the crowd.

The mind was so great that when it fell into the sea, the main task was to find out where water activity is happening, how many are there, where to take the ticket. The sun was also very fast, and somebody said that this is not happening here, if you go to the garden then we will walk further. Baga beach is only two kilometers from here, or say there is only extension of Kalangute beach. After reaching there our end was ended. But for the four people, the whole five thousand of jet-ski and percassing took place, which was a lot, and if the dolphin was to be seen, then one thousand rupees of one man seemed to be probably a man. Well as long as we reached the time of seeing dolphins, the jets left for the ski and paracelling and the dolphins left for the next day, the amount of money they were asking for it seemed more than necessary. Was there. Perhaps there were two reasons why one was not started right from the season and Kalangute was more expensive than Baga Beach needed.

After taking the ticket, it was decided that two people will be together with jet-skis and one parachseling and they will see the surviving children. Jet-skiing is a fun and adventurous experience in itself. Those people prepare you for wearing a life jacket and a man walks together to run it. Meaning fully prepared, send a high speed scooter in the ocean waves, it is very exciting experience, how do you move forward by blowing the waves and how come the waves come and dampen you with water is. Together, the mind became happy Take a look at how many preparations and how many people send together a jet-saki -