Week Long RoadTrip (Manali to Leh and back) 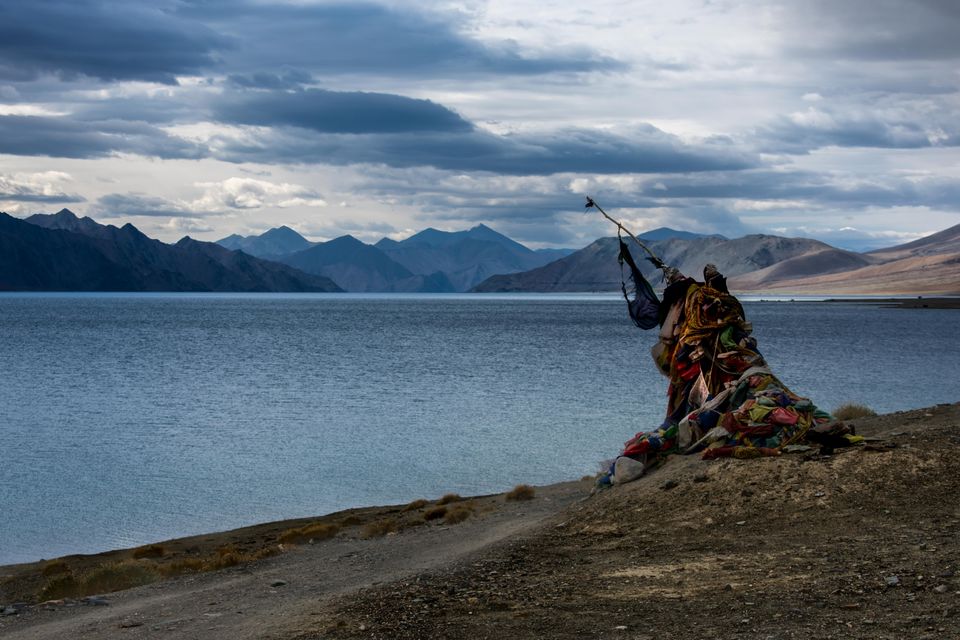 We started from Mall road, realising soon that rear brakes are not offering much back pressure. We talked to the Mechanic/Owner, but he showed us that it is working fine and it will get better as you get the hang of it. So, we rolled on in forced optimism...

Rohtang was amazing, mystical blend of green mountains and white clouds. We were already so much excited, not even knowing the scenes to come.

This seismic ecstacy did not fall a bit even after standing in a queue of 5 kms traffic jam on Rohtang Pass. We worked our way out from that long line of parked cars, only to realise later that we have 'no rear brakes'. It was now very clear that we were only play-stroking the paddle, and there being nothing slowing us down besides the Front Discs, so we managed to slow down the bike by other means, which we realised later on, were quintessential for what was to come.

how did we manage to slow down the roller coaster?

"When you don't find the match, you find a rock"

..circumstances are the best trainer

The plan was to race it on a straight and clear path, but slow down as soon as the clarity starts to vanish. Brake it before the turn to a dead slow speed, but we later found out when we lost the front brakes too that this plan was taking too much of use of the brakes. So, we decided to slow down the bike through gearing it down gradually, and then using the brakes when it is the 1st gear, so as not to exploit any of the means but we saw that 1st gear was not that slow after all. Hence, I used the last dagger in the arsenal by toning down the idle RPM, which slightly grazed the speed but it was all welcomed in the situation.

We stayed in a tin-sheltered room shared with two other people for Rs.250 a head.
The view the next morning was gorgeous as we came to realise the beauty of waking up in a valley...waterfalls, green mountains with encroachment of ice at the apex. The Tibetian flags were flourishing the view with confidence and prosperity.

Started from Manali on Thunderbird 350
Enthusiasm and confidence overshadowed the fear of riding without rear brake
It was raining already on Rohtang, we felt that Sarchu is going to be very difficult in this way
Forecasts showed overcast all over J&K.
Day's Cost: Rs400 per person (including stay/food) 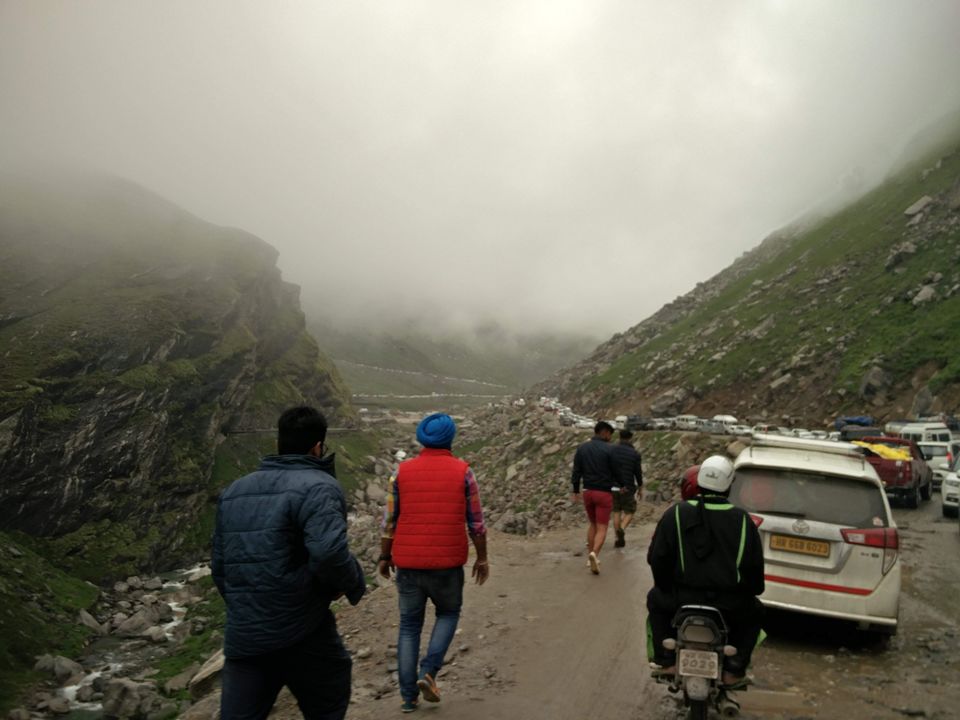 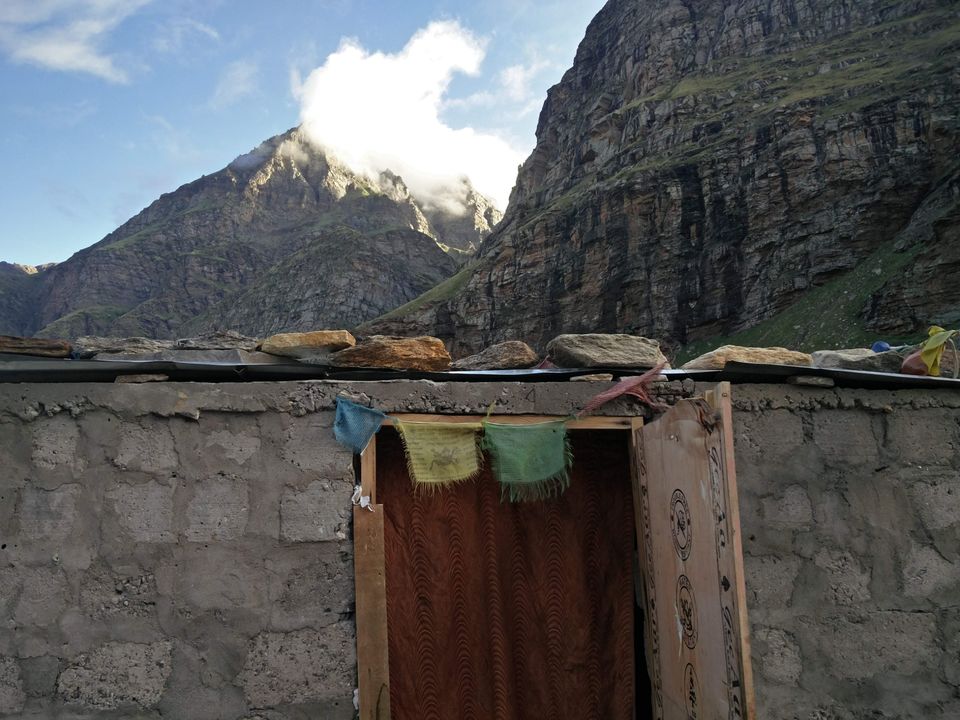 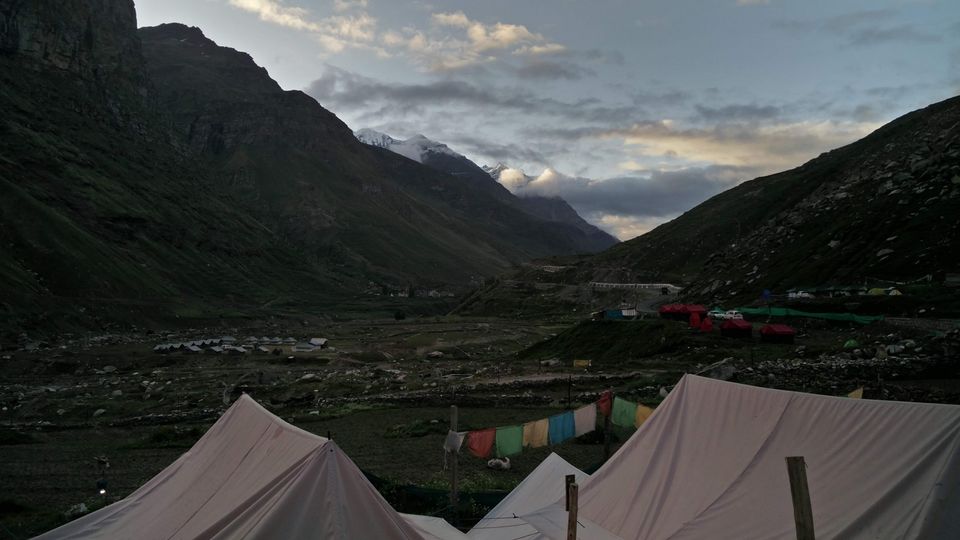