India Travel GuideIndia TripsWhen Jim Corbett National Park Didn'T Allow Us For A Jungle Safari... What To Do?

When Jim Corbett National Park didn't allow us for a Jungle Safari... What to do?

where the raw lands meet the planned grounds 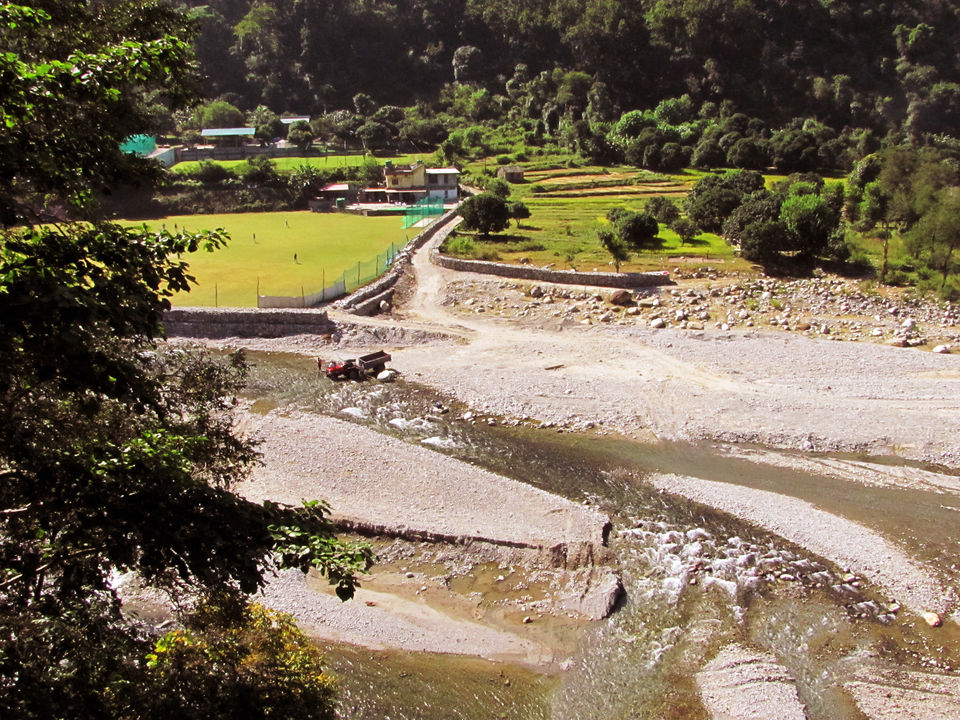 Growing up, and experiencing life.. Life gave me my first trip without parents to the Jim Corbett National Park in October'12.

Not by road, but the journey started by train and the adventure began even before entering in the train. The train, Corbett Park Link Express, departs from Old Delhi Railway Station at 22.30 every night with a arrival at Ramnagar 4.50, which was running fast and we reached Ramnagar at 4.30 AM. This was just the beginning...

Oops, missed out the train adventure. So we were 5 traveling along, me, my sister, two of my female cousins and a male cousin but the tickets we had confirmed were only 4 and all scattered. Just as we realized that the fun was going to be delayed, a boon happened. A big group travelling together, themselves made us use the complete compartment, we pulled down the curtains and even the second AC coach, we had our own very private cabin- lights off and the torches on- we start gigs and giggles, games and snacks following a quick nap awaiting the early morning arrival.

In the beauty of the dawn sky, we stepped down at the Ramnagar station which stands to be at distance of around 15 kms. It was a pick-up from here which was arranged by the resort. The drive started, initially a town, all sleeping in the early morning hour which gradually dived into the woods. We see the sky touching trees, the dense greenery and many boards around- warning and scaring us of having a wild cat around who would surely not welcome an unknown guest to his den. Tired sitting next to the window, I see the sky changing from black to blue, lighter to the hues of orange and yellows and a bright morning ahead.

Getting down the car, we see this magnificent pathway, leading to the resort. Superb contrast with no pixel extra! 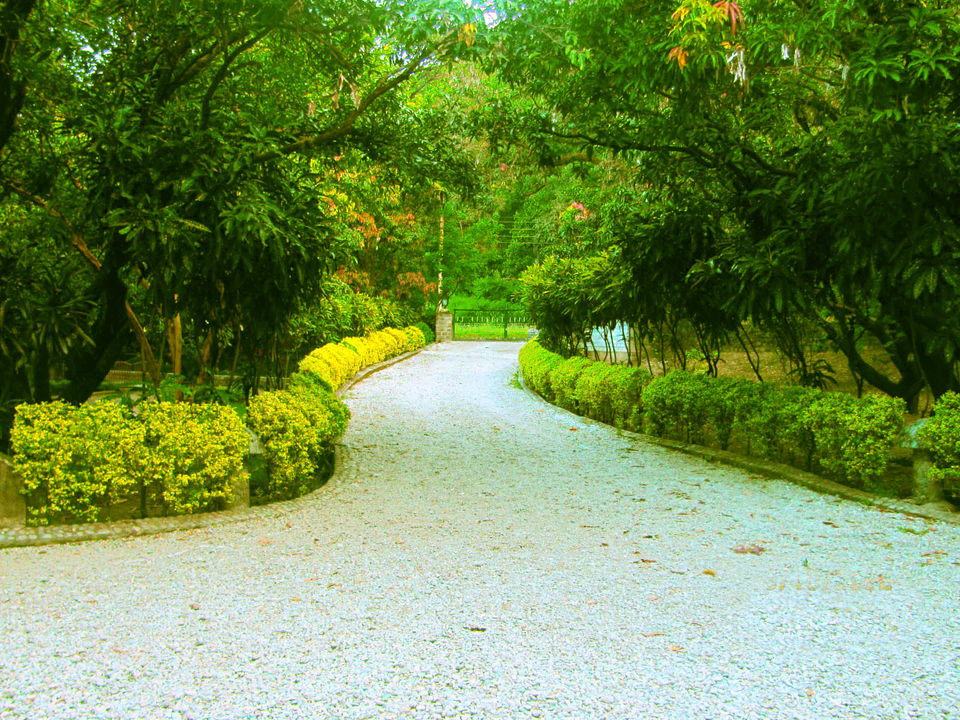 Setting in the room, we realize that there won't be a jungle safari due to some government rules and so is the adventure turning to a resort story. But the story got a twist, the adventurers inside got active and we went down to trek in the forest, of course not alone, with a employee and a local resident from the resort. No elephants, no jeeps, but we set our safari on foot.

Up and down the hills, getting in the forest, with a major excitement and fear of hitting up the wilderness of the jungle. Walking down the woods, holding one another in a row, we see a river flowing down. Beautiful clean waters, flowing down and getting lost in the green. the waters covered the stones as a plastic wrap and the small falls glittered like diamonds. The sun above bright and prismatic adds on to the picture perfect scenery. 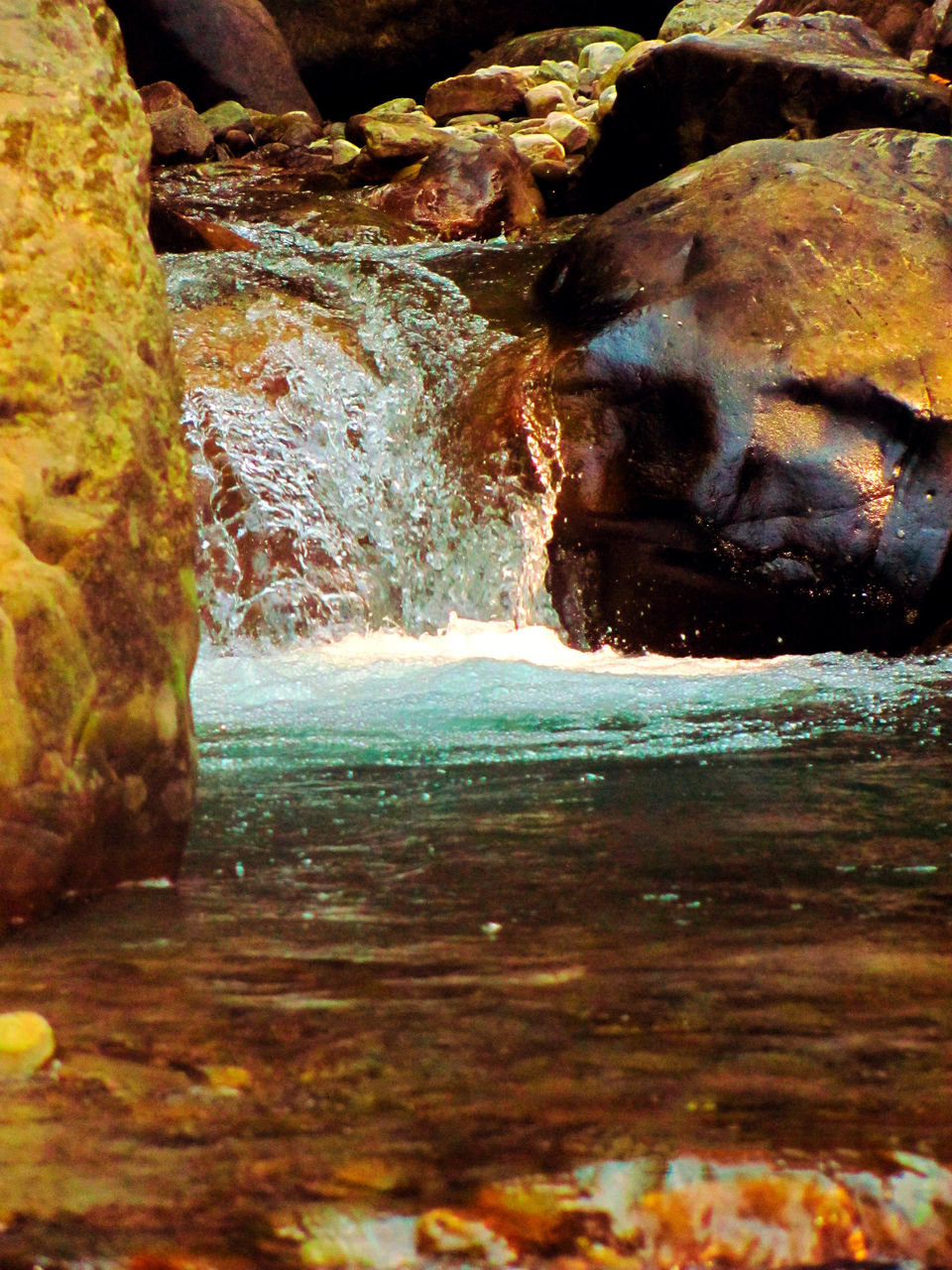 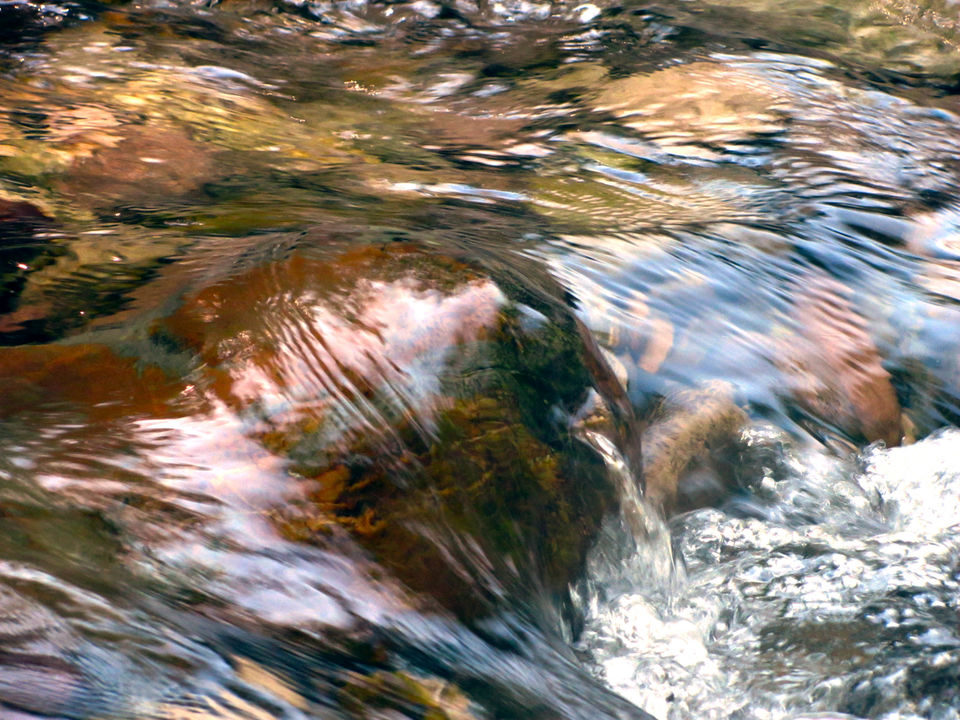 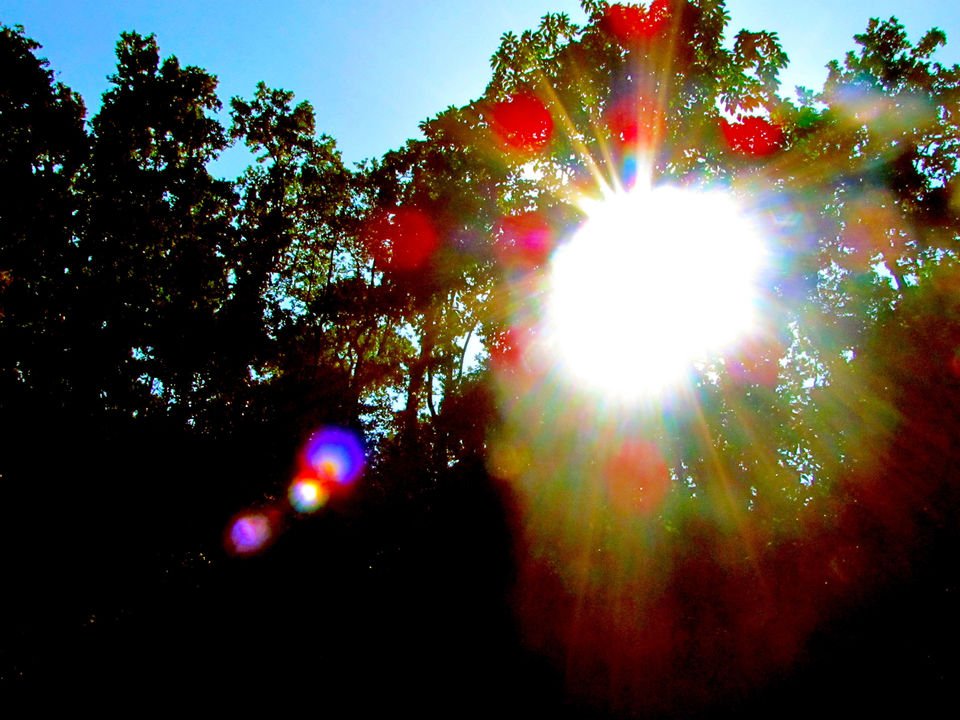 Walking further, we reach a village, the locals are amazing.. friendly and joyous. All cut from the busy city life, they have a taste of their own. We were not the invited guests, still welcomed as the most special. The children posed for the fun, the elderly offered a meal and the authenticity tasted awesome. 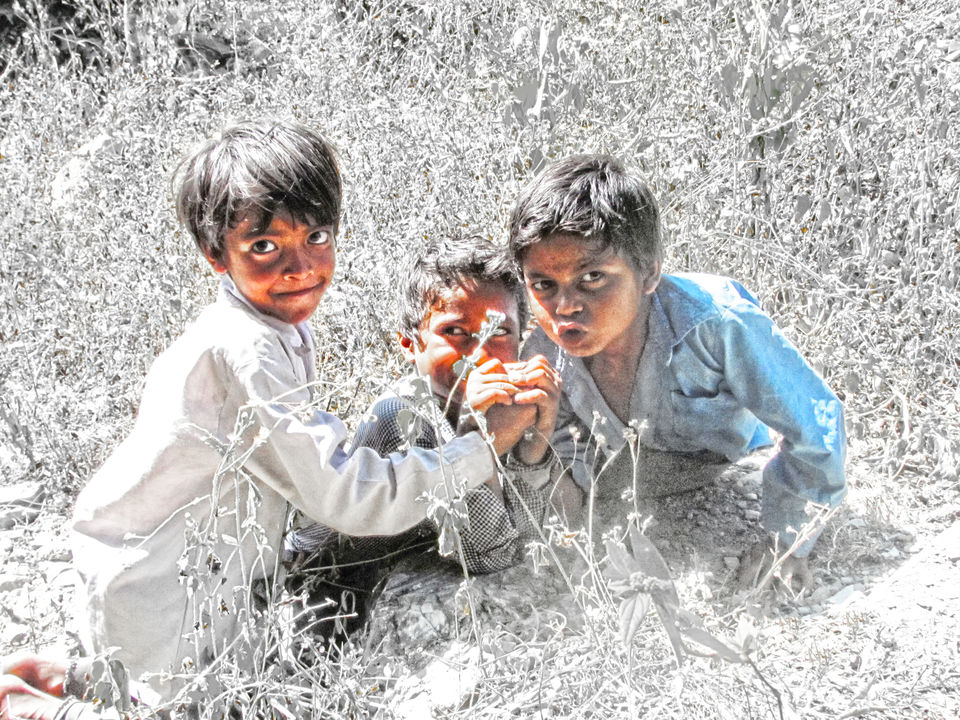 After the fun, joy and the tasty delight, we walk down back towards our resort. Just next to the resort, a walk down is another river adding to the natural entities. It too is beside a village, but not so populated. We see some people, but less. The river can be touched down only from the shore on the other side, to reach that we cross a bridge- looks scary, but not a worry at all!

The place is beautiful, people come to work, do fishing, enjoy and relax! 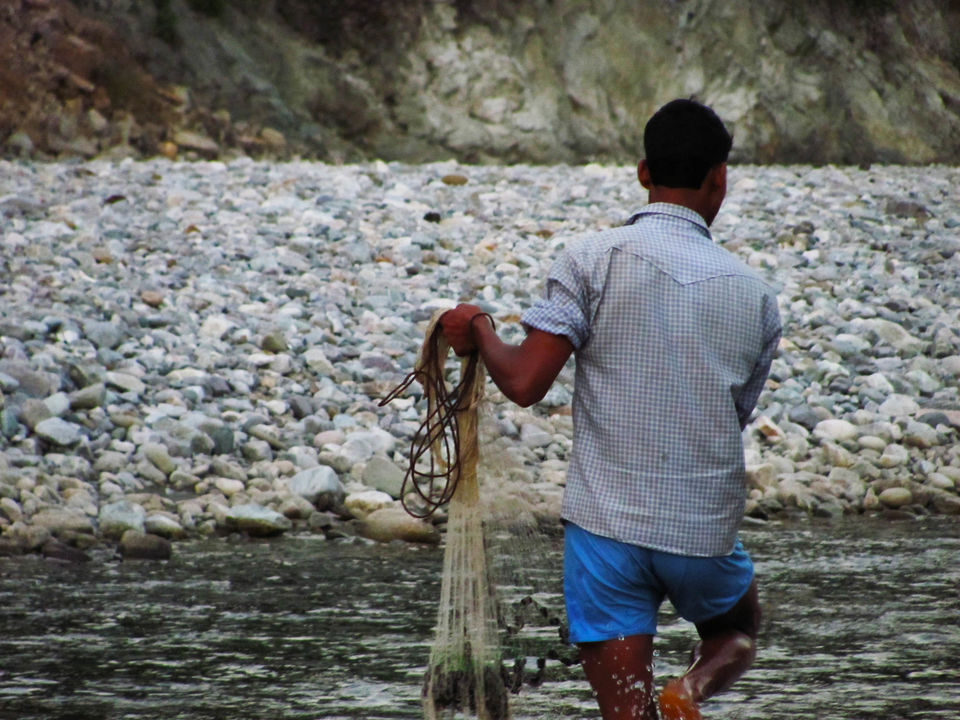 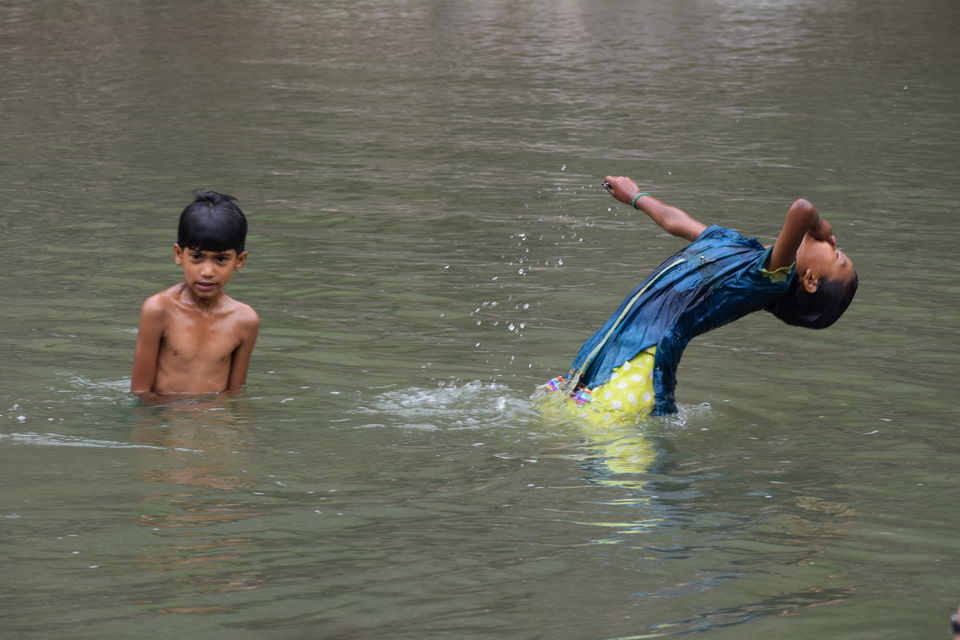 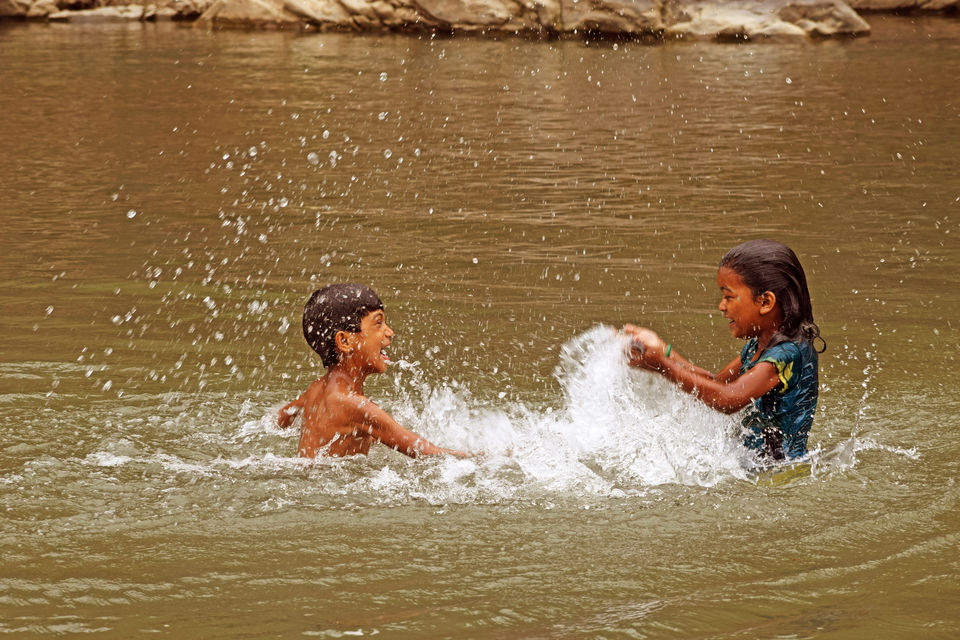 The river remains beautiful, but we have to give an end to it, as the sun sets, the rivers wait for their friends, the real inhabitants of the jungle and we move back to our cages. The roads grow dark and we don't see street lights. The torch we have in our phones is the only source of light on our way back, and we reach back. 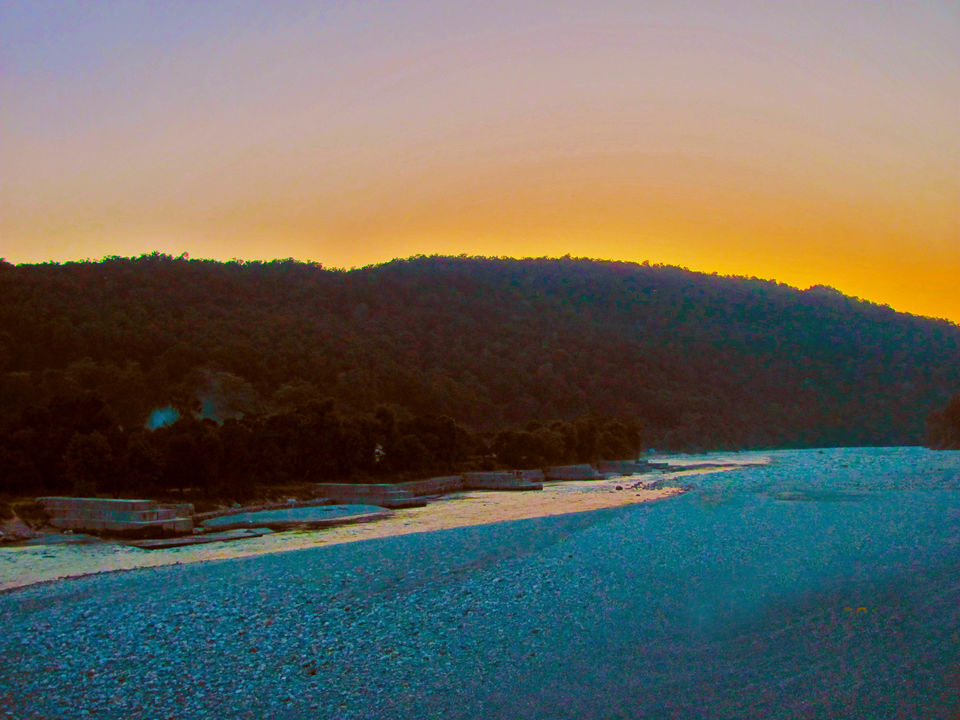 Some fun, some dance and the dinner leads to the day end awaiting for some more to some the next day.

The morning rises and we pack up back to home. A short but interesting was the trip, but had to end up soon. We were given our see off greetings by the locals in their own way and we drove back to the station, taking the train back to home. The train was a only a six coach train with all only for women and physically challenged, where we managed somehow. The train departs at 9.50 and reaches Delhi at 15.25, a decent time to travel unreserved. 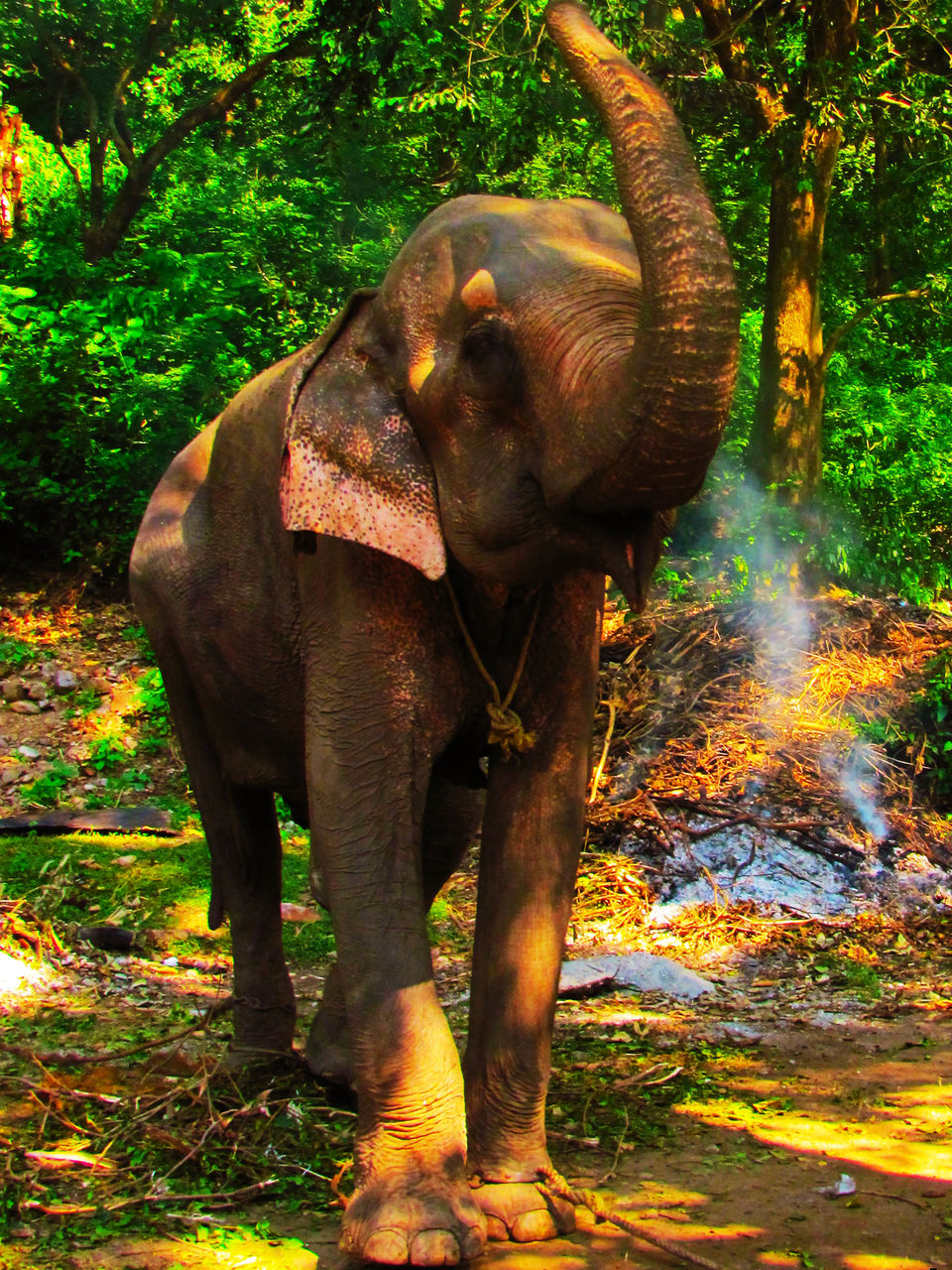 A short amazing trip. Other than trains, it can be reached by road, from Delhi its a drive of 5 hours, decently good roads and a comfortable drive, advised to cross Delhi borders before 7 AM.