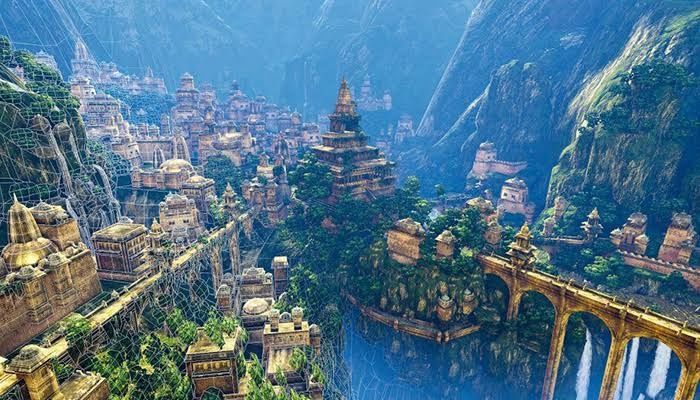 Earth is a fascinating planet, and we humans are an interesting breed. We create tales and myths to keep our faith alive, one such tale is of a mysterious land of undying - Gyanganj.

Gyanganj or Shambhala (For Tibetans) is a mystical land somewhere deep in a secret valley of Himalayas, around Kailash Parbat. (For those of you who do not know, Kailash Parbat is the throne of Lord Shiva).

The legend of Gyanganj derives its reference from various ancient scripts and vedas, and is believed to be a revered land of immortal Yogis which cannot be tracked by modern satellites. Only profound Yogis can find this Kingdom, which is assumed to be in a different realm.

Surrounded with snow capped mountains, Gyanganj per the legend, has a tree of life standing at its center, which is believed to unite heaven and earth. Yogis residing there are responsible for nurturing all of mankind and other living beings of Earth.

If Tibetan Buddhists are to be believed, at the time of horrifying chaos in the world, the 25th ruler of this Kingdom will come into sight to delicately guide the planet to a better future.

Guru Saikaka, in a meeting held at Amrita Pritam's residence, revealed that he has been going to Gyanganj for spiritual teachings, a Yogi has been taking him to the land on a different reality.

When Dalai Lama was asked about Gyanganj, he explained that it is not a physical state and cannot be located by human beings and the only way to find this place is by a Karmic connection.

L.P Farrel was an army officer of Western Command. Although a British, Mr. Farrel was deeply interested in Indian Philosophy and Culture, which is why, he was presented with an opportunity to visit Gyanganj.

He has described his visit to Gyanganj - "The way to the place where I was directed to reach was very difficult, narrow and dangerous. I was not at all able to climb up by myself but I was constantly feeling that somebody was showing me the way and was providing me the energy to climb up. After a hard effort of three and a half hours I could climb up. It seemed difficult to go ahead due to heavy breathing and perspiration. So I sat down on a square stone, lying down on it to take some rest. Hardly two minutes had passed and the same voice awakened me. ‘Mr. Farrel! Now you put off your shoes and slowly climb down the stone and come to me. With these words in the ears, I looked around and saw that a saint, with very weak constitution but brilliant splendor on the forehead, was standing in front of me. Leave aside the acquaintance, I had never met or seen him earlier. Then how could he know my name? He was here, then how did his shadow reach in my tent in the night? There was no communication link like a radio or a microphone etc between us. Then how could his voice reach me? Several such questions arose in my mind. Putting a stop to the unending trail of questions the sadhu said-whatever you have heard and seen cannot be understood by ordinary human mind. For this purpose one has to do long sadhana and the practice of yoga, abandoning the worldly pleasures and attraction of the senses. There is a specific purpose for which you have been called here.”

Even though it sounds mystical and intriguing, our world, filled with hatred and negativity, could surely use some guidance from the immortal land of Gyanganj.