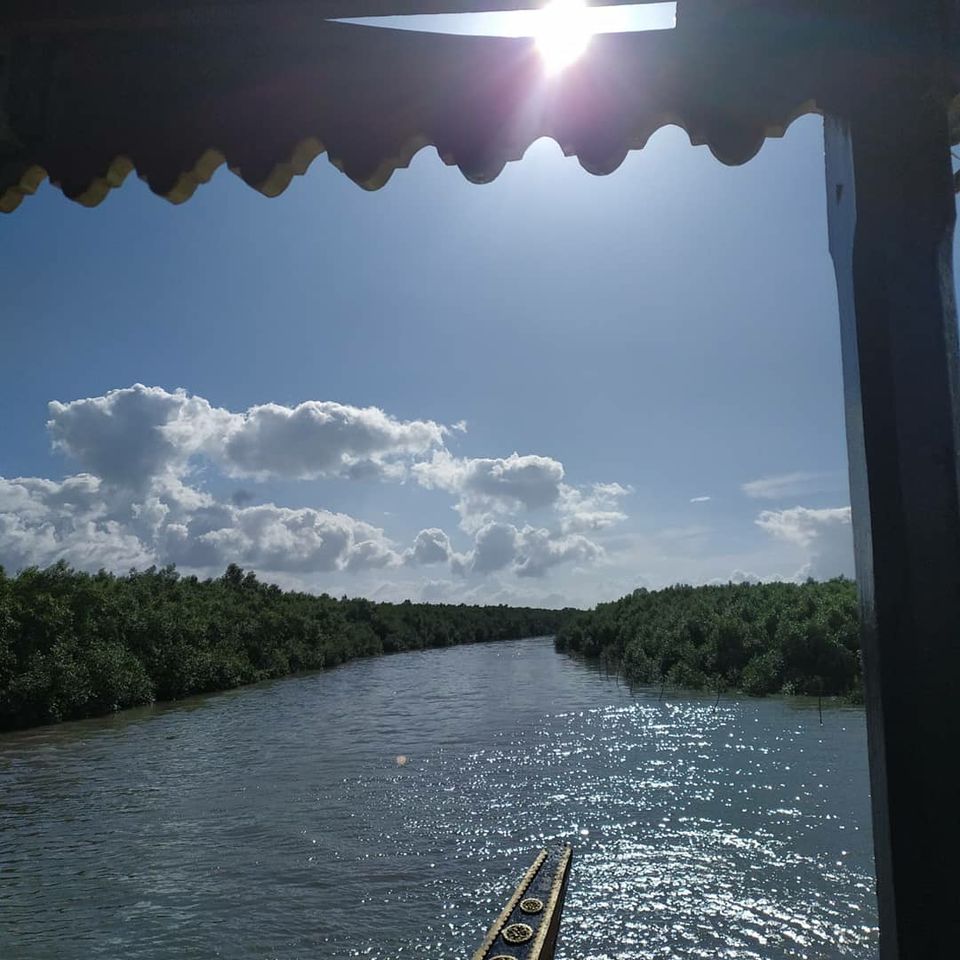 Always wondered about going solo on a trip. Put stories on Whatsapp, Facebook and Instagram...asking friends and people to join me on a trip to the Sunderbans: World's Largest Mangrove Forest. Well....after seeing disinterested faces....decided to go on my own...my very first solo trip!!

Total expense: Rs.3500 (including everything)

Being from Kolkata....started the trip from Sealdah Station. Boarded on a local train to Canning railway station. Took around an hour and 10 minutes to reach.
From the station, there are innumerable number of shared auto-rickshaws available. Reached the Canning ferry ghat within 20minutes or so.
The ride was amazing and so was the weather. So hopped in and thus, began the tour for the 6th Hilsa Festival at the Sunderbans.

First halt was at the Gosaba Village...
Places of interest: Beckon Bungalow and Hamilton Bungalow.

After the lunch, the other co-passengers were fropped off at an island called Pakhiralay, where they stayed at their hotel rooms. I, on the other hand, decided to stay in the boat with the sailors.....in the cabin. However, my night turned into a nightmare.

After having my dinner, which was begun bhaja(roasted egglant) with special khichdi (hodge-podge) and hilsa fry....as i was going to sleep, i saw a cockroach. Yes, its embarassing. Yes, im phobic towards cockroaches. Yes, i could no longer sleep in the cabin.

I climbed up to the upper part of the boat....but, unfortunately, tourists arent allowed to sleep there. It was the rule!! I begged them...explained it to them that rats, snakes, lizards dont matter to me but cockroaches. They laughed and remained adamant. So, i took a chair and sat and fell asleep. Now, you see, if you've worked nught shifts in the IT Sector, you become a pro in this. So was I. After an hour or so, they woke me up and allowed me to sleep beside them but warned me about the heavy showers at night in the middle of the river. I fell fast asleep....no signs of cockroaches there...it was peaceful. The calm sea...the beautiful moonlight.
While i was sleeping, suddenly i felt heavy showers poring and the next moment.....the wind brought them towards us and for 15 minutes or so....it continued. Well, they didnt seem to get much affected and thats what i learnt from them. I turned, crouched and fell asleep once again. It was cold. Really cold. But sleep was important. The showers were irregular and most probably continued whole night..... 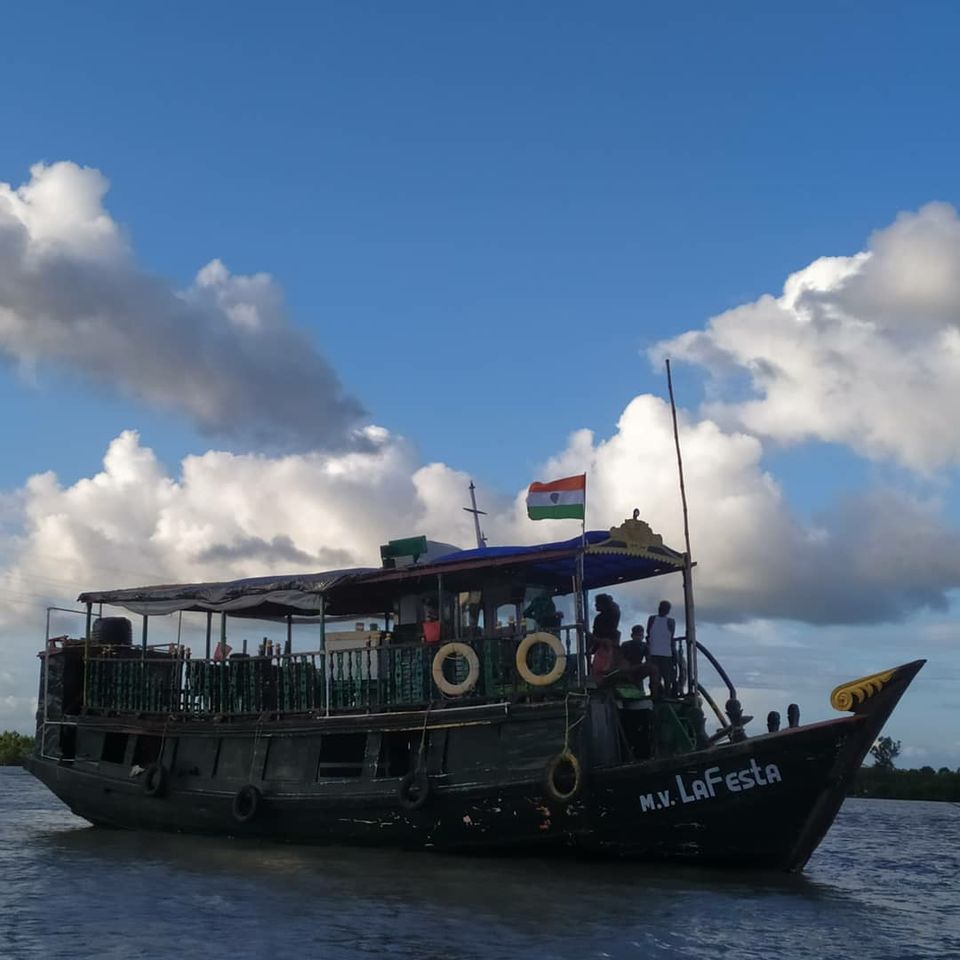 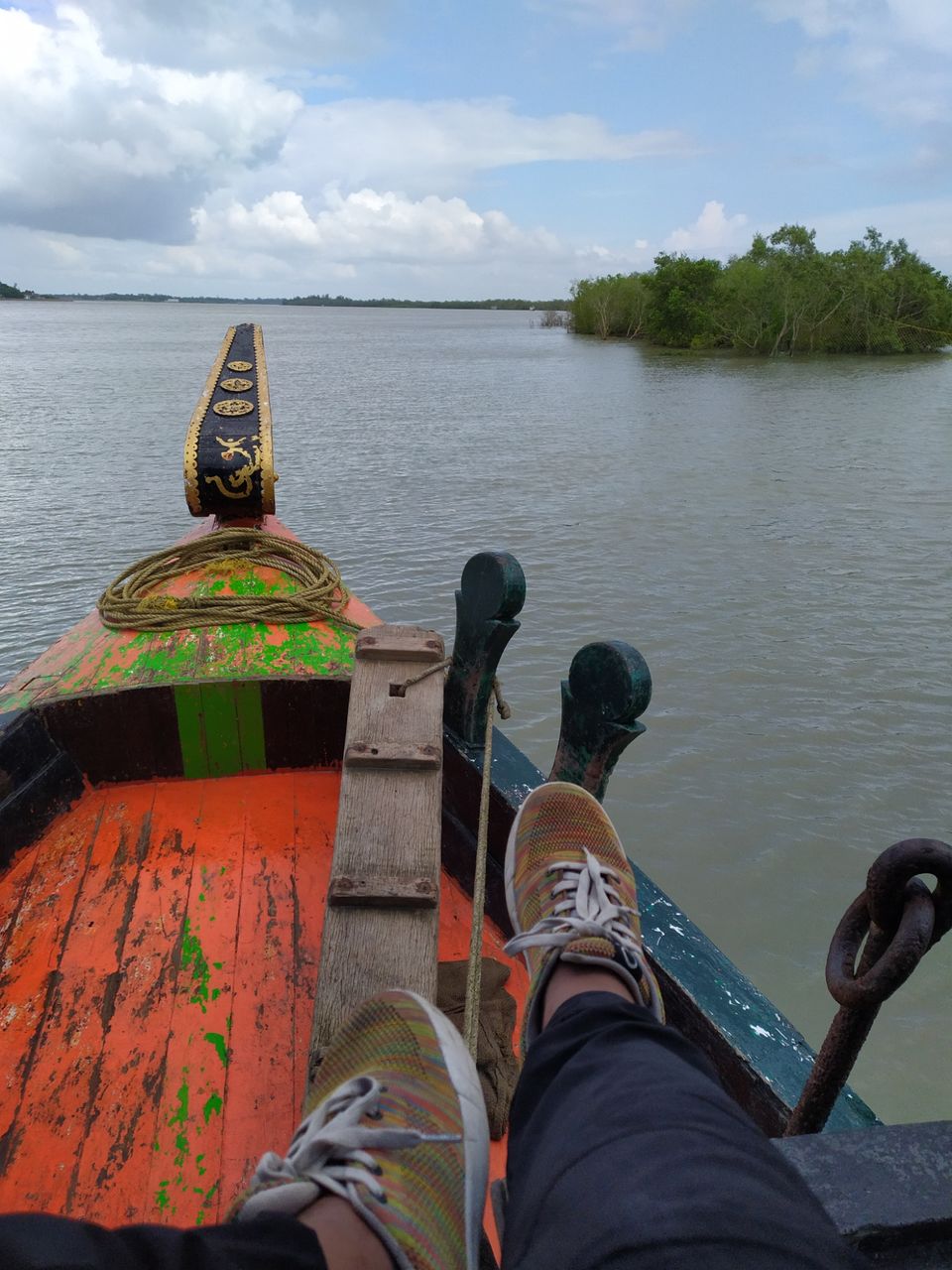 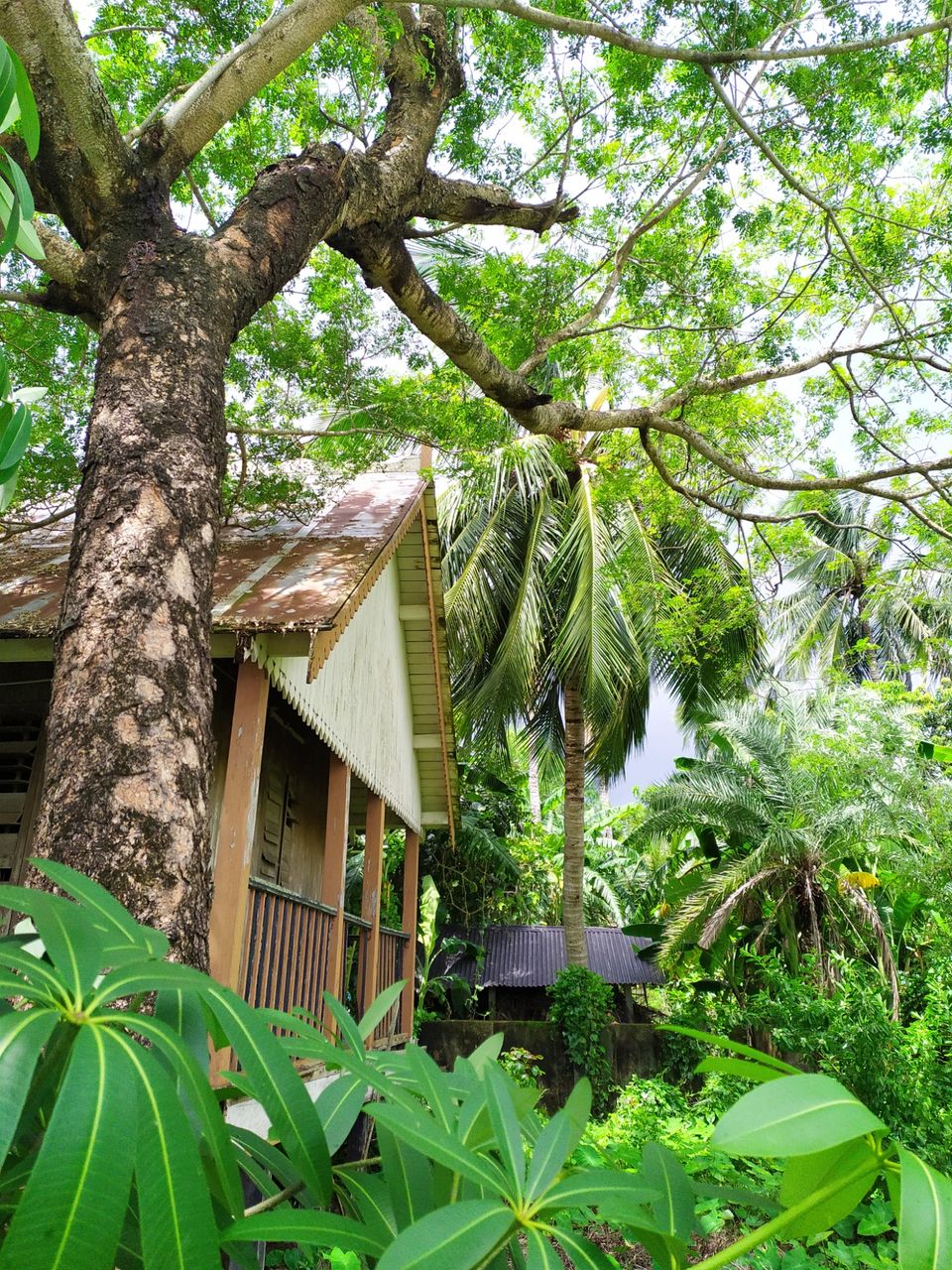 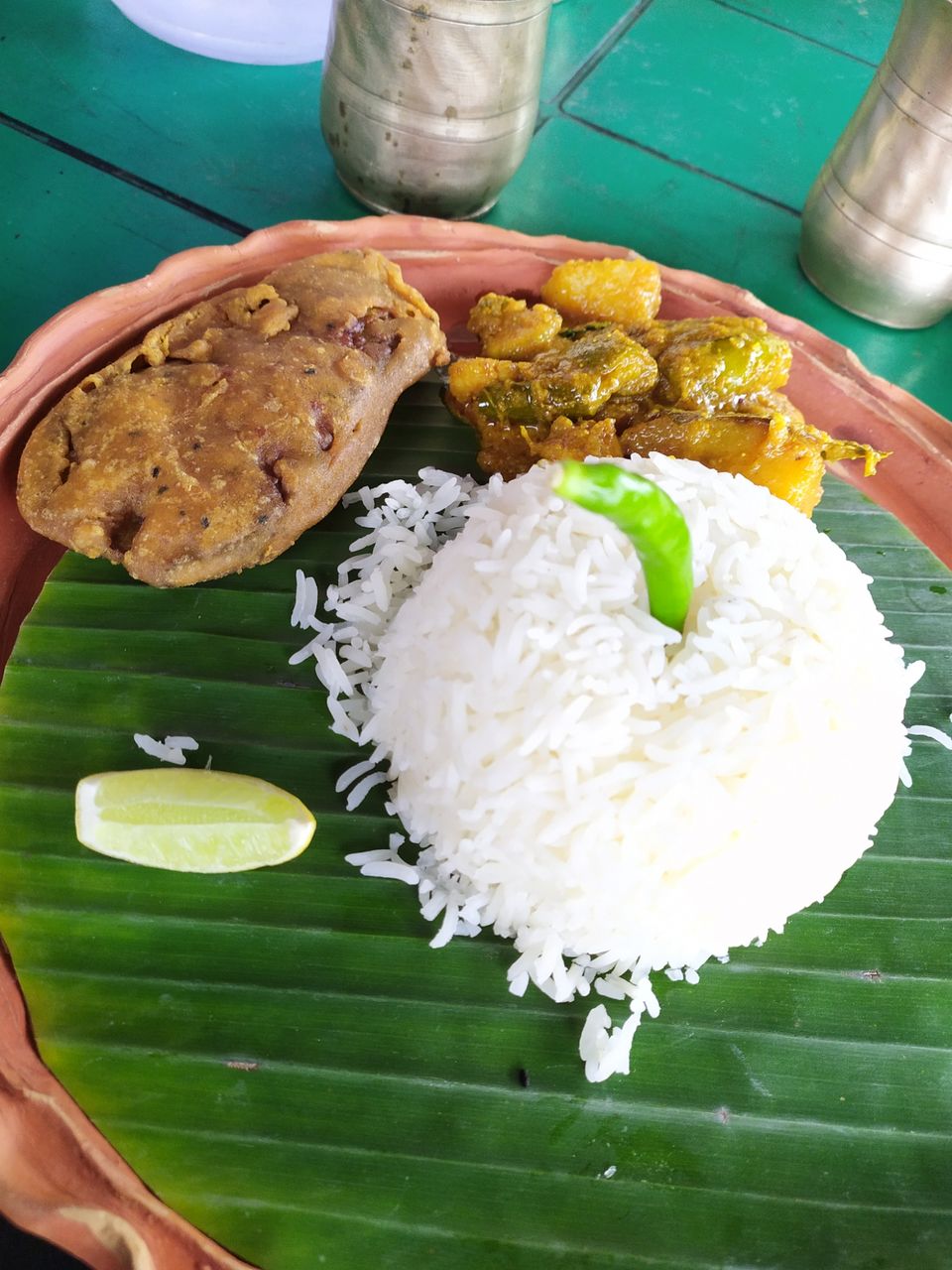 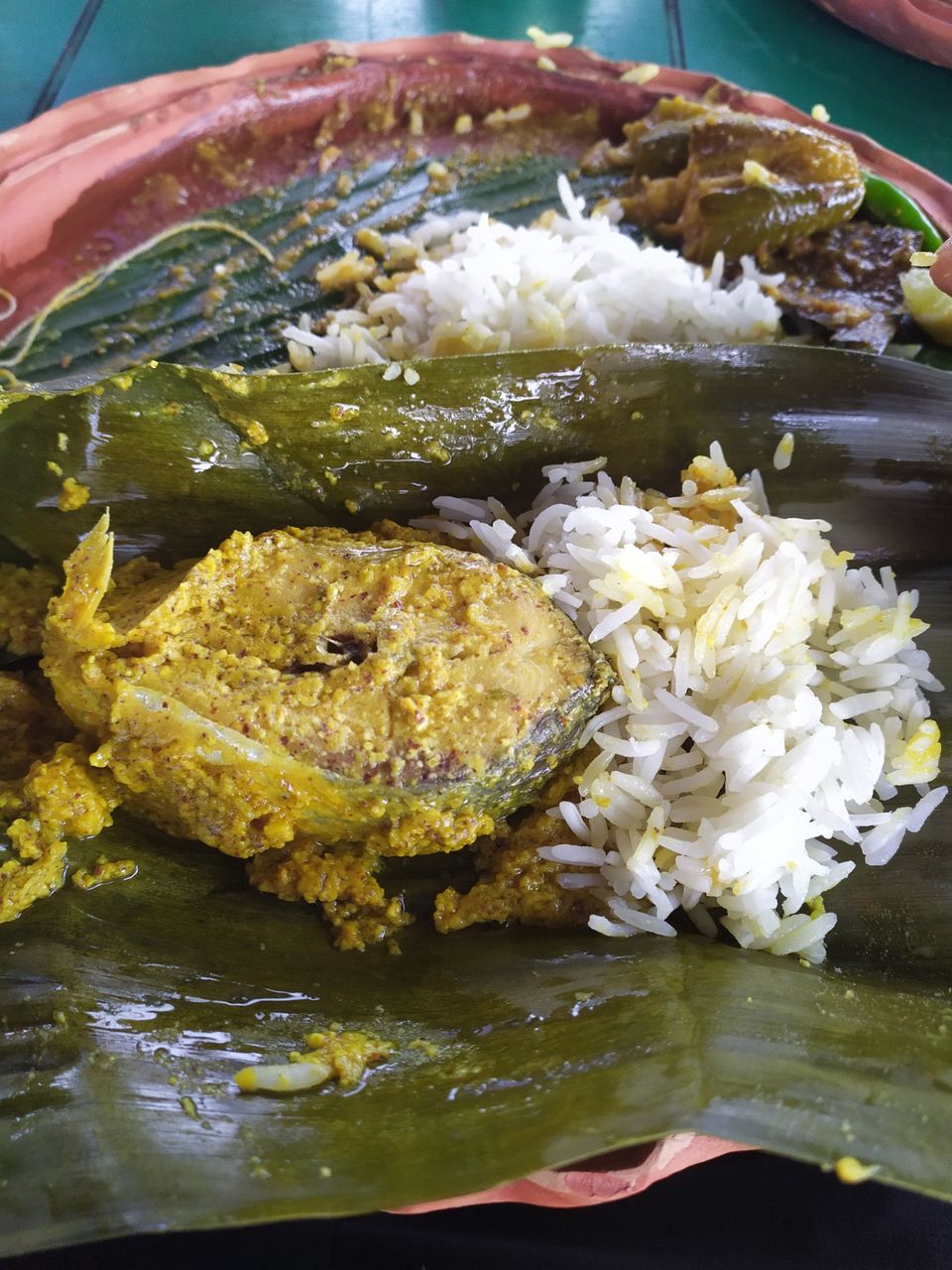 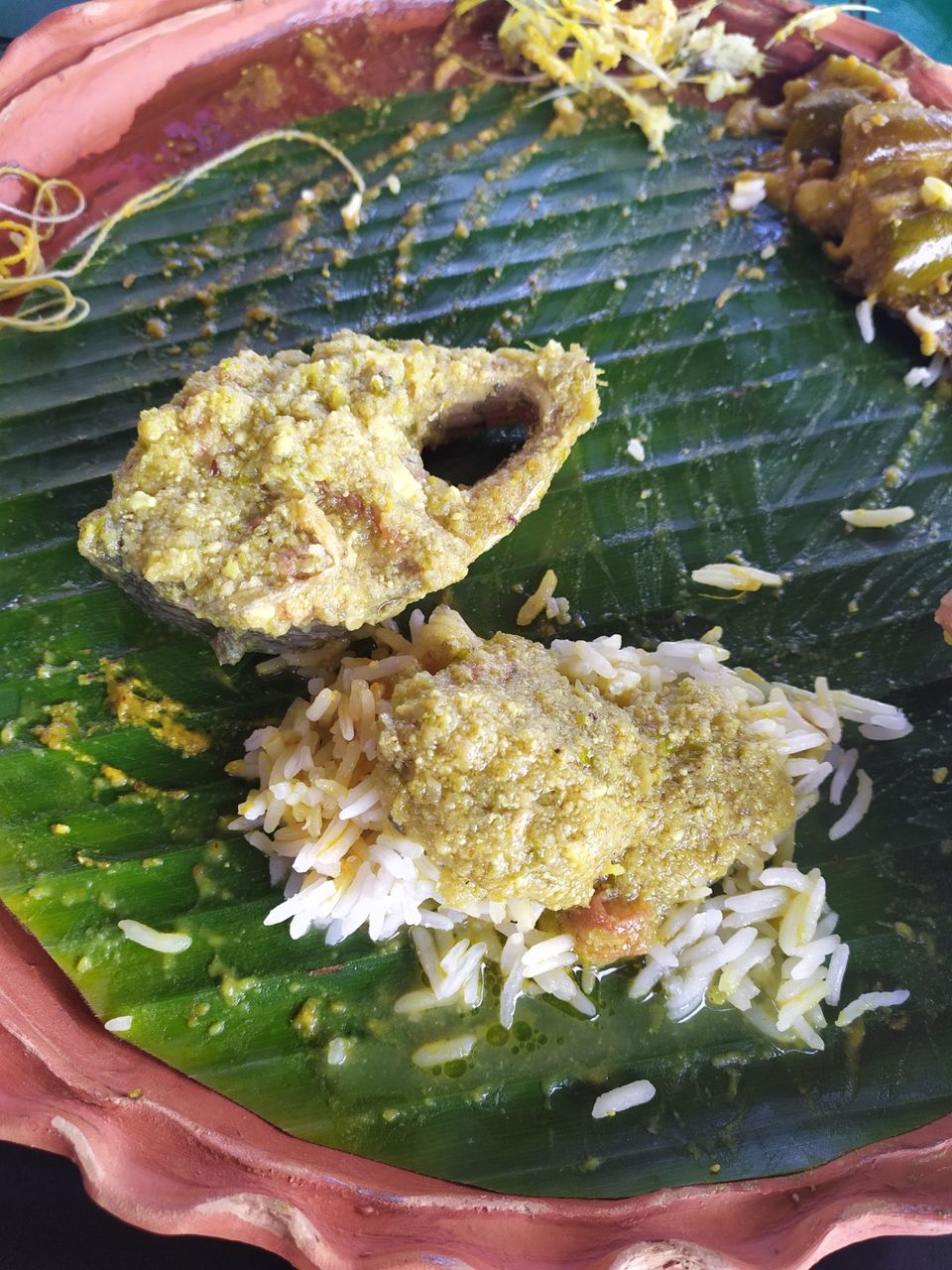 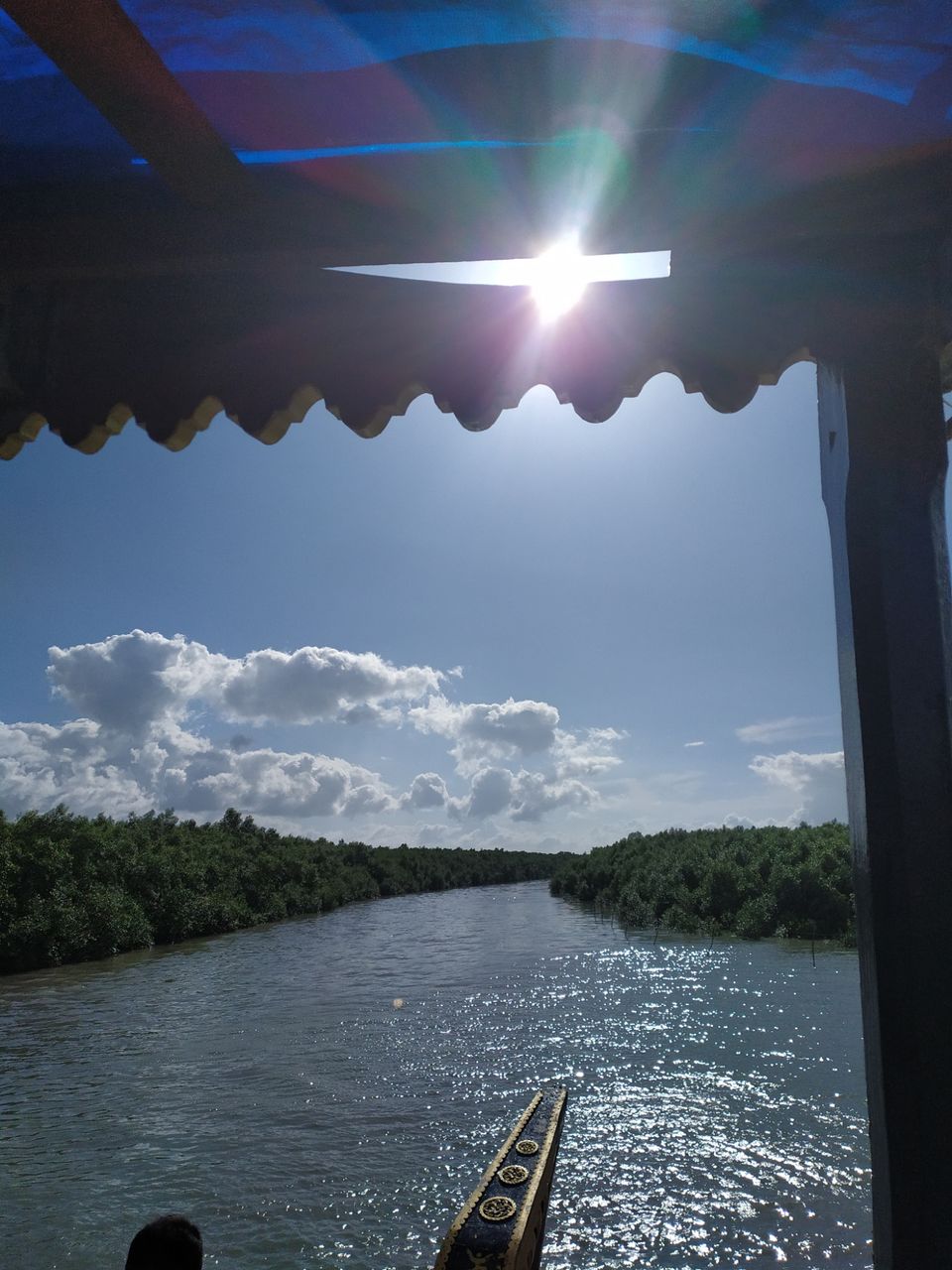 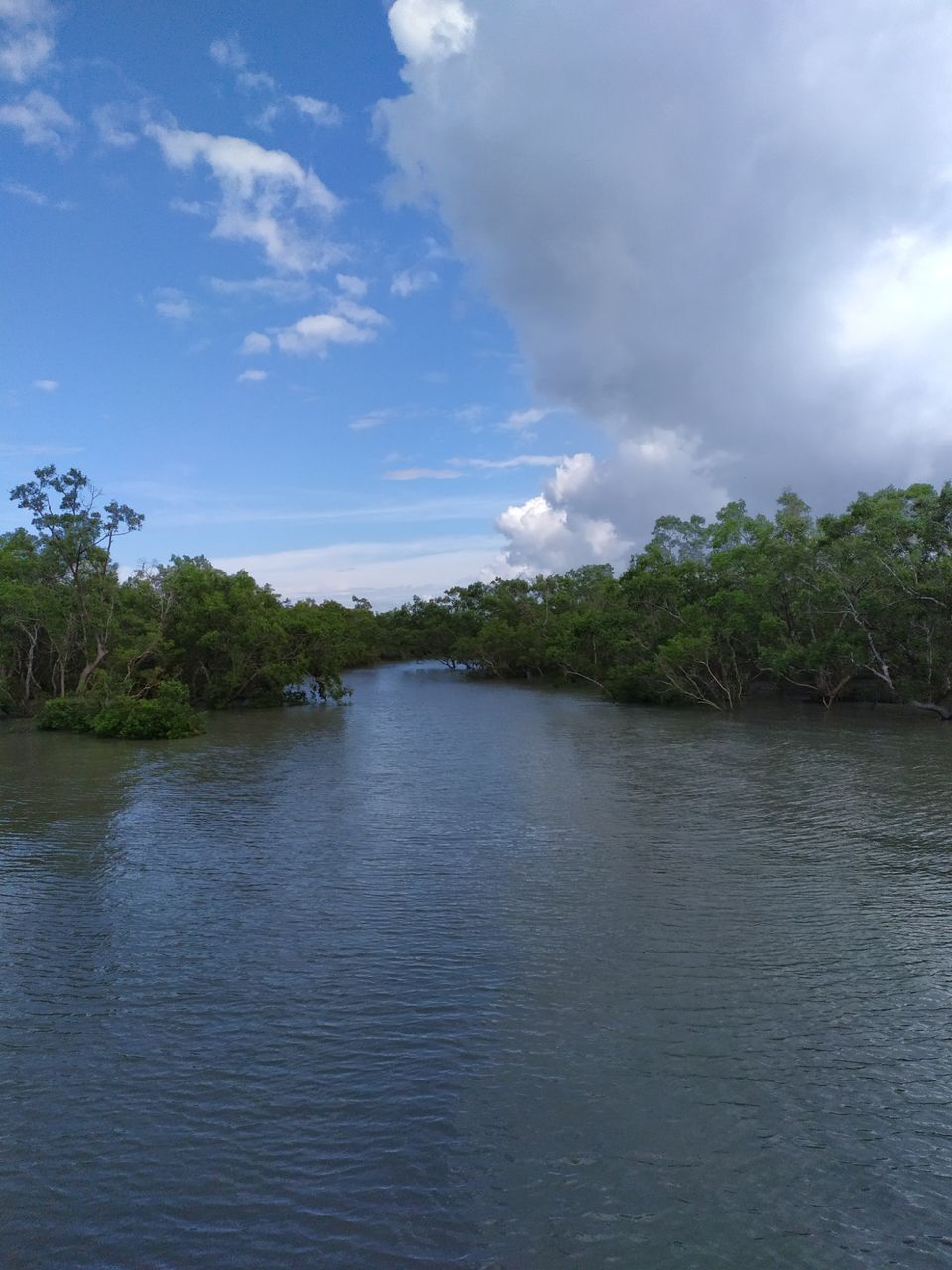 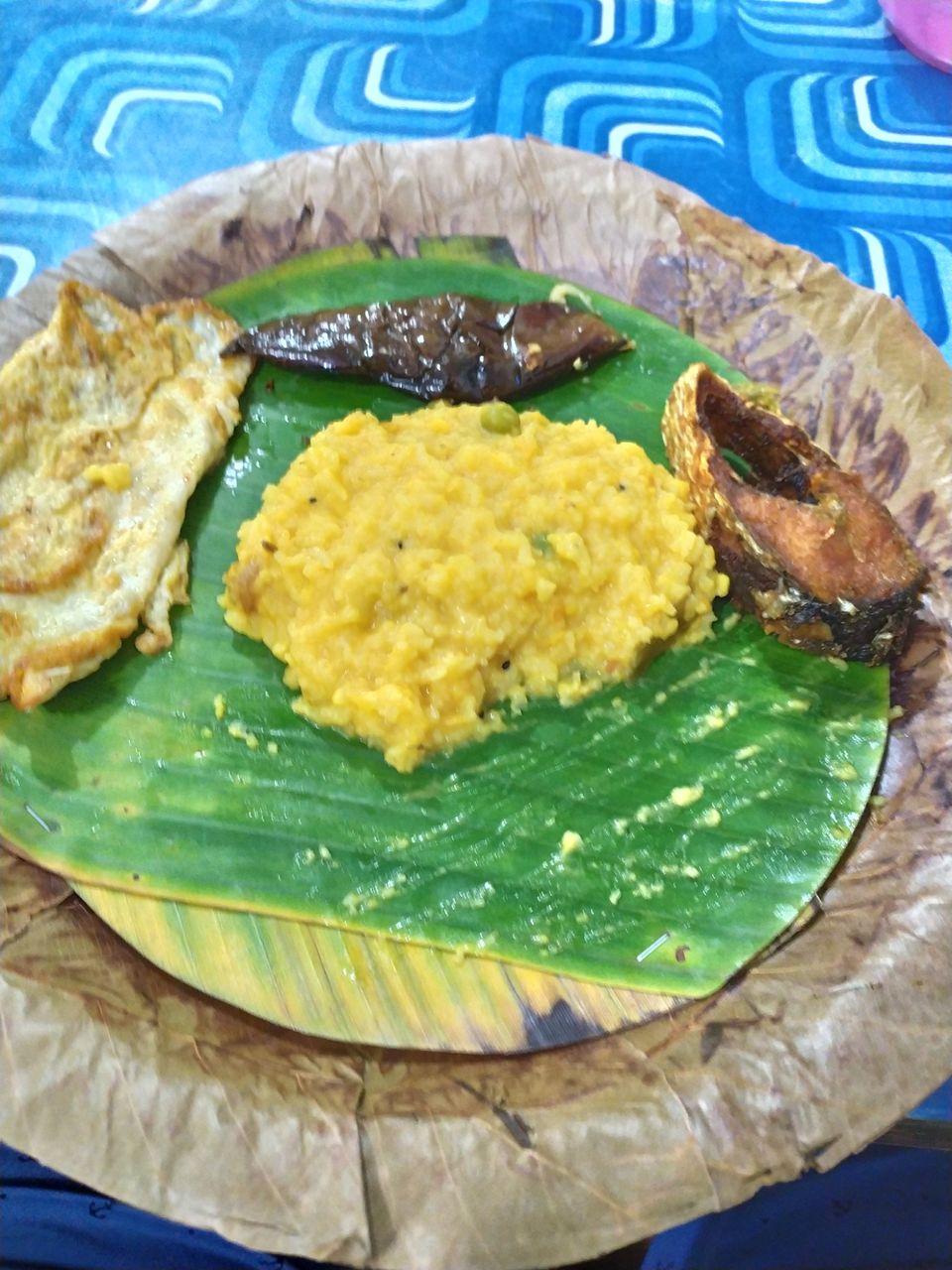 View from the boat

View from the boat

Woke up early around 5:40 am as the boat started moving to pick up the other tourists from their hotel rooms, had tea....washed my face and started the journey for the Tiger and Bird Safari. Got our permits at Sajnekhali Tiger Reserve. Breakfasts were provided on the way.
It started raining all along the way and the weatger throughout was cloudy.

After 4 hours of wandering around and exploring a number of islands of Pirkhali which are divided into 5 sectors, we saw deer, stag, crocodiles, a number of beautiful birds and marks of tiger paws. Tigers were nowhere to be found.But i wasnt there for the tigers. The best part of the trip was about to come: the trip to the Pakhir jungle( forest of birds), in between the dense mangroves through the backwaters. Lunch was served.
Menu: Hilsa biryani with salad and hilsa korma, chutney, papad.

Enjoying the rain and the views were beholding. It was serene. The boat turned to a point of the meeting point of five rivers. And that was no less than heaven!

Once again after dropping the other tourists to their hotels, the boat arrived at around 5km distance from the port and anchored. Slept beside the sailors. Reason? Cockroach, ofcourse!! 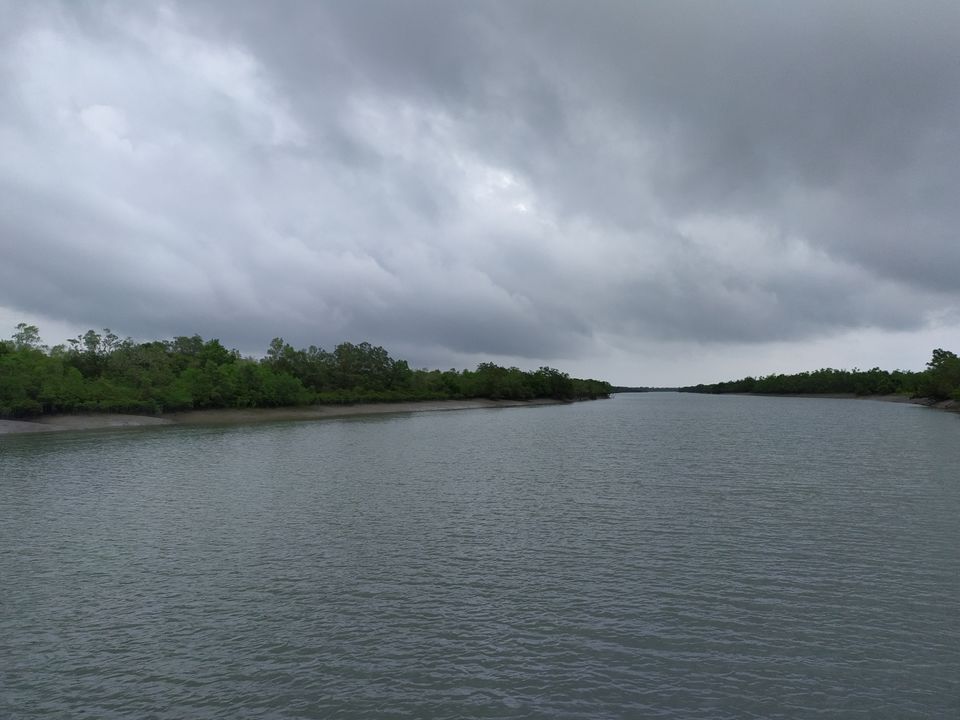 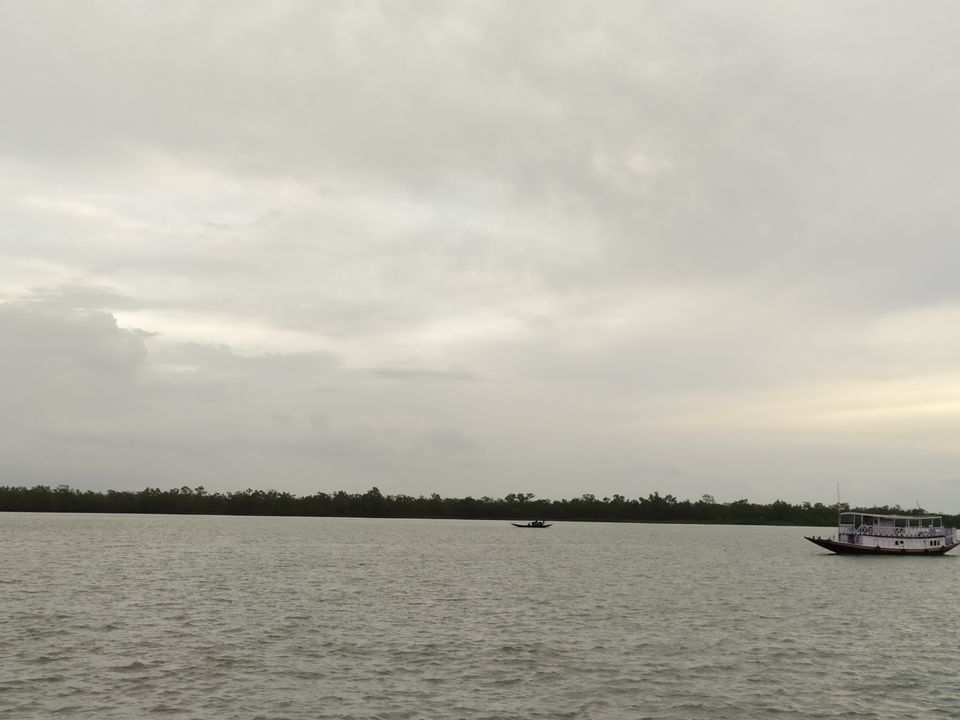 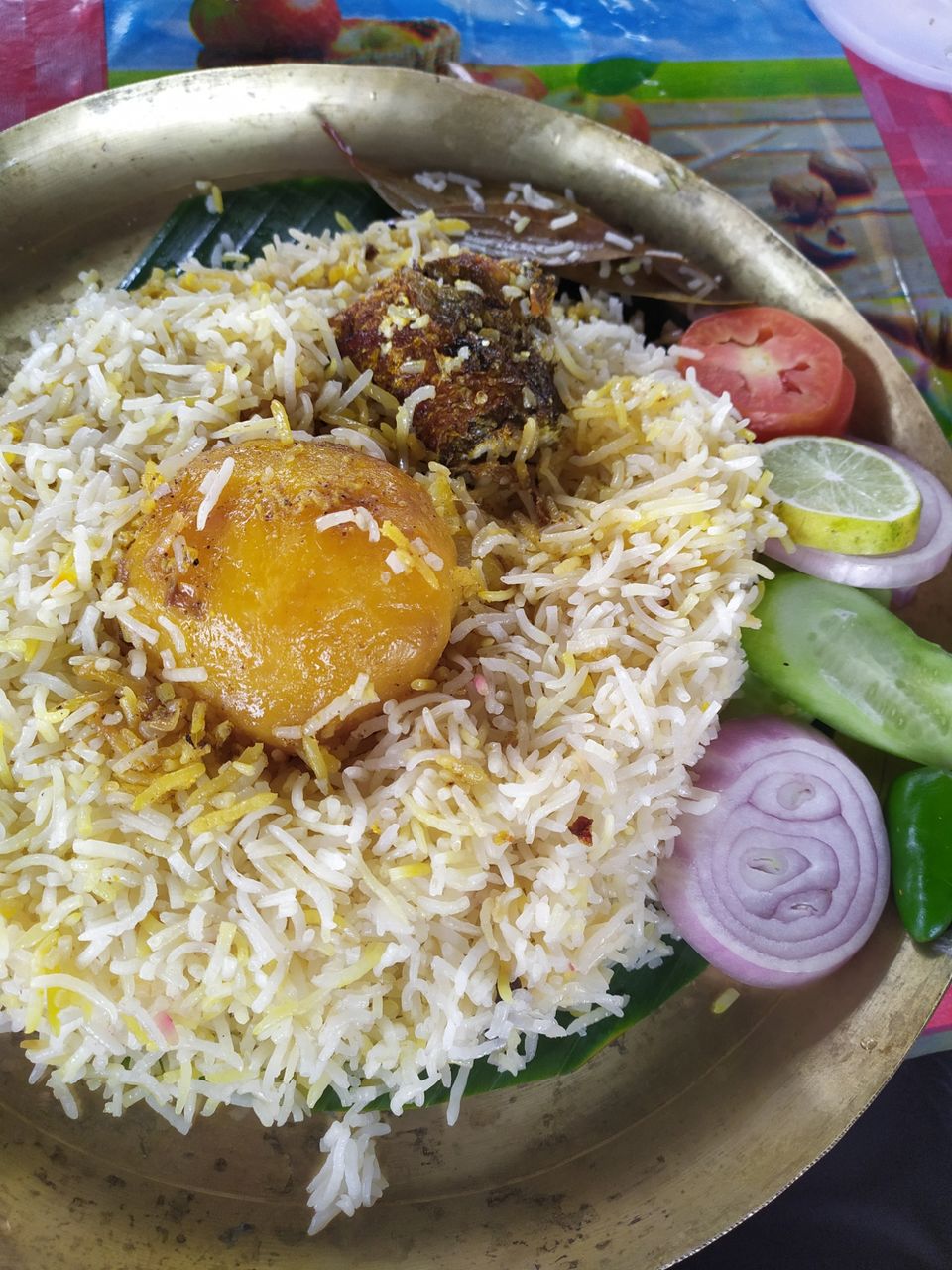 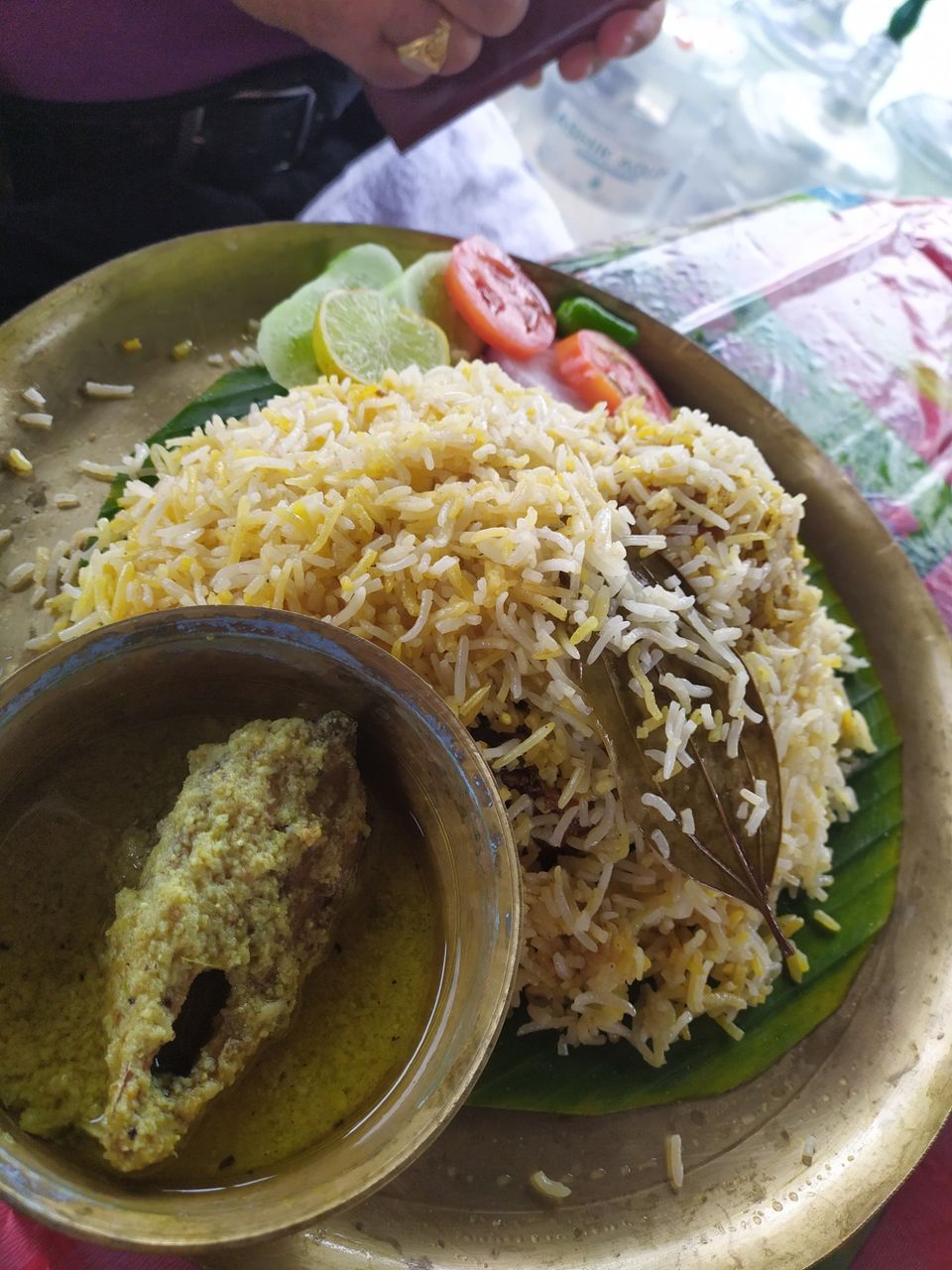 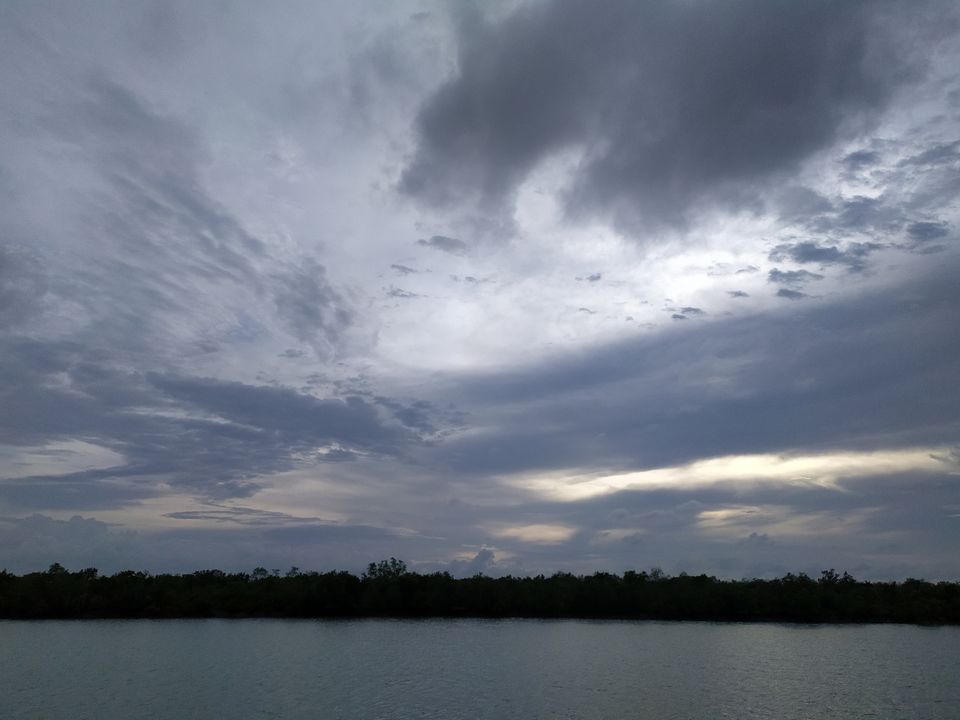 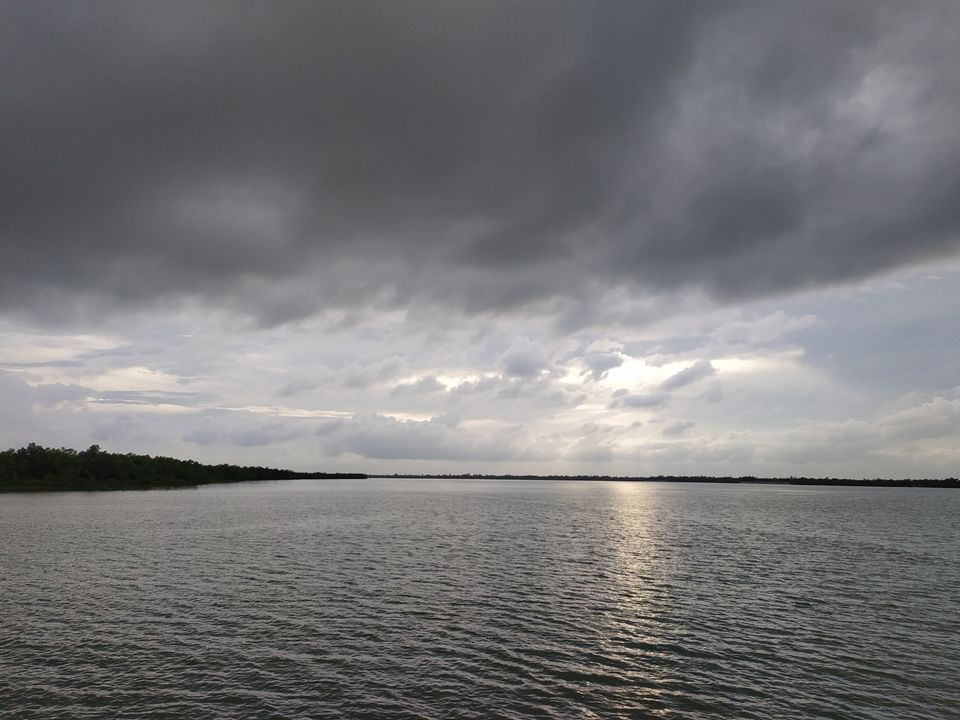 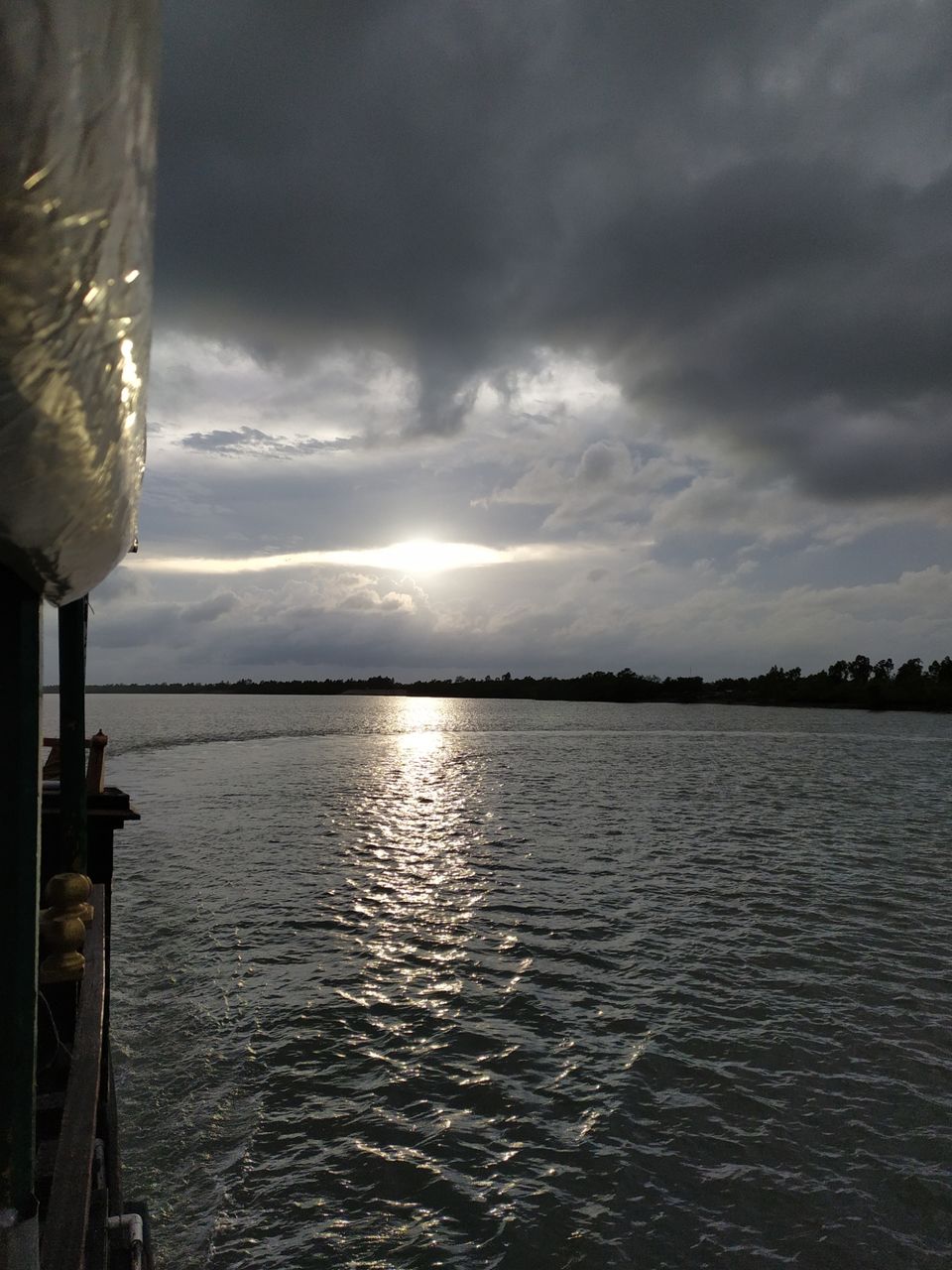 So the day finally came. The trip to Pakhir jungle. My main motive to come to this trip!! There were two smaller boats which were supposed to take us to the jungle. The first boat filled up fast. Luckily, there was place for only one more person. No one came forward as everyone was with their family or mate. And I, being the lucky one, got to step on to that boat....that too front row. The best view!!!! Whats are the odds of that!!!!
We started our sarari through the jungles. The mangroves were rich and dense. The mini boat often got stuck in to the thick branches. AND TRUST ME....THOSE WERE SOME BRANCHES!!!!! Got hit by quite a number of them.  We also had to constantly lower down our heads to pass under the branches. There were crabs climbing onto those and it was really cool. Will be posting videos of the tour soon.
After a while, one of the tourists, who had some experience in rowing a boat came forward with to sit upfront in order to swift the movement of the boat. We exited out through the jungle after a round tour through it. Honestly, i didnt want this safari to end. But like everything, this too came to an end.

Returned to our ride. Took deep breaths in and out...and returned home with the wilderness still engulfed in my mind. 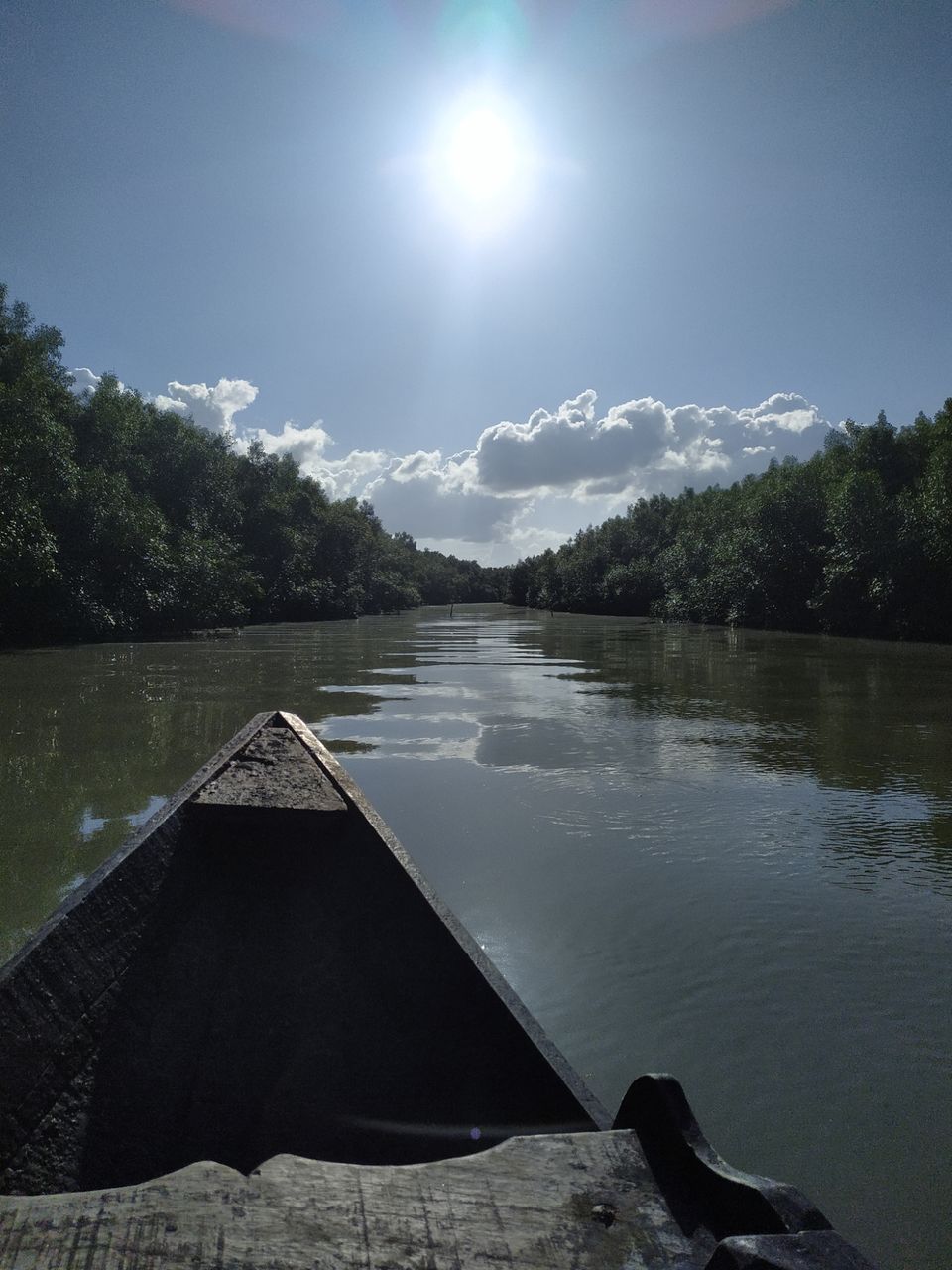 Into the wild: the magroves 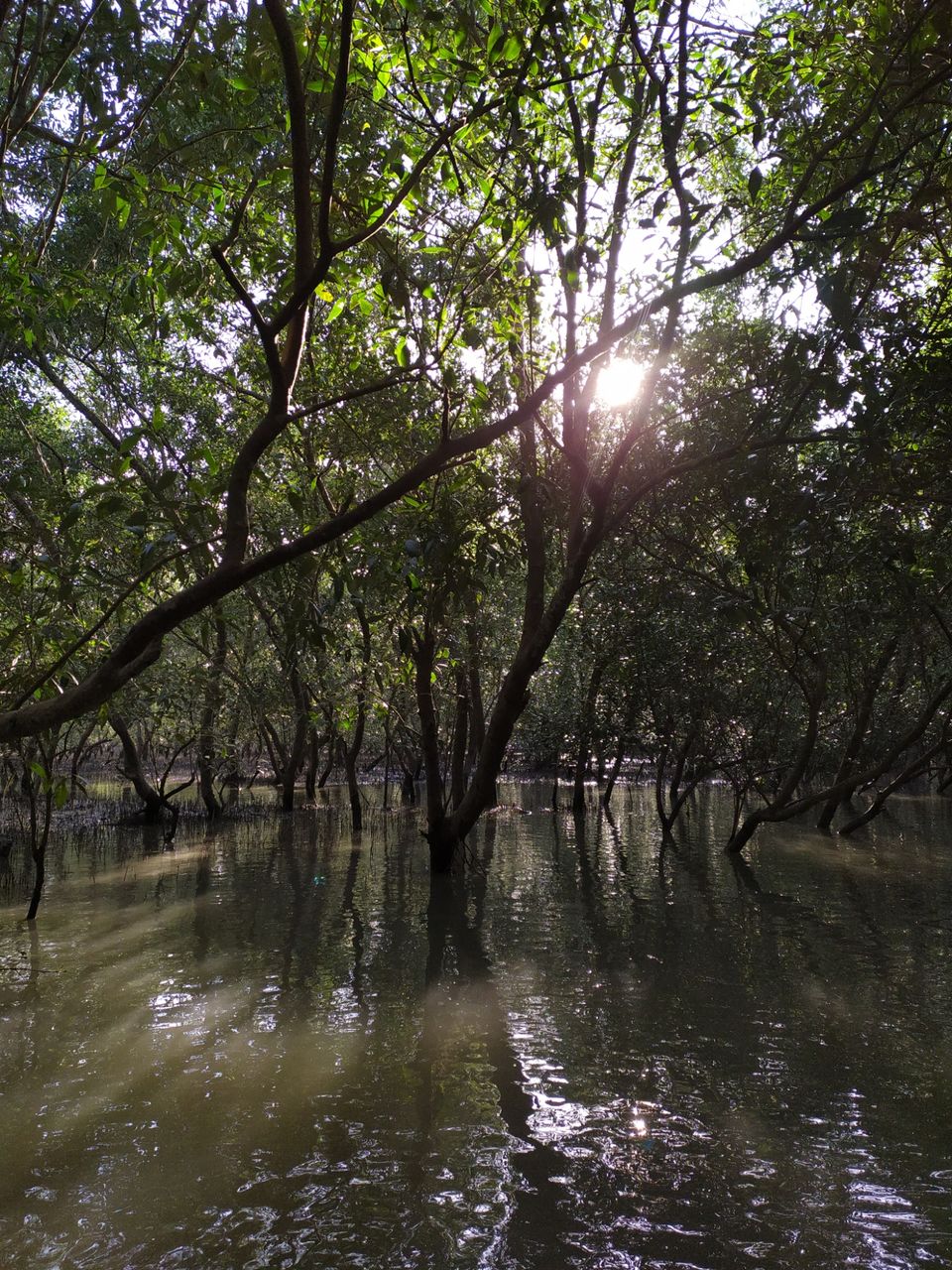 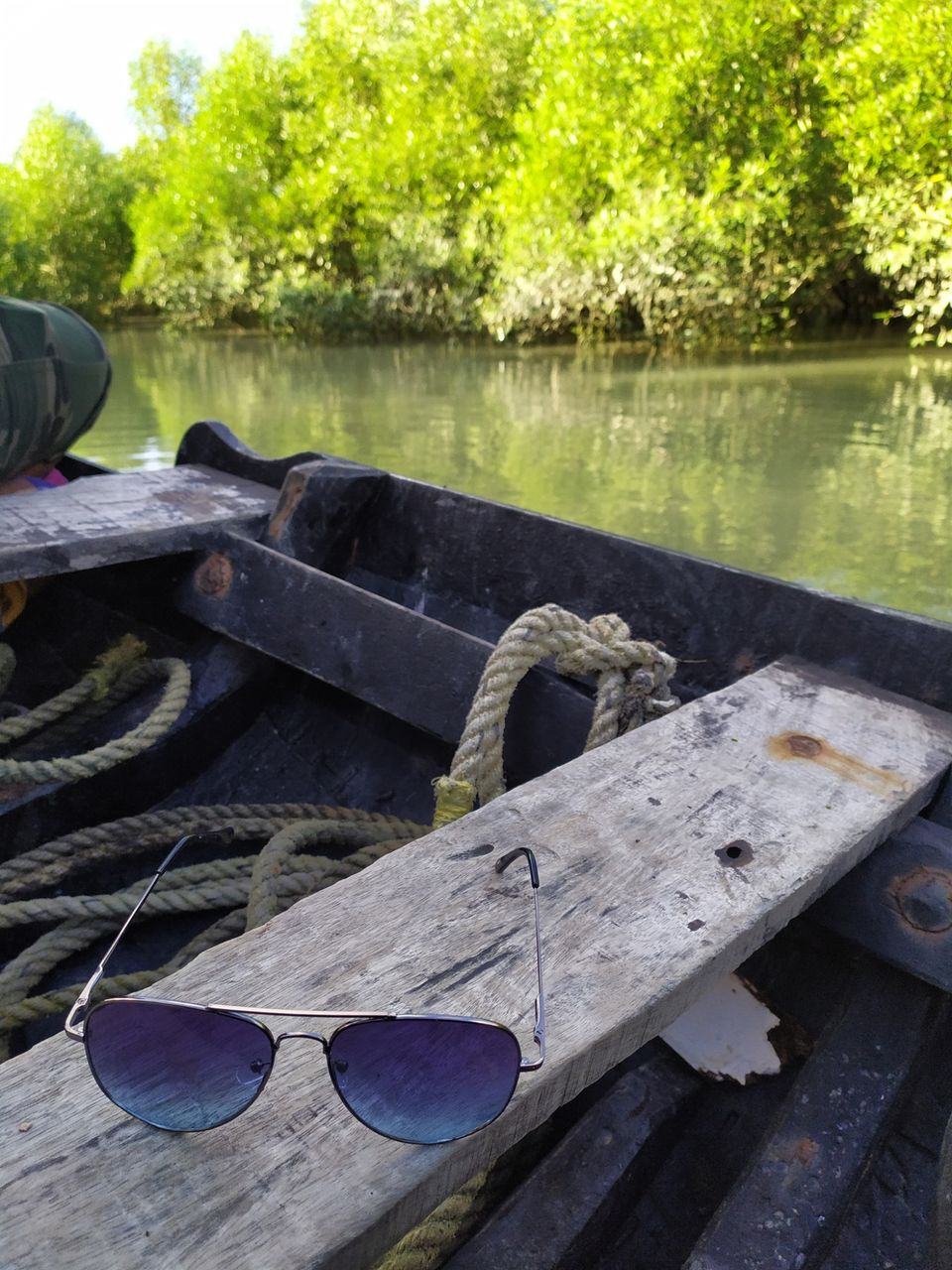 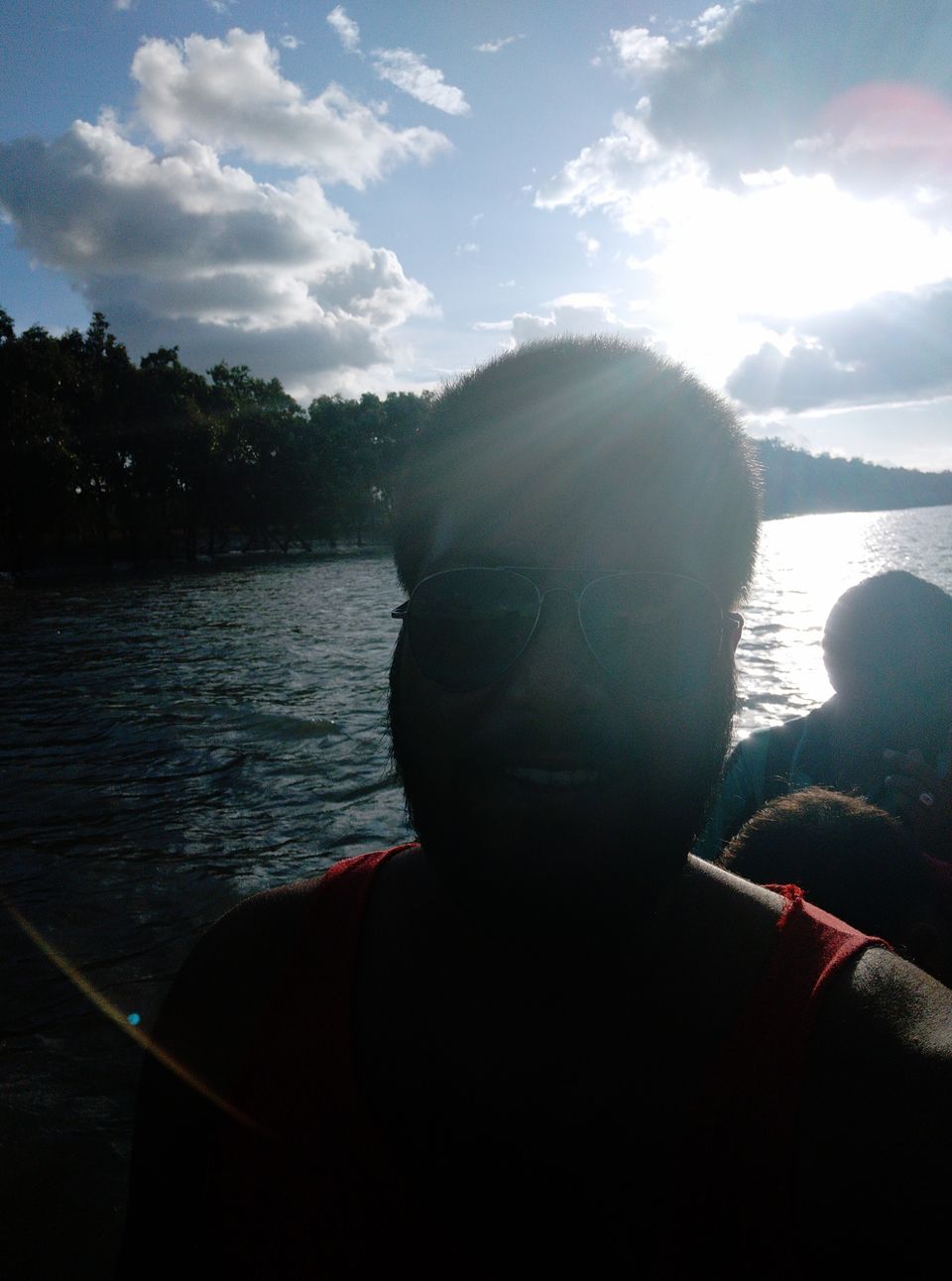 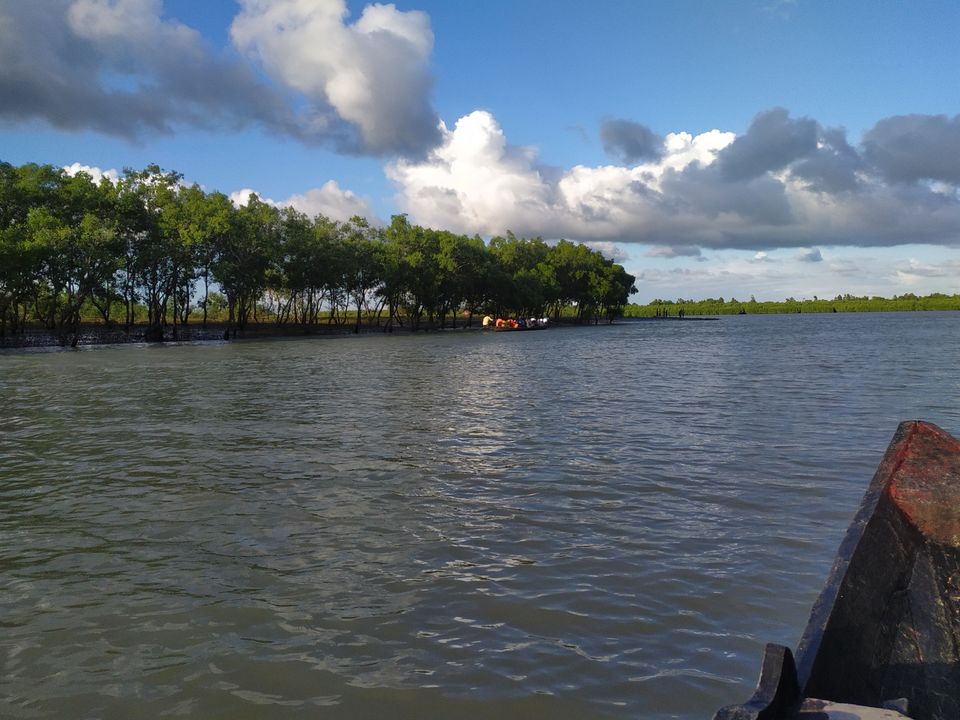 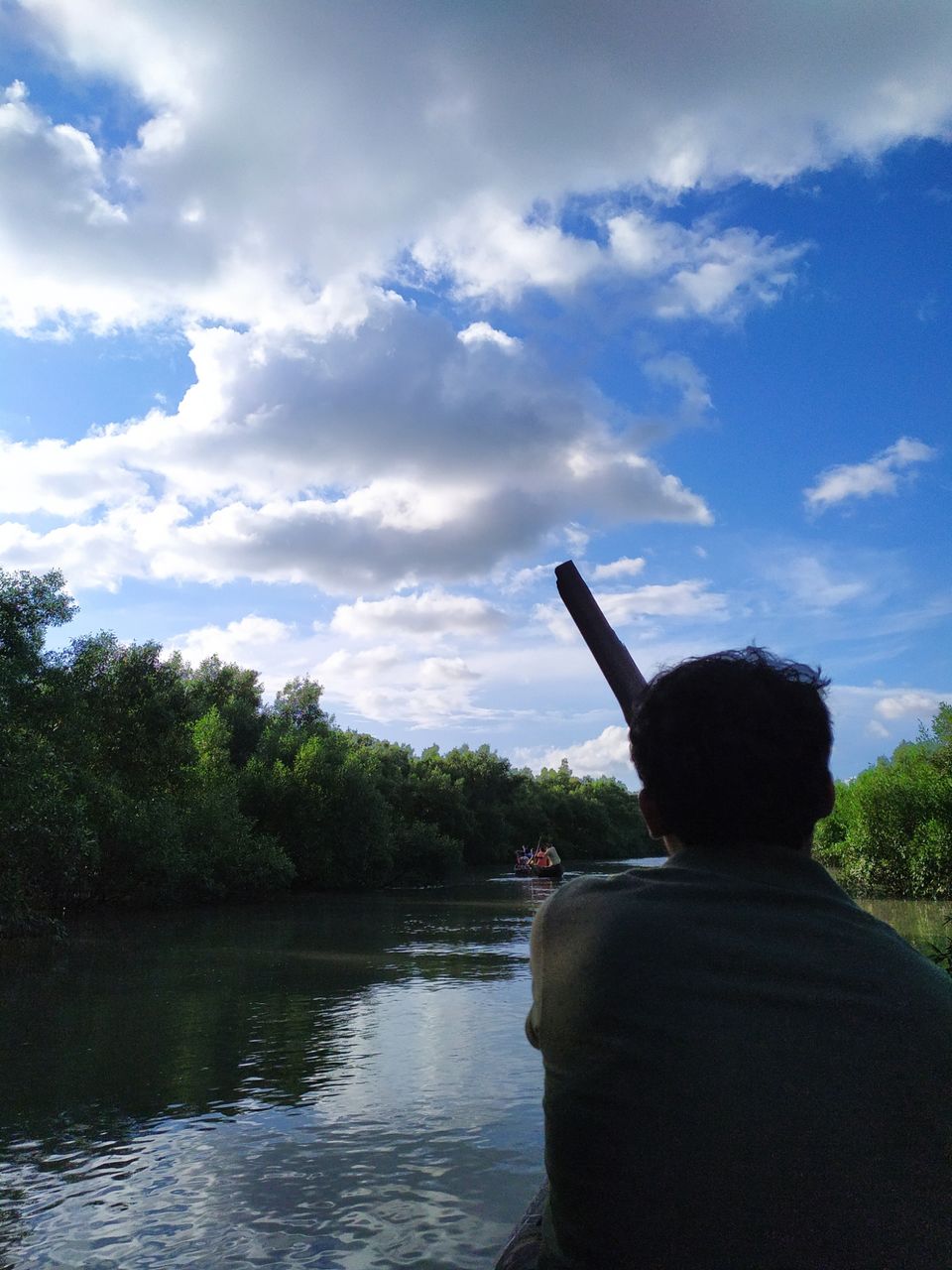