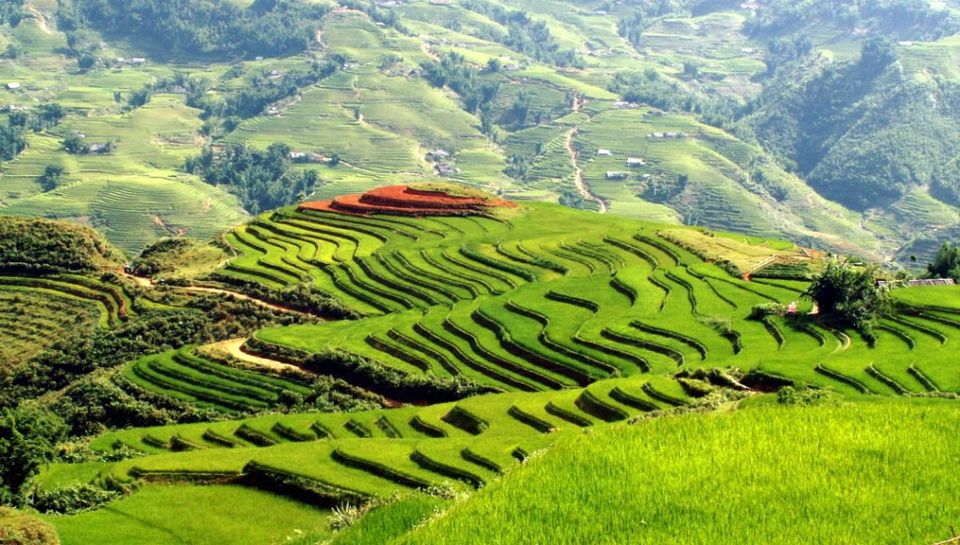 The Queen of the Mountains, Sapa sits regally overlooking a beautiful valley, lofty mountains towering over the town on all sides. Welcome to the destination in northwest Vietnam, gateway to another world of mysterious minority cultures and luscious landscapes. The spectacular scenery that surrounds Sapa includes cascading rice terraces that spill down the mountains like a patchwork quilt. The four springs clouded town, the prototype of many paintings has won international awards. Beyond the terraced fields is the golden harvest; on the left, Ban Ho as a mirror of the sun, dark red in the noon.

Located in Vietnam’s remote North West Mountains, Sapa is famous for both its fine, rugged scenery and also its rich cultural diversity. Its lush, deep river valleys, in the shadows of Vietnam’s tallest peak Mount Fansipan, are home to Blue H’mong and Red Dao communities, who continue to maintain their strong traditions and warmly welcome visitors to their homes.

Despite its commercialization during the last seven years, Sapa is still a must-see on any northern Vietnam itinerary. On a clear day you will treated to views of steeply terraced rice fields, towering verdant ridgelines, primitive mud-thatched villages, raging rivers and astounding waterfalls.

The climate of Hoang Lien Nature Reserve is unique to Vietnam. It is highly seasonal, with a subtropical climate in the summer and a temperate climate during the winter. Mean annual temperature for Sapa town is 15.4°C, with a maximum of 29.4°C and a minimum of 1°C. The warmest months are July and August, and the coldest months are December and January. Snow falls in some years on the highest peaks.

In common with the rest of northern Vietnam, Hoang Lien Nature Reserve experiences a marked wet season from May to September, with the heaviest rainfall occurring in July and August. Mean annual rainfall is 2,763 mm, with a high of 4,023mm and a low of 2,064mm. Humidity ranges from 75 to 91 percent with a yearly mean of 86 percent.

Climate varies considerably within the nature reserve. The prevalent wind direction for most of the year is west to east, leading to cloud formation on the upper slopes of the Fansipan massif. These high-altitude areas are covered by cloud most days of the year and have very high humidity. Cloud also penetrates into the valleys but these areas are usually less humid than the mountain slopes. In the extreme east of the nature reserve, around Ban Ho village, mean temperatures are considerably higher due to the lower altitude of these areas.

The Hoang Lien Mountains lie at the southeastern extent of the Himalayan chain. The nature reserve is located on the northeast flank of these mountains and includes Vietnam’s highest peak, Fansipan, at 3,143 m. The lowest point is 380 m but most of the nature reserve lies above 1,000 m. The flanks of the mountains are very steep and many areas are almost inaccessible on foot. Between Fansipan Mountain and Sapa town, lies the Muong Hoa valley, which has been terraced for wet rice agriculture. This valley becomes wider towards the east of the nature reserve.

Nestled high in the Tonkinese Alps near the Chinese border, Sapa was built as a hill station during French colonial days, to serve as a respite from stifling Hanoi summers. These days, weekends are still the biggest draw in this crumbling hill-tribe center. Visitors from the capital flock to Sapa for a glimpse of the famed “Love Market,” a trek to local hill tribe villages, or an ascent of Vietnam’s highest peak, Fansipan.

Some eight ethnic groups inhabit Lao Cai province: H’mong, Dzao, Giay, Tay, Muong, Hao and Xa Pho. The most prominent in town are the Red Dzao, easily identified by the coin-dangling red headdresses and intricately embroidered waistcoats worn by the women, and the H’mong, distinguished by their somewhat less elaborately embroidered royal blue attire. Groups of ethnic H’mong youngsters and women can be seen hauling impossibly heavy, awkward baskets of wood, stakes, bamboo, bricks, mud and produce. Deep in the valleys surrounding Sapa, the Muong Hoa River sluices a wild, jagged course among Giay, Red Dzao and White Thai settlements, their tiny dwellings poking out of the neon rice fields like diamonds on a putting green. The Kinh (lowland Vietnamese) never originally colonised this highest of Việt Nam’s valleys, which lies in the shadow of Phan-Xi-Pǎng (Fansipan, 3143 meters), the highest peak in the country. One- to four-day treks are offered by a handful of outfitters. Guests sleep in tents or in the homes of villagers, their gear hauled by H’mong porters. Be warned: Despite what the local innkeepers will tell you, both the H’mong and the Dzao really do not enjoy having their photographs taken unless they’re paid for it. It’s a certainty that any brochure you see of smiling, care-free ethnic hill people was shot under a Screen Actors Guild contract.

It was only when the French debarked in highland Tonkin in the late 1880s that Sapa, or Chapa as the French called it, began to appear on the national map. In the following decade, the future site of Sapa town started to see military parties as well as missionaries from the Société des Missions Etrangères de Paris (MEP) visit. The French military marched from the Red River Delta into the northern mountainous regions as part of Tonkin’s ‘pacification’. In 1894-96 the border between China and Tonkin was formally agreed upon and the Sapa area, just to the south of this frontier, was placed under French authority. From 1891 the entire Lào Cai region, including Sapa, came under direct colonial military administration so as to curtail banditry and political resistance on the sensitive northern frontier.

The first permanent French civilian resident arrived in Sapa in 1909. With its attractive continental climate, health authorities believed the site had potential. By 1912 a military sanatorium for ailing officers had been erected along with a fully fledged military garrison. Then, from the 1920s onwards, several wealthy professionals with enough financial capital also had a number of private villas built in the vicinity.

Sapa is famed for its “Love Market” – sort of a cross between a peacock mating ritual, a Middle Eastern arms bazaar, an Amish square dance, a bad Pavarotti concert and Bangkok’s Patpong (except here the people wear clothes). On Saturday nights, Red Dzao hill tribe youths of both sexes congregate in a weekly courting rite, singing tribal versions of Loretta Lynn love songs to woo the opposite sex. The songs are highly personalized and boast of the composer’s physical attributes, domestic abilities and strong work ethic. While Dao women are indeed highly industrious, the men, it seems, prefer to spend most of their time drinking, smoking opium or sleeping, only occasionally slapping the rump of a lethargic bovine moving more slowly than they are. Few of their songs, though, are about drinking, smoking opium, sleeping or slapping rumps.

Topping out at 3,143 meters, Fansipan has become the Mount Everest of Vietnam, with queues of yuppie trekkers in their latest TravelSmith “totally-packable” rainwear forming mountaineering traffic jams at base camps. Footprint Travel can arrange guided ascents.

Sapa itself is a somewhat bedraggled village meshing crumbling, mildewed French colonial architecture with the pencil-thin, brick-and-concrete mini-hotels that have become so ubiquitous in recent years all across Vietnam. This neglected, cultural mishmash would be an eyesore in any place less spectacularly scenic than Sapa. Because of its Shangri-la-like setting, Sapa actually seems quaint – a tranquil, restful village. Which is, of course, what the French originally intended the place to be. Amenities are limited unless you choose to stay at the Four Star Victoria Sapa, a sprawling alpine campus nestled discreetly into a hillside in the center of town.

The best times of the year to visit Sapa are in the spring and fall. Summers tend to be rainy and muddy, while winter temperatures can drop to the freezing mark (Sapa ushered in 2000 with snow!). Weather really does make a difference here, because the spectacular scenery is all but blotted out when there is cloud cover and rain. Ignore the other Nikon-toting tourists in the villages and get out into the countryside, where you just may still catch a glimpse into hill-tribe life of a couple of centuries ago.