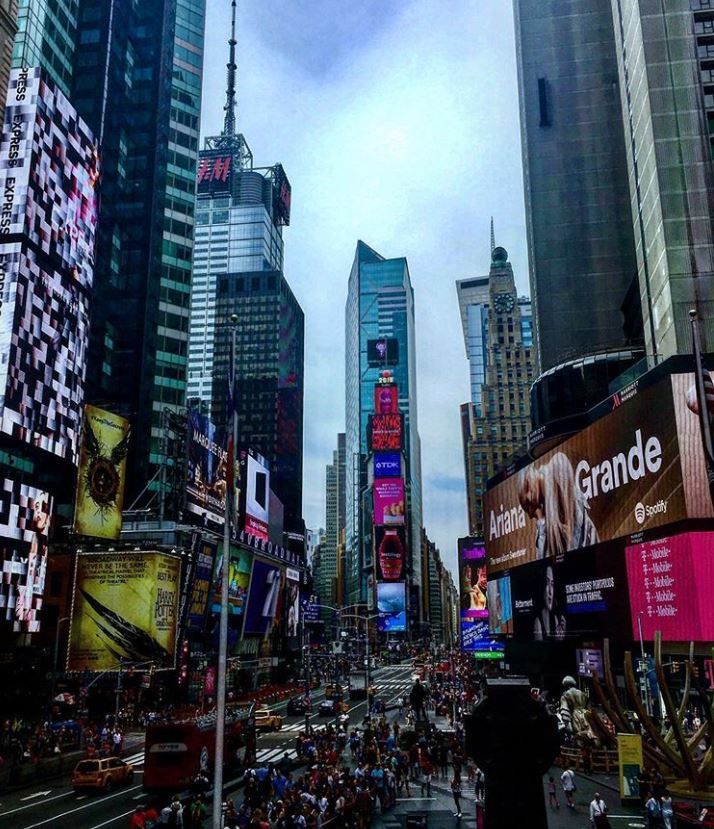 I was in the capital of USA for a month in August of 2018 and the planner inside me had already planned everything I wanted to see, do and eat while I was there. New York City was the first place on my list of cities I wanted to visit - OBVIOUSLY!! Everyone in the States was telling me how overwhelming New York City can be with so many people and traffic, I told them "I am from India, no place can overwhelm me!"

Erin, my closest friend in the US offered to show me around the Big Apple. We had limited time to explore New York and therefore came up with a frantic schedule to cover all of it.

I met her at Cosi Cafe in Arlington which is one block from Rosslyn Station and boarded the bus to NYC in the evening. Vamoose Bus provides daily bus transportation between Washington, DC and New York City. Rosslyn pickup/dropoff location is in front of the cafe.

We arrived the city late at night when the city was still alive and busy. It is rightly said - There is something in the New York air that makes sleep useless.

Manhattan is the most densely populated Borough of the city and is surrounded by the Hudson River bordering New Jersey to the West and the East and Harlem River with the Upper Bay to the south. Manhattan is home to about 1.6 million people and hosts Central Park, The Statue of Liberty, the Empire States Building, Rockefeller Center, Times Square and High Line.

Brooklyn lies Southeast of Manhattan and is attached to Queens. The Brooklyn Bridge connects Brooklyn to Manhattan over the East River. Coney Island's a classic attraction here.

Bronx is the Northernmost of the 5 Boroughs that touches the Hudson, Harlem and East River. Visit Yankee Stadium, the Bronx Zoo, And Pelham Bay Park if you're around.

Queens lies to the North of and attached to Brooklyn to the North and West, the Bronx and Manhattan are across the East River, it also touches the North Atlantic Ocean and the Jamaica Bay. Queens is the site of Citi Field, the baseball stadium of the New York Mets, and hosts the annual U.S. Open tennis tournament at Flushing Meadows-Corona Park.

Staten Island is the southernmost of the 5 boroughs connected to Lower Manhattan via the Staten Island Ferry. You can tour NBC Studios, Staten Island Zoo And High Rock Park while you're here.

I wanted to explore as much as I could, so we woke up super early and headed out after a nice breakfast at the hotel we were staying at.

Standing 1,454 feet tall on 5th Avenue in Midtown Manhattan, The Empire State Building was the first thing we wanted to see. Why? It is the tallest building in the city - perfect for the Ultimate Skyline Views!! The observation deck opens at 8:00AM and we were among the first few people to reach.

The building is magnificent, it houses over 1000 businesses and has its own Zip Code! The view from here was spectacular! Some landmarks you can see from the tall building are - Rockefeller Plaza Center, Flatiron Building, Chrysler Building, One World Trade Center, the Brooklyn Bridge. You can use the high-powered binoculars for views of Central Park, Times Square, the Hudson River, the East River, The Brooklyn Bridge, and The Statue of Liberty.

Fifth Avenue is a shopper's paradise. You will also find residential areas bordering the Central park. If you're someone that loves museums, this is the place for you too! The area between 82nd and 104th Streets is known as the 'Museum Mile' because there are so many museums!

We walked to the Bryant Park, a beloved, year-round New York City destination. It is also known as Manhattan's Town Square. We stayed there for a bit, sat around the park and admired the nearby sky scrapers. The park was lush green making it a perfect spot to take a break and laze.

Next, we walked to the Rockfeller Center known for the many works of art that enrich the complex.

This famous 5ft (4.5 meter) tall bronze statue of Atlas located opposite St. Patrick's Cathedral is a creation of Lee Lawrie. It shows the titan holding the celestial sphere.

Our next stop was the Times Square down 7th Avenue stretching from West 42nd to West 47th Streets. Manhattan transforms into a city of lights as soon as the sun sets. The vibe of this place is magical, I loved the huge billboard displays and the street entertainers dressed as Superheroes.

No visit to NYC is complete without a trip to the world's most famous landmarks - the Statue of Liberty and the Ellis Island National Immigration Museum. We took a cab to Liberty State Park in New Jersey for the Statue of Liberty Cruise. You can buy the tickets in advance from the local websites or in person at the ticket box offices near the ferry departure points in New York City and in New Jersey. The tickets include access to both Liberty Island and Ellis Island.

I was told that the Pizzas in NYC are to die for – I had to try them! Unlike many places in India, you can just order a single slice of your favorite pizzas, which is awesome because I got to taste 3 of them!

After a sunny day exploring The Statue of Libery, it was time to explore the nightlife of the city. We headed to Brookyln for the night, met some amazing people and drank the night away – Frosé was the drink of the night. We talked about our different cultures, laughed at some silly jokes and made some memories dancing through the night.

We stayed the night at a friend's apartment in Murray Hill and headed out in the morning for some awesome bagels (If you're in New York -you need to get a Bagel!)

The next day was spent walking - a lot! We visited the Brooklyn bridge

The 9/11 Memorial site - this was a place that had chills running down my spine. Seeing all the names of the people who lost their lives in the attack was too overwhelming!

And the one place we did not (could not) go to was the Central Park (I KNOW) Being a fan of F.R.I.E.N.D.S, I should have taken a walk to the park too but the weather was not the best to visit the park and we were tight on schedule. But, next time!

Have you been to New York? Please suggest some of your favorite places, restaurants I should visit if I am ever there again!

Thanks for stopping by ????