In and around Almora 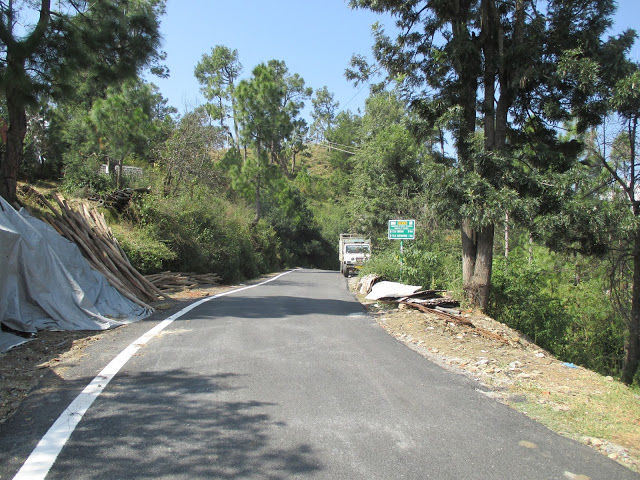 There will hardly be a person in Almora who has not been taken to the court of Golu Devta. People who come from far away drawers in the summer vacation also somehow take time out here. In such a situation, if a local bandada is asked to see what is to be seen here, then the answer will be only Chaiti temple, it is very much believed that this temple is in this temple. Here the dense forest of pine is also found nearby and if the weather is pleasant then the Himalayas also become visible.

Golu devta is considered to be the god of justice in entire Uttarakhand. The person who loses hope of court-court, puts his application in the court of Golu Deity. Now the application is to be applied in the Proper manner. Therefore, a letter is written on the name of Golu Devta by stating the notary Vaghera on Stamp Paper. But some people also say that God knows everything about everyone's mind, then he writes down his problem in a small piece of paper. One rule is that the second letter should never be read. I do not know how much truth is in this rule, but I have come to hear this from my childhood. By the time we used to read the eyes of elders, we used to read it too many times.

Golu devata is called the god of justice, there is a story behind it, it is believed that Golu devta had given justice to his mother. Golu Devta was the son of Jhalarai of Champawat. Despite the seven queens, the Nishantan king was very unhappy. Keeping in mind the desire of the son, he worshiped the Bhairav ​​devta. Being pleased with the worship, he blessed God that if you marry the eighth marriage with some valor, then you will come to your house in the form of a son. After this the king was troubled, from where to bring such a heroine. One day, when Raj went for hunting, he saw a girl who was separating the two fighting men fighting. If Raja proposes marriage to this woman, then you talk to my father. In this way, Raja got married to the amazing personality of Swami Kalinga.

Slowly that watch also came, when Kalinga was about to be the son. But while the other queens had started to hate Kalinga, they smartly confused Kalinga with her words that it is not good for Kalinga to look after her children for some days and her eyes tied the bandage. Her eyes tied the bandage. After this he changed his son to a sealed wagon and placed the child in an iron bucket and sacked him. This box reached a gorihat and flung into a fisherman's trap. He thought a big fish was trapped and dragged the net upwards. When the trap was found, the box was found and the box was opened, a live child inside it. He took this child and gave it to his wife. Due to being a destitute couple, he adopted the child and because of meeting in Gorihat, he named it Goral. Gradually the boy started showing miracles along with his childhood and people around him considered him a miraculous child.

One day, Gouril came to the Balhath and demanded a horse, now where did the fisherman bring the real horse, so he made a horse of a wood. Now Goril began to wander in this horse far and wide, and one day roaming around his father's capital reached Dhumakot and he saw his mother in the queen reservoir there. He asked for permission to water his horse in the reservoir. The queens ridicule him, while the wooden horse also drinks water, then he speaks a child, when a woman can give birth to cobbling, a wooden horse can also drink water. In this way, he narrated the whole story of his birth to the king and got justice for his mother Kalinga. After this, the king handed him his palace and Golu Devta started giving justice to the people around him. That is why the temple of Golu Devta was established in Champawat. This temple is the most mythological temple of Golu Deity.

According to another story, Golu devta Chand Raja was the general of the army of Baj Bahadur and established Chaiti Mandir in Almora in his honor. Slowly known as the devoted deity from here and spreading their fame from here, their temples were spread out in Ghodhakhal and Pauri. They are known as Kandoliya in Pauri, because perhaps a girl from Kumaon took her favored god in her candle and took her along with her, and even there she started worshiping there. After some time, Golu Deity asked someone to dream in a dream and build a temple in Kandolia. If there is an error in this story, then I apologize to Golu Devta. This was about how Golu Devta's temples were established. Now let's go here for the philosophy.

Chaiti Temple Almora is located eight kilometers away on Pithoragarh Road. To get here, bus or share jeep is available from Dharanola Station. Which goes to the Chaitai Temple, Narayan Tevadi Deval. Many times, we used to walk through the road and reach this place and get away from here in a bus or jeep. Here is another attraction along with Chaitai temple and Van Vihar is also there. Whereas, there can be a glimpse of leopards, rabbits, white monkeys, bears, deer and twelve Singhs by giving a ticket of five rupees.