So I decided that my vacation would be a little different this time. Surely not a party destination, no friends or my girlfriend either. I decided to fly solo.

"Of all places, why do you have to go to Rishikesh???"...asked my friends. While like them, many others share this premonition that Rishikesh was all about religion, spirituality and yoga only. I didn't disclose my intentions right then, although they were very clear in my mind:

Adventure Sports (After all, You should always have stories to tell).

Yes, not only is Rishikesh the yoga capital of India, but also a hub for extreme adventure sports: Bungee Jumping, Cliff Jumping, Flying Fox, Giant Swing, White Water Rafting, ATV rides...you just name it. For the first couple of days, I googled for the best possible deal I could grab. Eventually I planned my trip through the website: www.camprollercoaster.com. One could find plenty more on the internet, but I can vouch for sure that these guys are quite prompt. All I did was tell them the dates and the sports I wanted to try. Accordingly they mailed me an itenary (except for the travel charges from Assam to Delhi and back).

And here's what "actually" happened:

Apart from a delayed train, everything else went as planned otherwise. So lets start with:

"Forget the risk and take the fall; If it's what you want, then it's worth it all"...anonymous.

Morning: Shivpuri, the bungee spot is a few miles from the Rishikesh town. A bus picked me up at the designated spot, along with four other guys. The crew members were very friendly and helpful. They were all like: "Oh!!! So you're here for a bungee...great...You've got the balls man. Cheers!!!"

The jump was once in a lifetime experience; and only after it's over, you would want to do it once again. To put it in a few words: It is only but a leap of faith. For those of you who had played Temple-Run, remember the guy makes a faint moan every time he falls into the gorge?? Well when I jumped I felt exactly that moan escaping my mouth. When I watched the video though it was hilarious because the moan was much more than just that. Don't forget to collect your video, badge, and Dare to Jump certificate from the reception counter afterwards. When I showed the footage to one of my friends later, he commented that the whole village must have known that I have jumped!!!

Unless you have it, no one is going to otherwise believe you did a bungee. It was totally worth the few extra bucks I had to pay. Flying Fox also happened on the same day, and was quite thrilling but nothing compared to the bungee. You can fly solo, but being in a group makes it cheaper.

Evening: The same evening, I headed for a nocturnal sojourn by the Ganga, at Shivpuri. A drizzly rain, a bonfire and a sumptuous dinner made the evening much better. I was absolutely cut off from civilization and modern technology. There are over a dozen tents with two beds each. The place is calm and serene. The only sound audible was of the Ganga flowing less than a mile where I stayed. The only civilization I knew were the canteen workers, helpers and the manager. I gossiped with them over random stuff throughout the night. They brought me pakodas and tea and were very friendly. I shared the bonfire with a family of six couples. At first finding me alone, they presumed I was one of those who worked there. Their expressions were priceless when they learnt that I came alone all the way from Assam.

There's no mobile network or WiFi. For safety, carry a torch/ basic mobile phone as there is no provision for electricity (most of the times). For the first time in years, I felt connected to people as a human being, not just a random guy behind a screen.

"The future belongs to the curious: Those who are not afraid to try it, explore it, poke at it, question it and turn it inside out"...anonymous.

Morning: Post breakfast, it was time for rafting. I chose the 16 km route. We were a group of 9 participants and two instructors, who would be accompanying us on the boat. They detailed us with a few tips and soon we were ready. Once on-board, we experienced some 5 to 8 turbulences and each of those would make us fly in the air for a while before we settled down again. We took a slight detour at Maggi-Point, for a cup of tea and some noodles. There, I jumped off the cliff into the Ganga. For a second time in two days, back to back, I experienced gravity.

Evening: Tapovan, where I resided, forms the geographical border between Rishikesh and Shivpuri. Tourist lodges, bus/ cab services, you just name it...and it will be at your doorstep. The Chota Char Dham ('the small four abodes/ seats) is a popular pilgrimage attraction in India. From Tapovan, these destinations are around 300 kms only.

"If you want to know a place better, explore it on foot"...anonymous

I was yet to explore the rich cultural treasure...something for which tourists from all over the world has been smitten by Rishikesh. An array of temples, meditation centres, and yoga centres are concentrated in and around town. Tourists from all over the world throng in here every year. There are plenty of makeshift shops and street-side corners boasting of rings, necklaces, gems, rudraaksh, chillum, etc. The marketplace is complete maze of steps on the other side of the river; sometimes rising up, falling down at other times, occasionally leading to a small tea-stall, a paan shop corner, or a cafe. Do visit Cafe HollyBolly (name inspired from the words Hollywood and Bollywood) and Rain Cafe. Another popular food-joint, near Lakshmanjhula probably called "German Cafe", provides an aerial view of the whole town and the majestic Ganga flowing by it's side.

An ardent fan of nature, if you are, do visit the Neer Waterfalls located on the way to Shivpuri.

The best part was that I did a number of "first time" things. It's always the people you meet who make a trip fun and exciting. There's more to tell than I can write here...just too many stories.

The hotel staff is excellent and so was the service. The location provides easy access to transportation, information on adventure sports/ cultural activities and other popular tourist attractions located nearby.

Located hardly a few miles from Rishikesh, Shivpuri boasts of lofty hills, waterfalls and the clear greenish-blue Ganga. Apart from it's virgin beauty, Shivpuri is home to all the adventure sports activities in Uttarakhand. If you want to try living without technology for a while... try Shivpuri. Break the monotony today!!! You won't have a mobile network/ electricity/ high speed internet; but perhaps you would feel the strongest connection with yourself. The locals working there, were very welcoming too. It was fun that night at the camp as I sat with them behind the kitchen watching movies, drinking chaai. 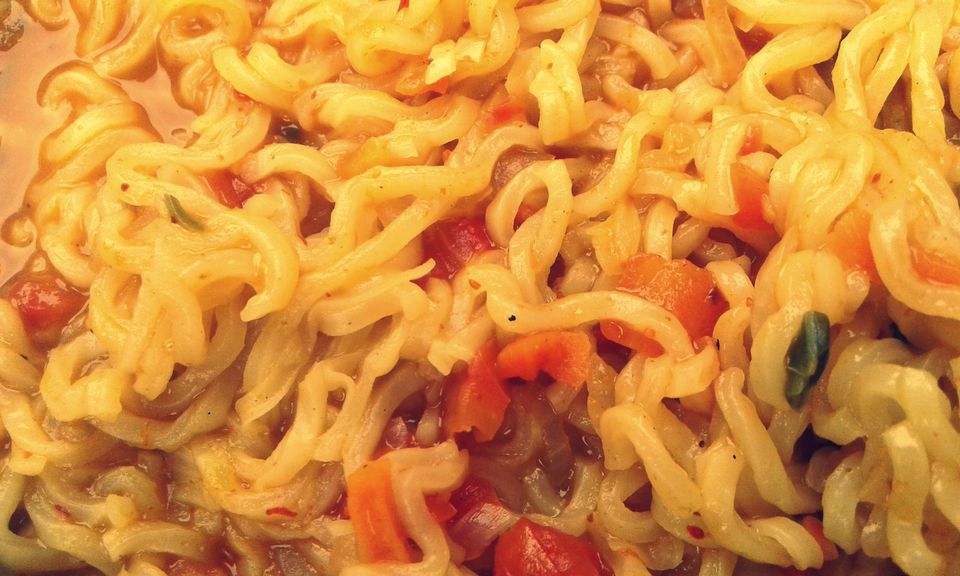 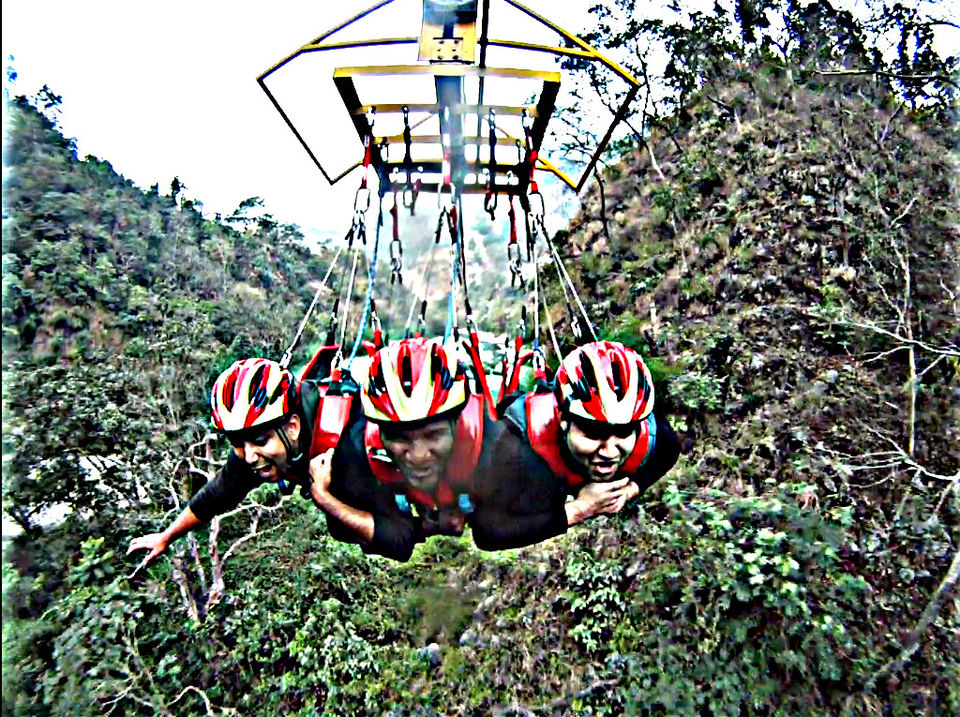 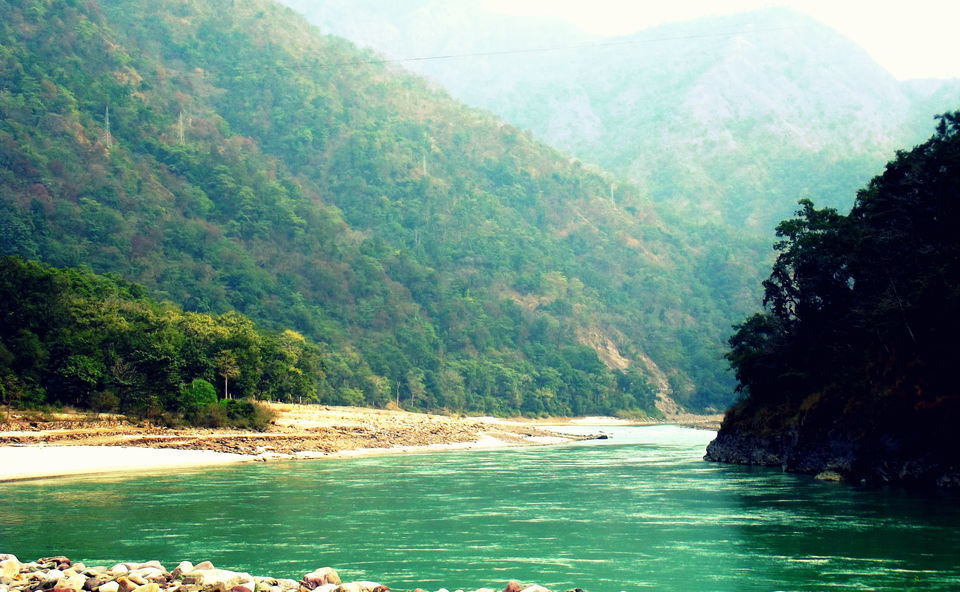 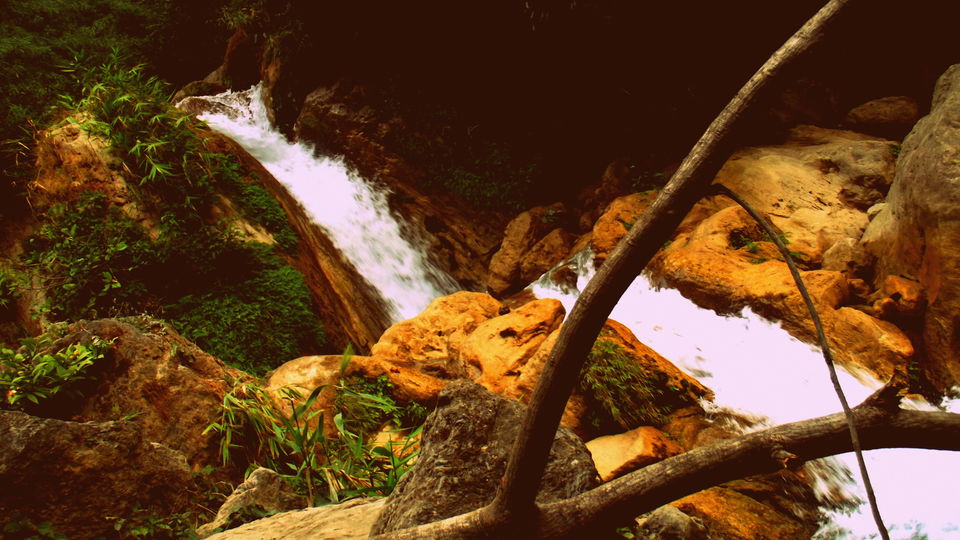 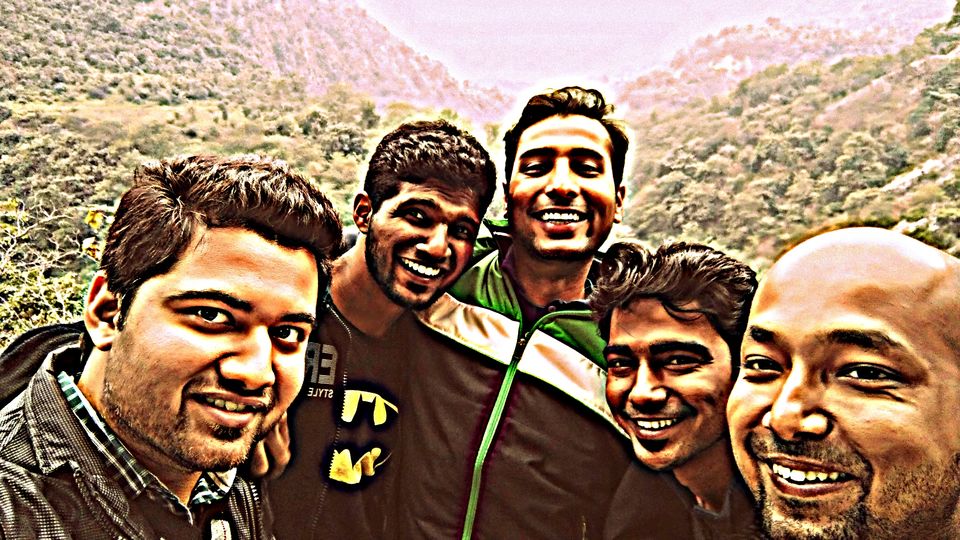 Literally meaning, the "Pond of Lord Shiva", Har Ki Pauri, attracts tourists and locals alike, throughout the year. It is customary for everyone here to take a dip into the Ganga. Plus, the evening Aarti (a public Worship of the Almighty), is a sight to remember...mantras being chanted on robust sound systems, devotees reiterating the words while lighting their earthen lamps and incense sticks. Check that out for yourself. I will spare you the details here. However, beware of fraudsters and pickpockets though; people often tend to be carried away and are less mindful of their environment, while attending huge congregations.

According to Ramayana, after Ravana was slaughtered, Ram & Lakshman, came to Rishikesh. They were believed to do penance for killing Ravana, who was a Brahmin. Legend has it, that years later, a bridge over the Ganga was later built to honour the memory of Lakshman, the ever loving brother of Lord Ram. Hence the name Lakshmanjhula (roughly translated as the bridge of Lakshman). 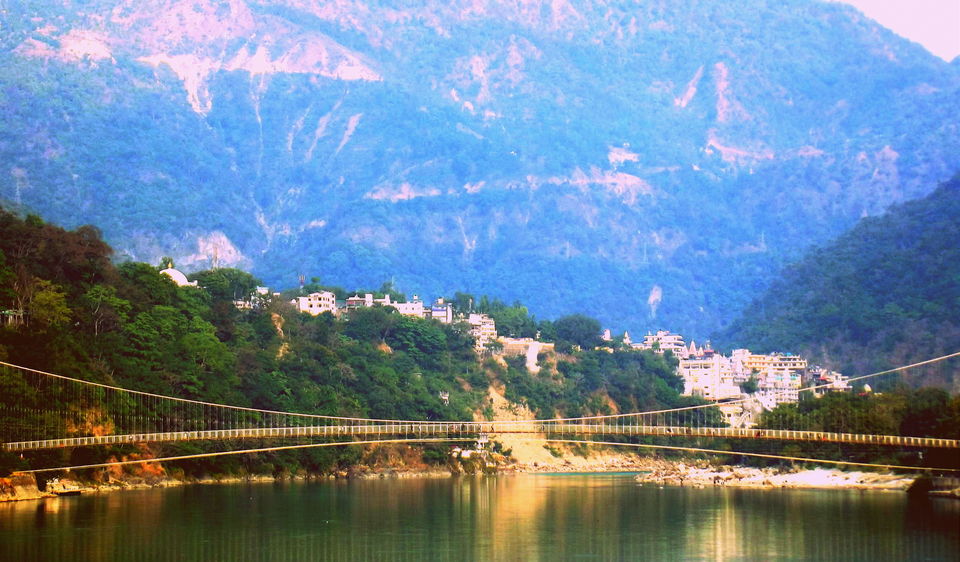 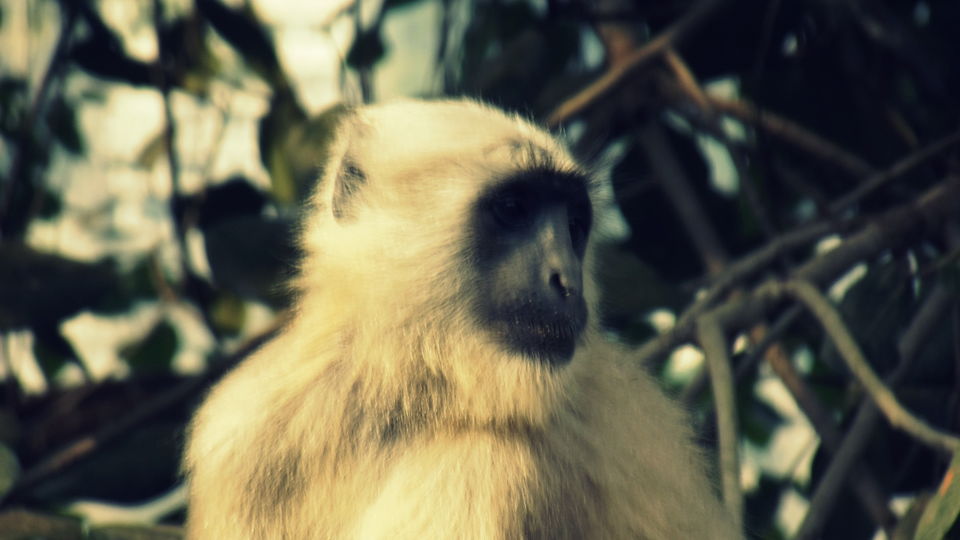 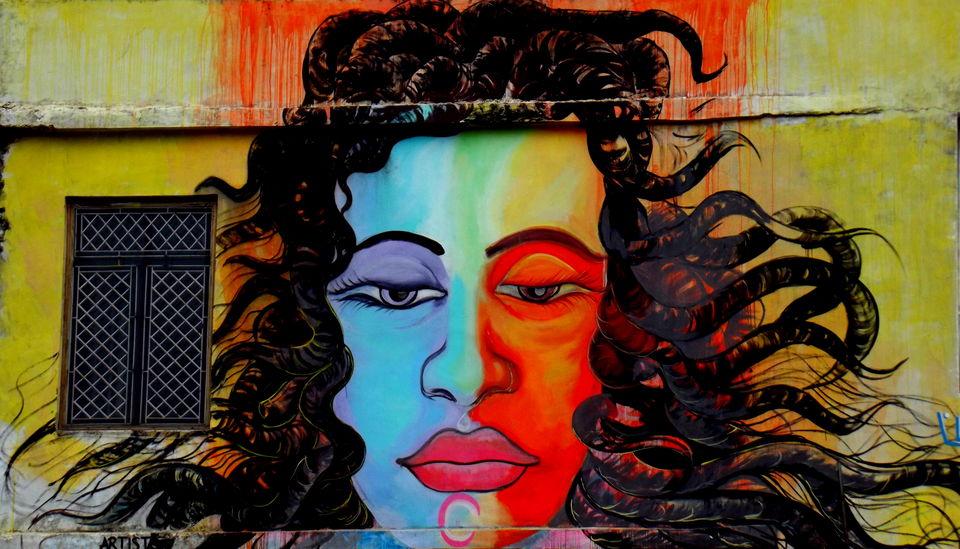