Ramgarh - The fruit bowl of Kumaon

I rested my suitcase against a wooden bench on the railway platform at Delhi Cantonment station. It was a cold and dark December evening. Delhi winters can be harsh and I realised this as I eagerly waited at the station for my train to Kathgodam which was running an hour and half late. Kathgodam was the connecting point to my destination ‘Ramgarh’, situated at an altitude of 6,000 feet above sea level.

Small groups of passengers waited alongside, the crowd minuscule in comparison to most railway stations in India. The train would stop at the platform for barely two minutes. As the hoot of the engine echoed from the dark, the platform (sans signboards) suddenly started buzzing with activity with impatient passengers running haywire to take positions trying to anticipate where their coaches would land.

Unlike the outside temperature, my train cabin was quite cosy and comfortable. After exchanging brief introductions with my fellow passenger who happened to be a big shot politician from a small town near Ramgarh, I retired to bed. The lights were dimmed, the cabin door closed and the curtains drawn. Dense fog had begun to cloak the vast farmlands on the way.

I reached Kathgodam at 5.30 am and boarded a cab to Ramgarh which was situated at a distance of 50 km. Just after a drive of two hours, I began to get a feel of how winters would be like in this region, popularly known as ‘Kumaon.' The region had already received its first snowfall of the season which had been earlier and heavier than expected. I was jubilant at the sight of thick snow lining the edges of intertwining roads.

I had planned my stay at the ‘Ramgarh Bungalows’, a 19th century property constructed in British style architecture and run by the ‘Neemrana’ group. It comprised a group of small bungalows surrounded by hills, pine, oak and fruit trees. My cottage was a bit far from the main area at a steep climb of 400 metres. The cottage comprised four rooms named after the colours they were painted in - blue, pink, yellow and green with a common TV cum reading room and a small dining hall. The cottage was made of clay and wood which kept the rooms warm during winters and was surrounded by a lawn which still had patches of snow from last week’s snowfall. I, being one the first guests to arrive at the cottage, got to stay in the ‘blue room’ which offered the best views and received sunshine all day.

Next morning, I woke up early as the rays of the sun percolated through the white coloured windows of the room. The caretaker served me tea in bone china cups as I soaked up the morning sunshine in the patio. Breakfast was laid in the lawn where I was introduced to pet dog ‘Sheru.’ He would run around the cottage chasing the monkeys on oak trees and stop once in a while to satiate his thirst with water collected in tiny nooks from the melting snow. The parakeets, unfettered with all the action, gently nibbled on pomegranates growing on the trees. I also tried homemade jams available in exotic flavours like peach, plum, apricot and kiwi. Ramgarh is known for its orchards of a variety of Himalayan fruits and it is from this property, that jams were supplied to other ‘Neemrana’ properties.

In the afternoon, I decided to trek in the nearby woods. Thankfully, ’Sheru’ accompanied me, courtesy the bonhomie we had developed at the breakfast table. The village women sat outside their houses basking in the sun or finishing their household chores. School children clad in uniforms paused to say ‘hello’ or pose for a photograph while returning from school.

As the evening set in, a haze of smoke from firewood burnt in a distant hut began to encase the green mountain slopes. When I returned to the cottage, the lanterns were lit and the bonfire was set. It was time to unwind with some wine and conversations with fellow guests and hotel staff. The hotel staff was ever-willing to chat about local topics like snowfall, vegetation and birds which was a pleasant change from mundane city topics like cricket, politics, movies and finance. Soon dinner was served which comprised dishes cooked in ‘Kumaon’ style with infusion of local spices with fresh produce grown by villagers besides some continental options. I loved the sumptuous mushroom soup - thankfully, the chef agreed to share the recipe.

Next day, I visited ‘Sattal’ (an interconnected group of seven freshwater lakes) situated at a distance of 30 km from Ramgarh. I opted for a boat ride in the quiet waters of the lake which appeared green due to dense foliage surrounding it. The fresh aroma of crisp mountain air, the soft sound of wooden oar splashing against the water, the duck quacks in the background and the feel of cold breeze on my face made me sense the stillness of time.

A week had passed by. Sipping my morning cuppa of tea while sitting in the courtyard, watching the daily mayhem between territorial ‘Sheru’ and the agile monkeys, lying supine on the lawn grass while reading a book and soaking up the sun the entire day and retiring to bed early after absorbing the warmth of the bonfire and watching the stars had become my daily routine. Though the place did have its share of idiosyncrasies. One morning, I found ‘Sheru’ hobbling at a tardy pace. The caretaker told me that he had been bitten by a hawkish monkey during their daily tussle. One cold evening, the cable connection for the television stopped working. I got to know that a monkey had got electrocuted by a wire.

On the last day, I visited Nainital situated 35 km from Ramgarh. I walked by the famous ‘Naini' lake - it was very cold and windy. I stopped at a small bakery to try some warm brownies which were quite flavourful and had the perfect infusion of simplistic baking with a local touch. Later, I headed to the boat club for lunch. Its wooden deck was a perfect spot for taking pictures in the backdrop of lake waters glistening in soft sunshine. I strolled on the mall road and shopped for souvenirs including a wooden sailor clock and an old brass telescope.

It was my last night in Ramgarh. I sat next to the bonfire gazing at the star-studded sky. Suddenly, the lights went off and the entire area was pitch dark. The orange ambers of the bonfire burnt slowly and emitted light soft enough to allow me to see the zillion stars, the ‘Orion’ and occasionally some shooting stars. I closed my eyes and pondered if such places would forever remain isolated from the main towns and hence retain their charm. A flash of light from the bulb on nearby wall made me open my eyes. Electricity was back but there was still ample time for conversations and other chores while it would be just 9 pm. This holiday had taught me how to slow down, experience the stillness of time and be comfortable with the sound of silence. 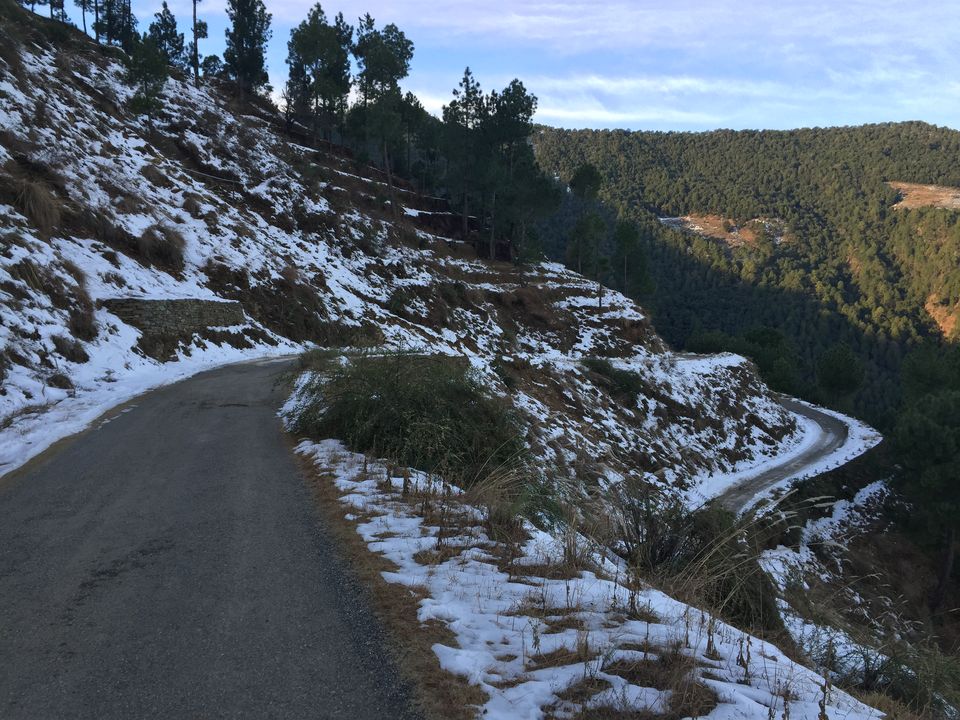 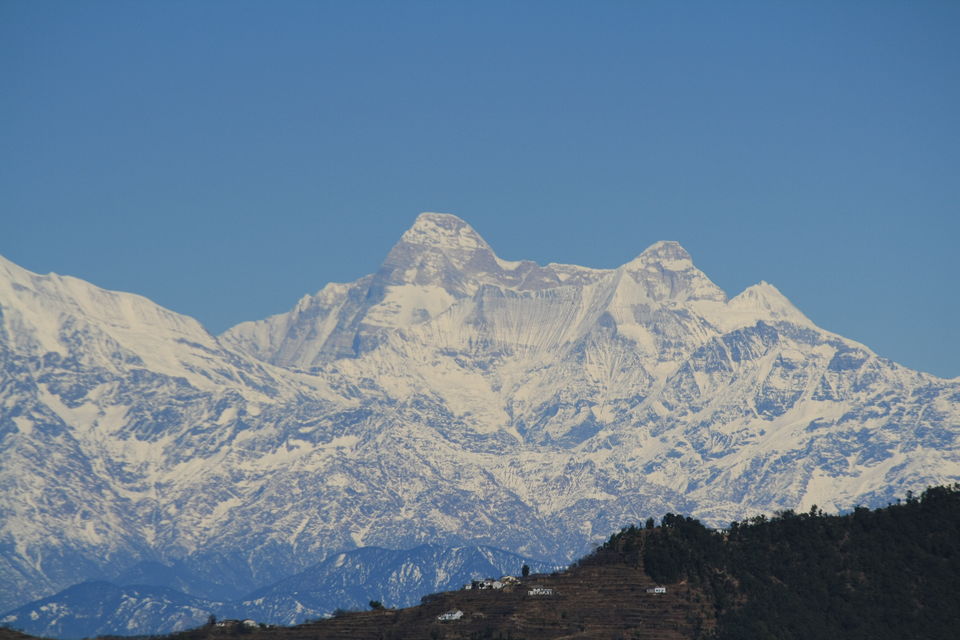 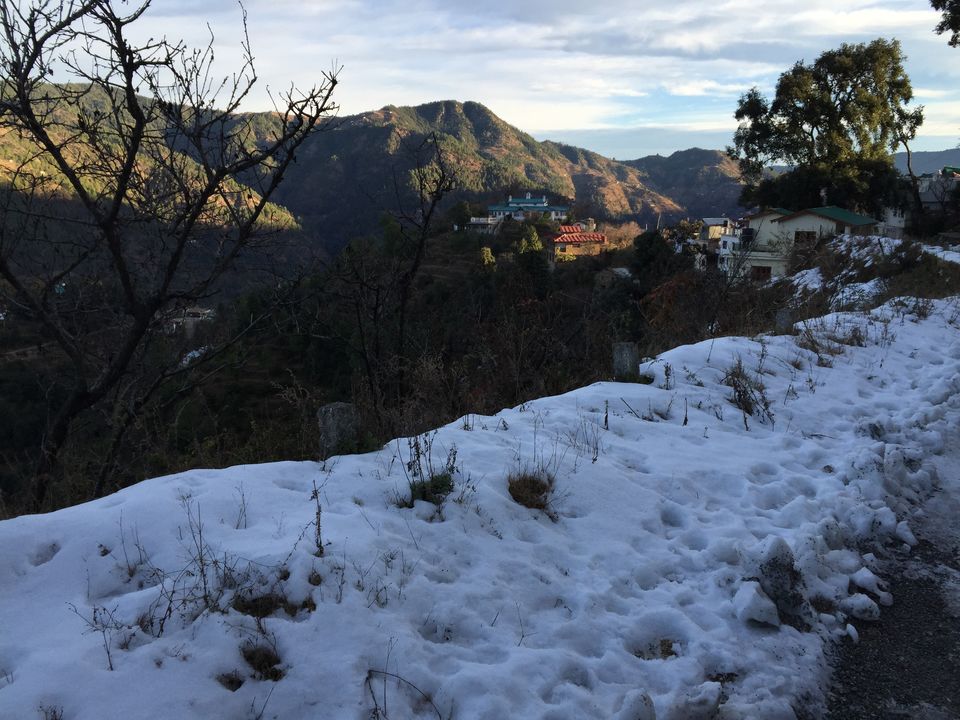 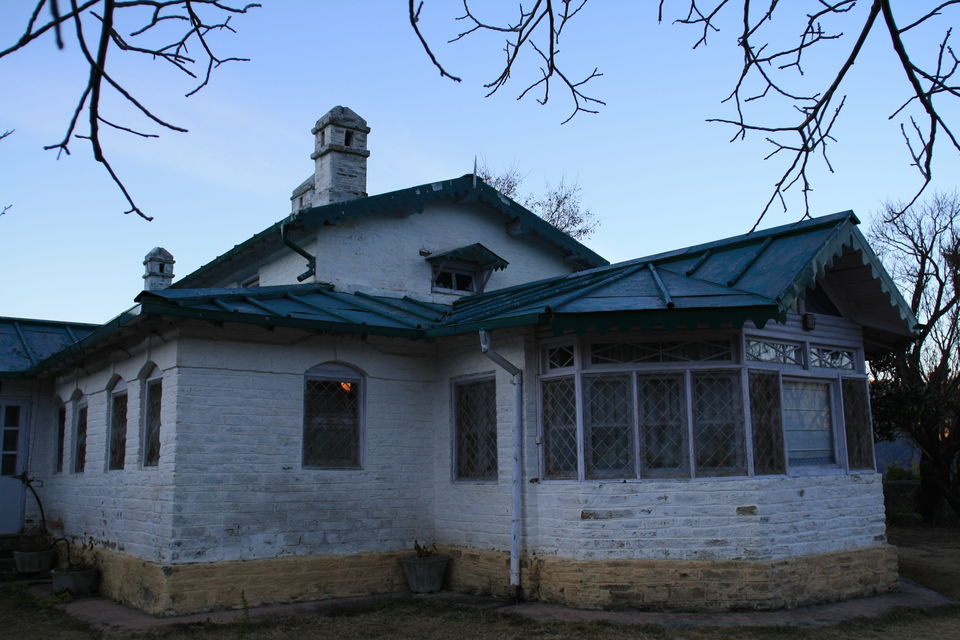 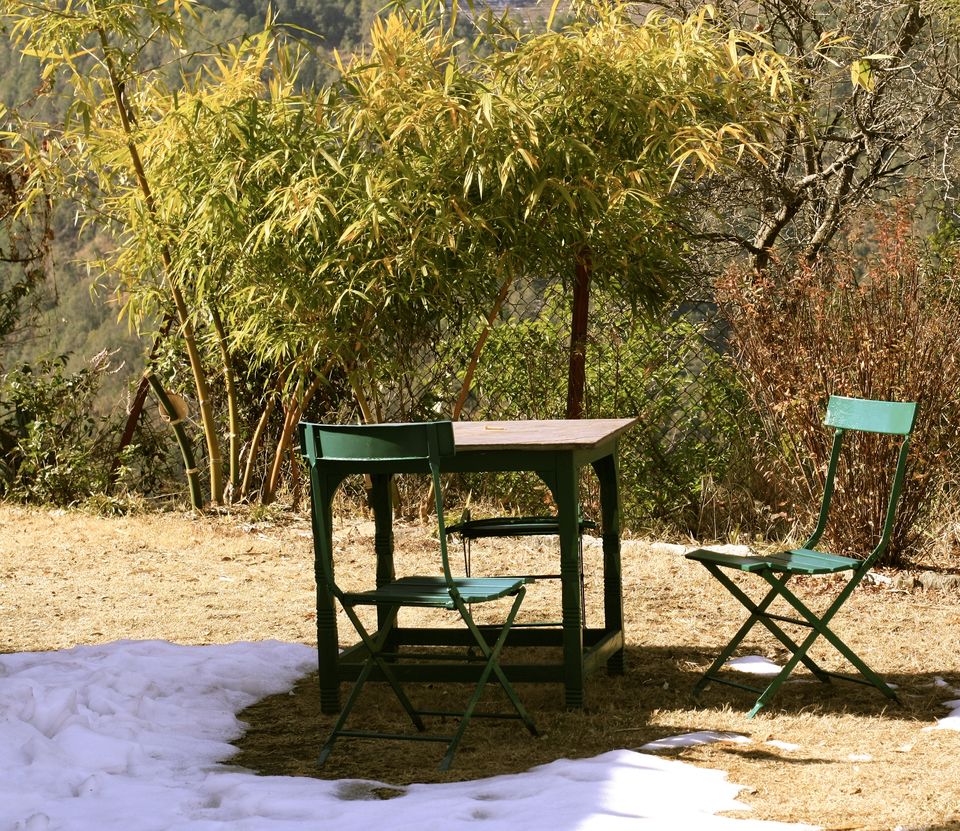 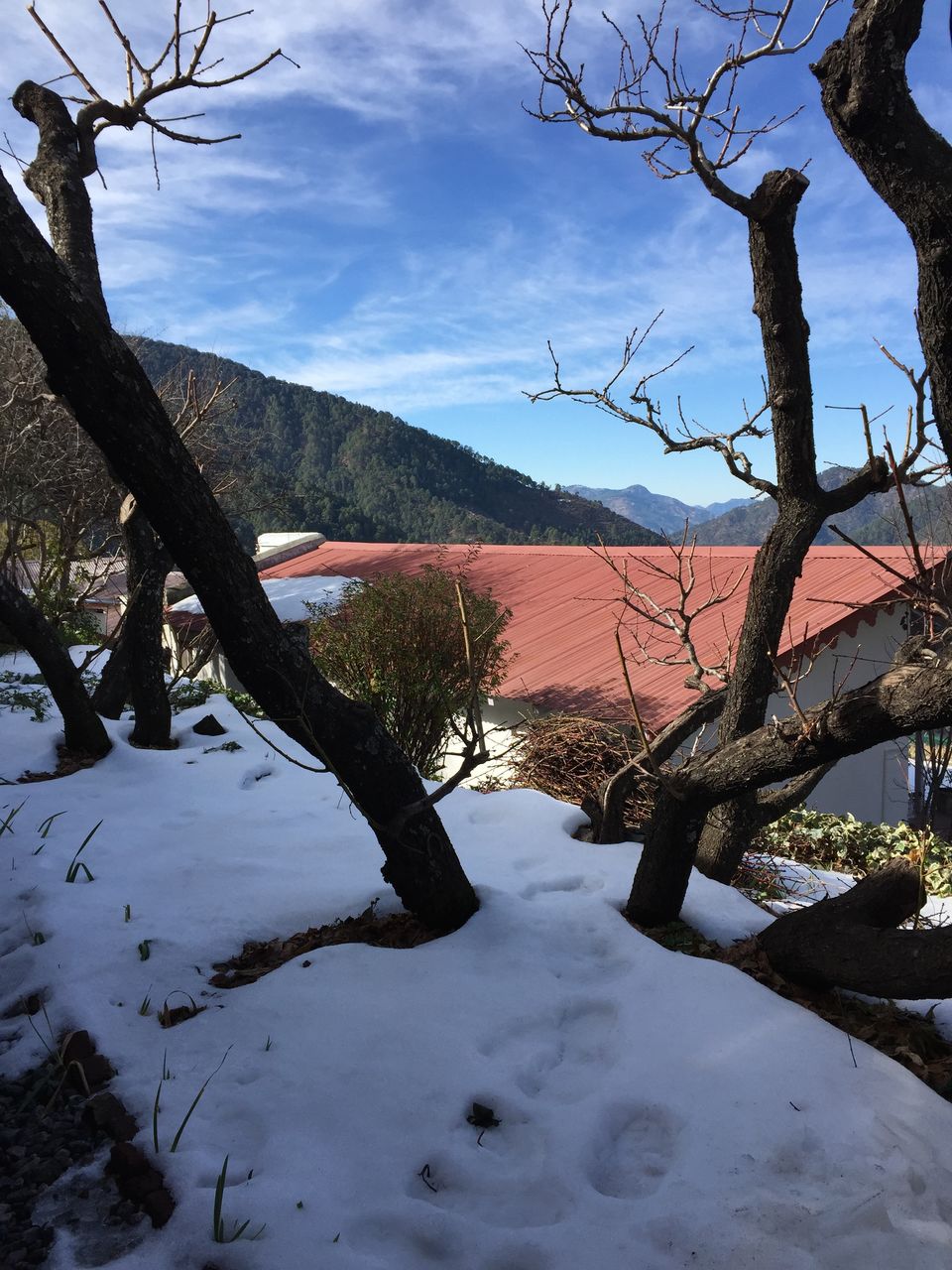 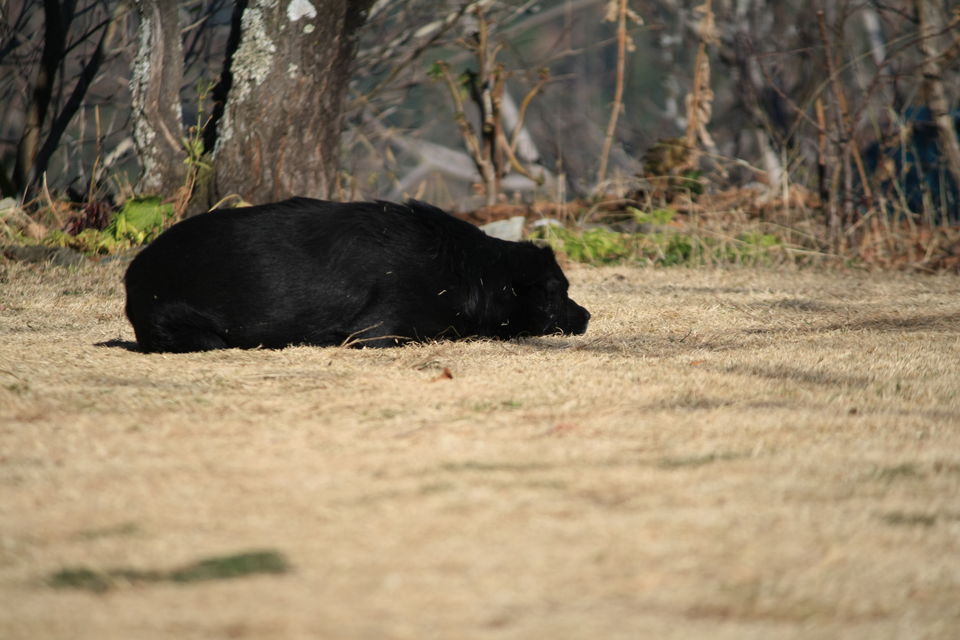 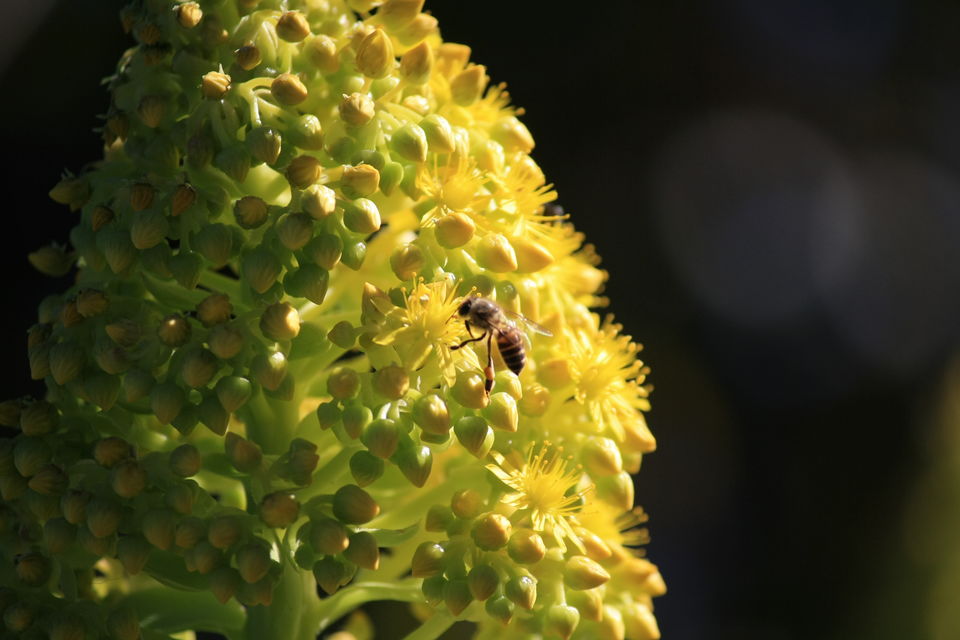 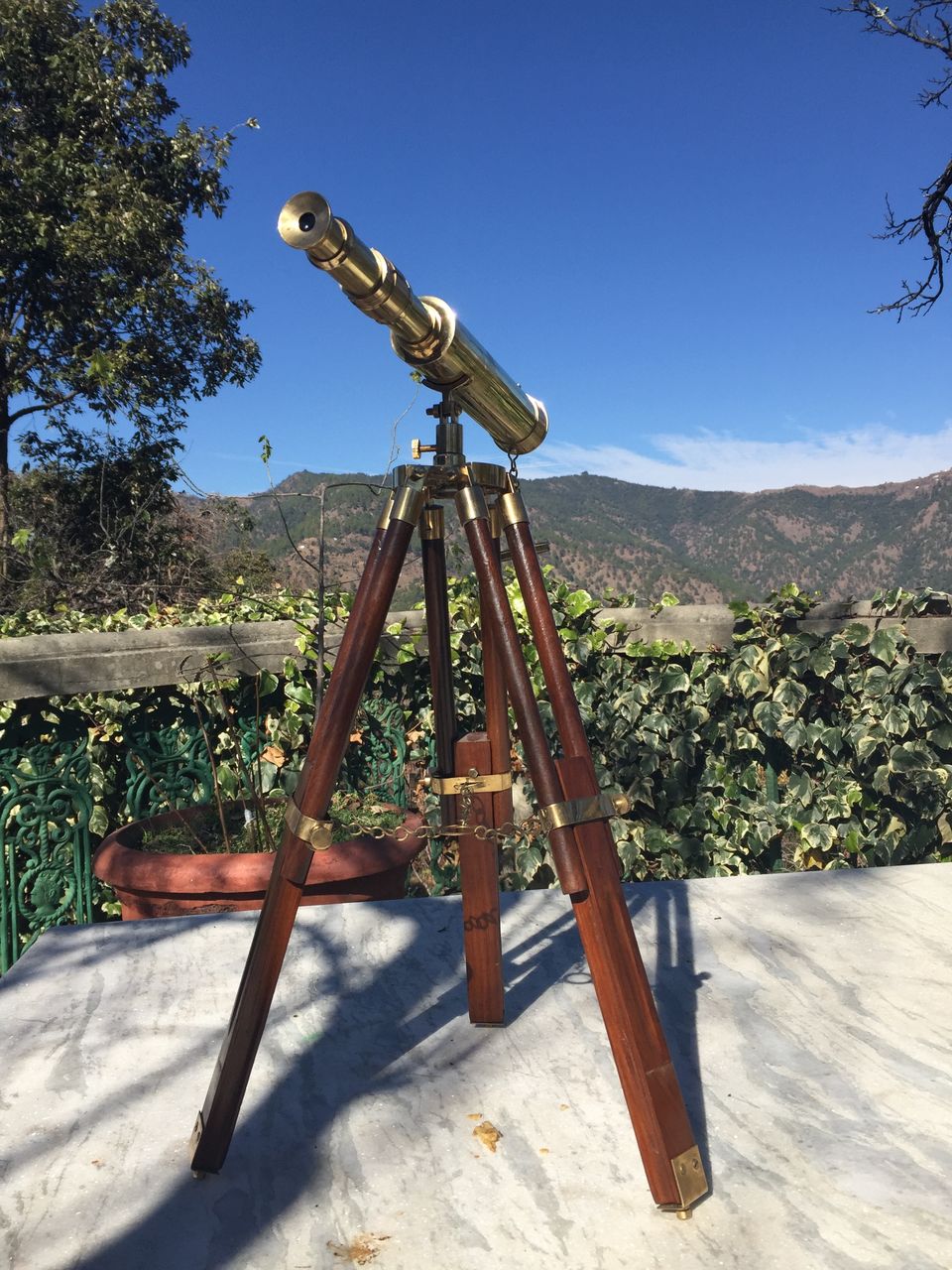 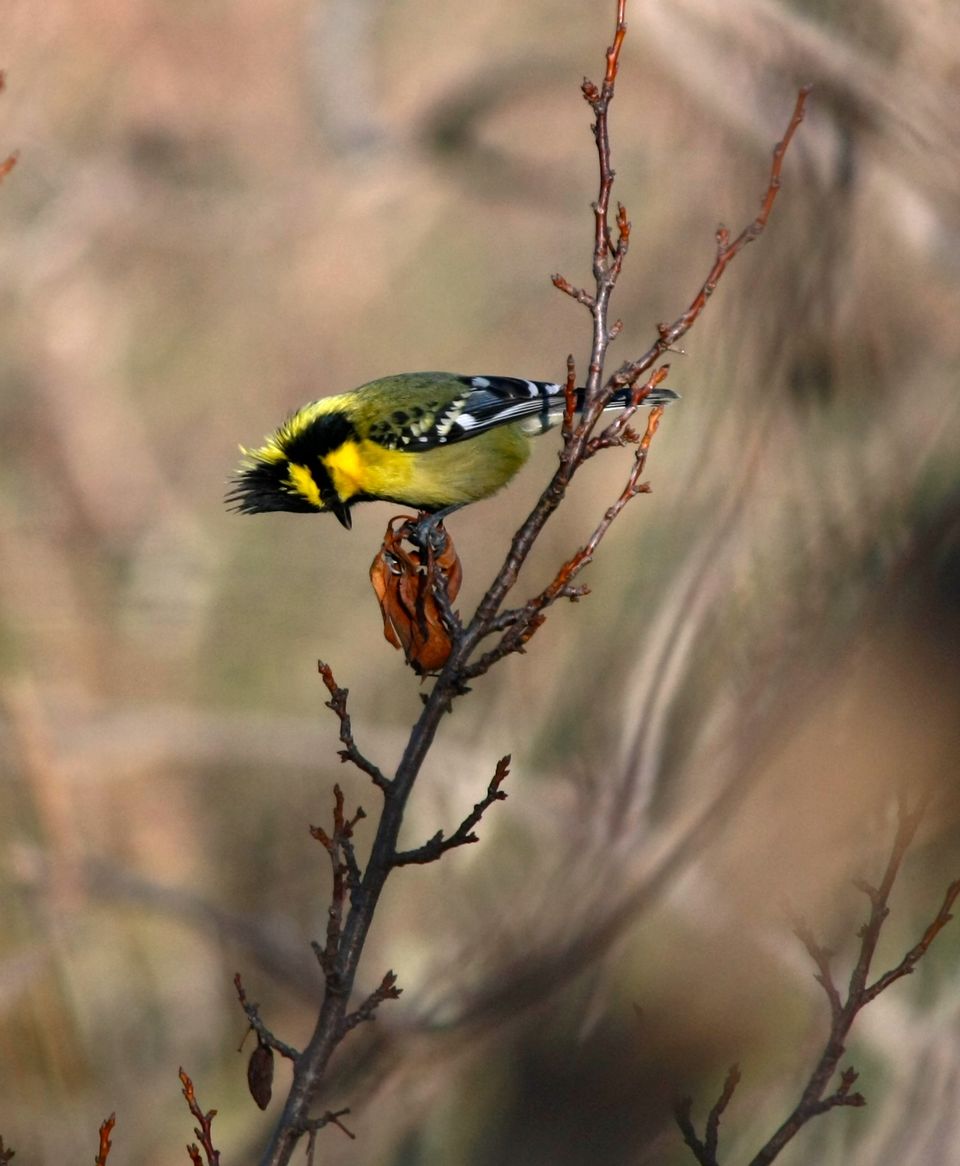 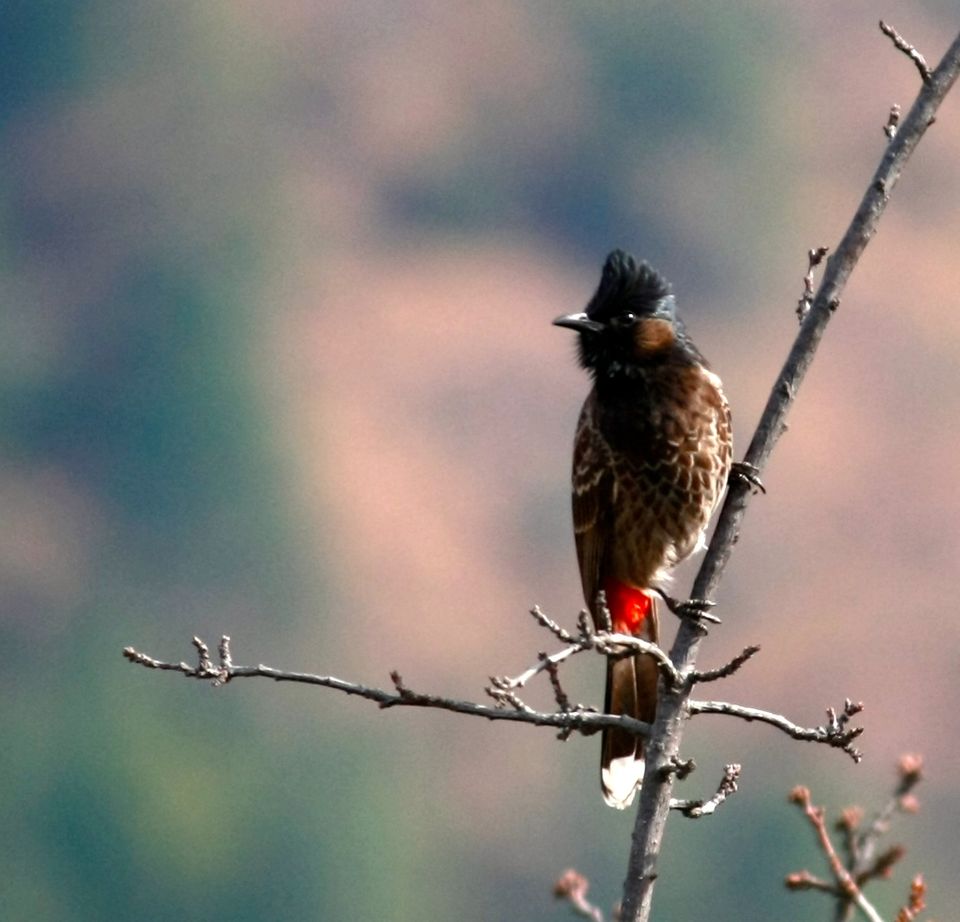 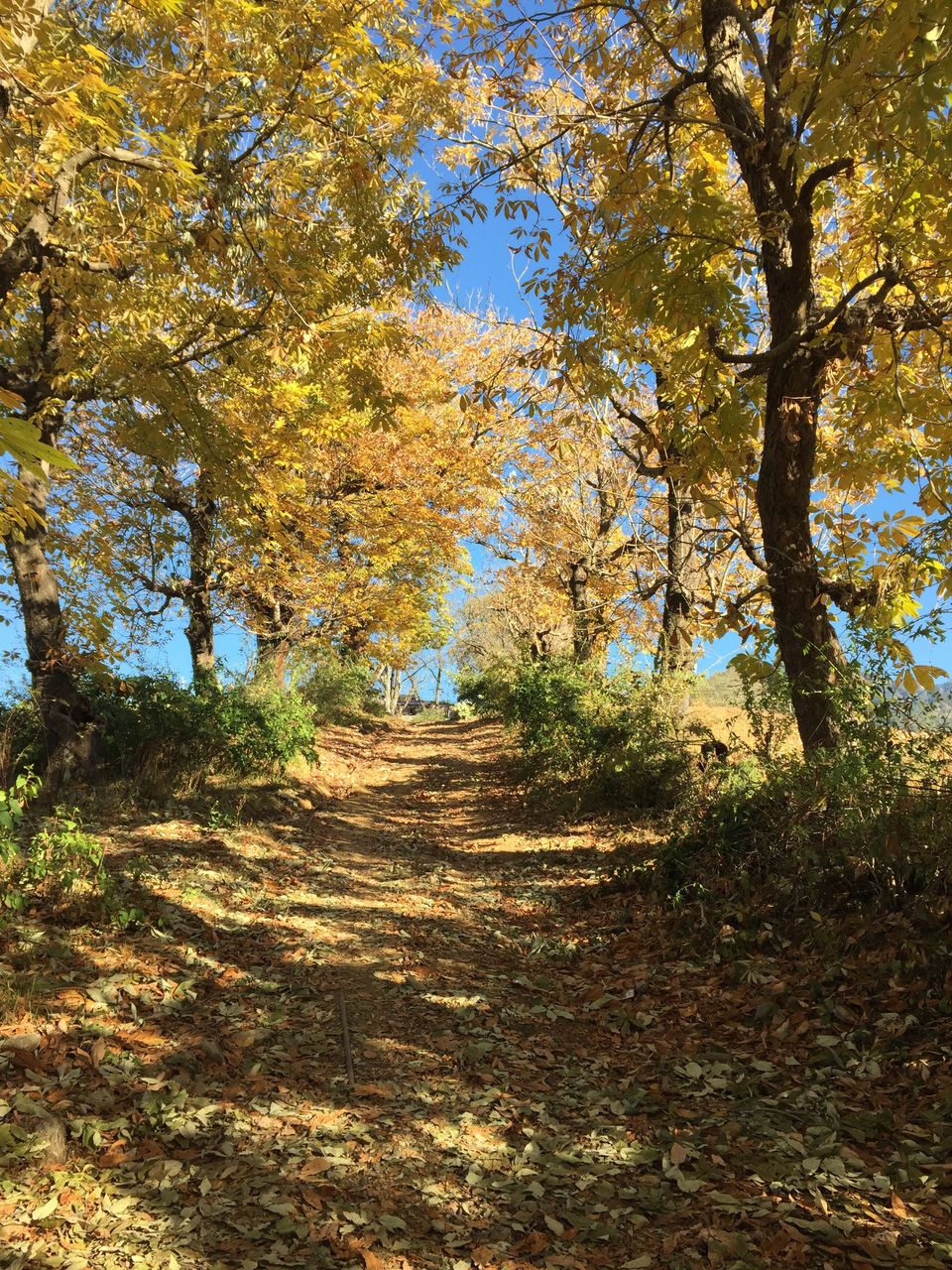 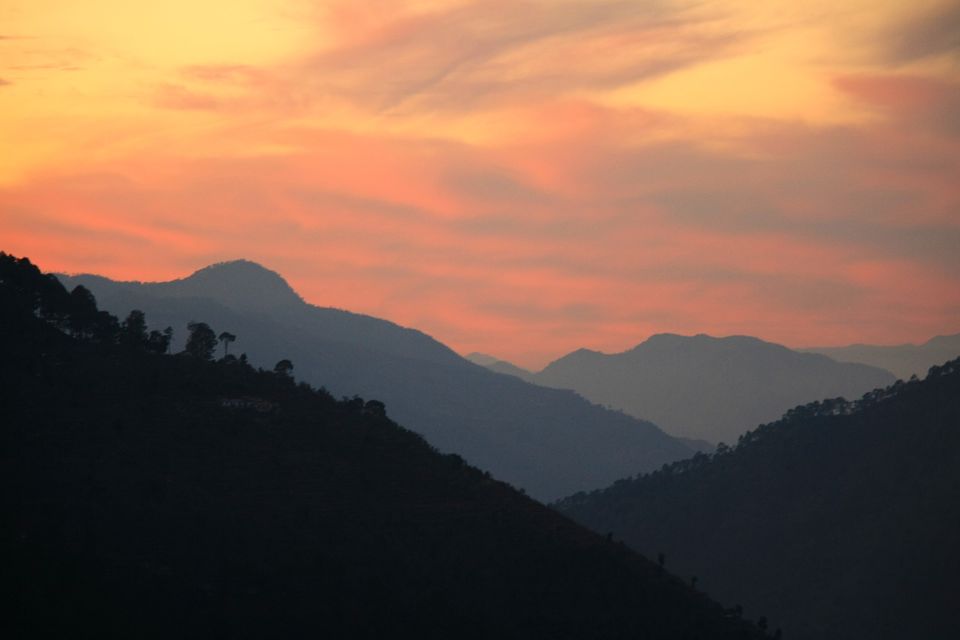 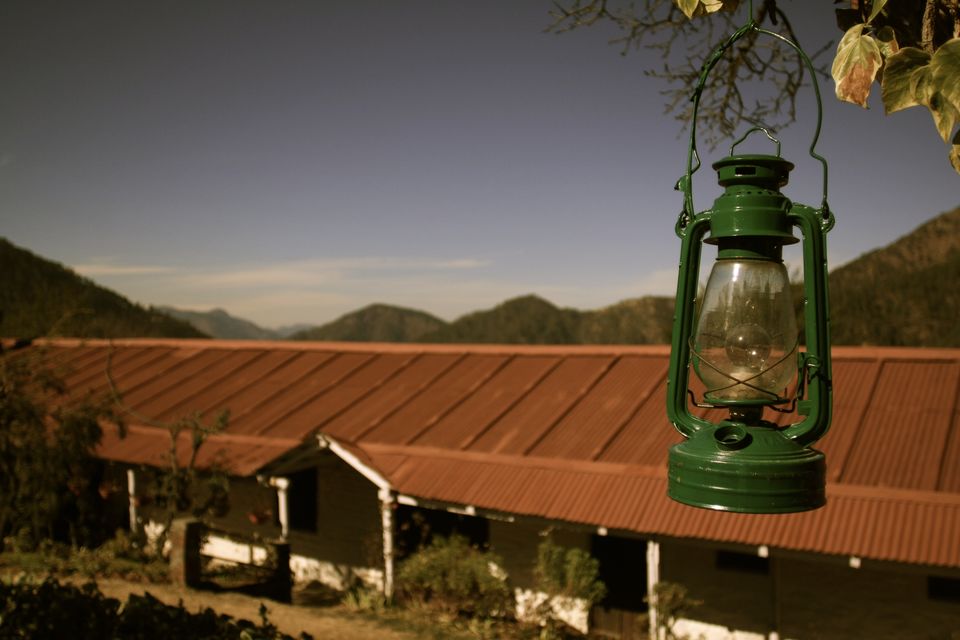 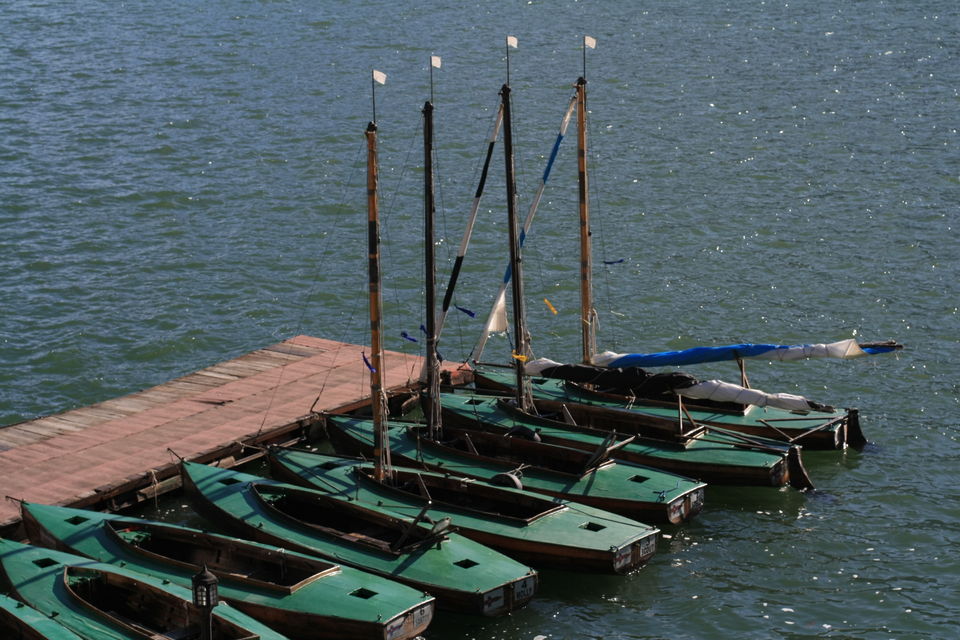 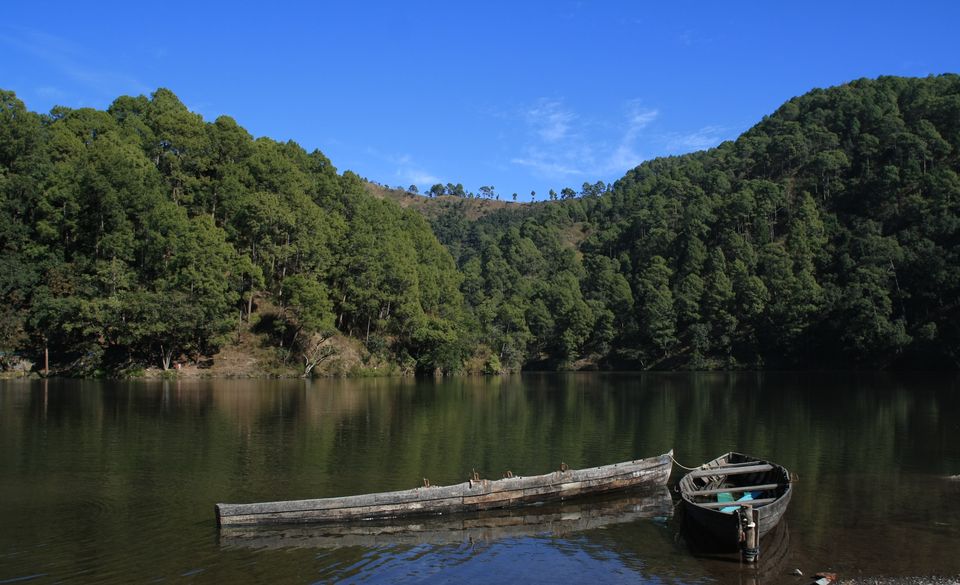