A Road Trip to UTTARAKHAND

After an overnight train journey from Ahmedabad to Delhi, we a group of 9 friends arived at Delhi Railway Station at around 7 in the morning and thats from where our journey started.  We headed towards Rishikesh via Haridwar in a 12 seater tempo traveller.  Its a 6-7 hours drive from delhi to rishikesh but for us it took like 10 hours because of the delhi traffic and 1 hour hault at Haridwar.  So basically we reached Haridwar in the noon at around 3 O'clock.  Visited Har ki Pauri : One of the most famous ghats on the bank of the holy river Ganges.  After spending some moments of peace at the ghat, we left for Rishikesh and reached there at around 5:30 in the evening. We stayed there at Hotel Neeraj Bhavan, a nice and descent hotel for a bugdet stay.

At a hotel in haridwar

The 2nd day of our trip and probably the most exciting one too. It was the day of Rafting and some Bunjee Jumping!  After having a delicious breakfast we went for our rafting expedition.  Rishikesh is famous for adventure sports and specially Rafting.  The 9 of us did Rafting for one and a half hour and it was no less then a roller coaster ride! The Chaotic and Turbulent flow of the Ganges made it even more exciting and full of adventure.  Usually they charge around 500-1000 ruppees/person depending on the number of people and the distance you want to raft.  For us they charged 900/person but after some bargaining it was 700/person for a distance of 16 km. Rafting is definitely not a thing to be missed if you are in Rishikesh.  After some relaxation and a maggi break, we headed for Jumpin Heights : an adventure sports center in Rishikesh and the highest bunjee jumping destination in India(83 meters)  This place carries out 3 main sports i.e. Bunjee Jump,  Giant Swing and Flying Fox. 3 of us did Bunjee Jumping over there, Had lunch and then back to our hotel.

A snapshot from our rafting video. 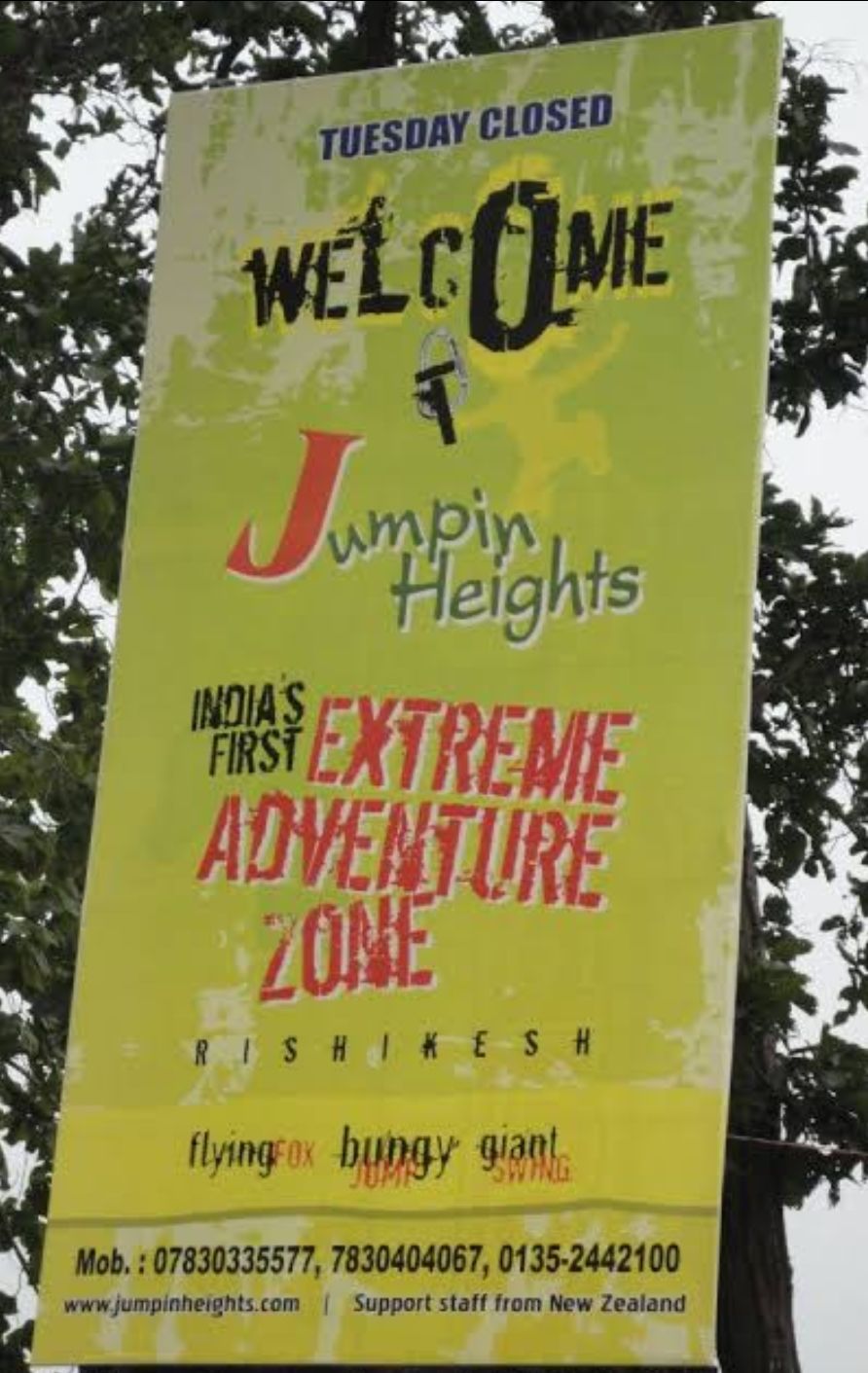 After an adventurous day at Rishikesh, we left for Mussoorie the next day in the morning at around 10. It was a 3 hour drive along with beautiful landscapes and roads covered by long trees on both the sides.  As we reached mussoorie the weather started turning cloudy and windy, so we decided not to waste time and directly went for local sightseeing before it starts to rain. It was already 2 degrees.   We Visited the famous Kempty falls and the mall road. And before we could visit other places the weather got too windy and we decided to go to the hotel.  And as soon as we stepped in our rooms......it started snowing!!! We stayed at Hotel Vishnu Palace and it made our one day stay at mussoorie a worth because of its beautiful location and food. We had just one day in mussoorie and due to weather conditions we were unable to visit other spots but the  snowfall made it worth.  One must stay here for 2-3 days if time permits. 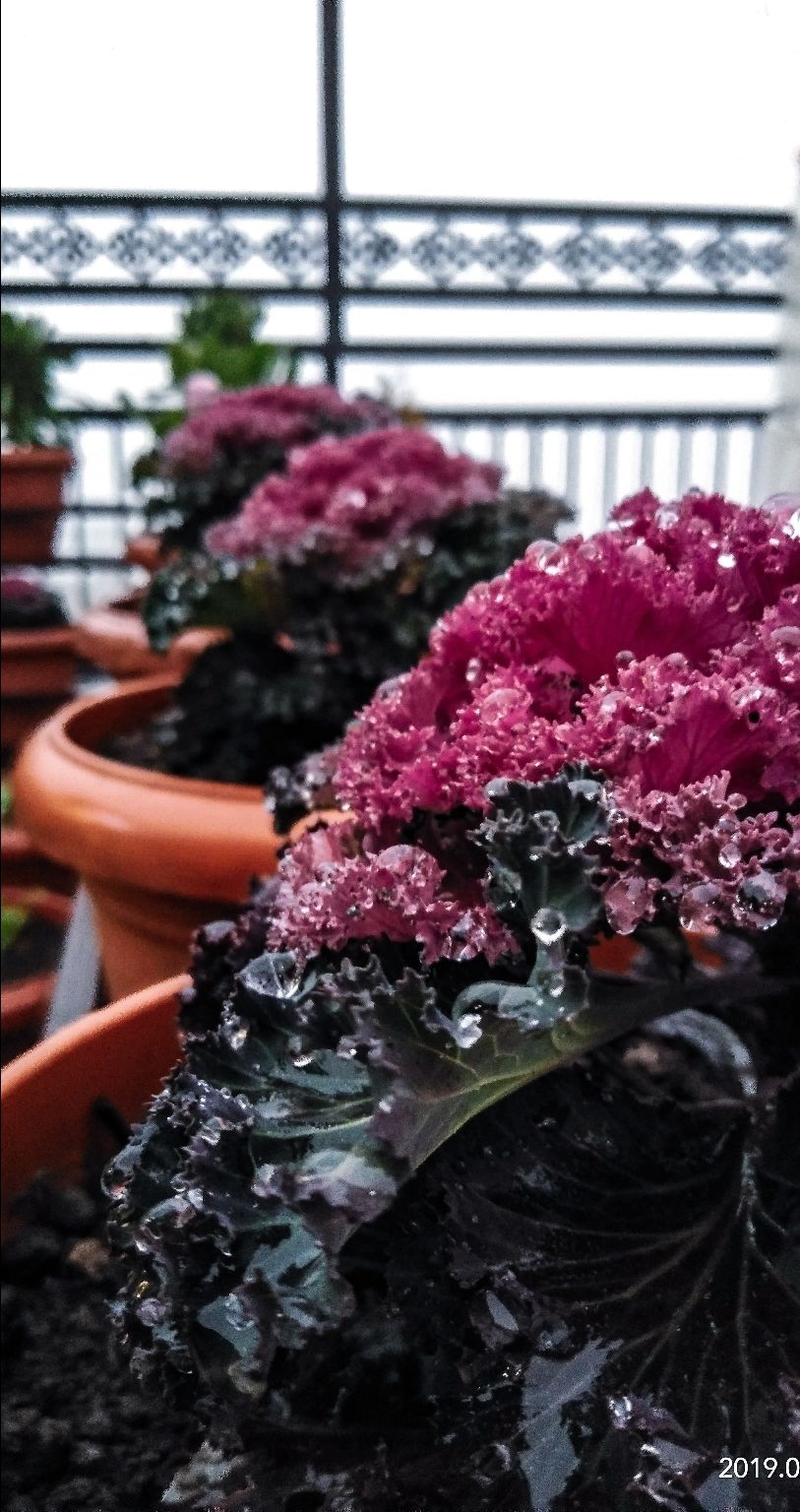 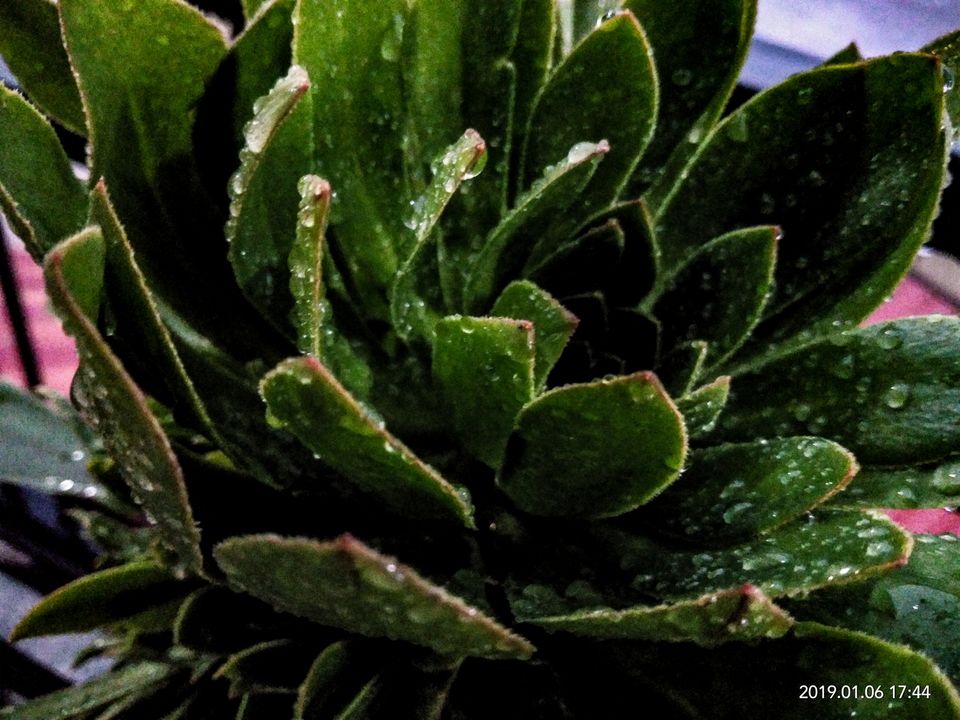 Early morning at 6 am we left for Joshimath via Dhanaulti,  Kanatal and Tehri.  Its a 10 hour drive so we left early in the morning from mussoorie. To our delight,  as we moved towards Dhanaulti, slowly the roads started showing signs of fresh snowfall. There was light snowfall the night before and hence dhanaulti and kanatal was covered with fresh snow. Due to snowy roads it became difficult for the vehicles to move ahead and there was a lot of jam. So we luckily we got 1 hour to enjoy the beauty of dhanaulti due to road block. It was almost 9:30 am and after the jam cleared we moved towards tehri via kanatal. 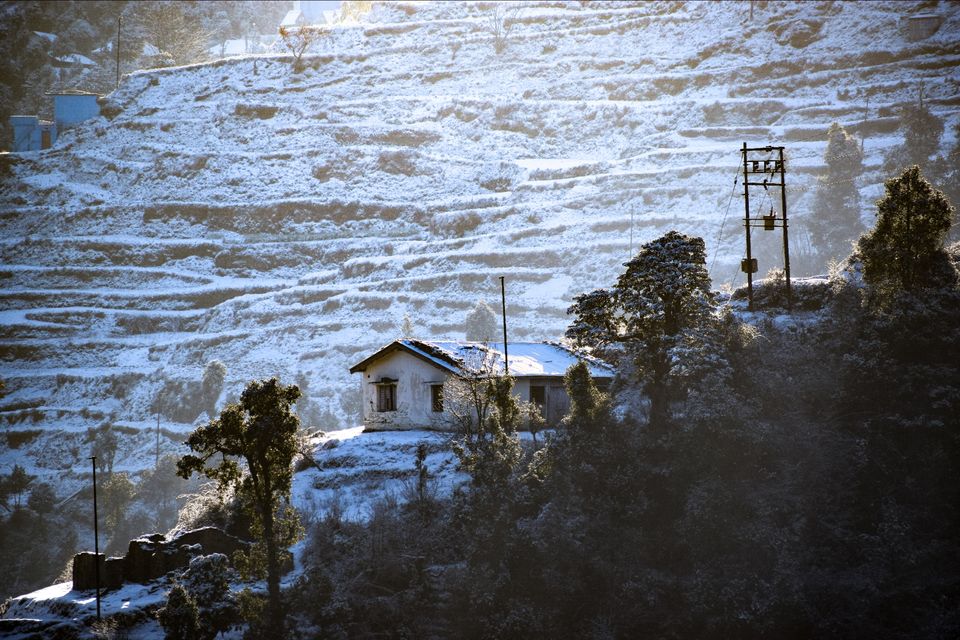 Snow all over Dhanaulti 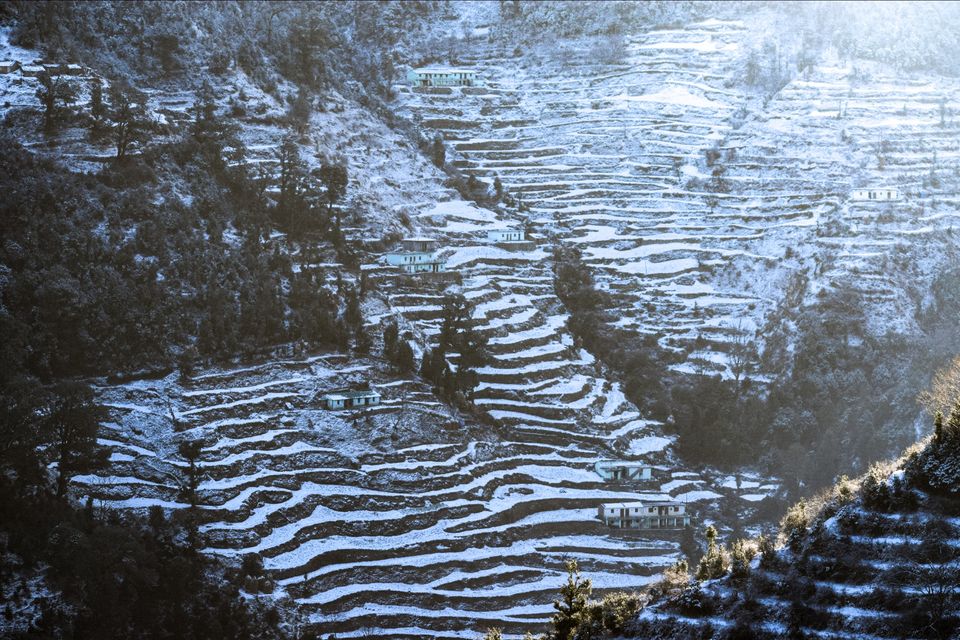 Reached Tehri Dam Lake at around 12 pm.  Tehri Dam is one of Asia's highest dams. We stayed there for almost half an hour and then proceeded towards joshimath. In between we took a lunch hault at Rudraprayag.  As we started getting close to joshimath, the road conditions started getting worse, due to some construction work going on. It started getting dark and again the snowy roads of joshimath; making it even more difficult for our tempo traveller. But kudos to our driver,  he was a pro.
The journey was quite long but due to lack of days we had to complete it in one day otherwise one can take a one night hault at chopta.
It was -9 degrees when we reached joshimath and the hotel staff said it will go down till -12 as the night darkens, so without any delay we had our dinner(was not much delicious) and went to sleep. 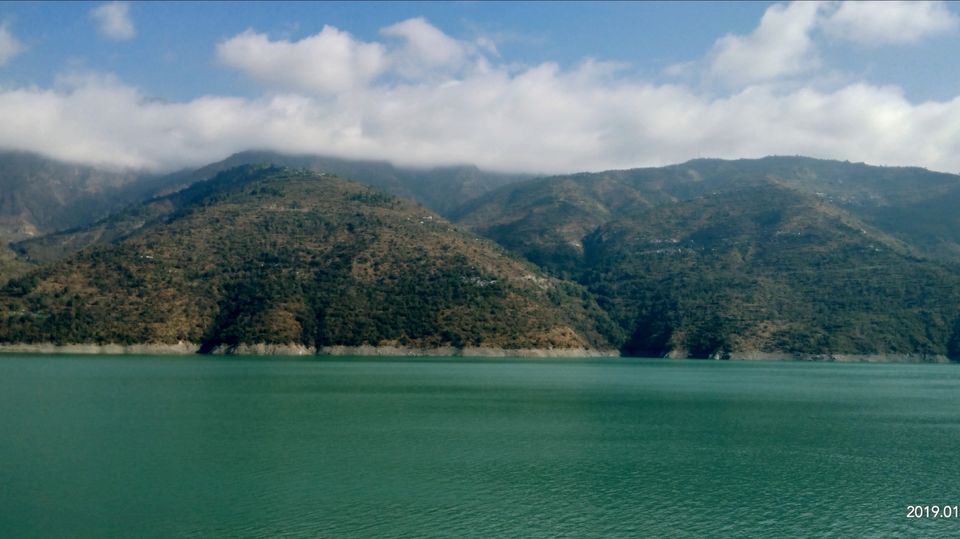 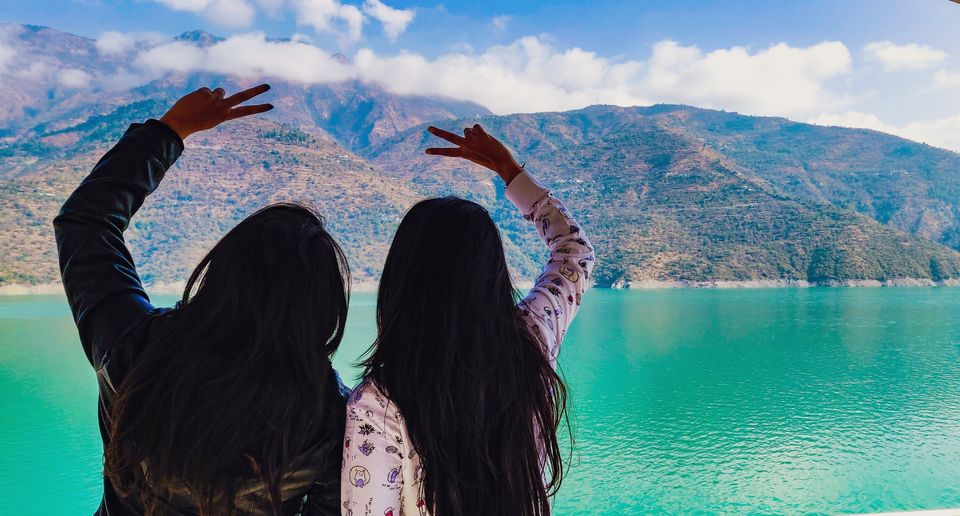 The day we all were waiting for.  Waking up to a beautiful morning at the Himalayan Eco Lodge (our stay at joshimath) was so mesmerizing! Snow clad mountains on all four sides,  birds chirping and  trees covered with frost. After having some tea and breakfast we left for auli at 8 am.  There are 2 ways you can reach auli from joshimath :
1. Ropeway (the longest Cable Car(4 km)  in asia after gulmarg)  charges 750/person which will take you directly to the auli lake.
2. Take a taxi from joshimath to auli and then you will have to take the ropeway Chair Lift(300/person) which will take you up to the auli lake.
We were a bit late to take the cable car as booking was full.. So we had to take a taxi (2000/taxi). At first we felt a lot of regret for not being able to experience the cable car but after reaching auli by road we were all content.  Infact the taxi ride was much better and fascinating. Roads covered with snow on both the sides, trees covered with powder white snow and beautiful views of the nanda devi ranges just felt like heaven.

I woke up to this view! 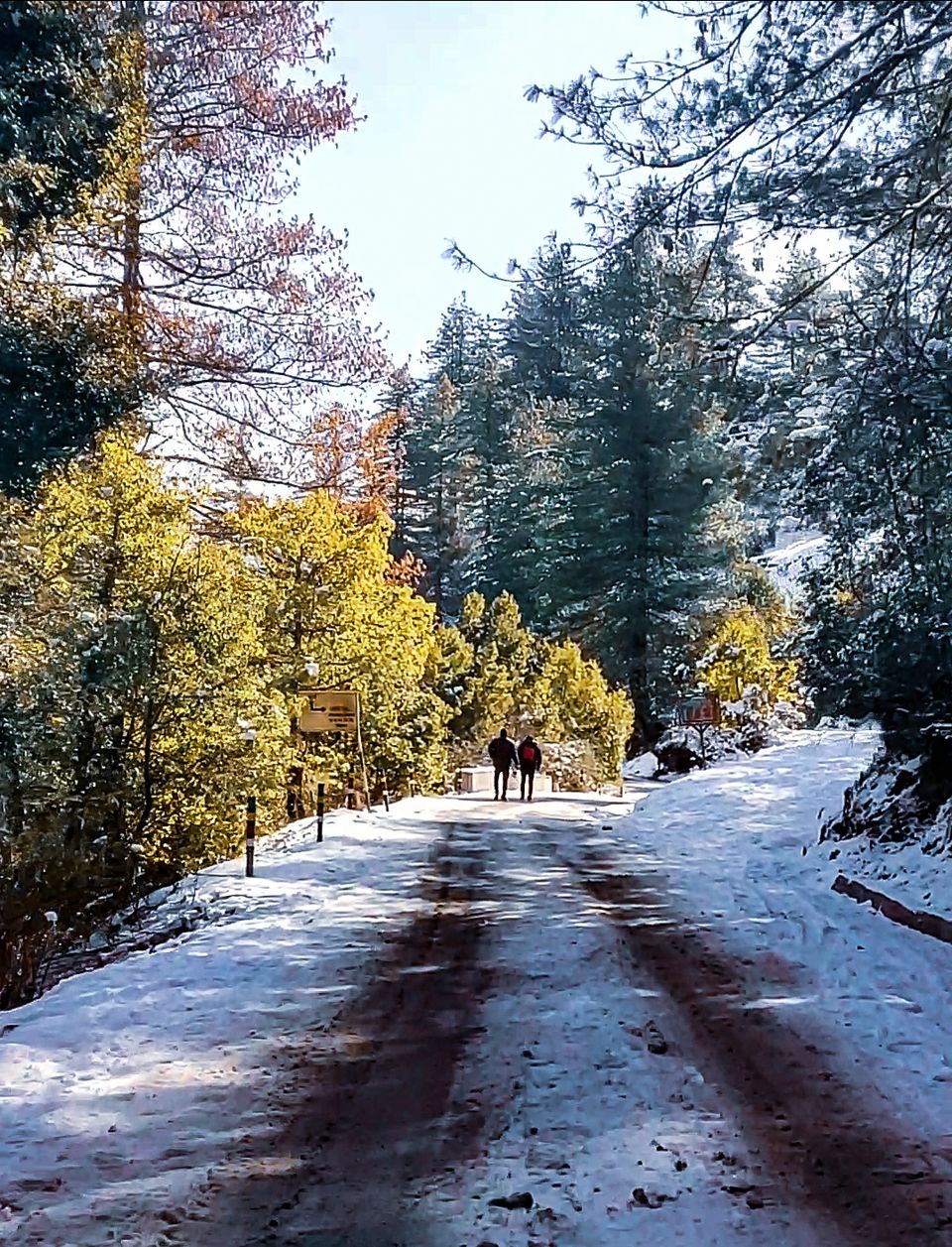 This is where our taxi dropped us.

At the Himalayan Eco Lodge.

After reaching at the ropeway point,  we first proceeded for Skiing : The best experience of our trip. They took 700/person..provided all the equipments and taught the basics of skiing. It was a mindblowing experience one must try. After skiing we took a Chair Lift. The chair lift ropeway ride fulfilled our desire to get onto a ropeway.  It gave us breathtaking views of the Nanda Devi Ranges and the land beneath us completely covered in layers of snow.
Finally we reached The Auli Lake : It was a Paradise Sight! I had never seen a place as beautiful as this. We explored the place for like 2 hours, had fun in snow and then ofcourse a maggie was a must. Had our lunch there at a nearby tea stall who served us the best maggie and the best omlet i've ever had!  After 2 in the afternoon it started getting colder and the winds started blowing fast. So we just got back to where our taxi was waiting for us and then back to joshimath.  And that was the end to a cold freezing day! 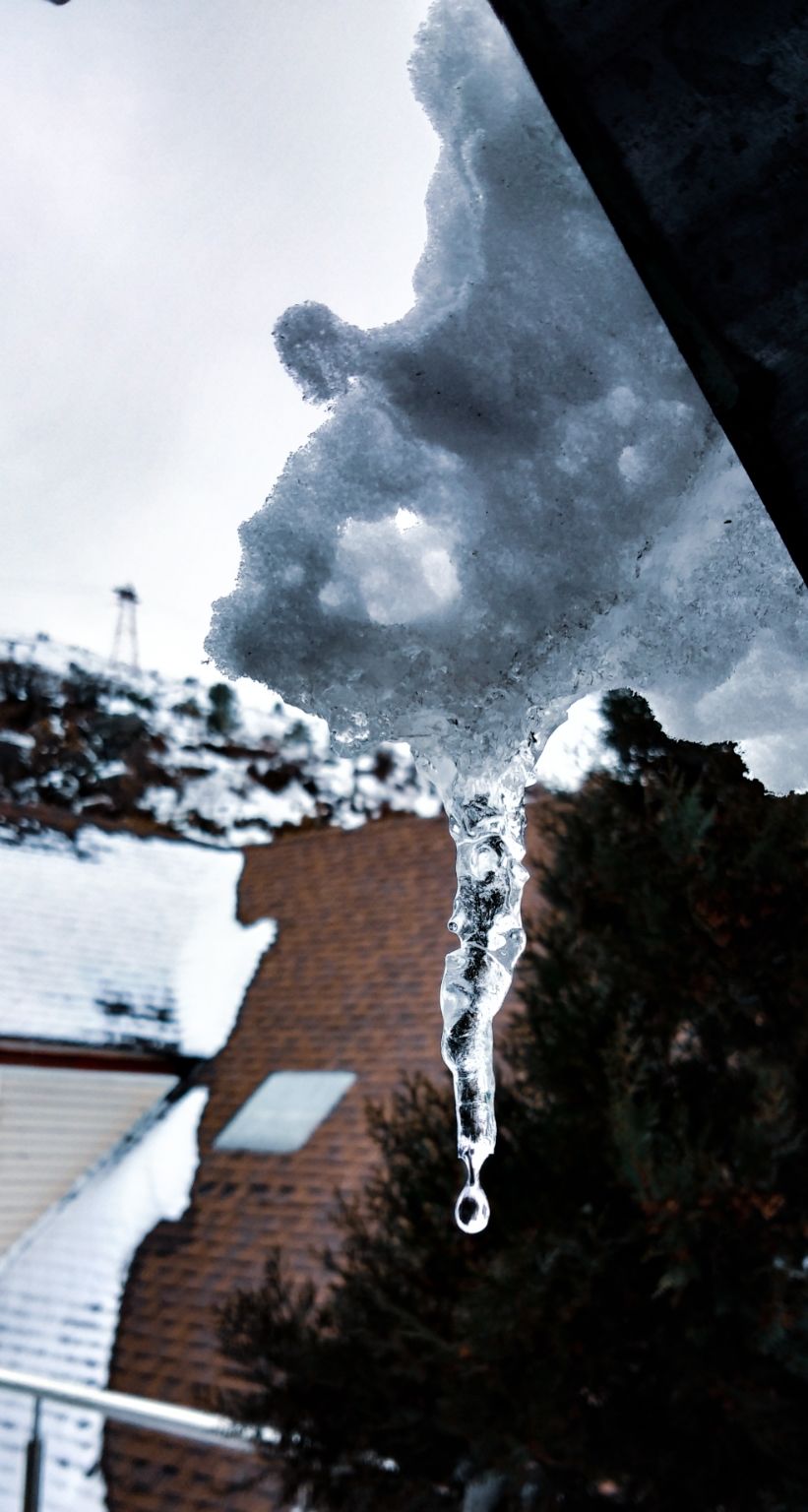 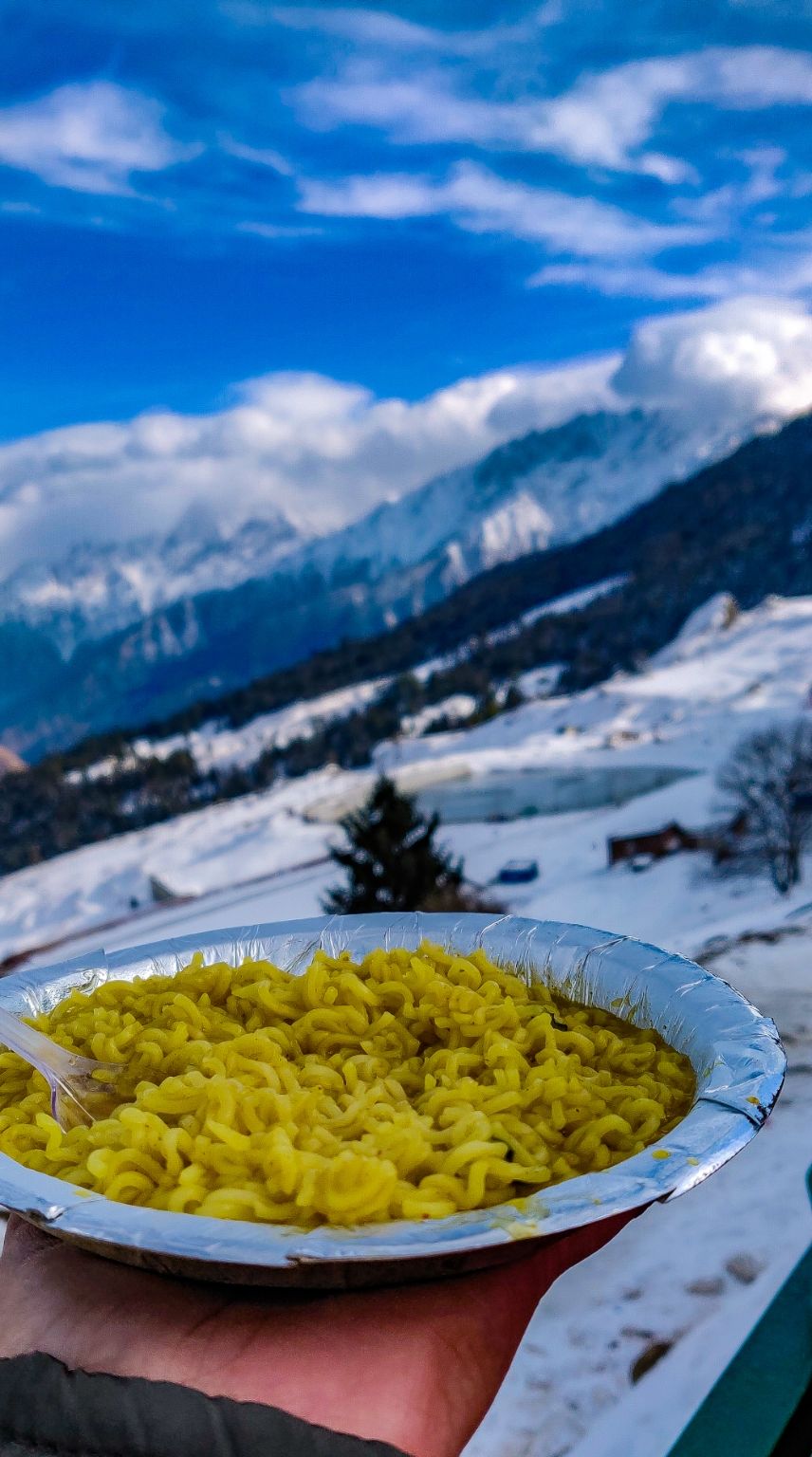 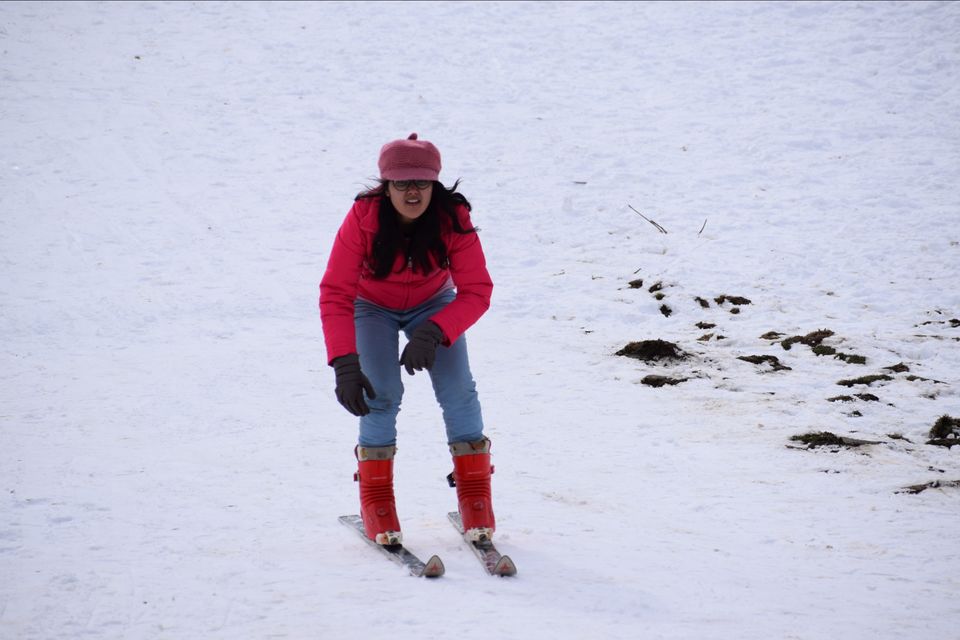 Today was the day of relaxation. Had our breakfast and stayed at the lodge for a while enjoying the beauty of the place for the last time,  making snowman,  and taking pictures with the locals. It was hard saying goodbye to such a beautiful place. We then left auli at 10 am and reached karnaprayag at 1 pm. It was just a night hault and so we didn't have much to do at karnaprayag.

We named him Snuggles 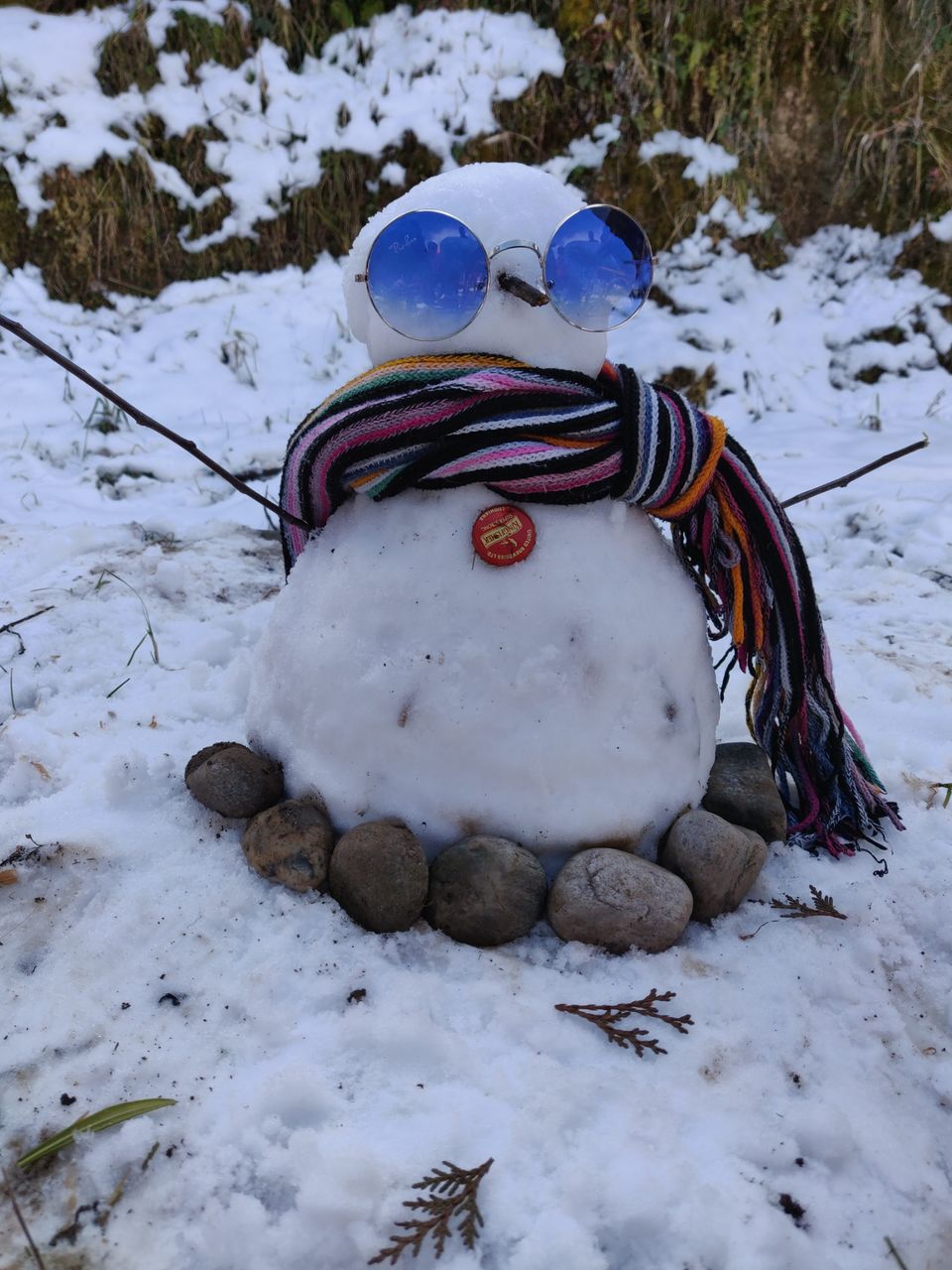 Left karnaprayag at around 7 in the morning. Visited the Adi Badri Temple on our way and then reached Ramnagar in Corbett at around 12 pm. Rest of the day was at Leisure. Our stay was at The Corbett View Resort.  It was a very good resort with good food,  ambience and location and a budget stay too.

It was the last day of our trip.  The safari day.  Our safari was pre booked by our agent.  And our timing was 6 to 8 in the morning at the Bijrani Zone.  And to our great luck we were able to see the Great Royal Bengal Tiger.  It was a 2 minute sight so was unable to take pictures. But it was a great end to our trip as not all visitors get to see the tiger. At 8 am as soon as our safari ended we headed towards Delhi.  Reached there at 2 pm, waiting for our train which was at 8 pm and after an overnight train journey back to Ahmedabad.
A trip to a beautiful place Uttarakhand that i'll never forget!  Our trip cost was overall 20k/person including everything, the cost can still be reduced if you prefer staying at homestays or camps. It was a well planned trip by our agent and everything was preebooked except the outdoor activities.

"We saw the tiger"