Varkala- the quiet land of hippies

For me, it has become a ritual to go on a trip after the semester ends. So we knew we had to go somewhere, and we decided to go to Varkala. We booked our train tickets from Calicut and caught it at 10pm on a thursday. The minute we got into our coach, I passed out with the showering breeze on my face. I almost sleep climbed the upper berth later, which I cannot recall. At 6am, as I was planning to brush my teeth while I was still half-asleep, my friend screamed “Varkala!” and I was like “yeah” and then she panicked — “No! I mean this is Varkala Station!”. I somehow collected my specs, my sling bag and my ear phones…climbed down, pulled my bag out and rannnnnn. The train literally stops at that station for 60 seconds. I knew that this trip was going to be crazy with that mad alert. 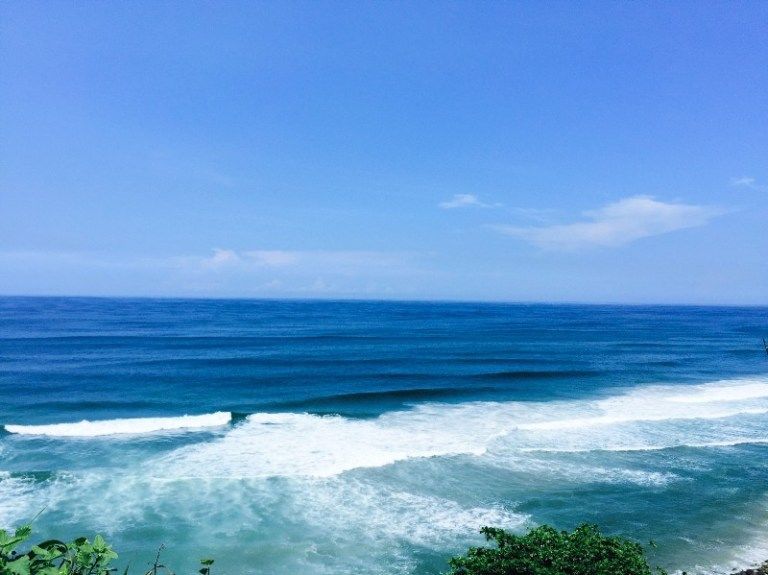 We managed to reach the place we had booked — Vedanta! Wake up! I love their chain of backpacker hostels. I wish it was everywhere in the world. It is extremely clean and they have unbelievably helpful staff. Also, an amazing bunch of people to hang out with. I would totally recommend it for any young person who has a big thing for traveling with a student budget.

We chilled inside for a while, and then got all dressed in our beach clothes and went out. Varkala Cliff is hardly two minutes away from Vedanta. Trust me, the view is just brilliant. The water is so blue that you would want to jump in it right away. We were too hungry to explore, so we ended up at the first cafe at the Cliff entrance — Coffee Temple. It became our second home in Varkala after Vedanta. No matter where we loafed around, we always came back there. You know how they say, home is where your phone automatically connects to its wifi — if that’s true, then, this cafe was our one true home. When I asked a guy in the kitchen for the wifi, he responded “I don’t work here” and I embarrassingly responded “Oh. Shit. Sorry!” and then I figured out the wifi password is actually “idontworkhere” (just in case you plan to go). 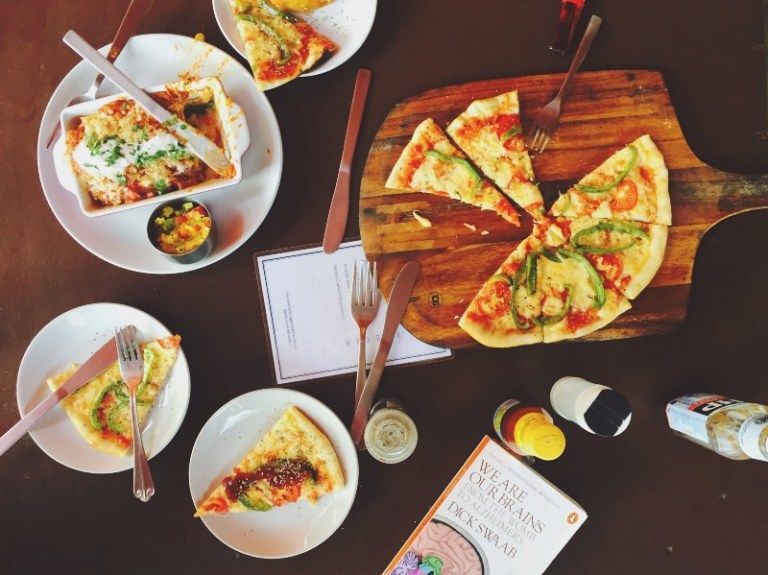 The food is so tasty and well-presented there. We used to eat at least once every day. You can just sit there for hours…listening to random hippies playing flute, watch the sea waves hit the rocks while you enjoy every sip of your Hot Chocolate.

Once we were well-fed, we decided to explore the cliff. We walked and walked until I found this super cool Tibetan Aunty’s shop. I just fell in love with it. Her shop was full of artsy notebooks, fancy accessories and these cool t-shirts cut in funky ways (you know, like the ones you see on these DIY websites and wish to really Do-it-yourself and find yourself too lazy to actually try). She cut out two colorful t-shirts for me, which had Buddhist mantras written on it. I feel like it totally suits my personality. Giving the message: Stay colorful and peaceful. The shop is called Karma. Say hello to that lady, if you ever will to walk till the end of the cliff.

We spent the hot afternoon floating in the cold sea water. Ah! I love how nobody gives a fuck about what you do there. There are only a handful of beaches in India, where you do not have to worry about weird men staring at your namkeen-ness.

(It’s okay if they are coast guards whistling at you. They would scream a random statistic at your face “5 people drowned in past two months”and they would seem quite sure that you are going to contribute to that number.)

We spent most of the evening drying ourselves with beverages, looking at the horizon and spotting ships. We went back to bathe and change into nice clean clothes and returned to the beach. We had dinner at God’s Own Country. I was stunned to find out that the waiter serving us was actually a Mechanical Engineer from Saudi Arabia on a holiday.

We followed the same routine the next day. Woke up and lazed around in Vedanta itself — and finally managed to motivate ourselves to expose to the sun, out of their comfy sofas. Followed by brunch at Coffee Temple, saying Hello to the Tibetan Aunty and swimming in the sea. At night, while booking our return tickets, we couldn’t get the train reservation. We decided to book bus tickets, and found two seats available in two buses each. By the time we finished booking two tickets from the first bus, rest of the tickets got sold out. So my friend and I decided to stay back for an extra night. 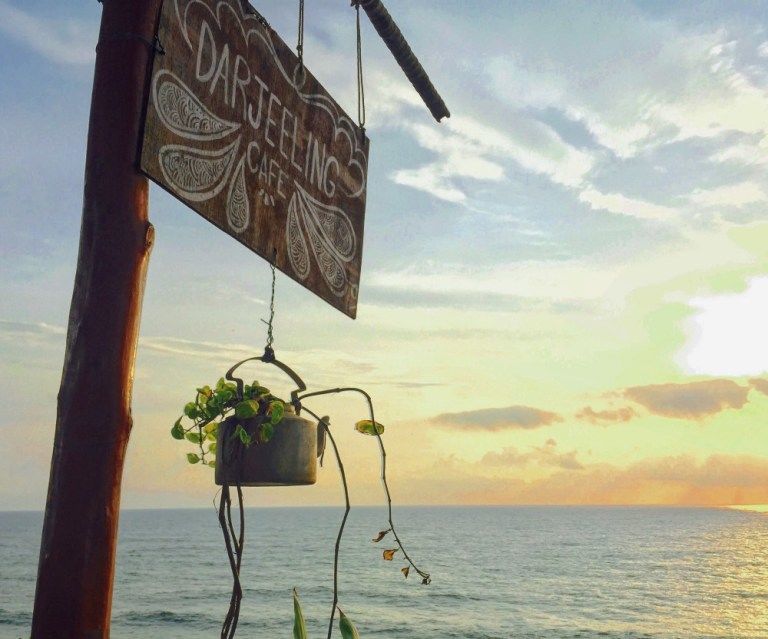 Vedanta provides scooty and bikes on a rental basis. So two of us woke up on our third morning at 6 o’clock. We decided to take the scooty and wander aimlessly in Varkala. Through google maps and our minimal knowledge of Malayalam, we made it till Anjengo Fort which was 16 km from Northcliff.

It was retarded the way those village people looked at us — we were two mad girls wearing short shorts clothes, riding a scooter on a Sunday morning on a street full of churches, talking in Malayalam. We reached three hours before the open time of the Fort, but almost everyone living around that place — women in maxis and men in their munda-came out to help us. They took it as a mission to let us in inside the Fort. They succeeded and the Fort was opened at 8am, rather than its actual timing — 10:30. Honestly, coming from a city famous for its Gwalior Kila and Jai Vilas Mehal, I found Anjengo Fort pointless. The only thing maintained inside the place was its garden.

We found out a beach nearby and rode till there. The water there was cleaner than my water filter. The sand was clearly visible and completely unreliable. It was hard to even stand there and the tides were insanely high. We ducked twice in that ice water and sunbathed under the hot sun. This was the third day and my hair was officially salty and I was undoubtedly tanned as fuck. We had breakfast at some cafe and then once again ended up crashing at Coffee Temple. We spent the entire day shifting tables there, according to the view and the weather. Later that afternoon, I took a Sheero Dhara massage at an Ayurvedic centre. Kerala is famous for its Ayurvedic treatments and massages. Those 40 minutes made me so relaxed. It was totally hallucinogenic (No! I am not exaggerating!).

An Iranian guy who was living there with us asked me for dinner and I took my friend along. There was something mystical about this guy. Even though his English was not fluent, he had an ability to convey his ideas with such good clarity. The dinner had a topping of two ingredients, philosophy and existentialism.

If someone looks at you and says “I hate you!” why does it affect you? If he hates you, it is his problem, not yours. “Okay…but I like myself and I like…you as well” should be your ideal response. Still a long way to reach that level where you can love yourself regardless of others loving you.

Vedanta had planned a drinking party and everyone who was living there was invited. When we returned after dinner, everyone was sitting around a long table with drinks all over the table. There were three Americans, four Germans, One Japanese and three Indians sitting in a circle. It’s ironic that religion and ethnicity divides people, while alcohol and pot unites us. Anyway, we started playing Kings and then, everything else is a history. *tongue out*

Note: Kerala Alcohol brands suck big time, so you better carry some of your own stock.

The night was insane, to keep it short. We slept around 3:30 in the morning, after shoving lime juice and glucose in our mouths. We woke up with an awful hangover.

The fourth and the last day’s morning went listening to the crazy things we managed to do, by everyone, over and over. We left for the cliff and crashed at Coffee Temple for nth time. I spent most of the day time alone, just sitting and chilling, reading Ayn Rand’s Atlas Shrugged and contemplating about life and nature. It was Monday, and half of the crowd was gone. Almost all the shopkeepers became familiar, dogs recognized me and there was a sense of safety. Passers by greeted with smiles and hello’s like it was a small community who had been living together for years at this cliff. 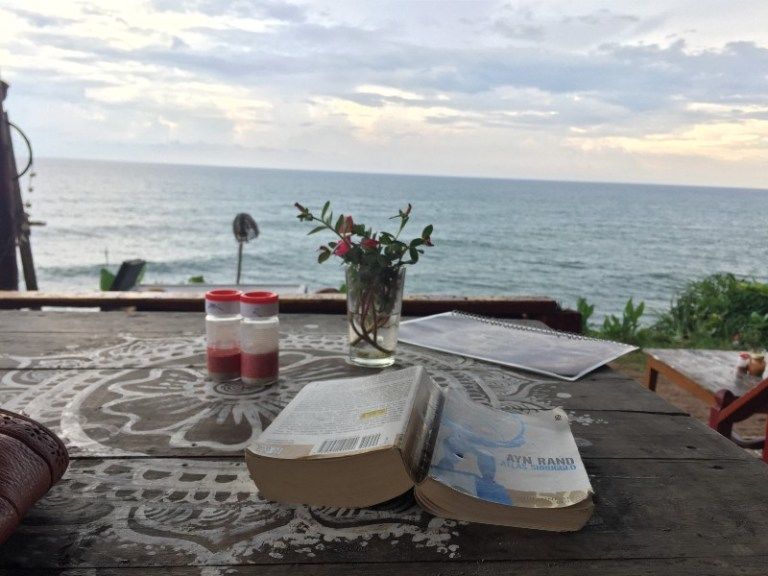 While I was lost in Rand’s loopy use of words, my friend managed to find a way to reach Black Beach. She returned and took me there. We sat there for an hour or so, and sang random songs on the top of our voices. We watched clouds and saw an elephant fighting with an alligator…angels flying…a sleeping dog…shapes forming and dissolving within seconds.

We returned to our place, packed our bags and concluded the fragmented conversations. Vedanta people fed us with all the Maa ka Pyaar they could shower on us and dropped us on scooters to the railway station. It was one hell of a journey.

PS -Women who love to travel alone, or a group of girls who are worried about the safety — you have got to come here!