Journey to India's most haunted place, An architectural marvel lost in time 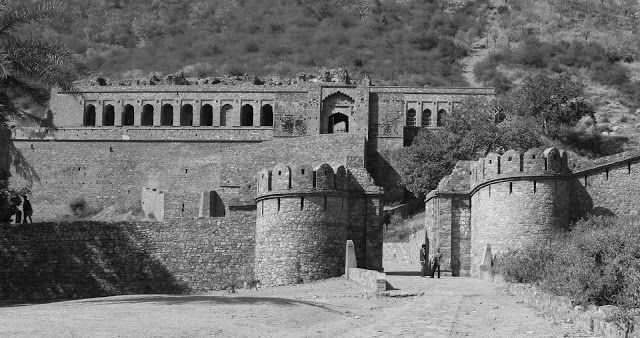 Ghost stories, haunted places, supernatural has always fascinated me and I am sure most of you would feel the same. When you get chance to explore Bhangarh fort, allegedly the most Haunted place in India who wouldn’t be excited?

You search the internet, read news paper article, watch videos. Everyone claiming this fort is the most haunted place in India (irrespective of any proper investigation or evidences). Many believe this fort is home to many spirits and no one dares to enter the fort after sunset. I am not sure what’s the parameter of saying this fort is the “MOST” haunted. Are there any measurement instrument or people who claim, have seen 100 of such places and then tagging Bhangarh as the “Most” haunted?

Anyways, with mixed feeling of excitement, skepticism and curiosity, hardly 2 hrs of drive from Jaipur I reached at the much-hyped destination. Bhangarh fort is situated at the foot of the hills on sloping terrain, its near a village called Bass ka Gola. Founded in 16th century by Raja Bhagwant Das and later it was made capital of Madho Singh (Brother of Raja Man Singh). Madho singh was diwan in the court of Mughal emperor Akbar. It had over 9,000 houses during 17th century which it gradually diminished in population.

With every ancient fort, there will be many folk tales and stories. What makes these ancient fort excited and more adventurous, are the legend associated with it. Bhangarh is no exception. There are two legends, we don’t know which one is true, which one is not but there is one thing in common

As per the first legend claims Madho Singh, when building the Bhangarh fort sought due permission from Guru Bala Nath who lived there. Guru Bala Nath gave his permission but with one condition that the shadow of the fort must never fall upon his home and if it does it would result in the doom. Madho Singh agreed and built the beautiful Bhangarh Fort. However, after many years one of the successors of Madho Singh built fortifications vertically that cast shadow to the abode of the Guru Bala Nath. The fort was doomed within no time.

The second legend and most popular is related to beautiful princess Ratnavati. A local black magician named Singhia fell in love with her. He knew that the match was impossible, so decided to lure the queen with his magical powers. One day Singhia saw princess’s maid in the market. He used his black magic on the oil she was purchasing. Plan was, once Princess Ratnavati use the oil, the black magic will work, Princess will attract and fell in love with Singhia. Princess Ratnavati recognized this trick and threw the oil on to a big stone boulder. The stone boulder rolled towards the magician and crushed him. Before dying Sighia cursed the town, it would end up in a state in which no one could live. Next year there was war between Bhangrah and Ajabgarh, Bhangrah lost the war, Princess perished and from that day the entire fort is in ruins, abounded.

These are two legends but what made this beautiful architectural delight to consider as the India’s most haunted place? Numerous ghostly experiences and happenings in the fort premises as claimed by many visitors or the sign board placed by ASI (Archaeological Survey of India) forbidden the locals and tourists from entering the fort at night. Villagers believe on full moon or new moon days Bhangarh fort, Market area becomes alive and those died villagers assembles exactly same as they were before. Many claimed to hear sound of collision of the sword and the scream of people happened during war time.

It totally depends on a person whether he would believe it or not. I would put down my own thoughts about the place but before that lets take a virtual tour of this fort

Now all we have is the ruins. The remains at bhangarh consist of fort walls, gateways, markets, haveli, temples, royal palace. There are Hanuman, Gopinath, Somesvara, Keshav Rai and Mangla Devi temples, all built in Nagara style of temple architecture. The royal palace is said to have seven storeys but now only four remains.

Now here are my thoughts

Is this fort really haunted?

I will leave this to the PROPER investigation. When I explored the entire fort complex, there were crowd, full of youngster making noise, playing loud music, mocking the legends and asking ghosts to come out. But I did manage to find many isolated area, dark chambers spsly in the basement area and I explored those places alone with just flashlight using my phone camera. My take.. yes this place is spooky, I could feel the eerie silence, complete darkness, stinky smell of bats and what about the energies. Off course it will be there like any other places, like any other forts. Positive or negative? Its all upto you and your belief.

Was I uncomfortable there? Hell No!!! Infact I enjoyed exploring every nook and corner of the fort complex. Will I be uncomfortable during night? Probably yes!!! Not because of rumors but the darkness, emptiness and spookiness. These three combined can lead you to confusion, create illusion and reduce your ability to rule out normal possibilities.

The sign board hyped the matter too much and people thinks this warning is because of Ghosts. ASI has forbidden the locals and tourists from entering the fort at night. I can laugh, at the claim made by many because of this sign board that its legally haunted and Govt’s official warning of haunted place. But the truth is, there is a tiger reserve forest nearby (Sariska National Park). It's very common for tigers and other wild animals to roam inside the fort area during night.

The warning in signboard is the rule of ASI, which is valid for just any other monument. How many ancient forts, ruins and heritage sites in India are, allowed to roam inside in the night hours? What’s the closing hours of Golkunda fort in Hyderabad, Jaigarh Fort in Jaipur or Red fort in Delhi? Most of these ancient fort closes by 5:30 or 6 PM, after sunset. Are all these haunted? Isn’t there any signboard? Only one thing I would expect from ASI that mention the timing (Like they do for all heritage sites) rather than using words like “Sunrise” or “Sunset”. But that’s how ASI works, these sign boards are way too old and no maintenance. Another reason it could for villagers to stay away during night hours.

Anyone who enters the fort at night would not be able to return in the morning?

Cant stop laughing at claims like these. There are many who spent nights at Bhangarh (Legally or illegally, that’s different thing). Watch the you tube videos, many bloggers were there, many TV shoots were done, many news channels did the reporting during night hours. Arent they still alive? How many death cases you have heard? Are there any news articles reporting unnatural death in Bhangrah after spending night? My only worry is people spreading lies and rumors without verifying the facts. Hope common sense prevails.

The truth is now Bhangarh is tourist hotspot, gaining some commercial mileage now a days. The day I visited I could see 50-60 cars lined up and 3 buses full of tourists, just to feel the spookiness. You will find many villagers inside the fort, roaming, feeding goats, collecting woods from jungle. My impression of Bhangrah was a deserted fort in middle of no-where was long gone, what I see numbers of resorts, hotels and eatery around and started thinking how ghost stories can be easily commercialized. Think about any ruins or abandoned places in night which has overgrown banyan trees and wildlife around. How easy for us to tag those places haunted.

Thoughts of local, villagers about the fort?

When I was taking pictures of Shiva temple inside the fort complex, I saw a 10 year local kid there. I didn’t want to ask him about anything related to haunted stories, so I asked where they live? He told the village nearby, then I asked - raat me koun rahta hai yaha.He said – Koi nahi , I asked why and then he replied – sher aata hai raat ko yaha.

My local cab driver was pretty much convinced that fort is haunted and narrated the story of Rani Ratnavati. He himself explored the fort multiple times and told me that he had felt negative energy there.

Many people, many belief. True or false, facts or rumors. I dont know.

Is Bhangrah haunted…May be.. but this beautiful place should be treated with equal respect as any other historic monument. Every ruin has its own charm. Bhangrah is no exception but things I like is the serene atmosphere, picturesque Aravalli mountains and most important the architectural marvel that it is.