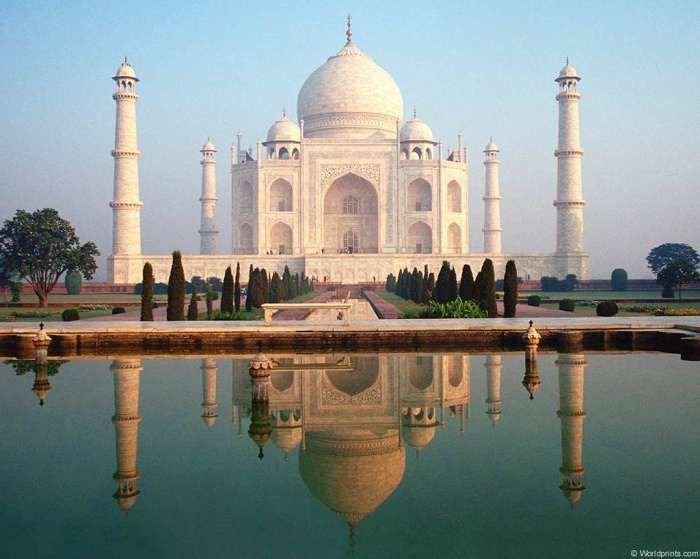 My long cherished dream of visiting the national capital with family, coupled with a ‘dekho’ of the only one among the world wonders in India, the Taj Mahal (Agra) came true last August. Though I had gone there once, couple of decades ago, the latest trip is memorable. Left with barely 4 days to cover both the jaunts, we had to naturally opt for the air mode, curbing my desire for a train journey that gives a glimpse of several cultures while passing through not one or two but six states enroute. My regular travel agent arranged a nice trip at economical cost. Boarding an early morning flight from the Kempegowda airport at Bengaluru, we landed at Delhi sharp 7.30 AM. Chilly weather welcomed us rather than the cab driver. Somehow we spotted the cab and reached the Hotel at Karol Bagh, the busy locality at the heart of the city. Finished the morning ablutions and breakfast and got off to a curious start on Tata Sumo.

First we went straight to

- the nearby Birla Mandir (Laxminarayan temple) where Gandhiji used to frequent, followed by

- Indira Gandhi memorial. Inside the memorial, one can see all things used by her, including the torn sari she wore on the day of the assassination. Her sitting room, visitors place, her library, beautiful garden outside, all makes the visit really worthy. My eyes literally filled with tears seeing the spot where she was shot at. She was the real ‘man’ India saw among its prime ministers whom my mother was very fond of.

- We then straight went to Mehrauli, to see the 9-centuries-old Qutub Minar, a giant structure, now a UNESCO heritage site. This lofty, 240 ft height minarate can be viewed from a distance. Earlier, tourists were allowed entry inside, to reach the top point via a spiral staircase. But owing to a mishap occurred few years ago, entry is stopped now. But fetching Entry Tickets there (to view the outer area and the adjoining park) took away almost two hours, as there was heavy queue since the day was a Govt. holiday. Camera clicked several photos of us with the Minar background.

- The next place on the itinerary was Bahai (Lotus) temple, few yards away from the KalkaJI station. It is called Lotus temple as the entire building resembles petals of a lotus, so beautifully structured. Bahai, originated in Persia, is not a religion as such, with no specific worship. It promulgates monotheism and engulfs whole of humanity as one. Spread over a vast area with greenery all around, it has a centre structure (for the prayer) surrounded by water pond throughout. The area is well maintained.

- The day’s tour wound up at the India Gate, the gigantic 42 mtr high building on the Rajpath - a war memorial built to commemorate thousands of soldiers who laid down their lives during World War I. A ‘jyothi’ (Amar Jawan) is made to burn 24x7 to enliven the noble spirit of war soldiers.

- 2nd day, we were taken to the Rashtrapathi Bhawan and Parliament House, but we could see only from outside while on the move on our own vehicle, as they are prohibited areas with no entry for outsiders. We had seen Parliament Bhawan everyday but only on TVs while sessions were going on inside. This is the place from where the whole country is administered. Its lofty corridors make spectacular vision.

- Our next stop was at Juma Masjid, where even foreigners come in herds to view the imposing structure.

- Moving on to Red Fort, appropriately called Lal QUila in Hindi, as the name itself suggests, looks fully red as it is built of red stone. From the outer gate, one can reach the inner part by getting into a patt-patti – a huge size autorickshaw with two wooden planks fixed facing each other, to accommodate minimum 10 to 12 passengers at a time - a most economical transport mode popular in Delhi OR share-auto what we call here in the South. Moving on, one can see the high pedestal dias from where the Prime Minister addresses the nation on the Independence Day. Many historical events covering the country’s independence movement are captured in photography and exhibited at the 2/3 museums around the path way.

- Later half of the second day, we moved on to Akshardham temple at Pandav Nagar. The shrine built out of marble and sandstone is dedicated to the spiritual Guru Swamy Narayan of Gujarat. Spread over a vast expanse, the Mandir is close to Metro Station which is why people easily throng the place all through the day. A not-to-miss event there is the musical, multi media water show held at the step-well adjacent to the Mandir complex each evening. This 20 to 25 minute extravaganza is merrily enjoyed by one and all. Entry ticket : Rs.80 per head. Well managed vegetarian eateries to the right of the Mandir quench the thirst and hunger of the devotees, of course for a price.

- 3rd and the penultimate day of the trip we dedicated to Agra, to view the ecstatic Taj. Wah Taj! We feel proud to have on our soil one of the seven wonders of the world. The super speciality Highway – a 3-hour drive from Delhi – takes us to Agra, via Greater Noida. The ivory mausoleum Taj, built by Moghul ruler Shah Jahan in memory of his late Begum Mumtaz, tops the list of places we saw since past two days. Cool breeze coming over Yamuna river that quietly flows behind, gives an ultimate view of the Taj. Our eyes could bounteously fill in the beauty of the place. Its captivating view around, especially on a moon-lit night would be spectacular. But for the heavy crowd, we could really enjoy slowly walking all over the place. Feasting our eyes over the wonders we saw both at Delhi and Agra we bid goodbye while boarding the flight back to our place, but not before buying plenty of ‘peta’ sweets the Agra city is known for.