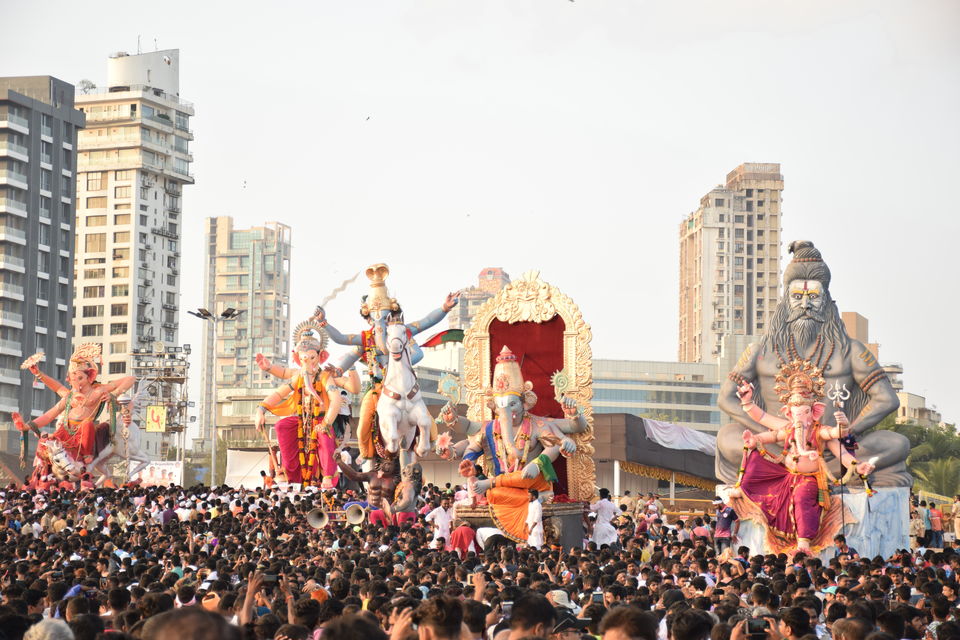 The festive season is at our doorsteps and it begins with the arrival of everyone’s favorite God, Lord Ganesh. After mellowed down celebrations last year, maximum city is all set to welcome Lord Ganesh with COVID SOPs in its place.

While all eyes are set on the very popular Lalbaug Cha Raja, which will be celebrating the festival in its 87th year, very few people know that Sarvajanik Ganesh Utsav in Mumbai started dates 130 years back, almost 40 years prior to the establishment of Lalbaug Cha Raja.

We take a look at some of Mumbai’s best Ganesh Pandals, which you can choose for Pandal Hopping with your friends and family (keeping in mind COVID Protocols), some showcasing exquisite decors, some extravagant on idols and some just maintaining the tradition.

When Bal Gangadhar Tilak called for organizing Sarvajanik Ganesh Utsav, residents of Keshavji Naik Chawl were among the first ones to respond to the call. Established in 1893, within the narrow allies of Girgaon, houses the oldest Ganesh pandal of Mumbai.

The pandal sticks to tradition with a simple clay idol, minimalistic design and floral decors, and it stands out from the rest as a place that has managed to stay out of bounds from the grasps of commercialization.

One can definitely experience peace at this place as the fragrance of the incense fills up the surroundings. A must visit place for anyone who wants to experience a traditional Ganesh Festival.

Sitting right next to Keshavji Naik Chawl is another famous place that should be on your pandal hopping list. Known as Girgaon Cha Raja, the Nikadwari Lane Sarvajanik Ganeshotsav Mandal have always been vocal for environment friendly celebration.

"Girgaoncha Raja was established in 1928. At that time the idol was just 8 feet tall. Today it stands at 22 feet. Since 1928 till date, the idol is made of clay," says Ganesh Mahadev Lingayat from the mandal."

The idol is beautifully adorned with the traditional Maharashtrian Pheta (Turban), which has become its identity over the years.

Right next to the famous Lalbaug cha Raja, in Ganesh Gully, sits Lalbaug Sarvajanik Mandal's Mumbai Cha Raja. Known for 18-20 feet tall idols, the organizers have been following a temple theme, and Lord Ganesh in Avatar of the primary deity of the temple.

The organizers have been diligent in decors of the hallways leading up to the main idol. It actually gives the feel of transcending to am altogether different universe. The photos show Mumbai Cha Raja in 2018 in Surya Avatar with backdrop of Konark's Sun Temple.

Only a 100 years young, the Chinchpokli cha Chintamani sits comfortably in a nook under the Chinchpokli flyover. Over the years, it has grown its own loyal fan base as devotees cram the small lanes leading up to the deity. The arrival of the God is celebrated with great pomp and gaiety, which is an experience in itself.

The decors are of a magnanimous royal darbar with Lord Ganesh sitting at the throne in the centre of the hall. The decorations are very elaborate and are extremely pleasing to the eyes. There is an amazing vibe to place as well.

The Goud Saraswat Brahmin (GSB) Seva Mandal in Matunga's King's Circle is touted to be the richest Mandal in the city and every year they showcase the Ganpati in the most ostentatious way, adorned in gold and silver ornaments.

It is an absolute delight to witness such a spectacle, and people come to visit this pandal from far off places for seeking the blessings.

Apart from these famous pandals, there are hundreds of other pandals that organize the festival with same enthusiasm and parade. Sharing a few pictures from places we passed by on our way to these popular places.

If you are going on pandal hopping, ensure you abide by the SOPs laid out by the government and the organizers. Wishing everyone a great festive season with hope and prayer to Lord Ganesh that he will remove all the obstacles from our path and bring back the world to its normal self.