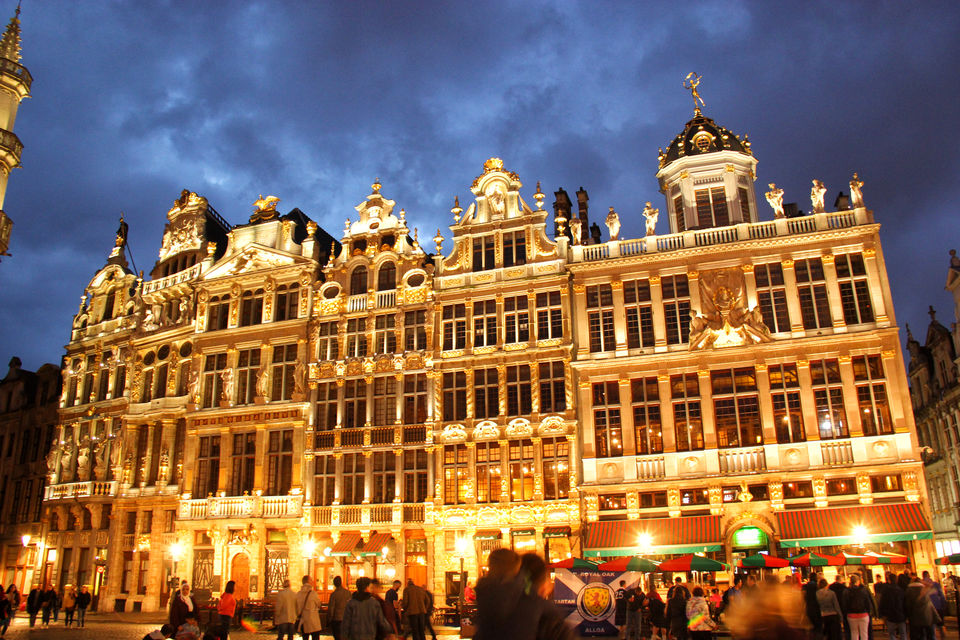 48 hours and our time in Amsterdam was up. And this is the problem we employed people face when we are out for a tour. So many places to see and no time to spend seeing the places!

Anyways, we started our journey early. We had our GVB passes purchased valid till about noon. So we took the tram to Amsterdam Central which took less than 2 minutes. Then we had to navigate our was to catch the metro to get to Duivendrecht station and take our bus to Brussels.

For our inter Schengen transport we used the services of omio, previously known as goeuro. We found that there are flights, buses and trains from Amsterdam to Brussels. Busses were the cheapest option with ticket prices at around 11 USD per person. Trains tickets were around 4 times the price and time of journey was the same, around 3.30 hours to 4.00 hours.

The bus station is merely a 100 meters walk from the metro station. We had taken the services of Eurolines. There mainly 3 bus operators in Europe. Flixbus, Oui Bus and Eurolines. At the time of booking eurolines was the cheapest. The bus started from Amsterdam at 10am. Time to reach Brussels 3.30 hours. The bus journey was a pretty normal ride as we have in India, but somewhat smoother. The bus took a stop of around 20-30 minutes for food and restroom at a Mcdonalds. One thing to mention is that the rest rooms are not free. Even if you are having food in the restaurant, still you have to pay to use the restroom.

Anyways our bus reached Brussels Nord on time and then it continued its journey to London. We got off and moved to the metro station. The metro station was just a 50 meter walk from the bus stop. Our Bnb was located 100 meter from De Brouckère tram station. We selected the location as it was very close to the Grand place.

So we took Single journey tickets which costs 2.1 Euro. After reaching De Brouckere, we checked in our Bnb. We were given the codes for the electronic locks and we entered the room easily.

After freshening up we were ready to explore the area. We had heard a lot about the Belgian brewed Beers so decided to get taste upfront. On the way from our Bnb to Grand place, there was a plethora of Bars, filled with people all around the globe. We found our spot and order some genuine Belgian brew. Afterwards we were on the way to Grand place. A few minutes from the grand place is the statue of Small boy pissing, known as Maneken Piss. It is very popular with tourist and locals. As the story goes, the boy had saved the city by pissing on the explosives set by enemies and thus diffusing the bombs.

We spend the evening enjoying the sights and sounds of the grand Place. Street performers, musicians had setup the atmosphere.

One thing what we noticed was the number of illegal immigrants living on the streets and begging for a living. It is really an unusual sight to beggars in any European country.

Anyways it was already 10pm, so we decided to call off the day and returned to our room, had our dinner and thus our first day in Brussels ended.

Our 2nd day in Brussels. We started at 10am. We bought the day pass for the transport which cost 7.8 euros. Our plan was visit the Atomium and much hyped Mini Europe. After a journey of around 30 minutes and changing trains 1 times we reached the Atomium.

Then it was time for Mini Europe. But we were thoroughly disappointed. For a Entry fees of 15 euros per person there is nothing special as such. All the countries with their landmarks made in a miniature form. Nothing else. It may be appealing to kids but for us it was a complete waste. Still we went over all the miniature models and then decided to explore the central area.

We visited the St Michael and St Gudula Cathedral, and some more places in the area.

A friend of mine who stays in Brussels paid us a visit in the evening. He suggested us to spend some time at The Delirium Café, a bar with boast of having more than 2000 kinds of Beer!! And oh boy what an evening it was, the vibe of the whole place was electrifying. A group from Scotland I suppose started playing their bag pipe and singing.

I would highly recommend anyone visiting with friends in Brussels to visit this place at least once. After spending a few hours and savoring the taste of god knows how many flavors of beer, we again went to Grand place to spend the rest of the evening. Although we could not cover a lot of places in Brussels, but roaming around in the streets seeing 14thcentury architecture all around made the visit worthwhile.