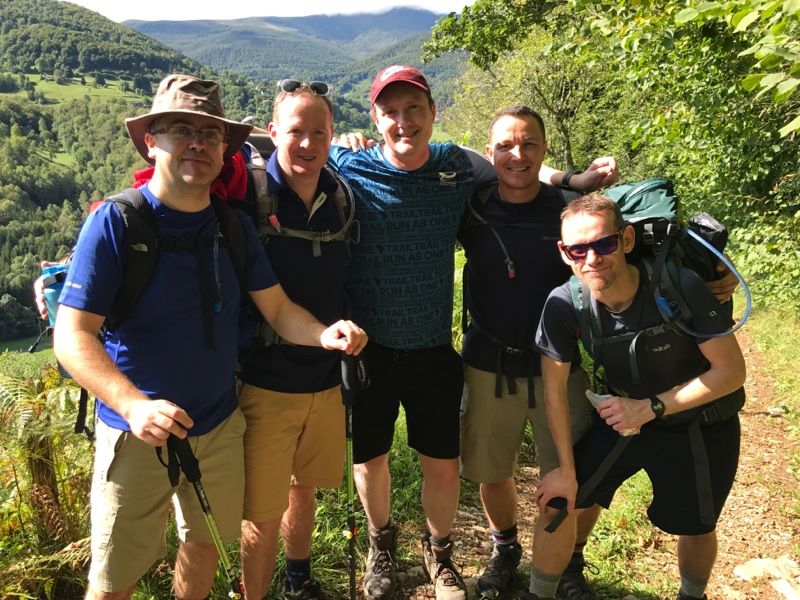 The ‘Chemin de la Liberte' was the toughest of several escape routes across the Pyrenees during the Second World War. Commonly referred to as the Freedom Trail, the route begins in Saint-Girons in the Ariege district of France and ends close to the village of Isil in Spain, and can now be completed as a challenging four day hike. Having read the book 'Cruel Crossing' by Edward Stourton, I was eager to walk the route used my many of those trying to escape Nazi tyranny during the Second World War. Like many other BBC journalists of his generation, Ed Stourton is obsessed with the Second World War. Cruel Crossing is the book of a Radio 4 series in which he recreates the crossing of the Pyrenees by thousands of desperate people escaping the prison that was occupied Europe.

During the Second World War thousands of French civilians, resistance fighters and European Jews attempted to escape Nazi tyranny on the Chemin de la Liberte'. Sadly many failed. They were either captured, shot, betrayed or simply too weak to complete their walk to freedom. It is important to remember that most of those who climbed through the Pyrenees during the Second World War were malnourished and exhausted after weeks on the run hiding in barns and attics. They were malnourished, poorly dressed and weakened by a lack of food and sleep. Forced to travel at night to evade detection, those on the Chemin de la Liberte tackled what modern walkers are only advised to do under the most advantageous of conditions.

Nowadays hikers are advised to attempt the Chemin de la Liberte with an experienced guide and only during the summer months of July to September. The Freedom refugees had no choice but to brave the elements at all times of year often in dangerous conditions. Many of them would have been without a guide, compass, map or safety equipment. It is, however, testament to their bravery that so many allied forces, civilians and Jewish refugees did make the crossing and survived the trail to freedom.

My journey began with an overnight stay in Saint-Girons. After meeting up with the rest of the group we spent some time with our guide as he explained to us more about what we could expect to face over the next four days. We then had an amazing dinner at a small restaurant tucked away down a side street. I am always amazed how even the smallest most unassuming restaurants in rural France can turn out the most amazing, mouth watering food. My sleeping quarters for the night was a chateau requisitioned by the Germans during the Second World War and situated on the aptly named 'Avenue de la Resistance'.

Our starting point the next morning was the Pont le Chemin de la Liberte. It was at this bridge that the train driver sounded his whistle for the escapees to jump from the moving train where they were then collected by the French resistance fighters and hurried into the woods. The escapees would walk this whole route in the night to ensure that they were not seen. This first day was a long one consisting of approximately 29kms. Our guide informed us that that it would not be a hard day and that the terrain would consist mostly of what he termed "gently undulating hills". I quickly discovered that what constitutes a hill in the Pyrenees is what we back home in South Africa call a mountain! I found the first day emotionally moving. We came across several plagues and memorials dedicated to Resistance fighters who were executed by the Nazis.

After a long day’s walk we made our way up to our first night's accommodation in Aunac (766m). Here we spent the night in a gite set high up on the hillside with breathtaking views across the Ariège. The gite is run by Francois and Claudine who prepared us a mouthwatering dinner with vegetables from their own garden and locally sourced meat. We were also able to have a lovely warm shower, which makes a huge difference after a long day's slog.

After breakfast we left the gite at Aunac and continued on our route over the Pyrenees towards 'freedom' and Spain. We walked through bracken and beech forests which provided us with some welcome shade. Later in the morning we encountered some steep uphill sections which left me breathless. Continuing onwards we walked along a section of the famous GR10 to the Col de la Core. Here, we rendezvoused with our support driver and our bags for one last time before we committed to the high mountain. We then cut south under the Crete de Balame, climbing for another couple of hours until we reached the cabane Subera (1499m) nestled by the rock wall of the Cirque de Lameza.

The cabane, though simple, has several bunks and a fireplace. A nearby stream allowed the braver of us with an opportunity to wash. The views across the valley below were spectacular.

Leaving the cabane in the mist early the next morning we began our hardest day. The mixed weather was to be expected in a mountain environment and added both atmosphere and challenge to the route. Along the way we paid our respects to the crew of a Halifax bomber, which crashed into Pic de Lampau. Remains of the wreckage still litter the ground and there is a simple memorial plaque set in the rock close by. We were asked by our guide not to touch or interfere with the wreckage.

Leaving this site we continued upwards to reach the Col de Craberous (2382m). Here we enjoyed some spectacular views while we stopped for a breather before another steep descent of 300m to another small cabane where we were able to resupply ourselves with water. After a succession of lakes we started climbing up again, initially through boulders, until long granite slabs lead us to the Col de Pouech (2494m). The mist prevented us from being able to see the Refuge d’Estagnous (2245m) below us. After a short walk we reached the Refuge where we were able to enjoy a hot shower and a couple of cold beers.

Early the next morning we left the Refuge and descended to Lac Rond, before climbing again upwards again. A narrow path leads up by the side of a waterfall and then traverses left to meet the Etang Long. Although a little exposed, this is a short stretch and there are cables in place. Having said that I do have a fear of heights and although this was a short stretch I found it quite challenging.

After a short break we begin the last push to the Frontier Col at 2522m. Although no one stopped us to check our passports we were advised to have them with us. We crossed into Spain and enjoyed the long descent to the Noguera Palaresa River. We followed the river to the end of our walk at the Refuge del Fortet. Here we were met by our pick up vehicles and transferred a short distance to the village of Arties where enjoyed a couple of well-earned beers with some mouth watering tapas. After savouring every mouthwatering morsel we jumped back into our vehicles for a quick one hour journey back into France and the lodge near Luchon where we were staying.

The extra rest day in Luchon was perfect. It was great to be able to walk around the town and stretch your legs without having a rucksack on your back. There are some fantastic restaurants and bars and it was great being able to sit down to a nice lunch. Well known for its warm thermal baths, there is a lot to do in Luchon and I look forward to visiting it again.

Having now experienced the walk I am in complete awe of the efforts, courage and stamina of those who made the cruel crossing all those years ago. My walk to freedom was an experience of a lifetime. It combined a challenging walk with a unique historical perspective and magnificent natural beauty.

Our guide added considerable value to the experience. His knowledge of the terrain and weather conditions was impeccable and his larger than life personality made even the toughest moments enjoyable.