Srinagar - The Royal Crown of India 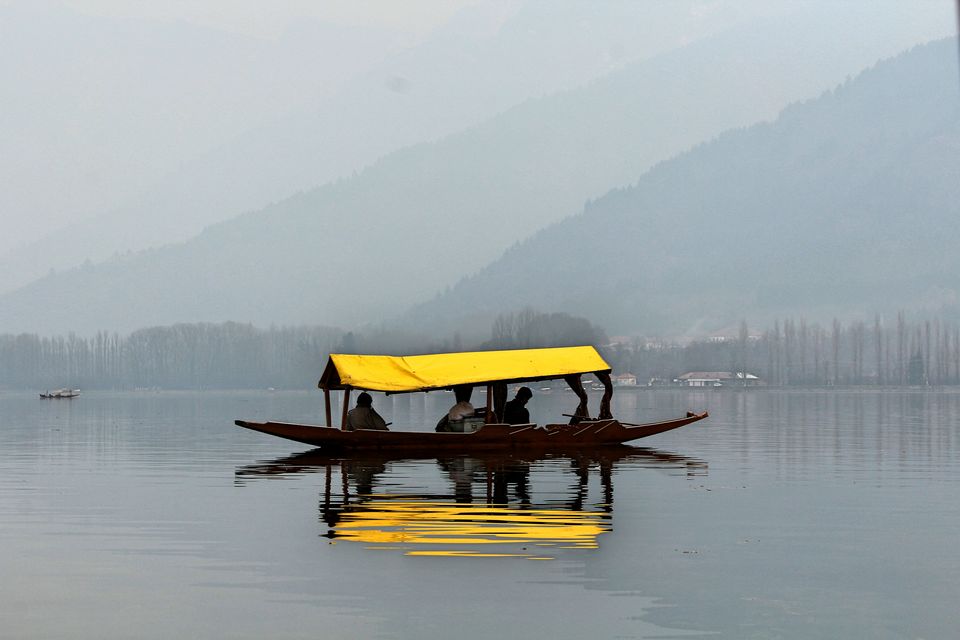 Srinagar can easily be named as Royal crown of India, as all the attractions here are synonyms for the royalty enchanted by Mughals during their reign in the past. Srinagar has all royalty in its kitty, from Crown of Srinagar (Shalimar Bagh) to Jewel in the Crown of Srinagar (Dal Lake) and from Angel’s Abode (Pari Mahal) to Chashme Shahi (Royal Spring), it is all royalty in this city.

Travelling all the way from Bangalore to Delhi and then a day out in Amritsar, we had alighted in Jammu early morning at 6.30 a.m. The Bhatinda Jammu Tawi express had reached its destination Jammu on time and it was freezing cold in the railway station. The train journey had already started its impact on us and we were really enough of trains for now and made ourselves towards the exit and boarded a local traveller to Jammu bus station. Once we reached the bus stand in Jammu, we could find few drivers calling the people who were waiting for a bus to go to Srinagar. As we also had luggage with us to carry we decided to get on the taxi for Srinagar. The entire day was an awesome feel to travel as the stretch itself was a refreshing and turned out to be a destination for us. Details can be found in my previous blog “Rupees 250 tariff paid to travel from Jammu to Kashmir”.

By the time we reached Srinagar, we had made a good friend of the driver and decided to book the same taxi for our entire trip in Kashmir and also to get back in the same taxi to Jammu. In fact he also helped us to get a hotel room in Srinagar also. After travelling for an entire day along with the mountains everywhere we had made it to Srinagar by 7.30 p.m. in the night. With a body full of pain and no good sleep for last 4 nights (as we had our travel planned in such a way that we slept 3 nights in train and one night in a bus) we went to sleep post dinner.

The very first morning of our stay in Srinagar was high on cold as it was mid-January, and we were ready with our taxi for our first destination. The first place the guy took us was to Pari Mahal which is located 13 kms from Srinagar. Also called as The Angel’s Abode, this seven terraced garden is located at the top of Zabarwan mountain range overlooking the Srinagar city. This is built with the Islamic architecture which depicts the patronage of art during the reign of Shah Jahan. The garden was built in mid 1600s by Mughal Prince Dara Shirokh. The garden is set amidst the mountains with devdar tress all around and also gives a good view of Dal Lake from a far distance. The entire place was empty as it was in the early morning and also it was an off season in January due to winters.

After spending an hour around Pari Mahal our next place to go was Chashme Shahi or Chashma I Shahi, also called as s Royal spring. This place is hardly a 5 minute drive from Pari Mahal and was built by Ali Mardan Khan around a spring in 1632 AD. The place has a two storeyed hut kind of structure built around the spring and the garden is spread around an acre and hence is the smallest of the 3 Mughal gardens in Srinagar. This place was also free form tourists and the weather had turned to be freezing combined with high speed winds which made us to go back to our hotel. Later, we also finished our breakfast in Krishna Vasihno Dhaba, a famous vegetarian restaurant in Srinagar.

By this time it was 11.30 a.m. and we headed to HazratBal mosque which is located hardly 8 kms from Srinagar. The place was quiet and calm, and we spent around 30 minutes in this place. One can find a relic in the mosque which is believed by many of them to be a hair of Prophet Muhammad.

After mosque we headed towards the Mughal garden, the Shalimar Bhag or a Shalimar garden which is considered as the high point of Mughal horticulture. It is said that the garden was built by the Mughal emperor Jahangir to his wife Noor Jahan in 1619 and is also called a ‘Crown of Srinagar’. The garden was not that green as compared it would be in autumn as it was cool and also about to snow in Kashmir when we visited the place. The entire garden is set in around 12.5 hectares of land and has the humongous Dal Lake in front of it as the Lake can be seen from any part of the garden. This also show cases the engineering credibility of people in the past.

From here our next destination was to the infamous Dal Lake, which is the main land mark of Srinagar. This is also famous as ‘Jewel in the crown of Kashmir’ and is the second largest Lake in the state. This Lake has a shore line of 15.5 kms with Mughal gardens, floating gardens, Char Chinars, Almond gardens, small islands, house boats, parks and also small restaurants built adjacent to it. The Lake itself seems like a mini city in Srinagar, always busy with boats filled with people selling handicrafts, handmade jewels, photographers and many more. This 18 square Kilometre Lake is so massive that it is always better to take a Shikara ride to go around the lake and feel the pristine beauty of Kashmir from Lake. We could witness numerous hotels on boats with sky touching prizes from normal house boats to luxurious boats with huge boards in front of them to attract tourists. We could also see small petty shops and medical stores floating in the Lake. Towards the periphery on the west side there was a water fountain also which demanded few snaps from my camera. With all this the Zabarwan mountain ranges in the far were the main attractions and also the misty noon as a result of winters kept our vision busy throughout our ride in the Shikara.

Our next and the last destination was to the Shankaracharya temple in the south east of Srinagar. It was already evening 4.30 by the time we reached the top of the mountain and we only had an hour left with the sun light and also clouds were forming in the sky. The temple is completely surrounded by blocks made of stones and the stairs to the temple premises on the top of the hill are so steep to climb. The hill is called as Shankaracharya hill or Gopadari hill. It is said that the saint Shankaracharya had visited this temple and stayed here for few days. The entire premises is guarded by army personnel 24*7 and a good view of the entire Srinagar city can be seen from the top of the hill.

After our visit to the temple we had a brisk view of the sunset as clouds played a major role in hiding the sun from being seen. Later in the evening we roamed around the city watching people passing by and lots of people with fire lit at the side of the road to warm themselves from the bone chilling cold.