#saveourtigers project where Aircel and WTI 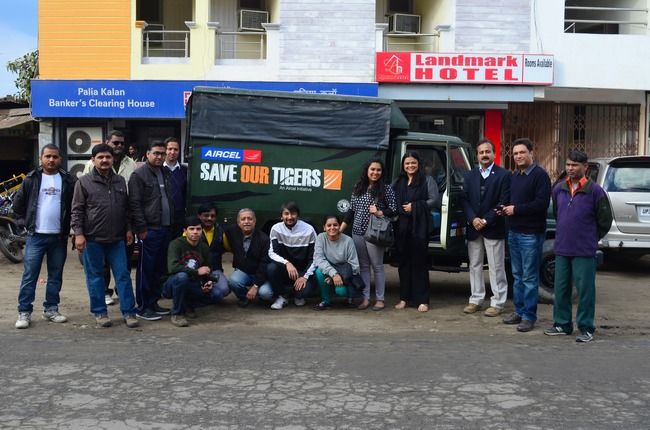 One foggy morning in Palia 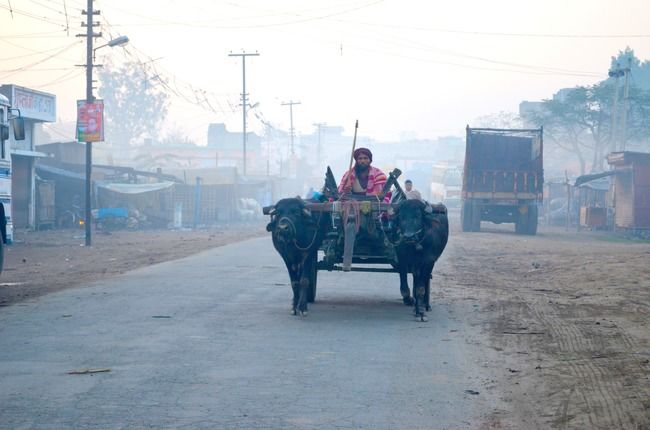 The overwhelming fog was all around us 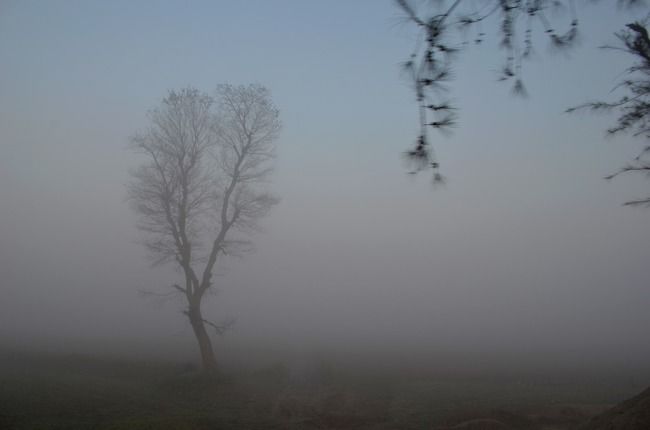 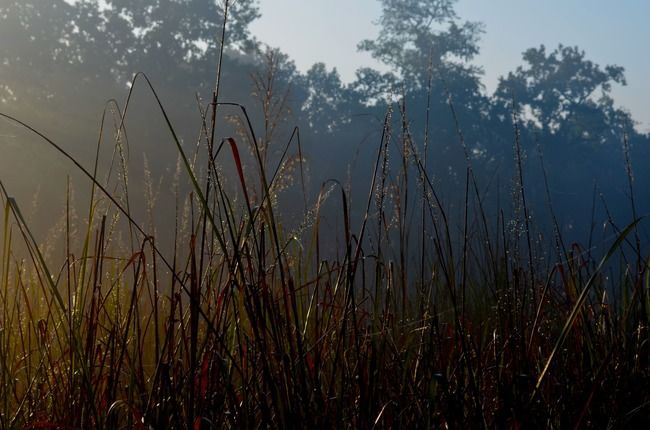 The Rhino we sighted 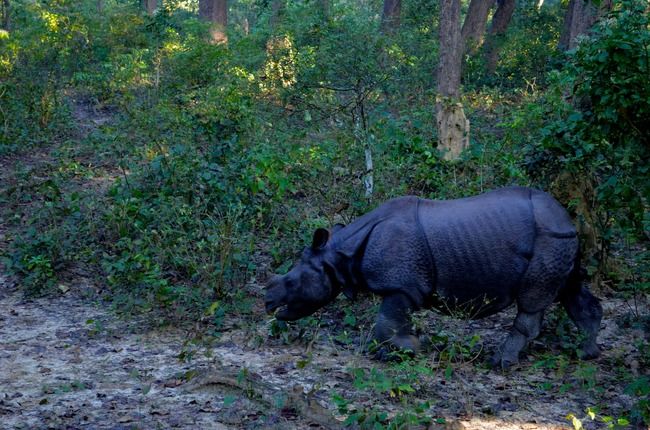 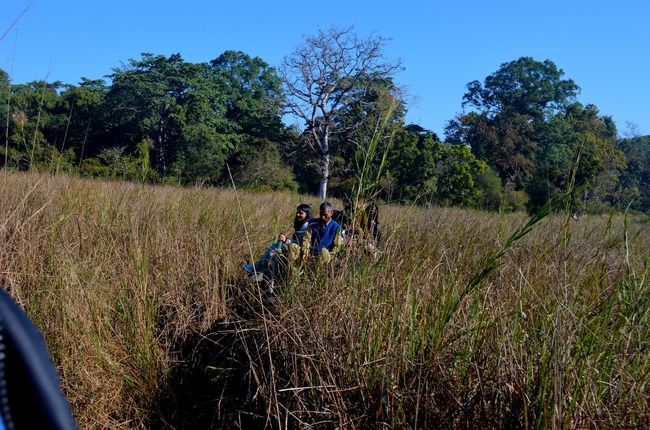 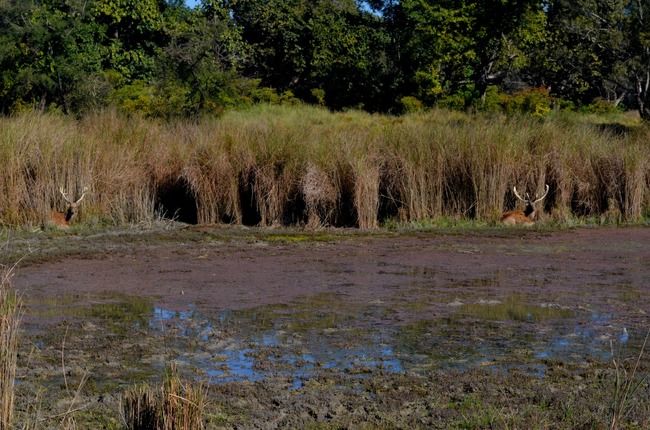 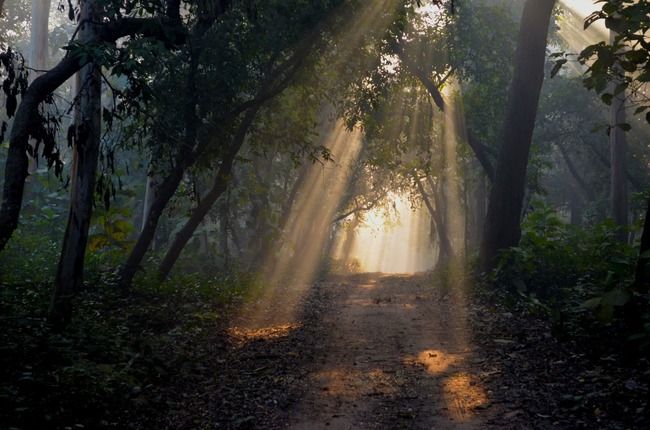 Termite hills that rise to tower and rule 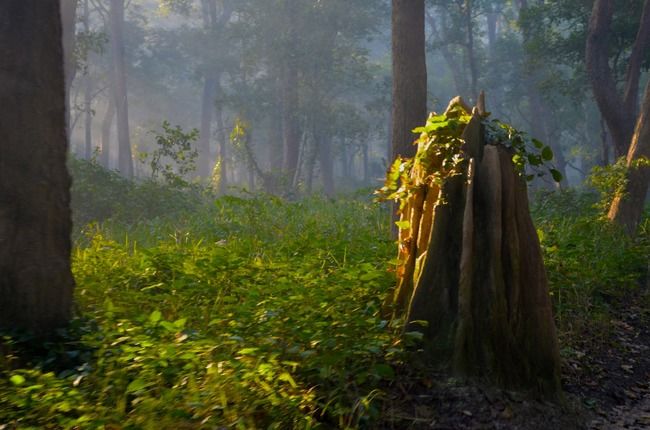 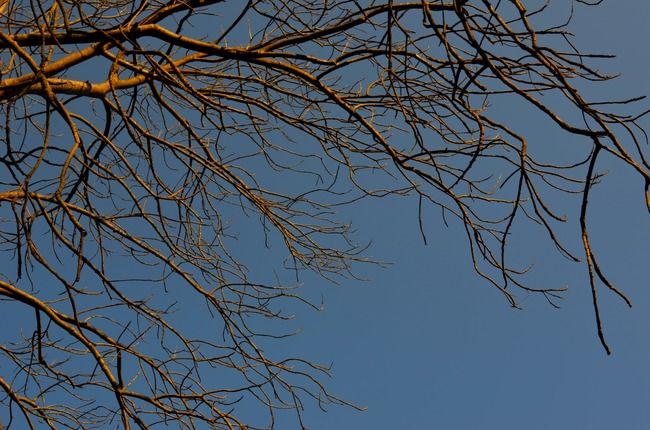 The adventurous trio from Delhi 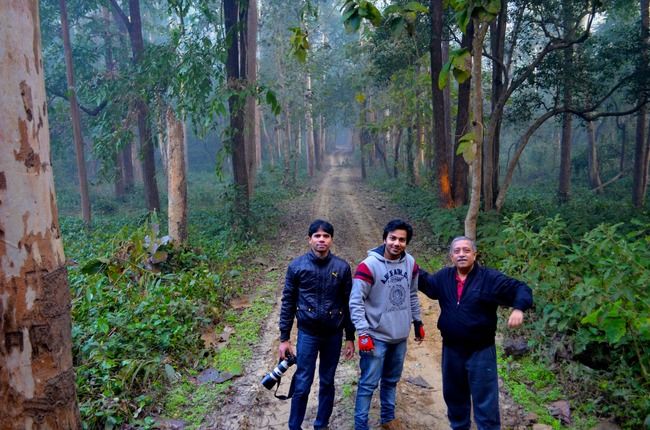 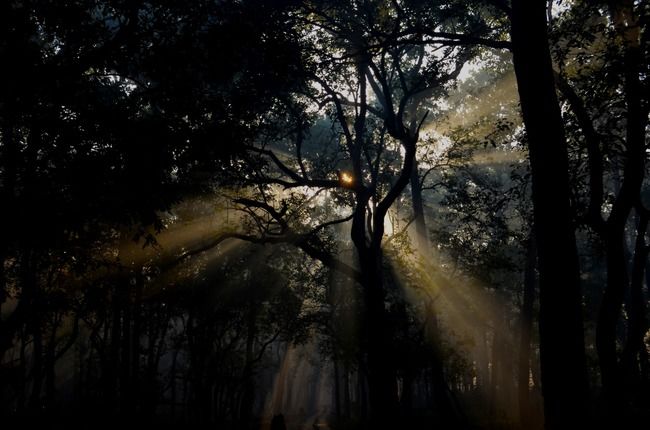 A foggy morning is so full of possibilities… there is intrigue literally hanging from every square inch around you. The entire world seems so far away despite being where it always has been. Even familiar objects loom large suddenly and the suddenness makes your imagination run amuck… and you see witches in trees and dragons in place of lively bushes! This is the sort of adventure I had on the morning of the sixth of February as we went on our way to the Dudhwa National Park.

‘You don’t need a horn in the forest,’ said Ashraf from WTI (Wildlife Trust of India), and then went on with a chuckle, ‘I remember a time when there was a tiger sitting right in the middle of the forest path and all we could do was to stop, remain alert, and wait for him to get up and move away!’

‘So, will we be seeing tigers today?’ one of us asked him.

‘Every morning is a good morning for tiger sighting, but tigers move fast and can cover more miles than we can imagine,’ replied Ashraf.

Later, when we reached the forest office of Dudhwa National Park and shifted from the covered SUV to an open jeep, the immensity of the forest came as a realization. We were told that the forest has tree-covered areas as well as wetlands and grasslands… and the animals that we were to look for could be just anywhere and that it is always destiny that leads a tourist to sight them.

‘The trees all around are Sal,’ informed our guide helpfully, ‘though on your way to the forest there was a mix of naturally existing trees and man-planted trees. So on the fringes you can find Teak too.’

The fringes, of course, are interesting places because it is there that most of the small villages are. That is where the human-animal conflicts take place. That is where most of the work of the 9 Primary Response Teams is. We are not talking of a small effort here. We are talking of over 69000 people being impacted in the 28 identified conflict hot spot villages. And if the cases of conflict have come down from 27 in 2008 to 11 in 2013, the effort put in by the Forest Department, WTI, and Aircel as the Corporate partner is worth an applause!

But let me back to my adventure… of course these knowledge bits happened throughput the day but the most interesting moments were when we came to within striking distance of a one-horned Rhino!

This Rhino wasn’t really agitated to have five humans on an elephant looking at him with strange devices in their hands that went click and whirr and click and whirr! Our mahout told us that Rhinos are generally shy and like other animals, avoid unnecessary conflicts. Even this one was there for just a few seconds and then hurried headlong into the 10 feet high grass and bushes and disappeared into the dark forest.

We were later informed that the Rhino Rehabilitation Project began in 1984 and that their strength is now 31 in this park.

‘Why rehabilitate Rhinos here in UP?’ I asked, though what I really wanted to ask was if Rhinos could be used to frighten away the goon elements from the State. Well, I was told that Dudhwa was being primed as one of the major back-up zones for the Rhino in case some major tragedy happens in Kaziranga.

‘This park has a designated 27 sq km area protected by wires that have a 12 V current pulse passing through them. This is enough to keep the Rhinos safely inside,’ informed an official, ‘though tigers are able to jump over the wires. The tiger is a restless animal and keeps moving in search of prey.’ By the way, the second phase of the Rhino Rehabilitation Project will see the installation of ‘camera traps’ all over. There will also be yet another enclosure for this animal and thus another 14 sq kms dedicated to their rehabilitation.

Now if you think if this seemingly armoured animal really needs protection, the answer is yes. Even the Rhino, like other animals that are now endangered, need resolutions. Only a few days back two Rhinos had a fight and one died. Obviously, the response teams had rushed to the spot and managed to save one. Yes, we did see the spot where that infighting took place and where the Rhino was finally buried.

But coming back to our adventure, let me tell you that though we were sitting on an elephant, the trees towered way above us and, at times, even the termite hill tops were within grasping distance. The bone-chilling moment came as our elephants sauntered out of the wooded area and into what everyone said were the grasslands.

‘Grasslands? How can sauntering over grass be bone-chilling?’

‘Well, when the grass blades rise to heights that can cover even elephants, it is time to get alarmed.’ So yes, all sorts of animals can be lurking in those thickly set grasses but our elephants plodded on creating a path through this seemingly invincible grass universe! There were times when I could see just the heads of my friends on the elephant a few feet behind us. Eyes carefully scanned the area to see if any animal movement could be detected. Our silence also meant that we were trying to listen to any tell-tale rustle betraying an animal, or more significantly, a tiger stealthily walking towards us.

And suddenly we approached a water body and saw a magar or a crocodile basking in the sun. I saw the magar twitch and think and then slowly and discreetly slip into the water to swim away.

‘Are magars afraid of elephants?’ someone asked.

The Mahout simply snorted a stifled laugh and said, ‘Animals don’t get into unnecessary conflicts.’

Well, this was great jungle philosophy and I loved every bit of it. Just some distance away from this spot we sighted two bara-singhas sitting some distance away from each other. ‘Both are males,’ said the Mahout, ‘and they are watching us carefully.’ We noticed the imperceptible movement of their eyes as they followed us moving from their right to their left and away.

‘Male bara-singhas sitting together in the forest,’ I chuckled, ‘and our SC is creating such a hullaballoo about human males wanting to live together.’ Well, as I said, the jungle does give you all sorts of insights.

Yes, we did sight the hornbill, alexandrine parakeets, a few other birds, spotted deer, a fox, and a lot of fresh tiger pug-marks.

Our adventure on a foggy morning also included watching the sun filter through the forest to create intriguing patterns and being perched on an elephant as it swayed through intimidating grassland and waded through a couple of feet of marshy land and even through innocent looking but crocodile-inhabited water bodies. Yes, the morning was adventurous!