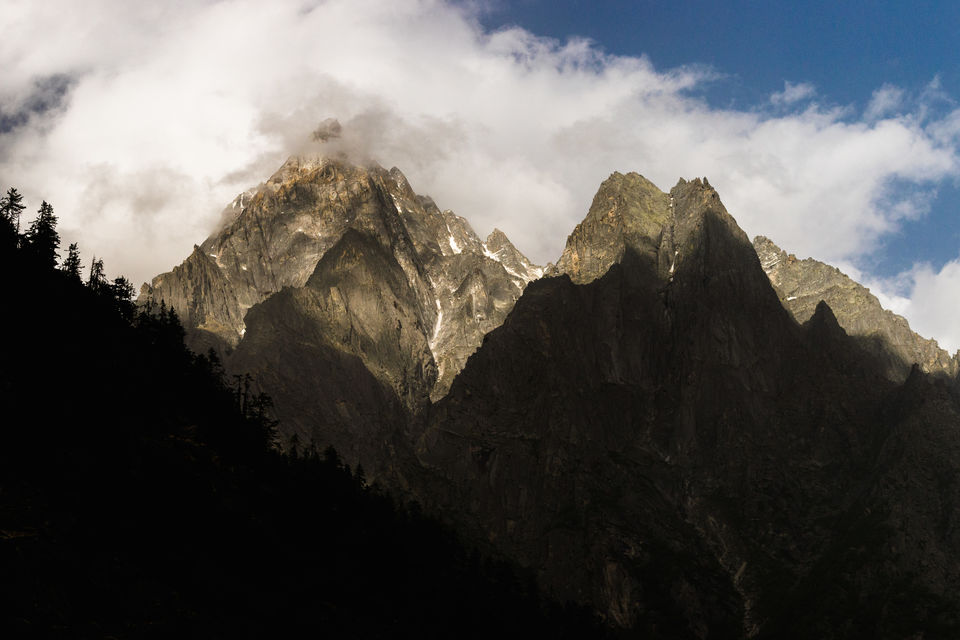 Have you ever seen clouds coming out of trees like smoke coming out of a chimney? That was the view we woke up to! The mist has cleared up and the views gave us a perfect start to the day. We could see apple orchards covered with anti-hail nets. As the name says, they are to protect the apples from hailstorms. That day would be the longest journey of the entire trip, hence we had a quick breakfast at the homestay, and bid goodbye for our wonderful hosts.

We have started our journey and within some time, river Satluj accompanied us, flowing in the opposite direction. As the day progressed, the mountains became higher, the valleys became deeper. That was like a transition to IMAX. We stopped at a small waterfall by the roadside to take in the beautiful views around. Meanwhile, the driver removed his outers, and took his car for a bath under the waterfall! We resumed our long journey, and half-tunnels also started appearing along the road. We stopped for the lunch at Tapri at 3pm as I was still waiting for my first sight of snow peaks. Tapri is a few minutes behind Karcham, the junction where the road bisects to Reckong Peo(subsequently Spiti) and Sangla Valley, the destination of the day. That is the place where Baspa river from Sangla joins Sutlej.

After the quick lunch, we resumed towards the next stop - Karcham Wangtoo dam. It was hard to discern as there was a lot of haze, but the towering snow peaks from far away distance started coming into our sight! The haze added to the mystical views and it was absolutely breathtaking! We started our last leg of the day towards Chitkul, with the views only becoming better every minute and with no doubt I can say Sangla valley is one of the prettiest in India. We had a pitstop at Sangla and had hot momos and chai in the wonderful weather. Sangla is the last place on the way to have decent mobile network.

We reached Chitkul in the late evening, and what a beautiful village it was! It was straight out of fairy-tale, and the pictures are not going to do justice to the atmosphere there! It was the last village on that road, and about 40km away from the Tibetian border. We had a hard time finding our home-stay as it was few hundred meters from the nearest road. They welcomed us with warm tea, and we dumped our luggage and went for a quick acclimatization walk as it was getting dark. They were local kids playing in the mud, and we had some fun time with them. We were wandering around until it became dark, and then came back to the home-stay and sat outside enjoying the chilling weather. We were waiting for our dinner and as were the other guests. In these home-stays, so you typically can't expect the family to serve all the guests at once. We waited for our turn, and had the dinner conversing with the host. He said many foreigners come there, mainly from Israel, as it costs less. That explained the number of foreigners we were seeing on our trip. He told us how the houses are built with alternating layers of wood and stones to keep them earthquake resistant. The dinner was simple with roti, rice, sabji and dal but their hospitality was amazing! We completed the dinner and headed back to our beds. No astrophotography was possible as it was entirely cloudy. Siva and myself again put alarms for midnight hoping for some clear sky. I woke up at 1am and subsequently at 3am, and only to be disappointed for not being able to see a single star, and went back to bed.