Exploring Chennapatna! The Land of Toys!

It had been a while, since I had ventured out on any trip. My work in Bangalore had left me drained out, with weekends too being spent at work. My eyes only saw tasks, to-do lists, status updates and emails spread across different digital devices. I needed to spend some time with myself. Maybe a trip, without having any responsibilities around the trip, where I could gaze and wonder at nature, without a time restriction or pressure to get back home. On a Saturday evening, as I was listening to music, I was thumbing through an archived edition of a 2011 Lonely Planet Magazine. In one of its one day trips, it listed Channapatna as a probable trip to do in a day. 53 kilometres from the city, for a small town flavour with some handicrafts and temples, made it worth exploring.

I decided that its better, I do this trip alone, since I just wanted to leave at the earliest. Coordinating between family and friends and finding the right time to leave, could possibly take the juice out of the trip. I live in the eastern edge of Bangalore, and Channapatna was along the South Western gate to the city. I knew, I’d have to brave 90-120 minutes in just getting out of Bangalore, moving from one end to the other, since i started after breakfast. My companions were Google Maps on my iPhone, the lonely planet magazine and radio on the car, to listen in during the drive. One constraint emerged straightaway, in that I knew that I had probably 4 hours of battery charge left on my iPhone 5, since i was going to be using data on my phone, while driving, so I had to reach Channapatna by a maximum of 1330 hours.

The drive started really, only when I crossed the NICE road junction toll, when hills gave rise to mountains, and the civilisation dimmed. I expected clear roads and less traffic, but I realised that Bangalore extends 30 kilometres beyond its borders, uptil Bidadi, which meant that the roads could never be completely empty, and I had to contend with some traffic. Here are some of the sights, I stopped to admire

Between Bidadi and Ramanagara- The road is dotted with hills, flanking the diminutive railway track. It would have been nice, if the local tourism department could point to where ‘Sholay’ was shot here. I would have loved if there were some secret paths to get to the top of a mountain. Best places to enjoy a little summer shower in Bangalore, if it happens. I was not able to find any.As I crossed Ramanagara, I stopped to give my family status on where I was. I found a candy seller walking by who was almost dwarfed by the pink candies all over.

I reached Channapatna, and found a place to eat, near the edge of the northern end of the town. The place I had lunch, was called Sidda lunch home, with little to write home about in terms of character, but the food was okay. I used the place to charge my mobile, while I slowly gorged on Tomato Soup, Masala Papad and one heavy bowl of curd rice. Curd Rice tends to incapacitate me with pangs of drowsiness, so I decided to leave my mobile at the restaurant, while it was charging to walk over to the nearby toy shops. Channapatna is known as the land of toys, where simple wood based toys are made, which are apparently safe for children, with little sharp edges or danger for kids. I picked up a little car and a bigger car for my son.

There was one toy that I picked up, each of its variants in resplendent green and yellow. I had a tough choice choosing between them. I picked up the green one and pointed this to the lady at the counter to enquire the price. She said, she does not sell those toys/pieces individually. These are sold in multiples of 3. So if ever you read this travelogue, and venture out to the toy shops in Chennapatna, do enquire, if any of these toys are available as a single piece. I will be happy to pick one up. Here go the inseperable trio of musicians.

I finally managed to sort out and pick three toys for my 2 and a half year son. He has learnt to recognise the giraffe in his play school, so I thought this is something he can relate to. The other 2 look like cute doggie herbie type cars to play with. It may not have the panache of a 'Hot Wheels', but it has the elegance of otherwise a simple wooden toy serving the purpose.

Once I was done with the toys, I hopped over to Nadi Narasimha temple, which was supposedly 1200 years old. For a temple that was that old, it had very few devotees, when I drove there in the afternoon. Maybe it had to do with the fact that most temples in India are rarely open between 12 pm and 4 pm. A travel write up in the Indian Express newspaper quotes the following- "The temple, as per the heredity priest Sri Shridhara’s account, was renovated about 100 or 200 years ago. Some recent records show that the ruler of Mysore Nalvadi Krishnaraja Wodeyar(1881-1940) patronised the temple by granting 12 acres of land for the maintenance of the temple".

The road leading to the temple, from the main road is a mud path road, that takes a diversion from a potholed road, soon after crossing a railway gate. Life is idyllic amidst the sugarcane plants and the coconut trees, and I stopped over for a short break, to observe the colours of the town. In my quest to observe the country side, I did miss the mud path diversion on the right, but luckily Google Maps, told me that not all is well with my route. Here are some of the images I had clicked while I was on a break of the little village that Mallur is(Near Nadi Narasimha Temple Road).

The villages in India have always believed in this level of automation, of scaring crows or animals away, thinking that a human is manning the fields. Not sure if this is indeed the most potent way of dealing with visitors from the animal kingdom

Smiling children get off on a trip with the family to some place close by. As adults, we've maybe got a thing or two to learn from these kids on smiling in our otherwise serious cloned lives.

Just loved the greens all around. Worth being bookmarked for an afternoon snooze point, after a heavy curd rice lunch.

In the absence of any kind of frequent transport, villages stay fit by walking the 2-3 kilometre path to the main road.

The path that I missed! The mud path leading to the Nadi Narasimha temple. The creamish white mud path with the greens made up for an interesting contrast. My car's tyres just about fitted on the road, but no real imminent danger of falling off the road.

Channapatna works as a quick one day trip on a Saturday morning from Bangalore, or a 2 day trip, if you don't mind going off the mud paths.

Bidadi is a small town on the outskirts to Bangalore enroute Mysore. 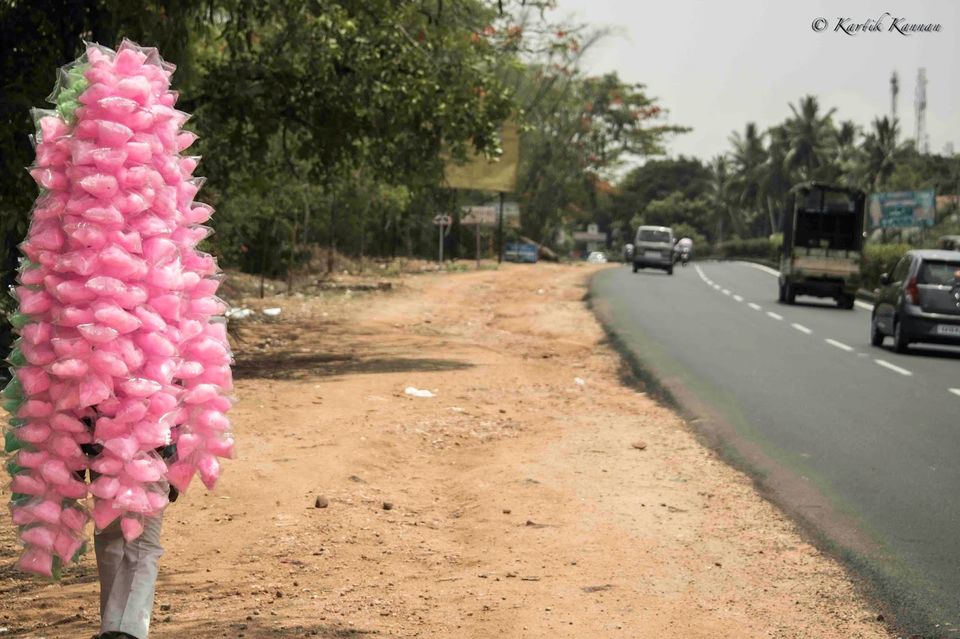 Channapatna is a small town in Karnataka between Bangalore , which is famous for housing hand made crafts, mainly in the areas of children's Toys. 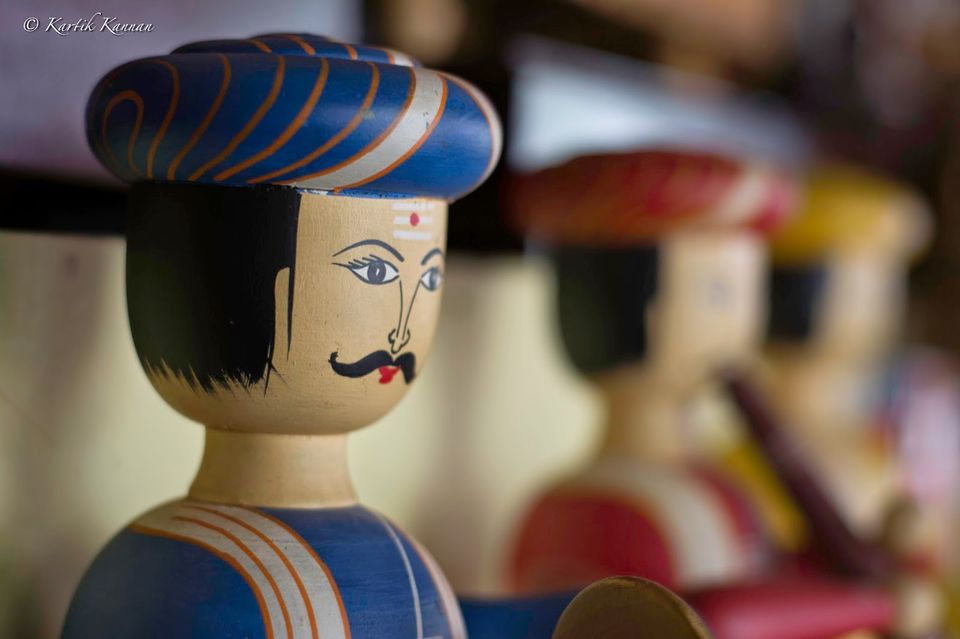 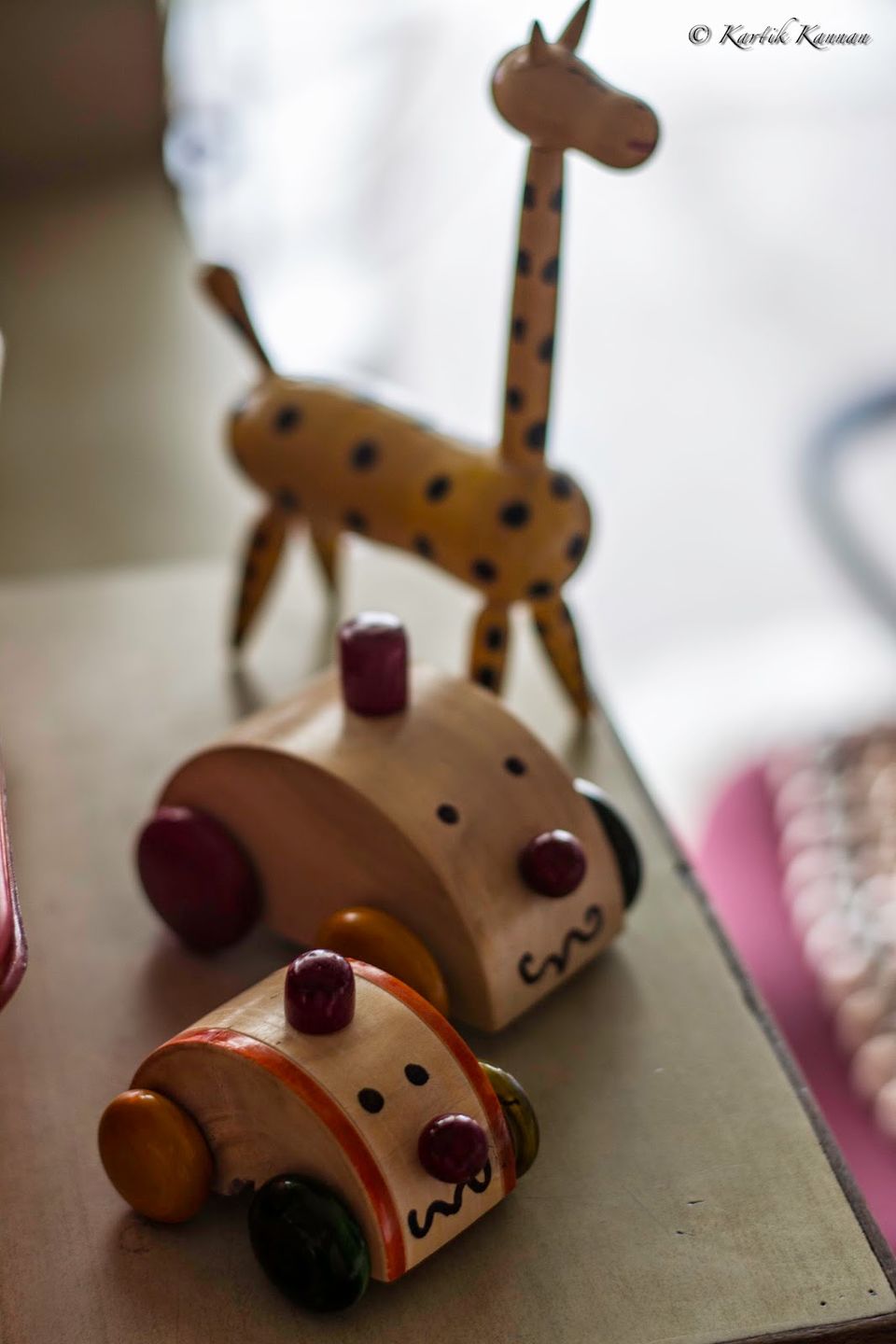 1200 years old. For a temple that was that old, it had very few devotees, when I drove there in the afternoon. Maybe it had to do with the fact that most temples in India are rarely open between 12 pm and 4 pm. A travel write up in the Indian Express newspaper quotes the following- "The temple, as per the heredity priest Sri Shridhara’s account, was renovated about 100 or 200 years ago. Some recent records show that the ruler of Mysore Nalvadi Krishnaraja Wodeyar(1881-1940) patronised the temple by granting 12 acres of land for the maintenance of the temple".

This was originally published at my personal blog katchutravels and if you want to be abreast of all my trip videos, do sign up to the Katchutravels Youtube and Katchutravels Instagram Channel.