Kumta Travel GuideKumta TripsIn And Around Gokarna On A Budget

In and around Gokarna on a budget 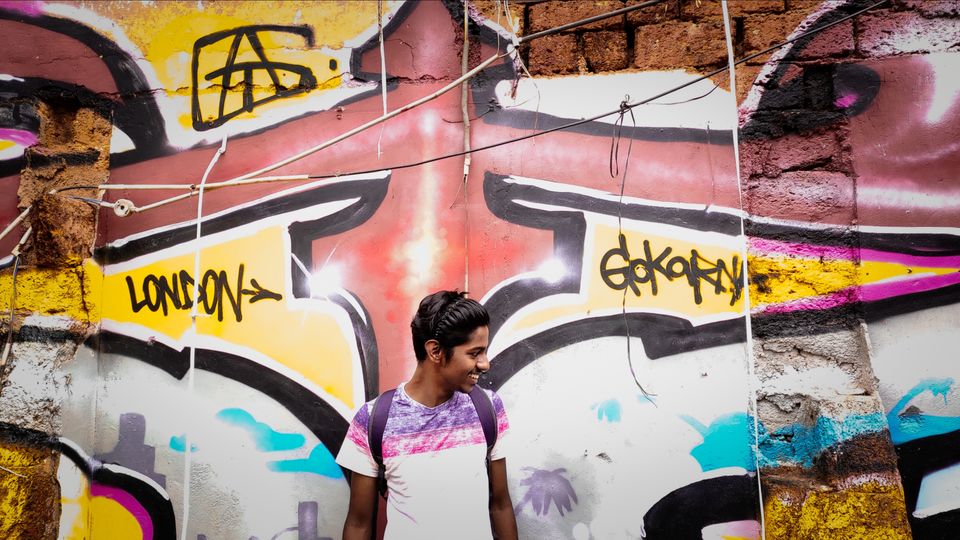 Trekking has always been a widespread disease among backpackers. Rough terrains, Rocky mountains, turbulent jetstreams are something we expect in a trekking. What if this whole concept is changed, this is what Gokarna offered us. These cliffshores offers the best and unique trekking experience you will ever get.

We left for Gokarna from Calicut in bhavnagar express which cost just 130rs/-. It will be a bit tiring untill you leave our state. Taking a general ticket is the best option for a budget traveller for such overnight journeys. We arrived at Kumta by 8 30 in the morning. Kumta- Gokarna buses are frequently available from the local bus station. After having some snacks for breakfast we left for Gokarna on a Karnataka transport bus which cost just 20rs/-. It merely took us an hour to get there.
Well here we are, amidst the loud and busy local bus station stood a group of five, who had no idea about what they were going to see. About half an hour into reaching Gokarna we were able to get a room which was the cheapest in the town. Prices of rooms can vary from 200-2000/- per night here. We only knew they were beaches and Gokarna was more like a mini Goa. It was already 1 pm and we had to find a good place to have lunch. Next up we set out on foot to the main beach of Gokarna hoping to find some nice hotels nearby. To be frank the main beach did not meet our expectations, lot of plastic wastes and leftouts were to be seen around and also stray dogs/cows are never a pleasing watch in a beach. Finally the half starved gang entered a shack located near the main beach. We were so hungry that we didn't take a look at the rate and it turned out to be the most expensive set of chapati and dhal I ever had. The food was great but it's not worth the money they put on it. Lesson learned-Never expect to get cheap food from the beach premises. After tasting the local cuisine we headed on to the next spot -The kudle beach. It took us about half an hour to get there as we had to hike through the rocky mountains along the coast. Kudle beach was completely opposite to what we saw at the main beach. Nestled in between the cliffs, this long beach offers us the true beauty of Gokarna. Numerous shacks and restaurants covered the entire length of the beach. Slowly reality was starting to keep up with our expectations. Only a handful of tourists were around as it was not the hour of the day. We walked around vividly grasping the essence of mother nature. Almost an hour passed by without notice, and it was time that we moved on.
Time elapsed quickly and we had to keep our butt moving so as to explore the next sand shore - The Om beach. The most unique and touristy among the
five, Om beach offers the best beach activities including paragliding, jet skiing and scuba diving.
This beach as its name suggest is Om shaped, which is something unusual to have for a beach, and that is exactly why this place turned out to be a major attraction. Since trying out the beach activities were way out of our league, we had to improvise our own sport and guess what, we started up with beach volleyball and played until the sun kissed the floor. In the end all of us were forced to leave the beach by the cost gaurds. It was getting dark and we had to get back to our room to freshen up.
The day has been a turmoil of events, it started on a low key and ended on a high note. From the deserted not so popular main beach to the dynamic and buzzing Om beach the scenarios kept changing.
We had already covered three among the five and our expectations had sky rocketed for the next two
waterfronts, and the real adventure was yet to come. 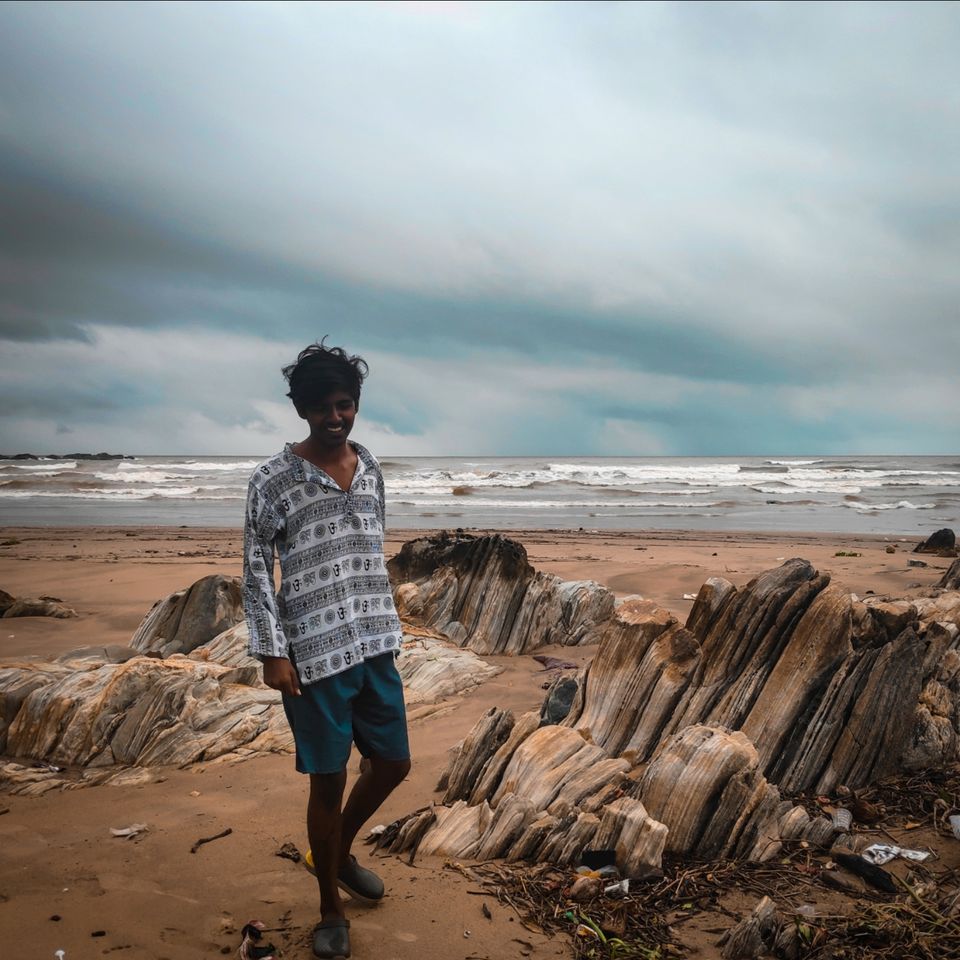 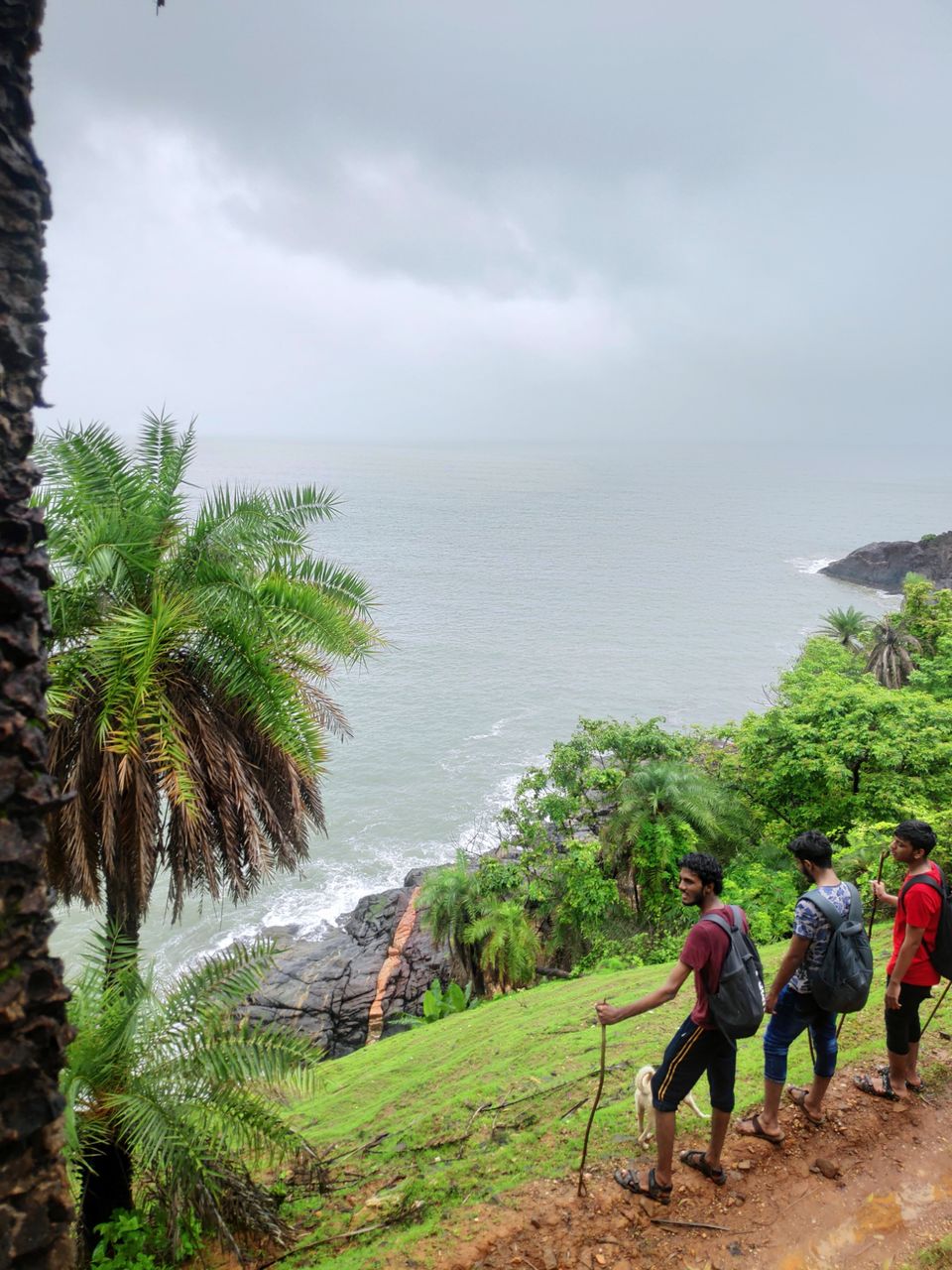 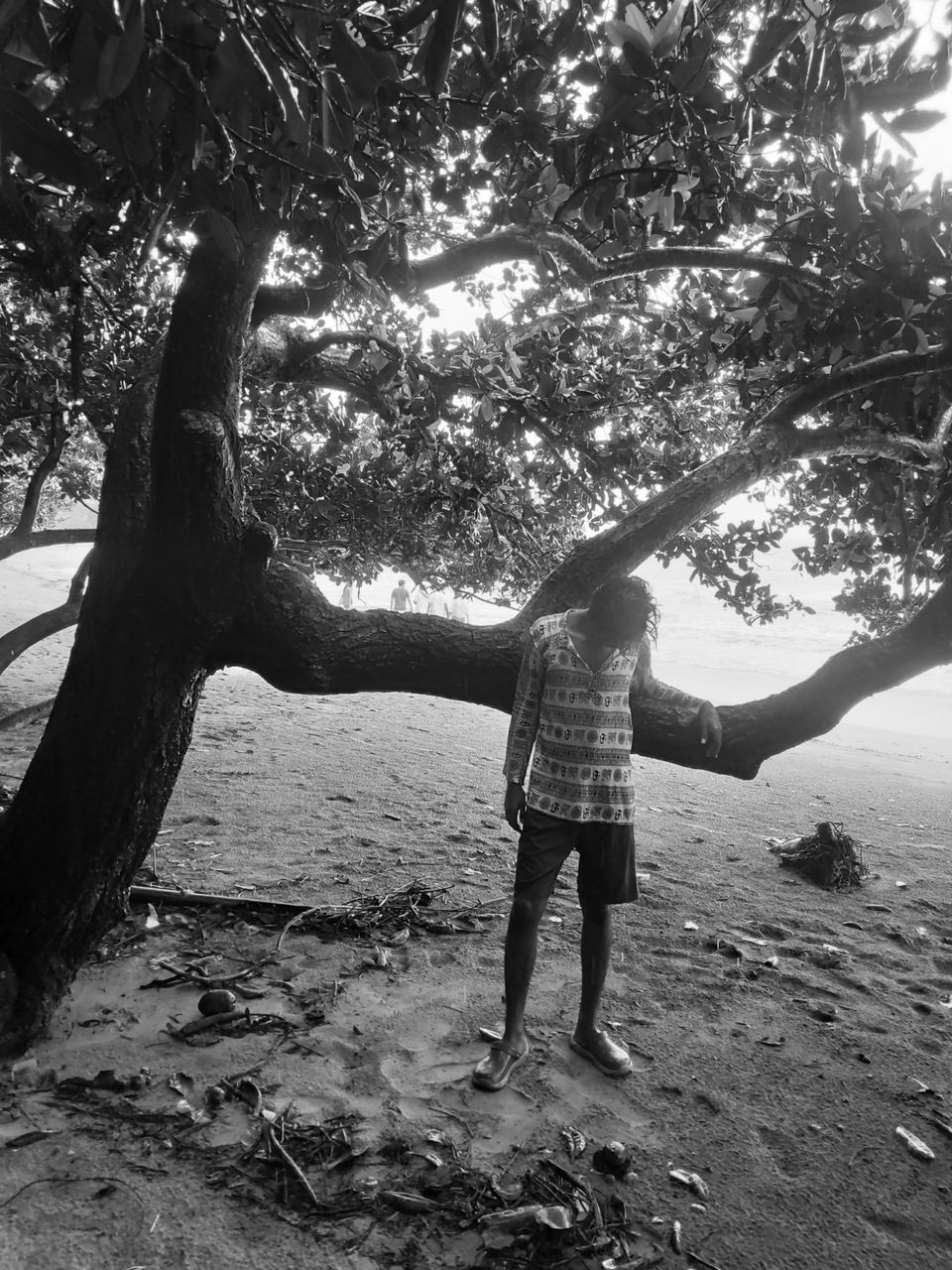 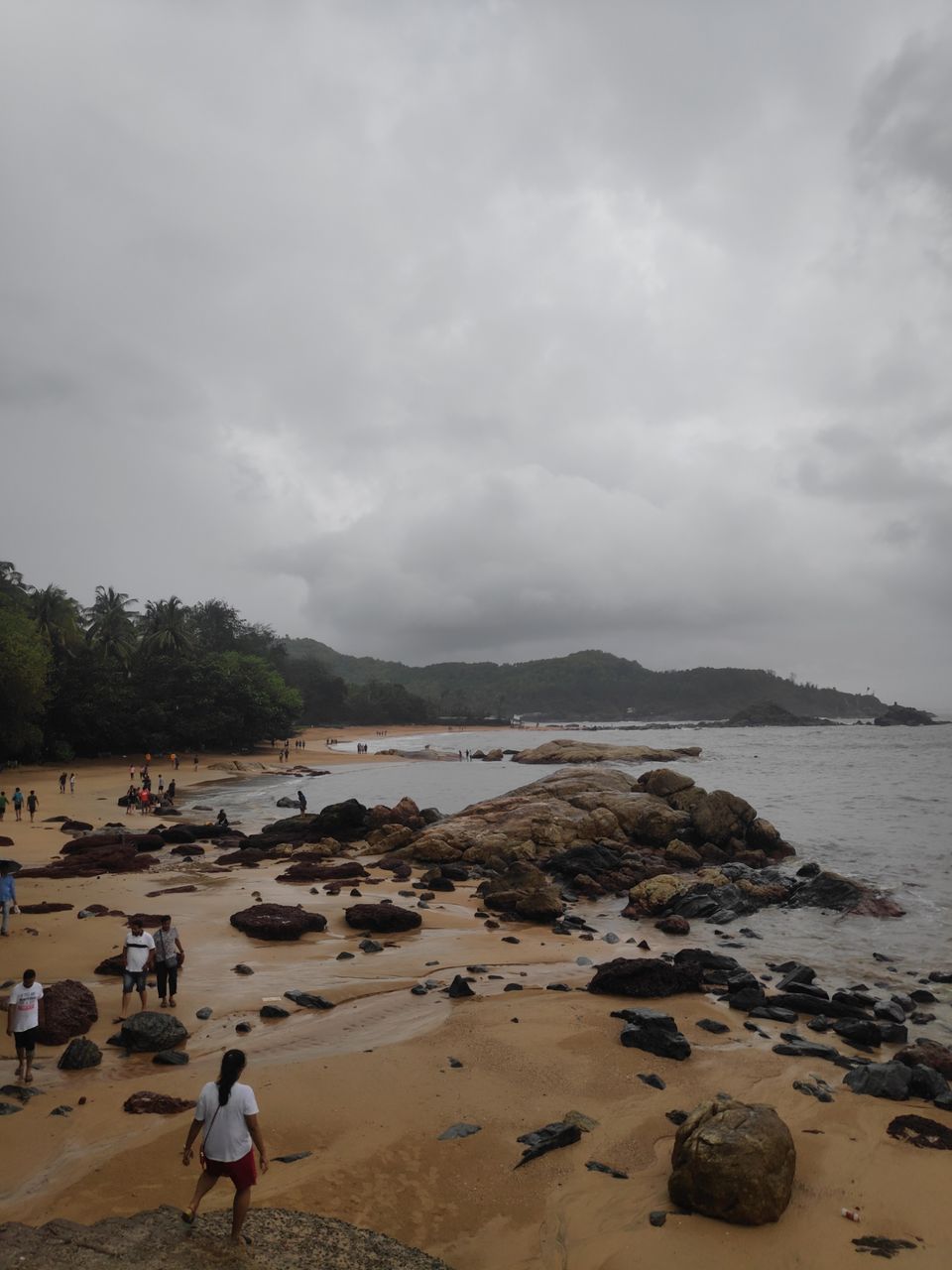 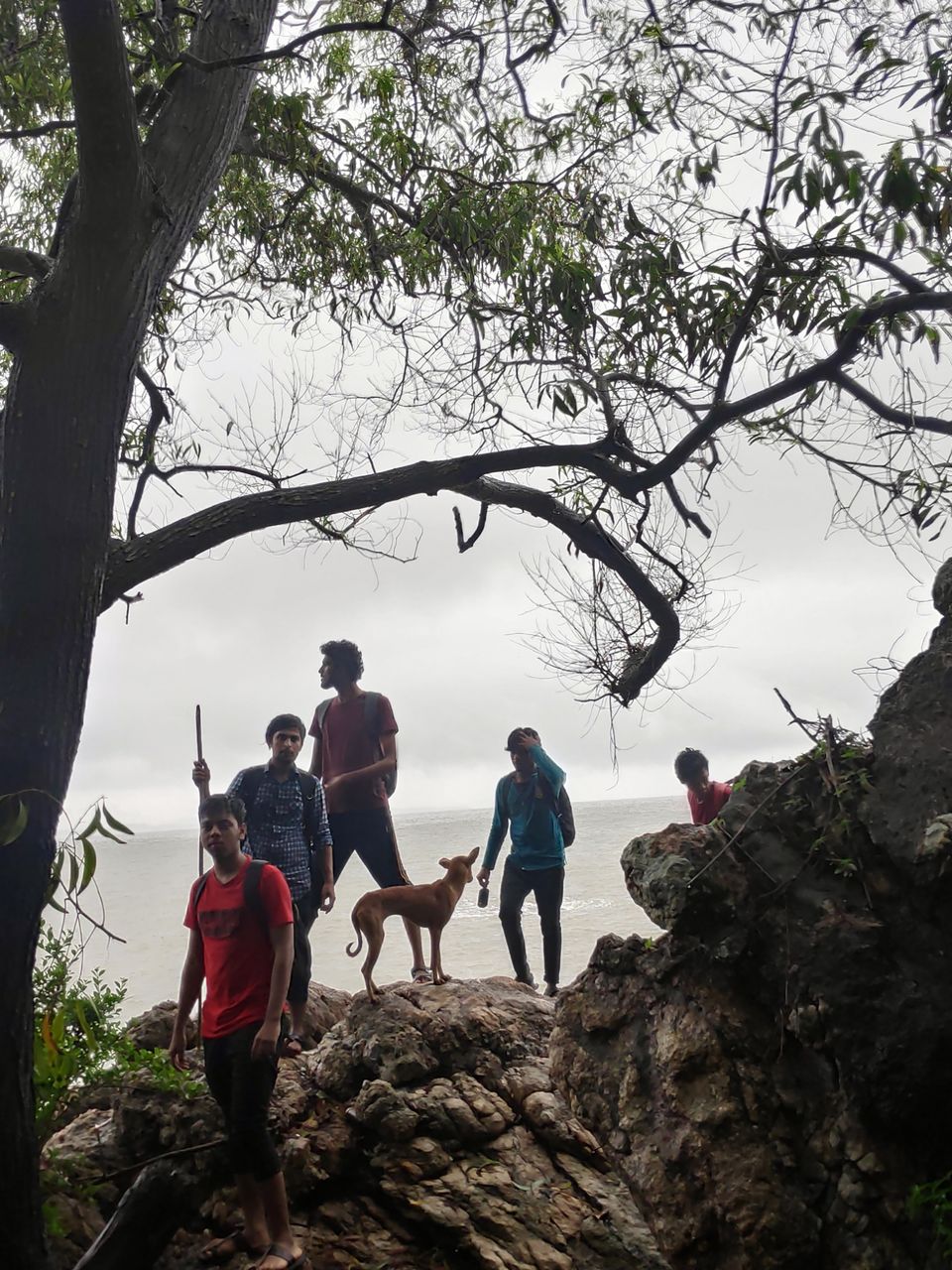 Waking up early was the biggest task we had the next day, it was cold and pouring down heavily in the morning itself. The Paradise beach and half Moon beach were our next destination, since these beaches were an offbeat and hidden place we were more eager to get there. After having a light breakfast we took an auto to get to Om beach from where we had to start our trekking. In the beginning it was a bit tedious as the morning shower created a swampy field and the route was not clear. Also there were no one else around and we had to find the path ourselves. The only company we had for the  whole time was a stray dog following us. After half an hour of wandering through the thick forest we arrived at a cliff. The beautiful deep blue sea spread beneath us overlooking the steep cliff. It was calm and quiet around, and we kept moving further through the tracks in search of the nearby  sandbanks. The rocky trails finally lead us to a small village alongside the cliff which was so small that everybody knew each other. Tiny dwellings spread around the valley and all the way up to the beach, The Halfmoon Beach. Smallest among all, this beach is home for all the hippies around. The erotic greenary around and the psychedelic paintings add up to get higher. There were a handfull of locals on the shore fishing in the rock cut gaps of the beach.  Baby crabs ran through the plain in joy never knowing they were causing problems around. The rough and adventurous trekking has already left us grasping for air and in addition to it the breathtaking views really kept us panting. We definitely needed to take a brake. All of us gathered around a huge stone and had some snacks, while I took some pictures of ourselves. The rain has stopped and the sun has come out. We then moved on to our next location slowly while capturing the glittering beauty around. The strong rain had created a lot of swamps and the small streams have been rejuvenated. The trek towards the Paradise beach was the most daring, the paths were not clear and we always had to keep the sea in our sight so that we won't get lost in the woods. There was nobody else around and the jungle was so silent that it started to get a little bit creepy. We still kept our pace,crossing streams climbing rock cut terrains and hiking steep valleys, unsure of where we were heading. Finally I saw an opening ,it was so bright that I couldn't see what was beyond, the silent nature has turned herself on, birds were chirping, the wind rushed by, and in front lay the pretty Paradise beach embracing us in her warmth. The sea was rough but we didn't mind that. It was so lonely that we had the whole beach to ourselves. All of us crashed the waves immediately. The salty air rushed through my hair, dipped in pure ecstasy we were already over the moon. It's by far the best beach experience I ever had, we were all living the moment and three words kept ringing in my ears - "where are we " 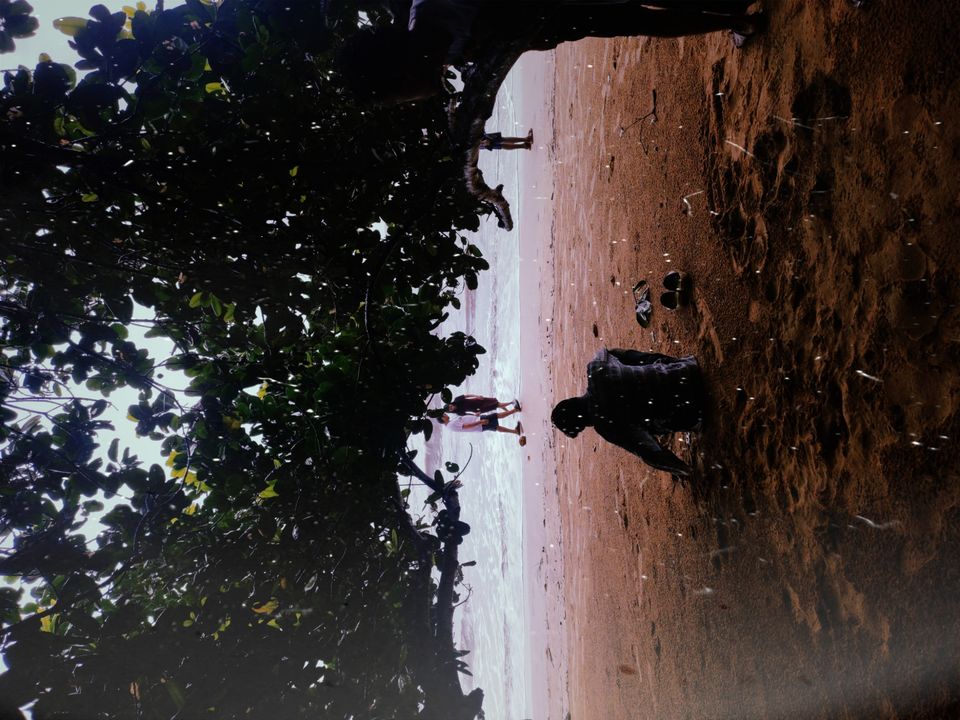 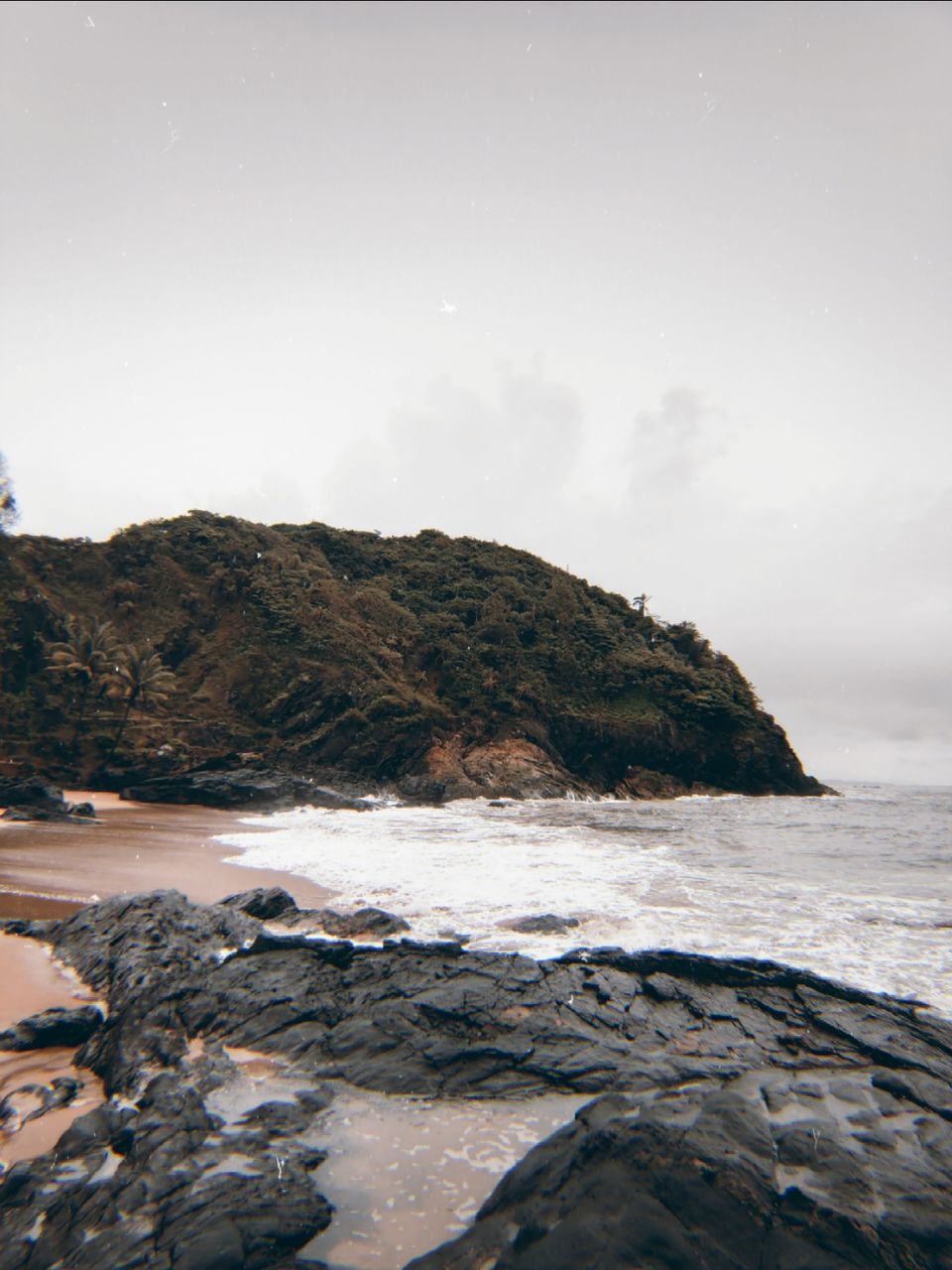 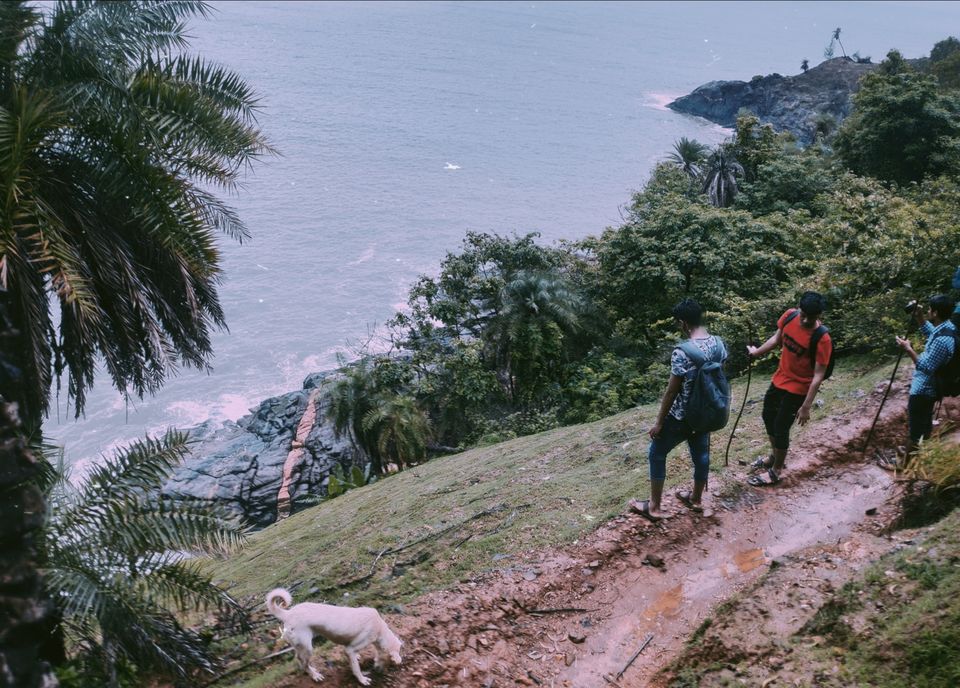 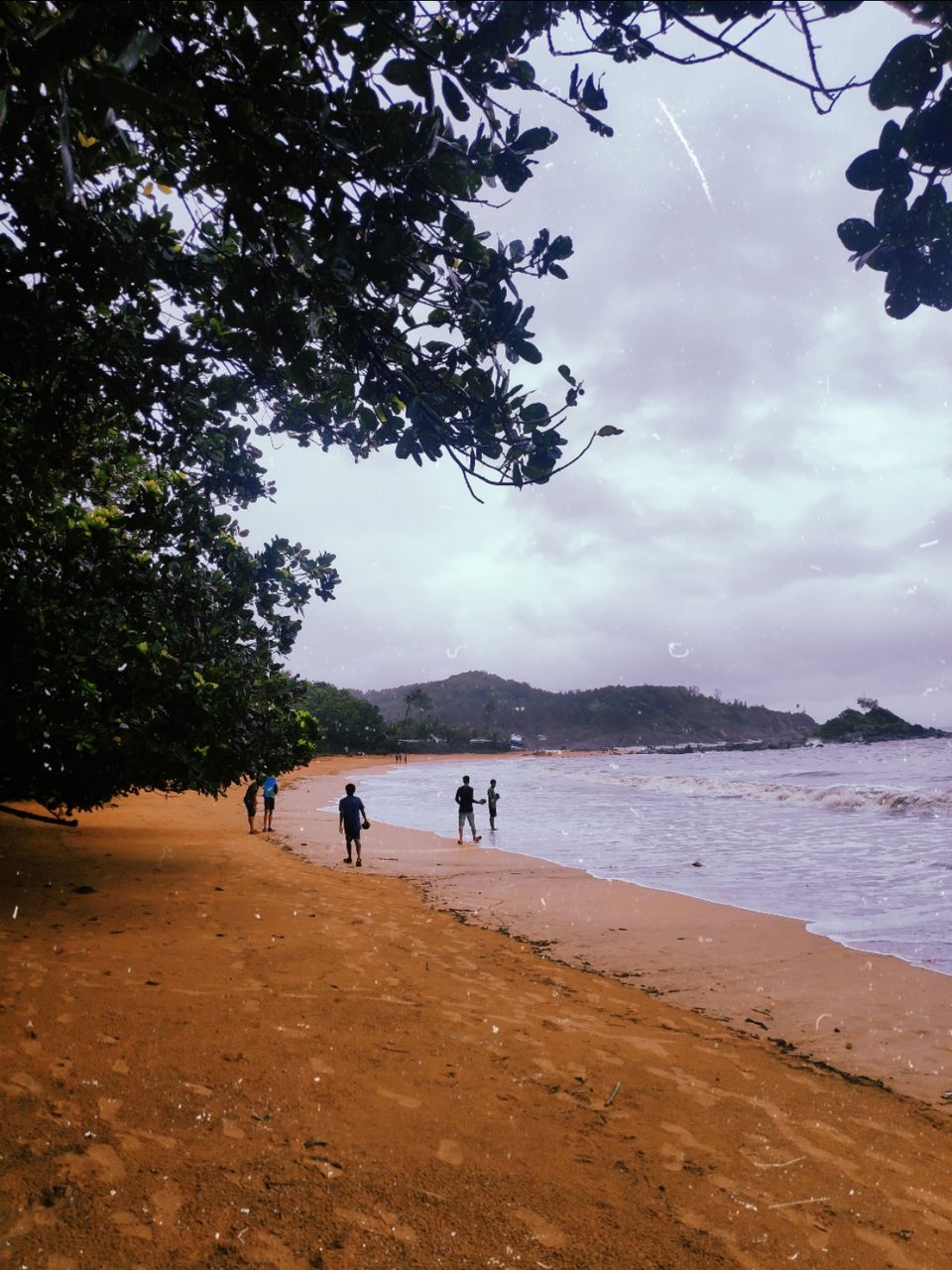 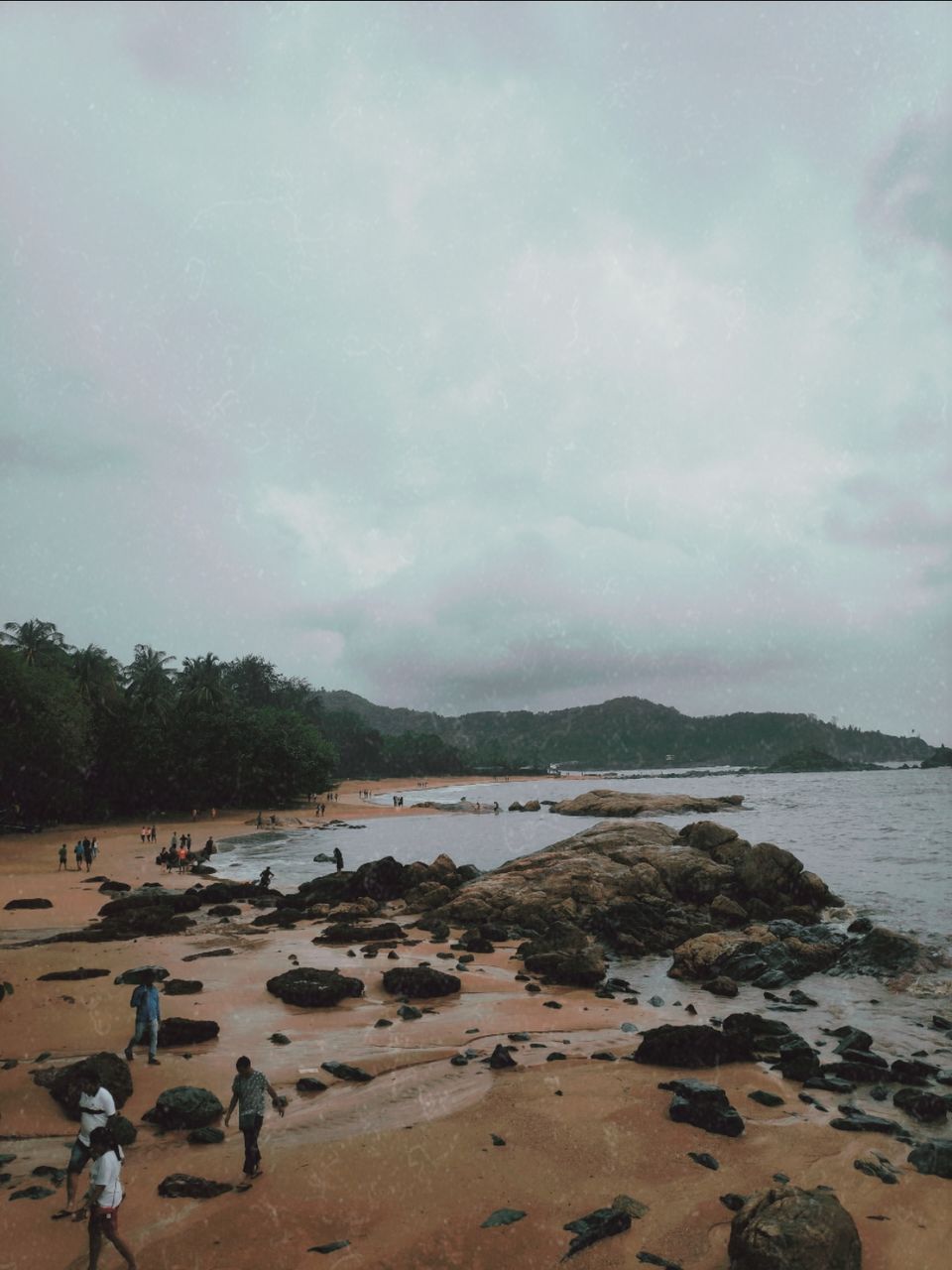