Waves are singing at Tranquebar

On the east coast of India, waves sing in the ears of a beautiful small village.  Songs sung by the waves always keep the village dreamy.  Once you step into this mesmerising beauty, you will be overtaken by the whispers of your heart, completely, which will find the tune of the Waves' Song !!!

This mesmerising village is called Tranquebar.  Here, the history mingles with present, with a significant aroma of Danish culture.  The name of this small village in the local Tamil dialect is, Tharangambadi, which literally means, music of waves.

# What is unique to Tranquebar

The history, that too the vibrant and vivid history, spanning a whole lot of 7 centuries, is being spelt by each nook and corner of this dreamy village.  You can observe a part of the history everywhere. There is nothing but antiquity, serenity and tranquility that you can witness and experience here.  People are so friendly. They love to chat with you. They even share their meal with you. So wonderful hospitality, that too without expecting anything in return. What a wonderful experience is it !  At Tranquebar, your soul will relax. That much wonderfully blissful is this paradise.

The Dansborg Fort, was built in 1620 by the Denmark envoy to the Coromandel cost.  It remained as the pivot of Danish presence in India till 1845, when it was sold to the British East India Company.  The Dansborg Fort stands at the eastern end of the Kings Street, facing the majestic  Bay of Bengal.  Set so close to the sea, there is hardly any dividing line between the fort and sea. There are cannons, mounted on top of the fort, speaking loudly about the era of fight and conquer.  The fort was in a dilapidated state, but now restored fully, after the Tsunami of 2004. The view of sea, from the top of fort is worth.

There is a small Museum, housed in the fort, where you can see some ancient paintings, potteries, whale bones, idols etc.

Once you come back from the top of fort and go close to the sea, you can see the ruins of a port like structure, protruding itself into the sea, on which folks climb and walk. It is built using bricks. These structures have withstand centuries of tides and winds !! It shows, how robust was the building technology of that era.

If you were wondered by the 5 centuries old brick bridge, then you will surely be humbled by the 7 centuries old Masilamani Nathar Temple, dedicated to Lord Siva.  The temple was built in the year 1306. Masilamani Nathar Temple situate close to the sea. Had there not been the granite rock wall constructed after the Tsunami of 2004, the waves would have been touching the walls of this simple but elegant temple.

Once you sit in front of this temple, facing the majestic sea, you will be engrossed by a blissful wave of holiness.  Spirituality is in the air. Just connect to it, by closing your eyes.  You will hear only the voice of sea waves. No other sound is there to break your unison with nature.  It's a blissful feel.

The temple survived  7 centuries of hard weather and a gigantic Tsunami. Its a miraculous structure, which silently narrates vivid stories of 700 plus years !!!

Here is the main entrance gate to Tranquebar.  Look at it. See how majestic and aesthetic is it. It was built in the year 1792. Those were the glorious days for this small coastal village.  The Danish trade flourished from Tranquebar then.  Along came the glory. The Danish people built a host of wonderful streets and buildings and filled those with life and culture.

The Centuries old Cemetery is overgrown by green bushes.  It is difficult to enter inside. But once you venture inside, there lies enormous graves. Deep buried are the mortal remains of people, who built this wonderful land with their sweat and blood.  The graves date back, well to the 1700s. Most of them are of Danish men and women.

Go  to the New Jerusalem Church on the Kings street.  Their lies the mortal remains of Bartholamaus Ziegenbalg, a German Missionary, who translated the Bible into Tamil and printed it in 1714. The Church is an architectural beauty to relish. The Danish Architecture can be viewed in its fullest glory at this Church.  It was built in 1718. It was affected by the Tsunami 2004 and restored completely by 2006.  Folks said that their is regular mass service every Sunday.

If you cannot access the overgrown cemetery, don't be disappointed. In front of the New Jerusalem Church, lies the graves of a few Danish people.  One of the tombstones read that it belongs to Charlotte who died on 17 September 1819 at the age of 27 years.  The grave of Sophia Frederica Cordes, died in 1817 at the age of 21 years and some other graves are also seen there.

However, these are not the most interesting part of these graves.  Then, what is it? Read it below !!

One among those graves have that very significant and imperative symbol engraved on it in a bold stance !

Yes, the symbol of two bones and a skull !!

Yes, you are right, the Symbol that clearly marks the Pirate's Grave !!!

I had never seen a Pirate's grave before in India.  I am not sure, whether there is any other Pirate's grave in India, so prominently marked as this one.  May be there, or may not be there. However, it was a big chance to stand in front of one at Tranquebar.

Fishing boats, resting on the shore tells yet another tale. The story of ever winning fishermen of the coast. They are the brave heroes.  During the Tsunami, hundreds of Tranquebarians lost their lives. Huts, houses, churches and schools were washed away or demolished in the gigantic waves.  But, Tranquebar survived all these vagaries.  They fought the disaster, in a very resilient way.  They restored everything to the original glory- including their lives.  Though the loss of their soulmates were hard to adjust with, they fought that bereavement and grief, with an innate urge to survive. They succeeded in that. They are leading their normal lives now, after recovering completely from the disaster.

# How to reach Tranquebar

Tranaquebar is located in the Nagapattinam District of Tamilnadu, India. It is 119 KM away from Pondicherry, 284 KM from Chennai and 13 KM from Karaikkal by road.

Nearest Rail head is Mayiladuthurai which is 29 KM away from Tranquebar.  Train journey from Chennai to Maryiladuthurai takes four and a half hours.

Nearest Airport is at Chennai.

# Where to staty at Tranquebar

Tranaquebar has very limited options for overnight stay.  Three well maintained heritage properties are available, but the price per night is on the higher side though justifiable.  All the three of these properties, housed in 17th century buildings, emanate an aura of antiquity, coupled with modern amenities.  If you are on a budget, some other stay options are also available to suit your budget.  However, the availability of rooms is very limited, so it is advisable to book in advance.

# What to eat at Tranquebar

The local cuisine is enjoyable.  Dosa, Idly, Sambar and Chutney makes a delicious breakfast.  These are served even during evenings at local eateries. Lunch is a main course of cooked rice accompanied with Sambar, vegetables, pickle, curd and papad.  You can enjoy freshly cooked sea food also. Other continental cuisine options are also available.

Any time during the year is good for a visit to Tranquebar. But be informed that, summer from April to July is extremely hot, which may go up to 40 degree Celsius on some days. The Monsoon season from August to October experiences rain, with heavy rain during some of the days.  During heavy rains, it may be difficult to enjoy the charm- but it has a different kind of beauty, if you like it. The weather condition is very favorable during the winter from November to March.

Ruins of an old port, extending to the sea, on which you can still walk

The grave with Pirate's symbol embossed on it !!!

The New Jerusalem Church, built in 1718 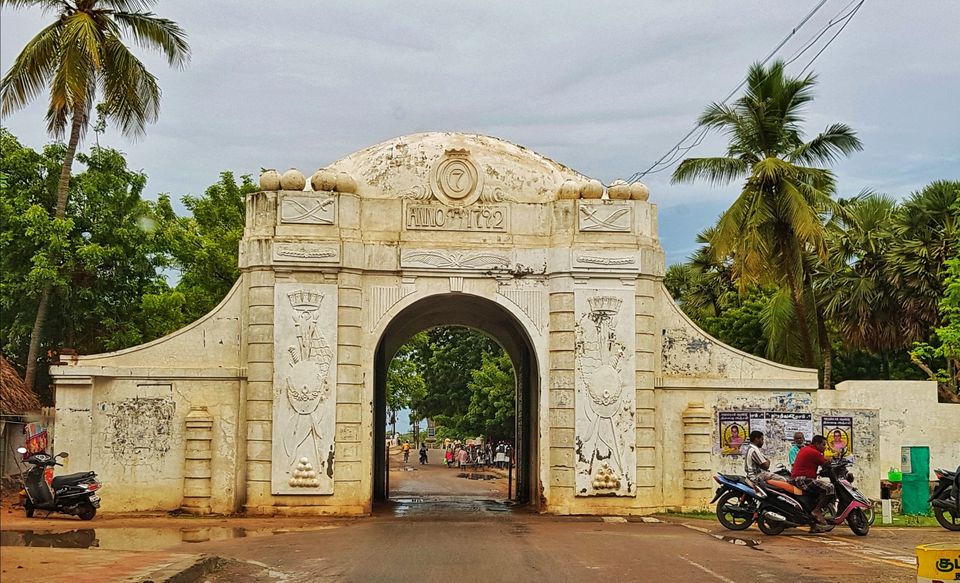 The Painting, exhibited in the Museum

Folks sale the wavy sea in this

The Cannon mounted atop the fort

This Heritage building is a hotel now