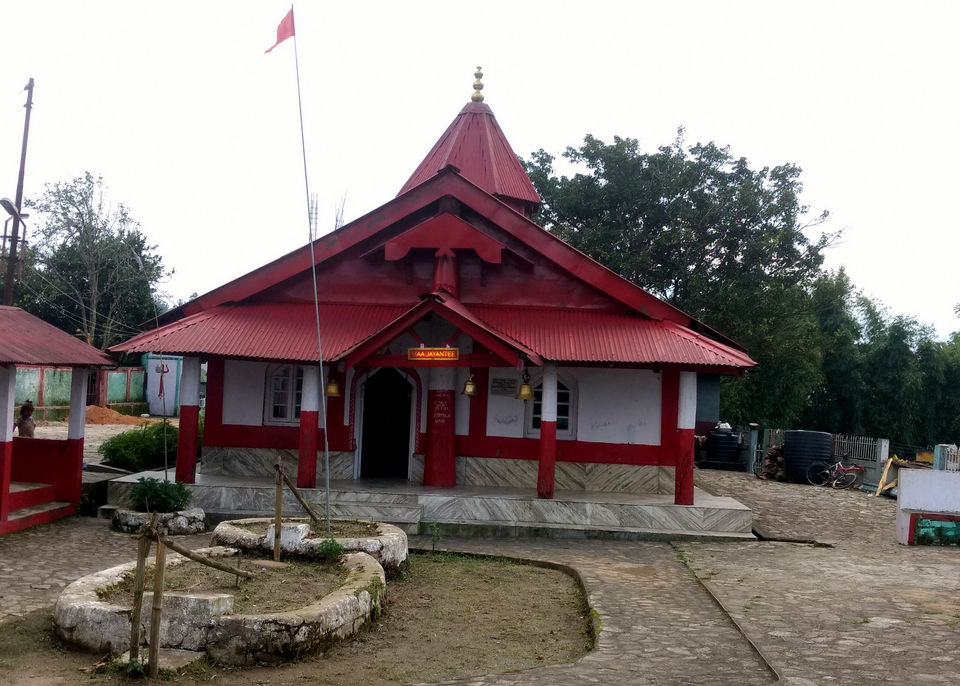 Before I begin this, I would like to state that though I aren’t extremely religious, I believe and respect in all the Lords and Religions and don’t intend to hurt the sentiments or disrespect any one or a sect. If I happen to offend anybody through this, Sincere apology!

“Durga Temple? Guys, there’s a temple here!” I told in amazement on reading a sign board in the Nartiang Village while heading to the Monoliths.

“Yeah! So?” said my friend (with an obvious expression like it’s no big deal). “So, I guess this is a tribal belt and a majority of the population is converted Christians, having a temple here means it has some history behind it” and that is when we decided to check the temple out.

So after being amazed and mesmerized by the Monoliths, we left in search of the “Nartiang Durga Temple”. It took us over 20 minutes; we couldn’t find the temple in a “5 minute long” village! After several detours, the Google maps had finally got us stranded outside a deserted “Officer Bungalow” and just when we had given up and sat back in our cars, entered a person who didn’t look local from the region and guided us to the temple.

Blessings come in various shapes and sizes and this little temple of the divine is a place where you get a mix of goose bumps and feel truly blessed to have visited it. Nartiang Durga temple lays in the Nartiang Village of Jaintia Hills in Meghalaya. Built in 15th Century, It happens to be a very important and auspicious place of worship for the Hindus as it is one of the 51 Shaktipeeths.

What is a Shaktipeeth?: A shaktipeeth is an important temple of Durga or the Shakti (Godess of Power). According to the Hindu Mythology, Devi Sati, the wife of Lord Shiva had leaped in a “Havan Kunda” (Blazing fire to perform rituals) at her father’s palace during a grand ceremony to avenge the disrespect shown to her husband Shiva by her father Daksha. As a result the ceremony got impure and cancelled and Devi Sati was burned down to death. This got Shiva extremely angry and he took her body on his shoulder and started the dance of anger- Tandav Nritya. The entire universe trembled for ages while Shiva performed this dance and was extremely destructive. To save the universe and Calm Shiva down, Lord Vishnu took his Sudharshan Chakra or flying disc and cut the body of Sati into pieces which fell all over the world. The places where these body parts fell are known as ShaktiPeeths. There are 54 Shakti peeths, 51 of them lying in India.

Apparently, Sati’s Left thigh had fallen at this Spot in the Nartiang Village of Jaintia hills thus coining the name Maa Jayantee or Jayanteshwari. It is believed that the Jaintia King Jaso Manik married the daughter of the Hindu Koch king who introduced and influenced Hindu religion in this region. She is said to once have a dream about the Shaktipeeth and witnessed Devi herself asking for the erection of this temple. It was then; a small basic temple was constructed at this point whose maintenance responsibility was later taken over by Ramkrishna Mission of Cherrapunjee.

Since the locals of Jaintia kingdom weren’t aware and familiar with the Puja rituals, a priest family was invited from Maharashtra and till date the same family performs all the rituals and is in charge of the activities at this auspicious temple. Today, Pt. Uttam Deshmukh, belonging to the 29th generation of this family performs rituals here. He is a gem of a person and a delight to talk to.

The spookiest thing about this divine place is that Human sacrifice was being made here to praise the deity till around 100 years back. The constant efforts of the British, this inhumane practice was abolished and as on this date a goat adorned with a human mask and a dhoti is sacrificed on important Puja dates like the Maha Ashtami and Kali Puja etc. It is said that the alter where the sacrifice is made is connected to the river Myntdu flowing downhill of the temple and once a person was beheaded, the head with the blood would roll down and fall in the river and the priests considered it an “acceptance” by the Goddess! The same sword is used for the sacrifice from centuries till date.

So basically on the first look this was a regular small temple with red tin roofs and small area outside with an excellent location and view but has an amazing history and is of immense importance. What amazes me is that this one lies less than 200 KMs from Guwahati and we hadn’t ever heard or read about its existence while another Shaktipeeth, Kamakhya lying in Guwahati city receives flocks of worshippers and devotees from across the globe!

So many Myths and Mysticism! I was stunned and amazed to have stumbled upon a ShaktiPeeth while casually traveling across Meghalaya. As it is believed, maybe the deity wanted us to visit and thus called out for us!

When you visit Nartiang for offering your prayers, don’t miss out on acknowledging the immensely beautiful scenery you are going to drive through. Meghalaya is known as the abode of clouds and the driving through the mist and green hills on perfectly pitched roads is travelgasm! Also, give a visit to the Nartiang Monoliths, Wahiajer church and Thadlaskein Lake all located around the village. Don’t miss out the awesome local fruits and berries found at small roadside shops here.

Nartiang is a village lying around 27 KMs from Jowai and 65 KMs from Shillong. This beautiful village was the summer capital of the Jaintia kings. It is home to World’s largest Monoliths and explorers and travelers often visit here to witness the grandeur.

Now the drive to Nartiang is extremely scenic! We crossed the beautiful village Wahiajer and stopping by at one out of its two beautiful churches and watching a football match for a while, we left towards Nartiang. The most amazing thing about Wahiajer is that it was powered by solar lights! I hadn’t heard of this village ever before and neither did Google give me much information about this squeaky clean tiny little hamlet of beautiful people! Each house, no matter how small had a few fruit trees ranging from oranges and berries and pears etc. The single lane road worked as an aisle to solar panels on both sides and the village outskirts had plenty of rice paddy, potato and cabbage farms! It seemed like they didn’t depend on the outside world for anything at all.

Post Wahiajer, we drove across what I would call a Paradise… Riding the smooth single lane road and romancing the innumerable curves on them fringed by lush green paddy fields and tall trees and we reached Nartiang.

It is amazing to walk down the aisle with these giant rock monoliths around you. Monoliths exist throughout the length and breadth of the Khasi and Jaintia Hills. However, the biggest collection of monoliths or Megalithic stones in one single area is to be found north of the Nartiang market. These consists of Menhirs (Upright stones) Moo Shynrang and Dolmens (flat stones in the horizontal position) locally known as Moo Kynthai. Within the perimetre of these Megalithic collection stands the tallest Menhir erected by U Mar Phalyngki a trusted lieutenant of the Jaintia King to commemorate his victory in battle. Most of the Nartiang Monoliths were erected between the 15th and 18th Century.

A little ahead on the NH44 towards Jowai, located is the man made Thadlaskein lake. A scenic lake where you can just awe at the nature and be enchanted about what this little hamlet, Meghalaya has to offer!!

So, pack your bags, head North-East and remember, Meghalaya is more to itself than Shillong and Cherrapunjee. Don’t just be content on witnessing waterfalls and valleys this time! Go ahead, visit the deity and be mesmerized by its history!